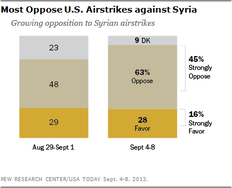 Sixty-three percent of Americans are now opposed to using military airstrikes against Syria and the percentage of Americans who are opposed to such an action has surged substantially in just the past week, according to a new survey from the Pew Research Center and USA Today. The survey of roughly 1,500 people, which was conducted between September 4-8, finds that the percentage of those who opposed jumped from 48% to 63%.

As the President prepares to make his case through a series of TV interviews today — including the PBS NewsHour’s Gwen Ifill — and a prime time speech tomorrow night, the latest numbers underscore the magnitude of the problem he is facing in persuading the country to follow his lead: Forty-five percent say they are not just opposed to the idea, but strongly so.

Among Republicans, the lift is especially heavy. Seventy percent of those who identify as Republicans say they are opposed. And 66% of independents are opposed as well. Those numbers have all climbed by significant margins in the past week. Among Democrats, 53% are opposed.

Some other important numbers for the White House to consider in advance of the interviews and the speech: Fifty-four percent of Americans now say President Obama has not yet clearly explained why military strikes should be used.

The surge of public opposition comes even as six out of 10 Americans believe the U.S. must take some kind of action to register its disapproval of the use of chemical weapons in Syria. Here’s a link to the survey, which also include new job approval ratings for the President and results on how the public sees presidential authority versus congressional authority when it comes to military action.