There’s a man walking around the planet. He’s not doing it to set a record, he’s not on some religious quest, he’s just doing it to tell our stories. Likely, never in human history has something like this been undertaken, with this much chance of success, this large of a following, and never has one person given us a view of this planet and the people on it, in a way it may never be seen again.

TWITTER CHAT: Talk to the man who’s walking around the world

Paul Salopek is on what could be described as one of the longest slowest journalism projects ever. The Out of Eden walk is a journey that will take him at least seven years, likely through dozens of countries and trace the tale of our migration a hundred thousand years ago from the cradle of civilization in Africa to the tip of South America.

We spoke to him on the Newshour before he started this adventure and recently caught up with him in a rural corner of the Republic of Georgia to try and see a sliver of what he sees and get a glimpse into this amazing adventure.

Our stories are the same

As he described in our first report from Georgia, above, the stories Salopek encounters are not so different from one another. Whether he is talking to a herder in Ethiopia or a truck driver in Georgia, they love their families the same, they dream for better lives for their children in the same way, they share similar joys and sorrows. Most avid travelers can tell you this, that there is far more that unites us than there is that keeps us on one side of an ideological fence or the other side of a geopolitical border, but the stories Paul is able to gather organically are a bit different partly because he is able to in the most quintessential form of journalism: discovery.

For example, I parachuted into this tale, spent a couple of days with him and his walking partner Dima in rural Georgia. I had a goal, meaning I knew the assignment I was there for, had some background on most of the the people and places I would see, but Paul’s method is much closer to what we all get into this craft for — true discovery. He often doesn’t know where he is going to sleep the next night, much less who he will meet along the way. The destinations aren’t the story, the people are. 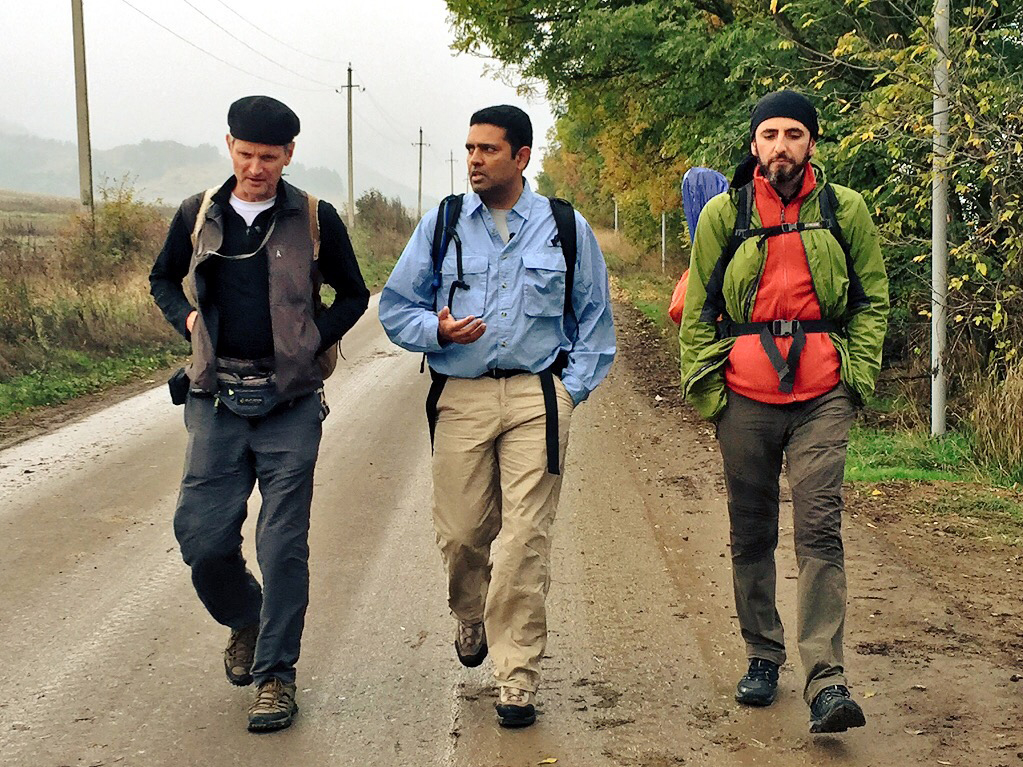 Flanked by Paul Salopek and his Georgian walking guide Dima Bit-Suleiman. Photo by Morgan Till

When I was walking and talking with Paul, even just for a couple of days, I noticed things slowing down. He describes walking with a certain a-b, a-b rhythm, similar to a heartbeat. It’s something any hiker can relate to, but there is also something gained by what I could call the presence of the moment. While I tried to document parts of our walk with the camera in my smartphone, I was increasingly grateful that it was in airplane mode, and more often than not happier when it was stuck in a pocket so I could just notice what was around me with the lenses in my head, capture audio through my own ears, along with the smells and tastes of life in the middle of pretty much nowhere.

View from above the citadel in Dmanisi, Republic of Georgia. Photo by Hari Sreenivasan

Disconnecting means different things to different people. I wasn’t a monk in silence, and as Paul and I discussed for a few hundred yards, there are so many new tools of the trade that can be both additive and subtractive. This walk was not live-streamed through Periscope or Facebook Mentions, but we did sit down at the end of our respective days and fed the social media engines of our respective institutions. I uploaded images to my Facebook page, he to his editors at National Geographic. Technology allows him to calculate exact distances, speak to schoolchildren on the other side of the planet, (or to join our Twitter chat Friday afternoon). Salopek will quite possibly walk completely through the entire life cycle of a social media platform. When he started the walk Snapchat was still gathering momentum. Who knows what the next new thing will be in 2020 when he’ll still be walking.

Walking through valleys, across streams, and over hills with Paul and Dima, each time we reached a ridge line, a vista, I kept wondering what the first people who looked at this wondered. As we found out in Dmanisi, Georgia, chances are that our ancestors who lived at this site 1.8 million years ago might not have processed information the way we do today, but I wonder if it was the same spirit of curiosity that kept them walking, toward the next horizon, to see what was just around the next corner, over the next hill. There might be a bit of them still left in us. 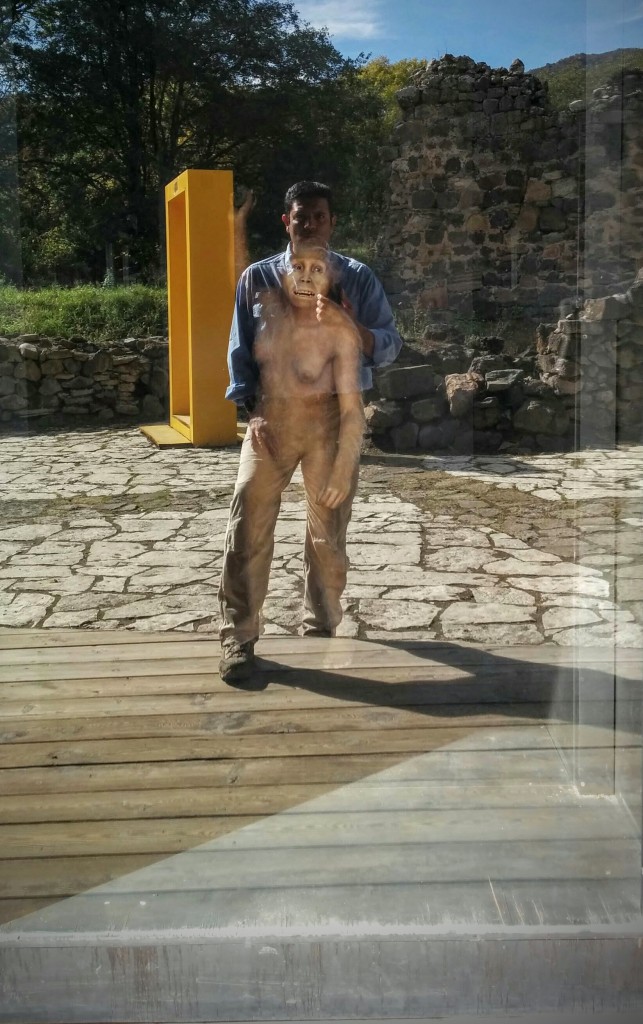 Rendering of what the inhabitants of Dmanisi could have looked like 1.8 million years ago. Photo by Hari Sreenivasan

At each “milestone” (about every 100 miles) he asks three questions of the first person he meets: Who are you? Where are you from? Where are you going? How would you answer those questions? Try in the comments section of this post.

On Wednesday night we aired part two of our stories with Paul Salopek from the archaeological site of Dmanisi.