Cities around the world hit the lights for Earth Hour 2015

Following the warmest year on record, cities around the world are going dark Saturday in observance of Earth Hour, a World Wildlife Fund initiative meant to raise awareness for climate change.

For the first time this year, Cameroon, the Central African Republic and the Democratic Republic of Congo joined 169 other countries and territories across 24 time zones to turn out the lights between 8:30 p.m. to 9:30 p.m. local time.

“We do this [turn out the lights] each year to call attention to the need for climate action now and the brighter future that lies ahead if we act together,” U.N. Secretary-General Ban Ki-Moon said in a video address. The United Nations will go dark for an hour on Saturday night. 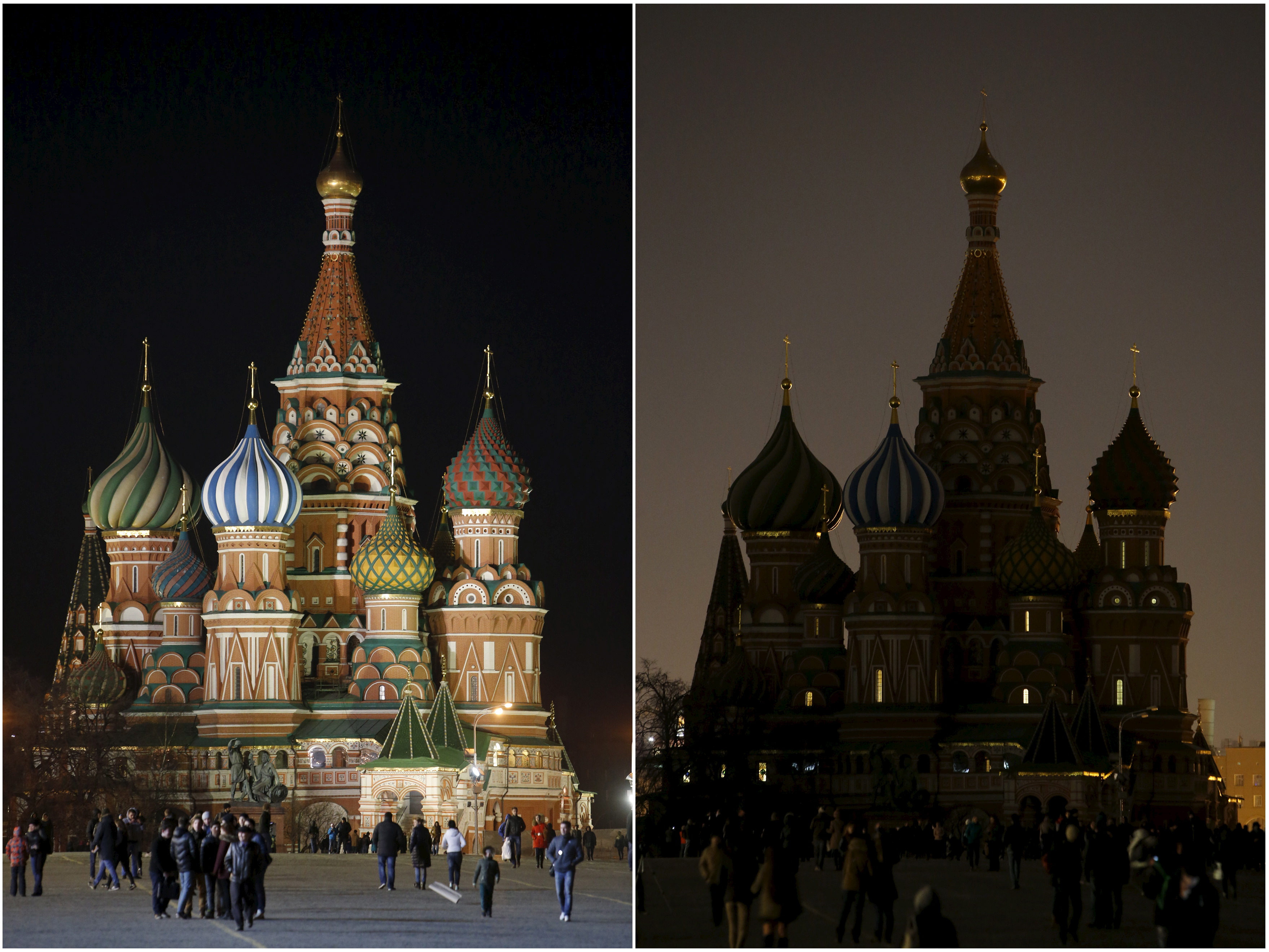 A combination picture shows St. Basil’s Cathedral before (L) and during Earth Hour in Moscow March 28, 2015. Earth Hour, when everyone around the world is asked to turn off lights for an hour from 8.30 p.m. local time, is meant as a show of support for tougher action to confront climate change. REUTERS/Sergei Karpukhin

The largely symbolic event, which began in 2007 in Sydney, Australia, is meant to demonstrate the impact people around the world can have when joining forces on a particular project at a specific time.

And it has given rise to more initiatives and produced real results that combat the effects of climate change.

In 2014, officials in Ecuador banned plastic bags in the Galápagos Islands, months after the WWF Galapagos and members of Galapagos National Park and the Galapagos Government Council led a campaign in support of such a ban during Earth Hour 2014.

That same year, participants in Isfahan, Iran, used the event to highlight the politics of water mismanagement by creating a 3,000 square feet Earth Hour logo in the dried out riverbed of the once flowing Zayanderund River that is a major artery for the city.

#EarthHour celebrates the one thing that unites us all – the planet pic.twitter.com/O1zvzv1vGI

According to the National Climatic Data Center (NOAA), the average temperature in 2014 was more than one degree above the average for the previous century, making it the highest since records were first kept in 1880 and exceeding those set in 2005 and 2007.

Left: A combination picture shows the Brandenburger Tor gate before (top) and during the Earth Hour in Berlin March 28, 2015. Earth Hour, when everyone around the world is asked to turn off lights for an hour from 8.30 p.m. local time, is meant as a show of support for tougher action to confront climate change. REUTERS/Hannibal Hanschke