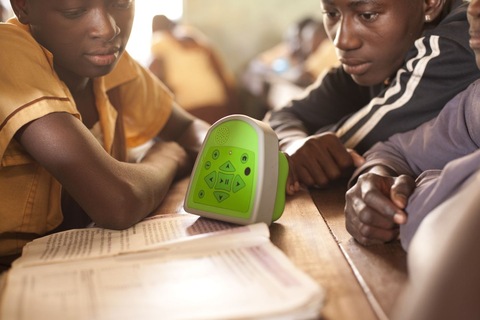 Students in Ghana listen to a Talking Book. All photos courtesy of Literacy Bridge.

On a warm spring evening in 2006, software consultant Cliff Schmidt decided to take a walk near the hotel where he was staying for a conference in Atlanta, not yet knowing that what he would stumble upon would alter his life’s path.

Schmidt, who had previously worked at Microsoft and served in the Navy as a nuclear engineer, wandered into an unfamiliar neighborhood. He found himself at the national historic site where Martin Luther King Jr. is buried.

Schmidt paused before Coretta King’s grave and then stepped in front of Dr. King’s. “That was the moment. It was BAM!” recounted Schmidt. “In an instant, I had this feeling that if he could speak to me he would say, ‘You should be doing something more with your life.’ I walked way and had no idea what I would do next, but I had no doubt it would be different.”

Cliff returned to his home in Seattle and began to read everything he could about global poverty. With a background in technology, he was drawn to the international nonprofit One Laptop Per Child which provides rugged, low-cost laptops to children in low-income countries. But he soon started to wonder whether there might be a need for even more low-cost, low-tech devices to spread knowledge in poor areas of the world. 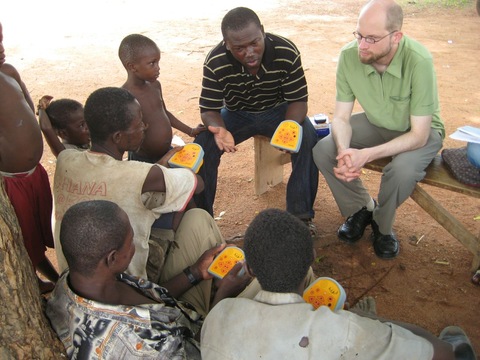 Schmidt (on right) in Ghana.

During a volunteer trip to Ghana, Schmidt brought along a few “gadgets” to share with the people he met. “I started thinking about greeting cards that play audio tunes,” said Schmidt. “I wondered, ‘What’s the markup on that? Maybe $1?’ I brought some of those to Ghana. And I also brought digital audio recorders, and children’s audio learning books to see what worked. I was paying attention to what was working and not working.”

Schmidt said he initially considered developing an audio device that would help illiterate people learn to read and improve their vocabulary. But after meeting with a number of agricultural and health officials in Ghana, he saw a different need. They told Schmidt they could use a way to better communicate important messages to villagers, like how to improve agricultural yields and prevent diarrhea in children.

Schmidt recalled what the officials told him; “We give them information but we can’t get to them more than once a year. You can’t take notes when you are illiterate. Wouldn’t it be great to capture the information we’re trying to share.” 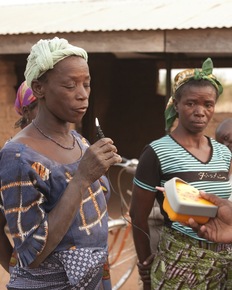 A woman records a message.

So in 2007, at the age of 36, Schmidt launched the nonprofit Literacy Bridge, and with the help of a team of technical, engineering, and financial supporters, he developed the Talking Book. It’s a handheld, battery powered, audio playback and recording device — basically a mini computer — which is engineered to withstand harsh environments.

Users follow simple audio prompts to listen to recorded messages from local experts on agricultural and health topics. Information is recorded in native dialects. Users, with no prior experience using technology, also can record their own messages on the device and connect two Talking Books together to transfer recordings. The target user: individuals with minimal or no literacy skills, living in rural areas without electricity or Internet access.

Schmidt says he began selling Talking Books to large NGOs in 18 countries. But he soon realized that the communities where the devices were introduced by other organizations, villagers often were left to figure it out on their own, and they weren’t benefiting from the technology. “I realized that what Literacy Bridge needs to offer is not a product, but a full solution,” explained Schmidt. “If you really want to affect change, you can’t just depend on technology.”

Schmidt decided to refocus his efforts on the country which first inspired him to create the Talking Book — Ghana. Working with the country’s Ministry of Health and Agriculture to record important content, Literacy Bridge is now providing Talking Books to 13,000 people in the northwest region of country, Schmidt said. 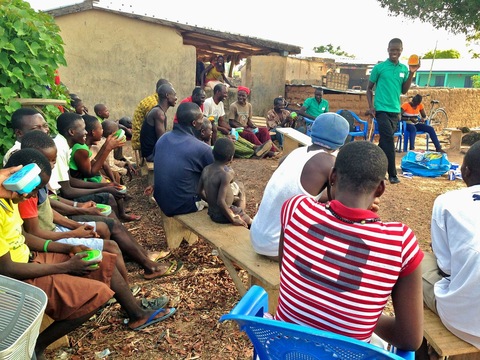 When the devices are introduced in a new community, Literacy Bridge staff spend time to ensure villagers understand how to use them. And they return every few weeks to monitor how Talking Books are being used.

Schmidt stressed that supplying the device isn’t a one-way street; every six weeks, staff get feedback from the devices about what people are listening to, which recordings are the most popular, and how far users get through the recordings. Songs about health are particularly popular. Some of the recordings inform users about the kinds of seeds to use, and the best agricultural practices to follow during certain times of the year.

During a trip to Ghana last November, Schmidt participated in a celebration for National Farmer’s Day. “I talked with a farmer who was 26 years old,” recounted Schmidt. “He harvested 15 bags of peanuts in 2011. Last year, he harvested 28 bags. He said that was just from information he got from the Talking Book.”

That farmer won a prize for being the best peanut farmer in his district, which included nearly 100 villages. And it just so happened that the farmer’s wife was seven months pregnant when she got ahold of a Talking Book. She listened to a health recording that stressed the importance of breastfeeding exclusively during the first six months and delivering in a hospital. She told Schmidt that she followed the advice from the device. “That, for me, was personally very rewarding,” said Schmidt.

Kentaro Toyama is a researcher at the University of California, Berkeley, who studies the intersection of technology and development work, and serves on the Literacy Bridge advisory board. Toyama said technology can indeed help, but it is not the most critical component of development work; human relationships are.

“Young people between the ages of 15 to 30 cannot stay away from technology,” said Toyama. “There’s something about the human psyche, especially at that age, that is excited about technology. But there’s also sometimes resistance. Older people, even if they aren’t fundamentally against it, can be worried that they’ll break it. Or they don’t feel they have the education to meaningfully engage with it. And many have seen other NGO programs come and go with little impact. That’s why human engagement is so critical.” 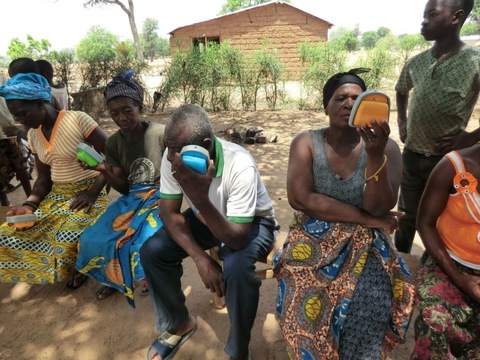 Residents try out the Talking Book.

The Talking Book is manufactured in China for about $25 apiece, but Schmidt hopes to get the cost down to $12 next year when he plans to ramp up production. He currently receives funding from private individuals, and computer chip manufacturing companies.

Schmidt said he hopes to reach 100,000 people in Ghana by 2015 … a goal Martin Luther King Jr. would undoubtedly have found worthy.