LONDON (AP) — British police officers’ decision to break up a weekend vigil for a woman killed after being abducted while walking home at night in London has touched off a national debate about the government’s power to restrict protests during a public health emergency, as well as during more normal times.

Images of burly officers handcuffing women who gathered Saturday night to demand authorities do more to protect them has fueled anger about heavy-handed policing and raised concerns about plans to expand the government’s ability to restrict protests.

“Protest is not a gift, it’s a right,” said Gracie Bradley, interim director of the human rights group Liberty. “Yes, it can be limited for certain reasons, but those limitations have to be necessary and they have to be proportionate. And what we saw on Saturday was a wholesale failure of the Met to uphold that duty, to facilitate protest and to actually listen to what protesters were saying, which is that we don’t feel safe in public space.”

Lawmakers on Monday are considering legislation that would expand the government’s ability to curtail noisy and disruptive demonstrations, as part of a sweeping crime bill that also extends sentences for serious violent and sexual offenses and toughens penalties for those convicted of defacing statues.

The government says the laws covering demonstrations need to be changed in the wake of last year’s Extinction Rebellion protests in which environmental campaigners sought to shut down central London.

“There is, and will remain, a balance to be struck between the rights of the protestor and the rights of individuals to go about their daily business,” the government says. “However, there are instances where individuals at a protest behave in a way that causes unjustifiable disruption or distress to others.”

The debate comes after the death of Sarah Everard, a 33-year-old marketing executive whose body was found March 10, a week after she disappeared while walking home. A serving police officer has been charged with her kidnap and murder. 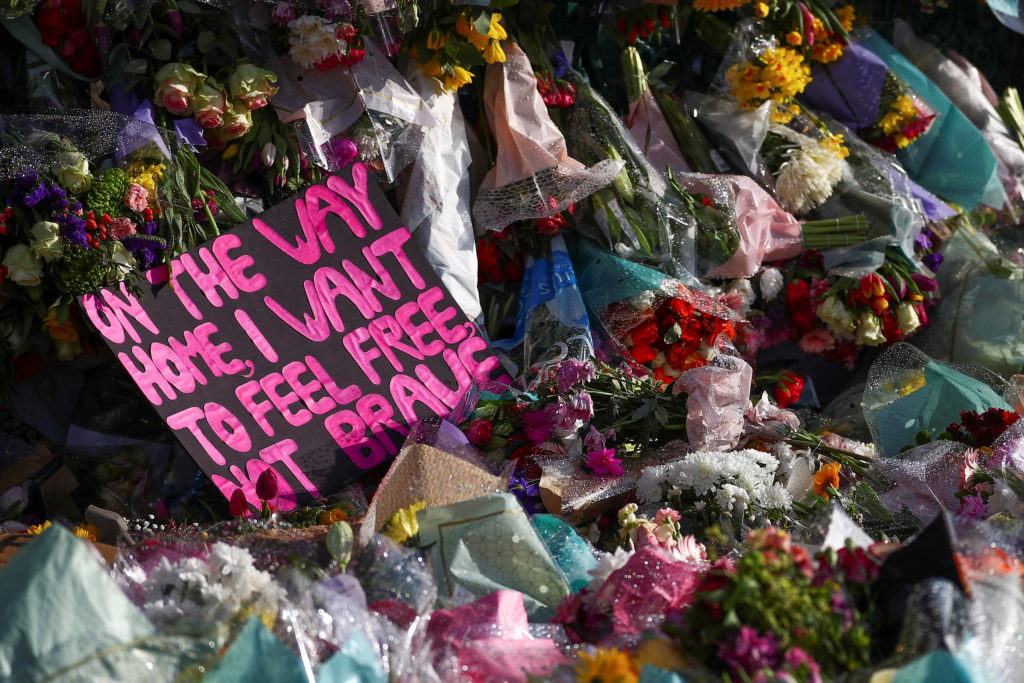 Flowers and a sign are seen at a memorial site at Clapham Common Bandstand, following the kidnap and murder of Sarah Everard, in London, Britain March 15, 2021. Photo by Hannah McKay/REUTERS

Everard’s killing has galvanized women across Britain to speak out about the barrage of verbal harassment and physical threats they face every day, saying they shouldn’t have to live in fear.

Prime Minister Boris Johnson on Monday called a meeting of his Crime and Justice Taskforce, including government ministers, senior police officers and prosecutors, to discuss the issue of women’s safety. Among the items on the agenda is a recent decline in successful prosecutions for rape and sexual assault.

But the opposition Labour Party called on the government to stop talking, toughen penalties for rapists and take action against street harassment and stalking. The party has directed its lawmakers to vote against the crime bill, noting that women aren’t mentioned once in its 296 pages.

“This is a missed opportunity to tackle violence against women and girls that has become endemic in the U.K.,” David Lammy, Labour’s spokesman on justice, said in a statement.

Hundreds of women gathered Saturday night on Clapham Common, a park near the place Everard was last seen alive.

Police broke up the event and arrested four women, saying the gathering endangered public health. London’s Metropolitan Police Service had refused to give permission for the vigil in advance because authorities said it violated restrictions on large gatherings imposed to control the spread of COVID-19.

The front pages of Britain’s Sunday newspapers were filled with pictures of women clashing with police on the common. Many featured photos of Patsy Stevenson, 28, being wrestled to the ground and handcuffed by officers.

“The fact that the police turned up was just disgraceful, because before then it was a peaceful protest,” Stevenson told the Times of London.

Dania Al-Obeid, who was detained at the bandstand on Clapham Common, said she was frustrated by the police response.

“We felt we were silenced,” she said. “And this could have been avoided if there was some understanding and compassion to the trauma that women feel every single day.”

Hundreds gathered again on Monday in London’s Parliament Square to pay tribute to Everard. Holding signs such as “Protect your daughter: Educate your son,” they held a vigil as dozens of police officers looked on.

Left: Women hold signs during a protest at the Parliament Square, following the kidnap and murder of Sarah Everard, in London, Britain March 15, 2021. Photo by Henry Nicholls/REUTERS