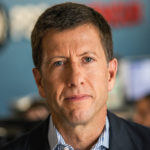 The tiny country of Iceland has made it through to the quarterfinals of the Euro 2016 soccer tournament by beating a giant. The underdog team forced Portugal and Hungary to draws, defeated Austria, and to shocked soccer fans around the world, beat England 2-1 on Monday.

The loss caused England’s soccer manager – the highest paid at the Euro 2016 tournament – to quit, giving up a reported $4.6 million a year contract, while one of Iceland’s managers also works as a dentist.

The island country, with a population of 330,000 – about the size of Corpus Christi, Texas – has gone soccer-crazy. A reported 30,000 fans, a 10th of the population, descended on France to cheer on their team.

The man who may best represent the incredulity of the team’s success is announcer Gudmundur Benediktsson, whose reaction to Iceland’s victory over Austria last week went viral.

His commentary on his country’s stunning victory over England was just as colorful, even poking fun at the recent Brexit vote.

“Iceland is going to play France on Sunday. France Iceland!” he said, according to one translation, “You can go home. You can go out of Europe. You can go wherever the hell you want. … England 1 Iceland 2 is the closing score here in Nice. And the fairy tale continues.”

His reaction to England’s defeat (with subtitles):

Iceland is scheduled to play France on July 3.

Left: Iceland's Ragnar Sigurdsson celebrates scoring the team's first goal in the 2-1 defeat of England in the Euro 2016 soccer tournament on June 27. Photo by Eric Gaillard Livepic via Reuters

Richard is a senior producer for PBS NewsHour and a senior member of the editorial team, helping to manage, plan and produce daily news and feature content for the broadcast, as well as for digital and social media platforms.