PARIS (AP) — Tens of thousands of people marched Sunday in cities around Europe for May Day protests to honor workers and shame governments into doing more for their citizens. In France, protesters shouted slogans against newly elected President Emmanuel Macron, a development that may set the tone for his second term.

Tensions erupted in Paris, as some demonstrators broke windows at some banks and a fast-food restaurant and ripped up street signs. apparently the work of men dressed and masked in black. Police moved in, firing rounds of tear gas.

May Day is often a time of high emotion for trade unionists and other workers, and protests in the last two years have been limited by pandemic restrictions.

Turkish police moved in quickly in Istanbul and encircled protesters near the barred-off Taksim Square — where 34 people were killed In 1977 during a May Day event when shots were fired into the crowd from a building.

On Sunday, Turkish police detained 164 people for demonstrating without permits and resisting police at the square, the Istanbul governor’s office said. On the Asian side of sprawling Istanbul, a May Day gathering drew thousands, who sang, chanted and waved banners, a demonstration organized by the Confederation of Progressive Trade Unions of Turkey. 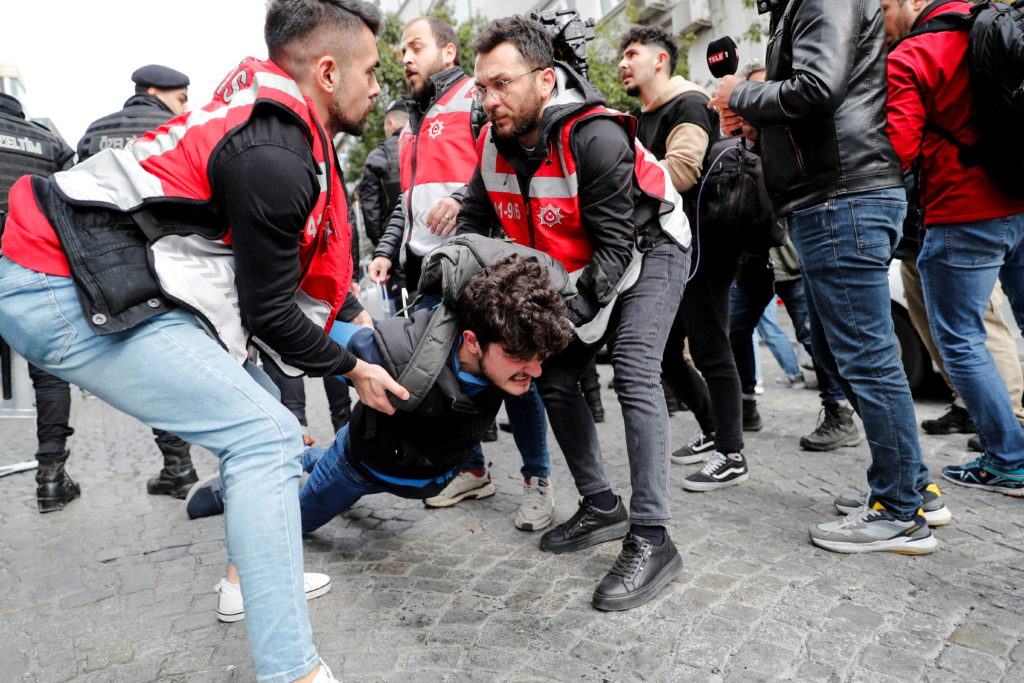 Police officers detain a protester who attempted to defy a ban and march on Taksim Square to celebrate May Day in Istanbul, Turkey May 1, 2022. Photo by Kemal Aslan/Reuters.

In Italy, after a two-year pandemic lull, an outdoor mega-concert was set for Rome with rallies and protests in cities across the country. Besides work, peace was an underlying theme, with many calls for an end to Russia’s war in Ukraine.

Italy’s three main labor unions were focusing their main rally in the hilltop town of Assisi, a frequent destination for peace protests.

“It’s a May Day of social and civil commitment for peace and labor,” said the head of Italy’s CISL union, Daniela Fumarola.

Rising inflation and fears of upcoming food shortages from the war in Ukraine were feeding discontent around the world.

Thousands of workers, unemployed and retirees marched peacefully in North Macedonia’s capital of Skopje, demanding wage increases and respect for workers’ rights. Inflation, running at an annual clip of 8.8% in March, is at a 14-year-high.

Darko Dimovski, head of the country’s Federation of Trade Unions, told the crowd that workers are demanding an across-the-board wage increase.

“The economic crisis has eaten up workers salaries,” he said.

In France, the May Day rallies — which came a week after the country’s presidential election — aimed to show the centrist Macron the opposition he could face in his second five-year term. Opposition parties, notably from the far-left and the far-right, are looking to break his government’s majority in France’s parliamentary election in June.

The Paris march was dominated by far-left leader Jean-Luc Melenchon, who placed third in presidential vote and is now deep in talks with other leftist parties in France, including the once-dominant Socialists who now are struggling to exist. Melenchon appealed to potential partners to ally to keep Macron’s centrists from dominating parliament as they do now.

“Our goal is victory,” he said.

Some 250 marches and protests were being held around France, with the Communist-backed CGT union leading the main march through eastern Paris. All were pressing Macron for policies that put people first and condemning his plan to raise France’s retirement age from 62 to 65. Macron says that is the only way the government can continue to provide good retirement benefits to the French.

“May Day is the time to rally for a reduction in working time. That reduction signifies one key thing — that workers should be getting a larger share of the wealth,” Melenchon said.

In a first, far-right leader Marine Le Pen was absent from her party’s traditional wreath-laying at the foot of a statue of Joan of Arc, replaced by the interim president of her National Rally party. Le Pen was defeated by Macron in last Sunday’s presidential runoff, and plans to campaign to keep her seat as a lawmaker.

“I’ve come to tell the French that the voting isn’t over. There is a third round, the legislative elections,” said National Rally’s Jordan Bardella. “It would be unbelievable to leave full power to Emmanuel Macron.”

Nicole Winfield in Rome, Zeynep Bilginsoy in Istanbul, Demetris Nellas in Athens, Oleg Cetinic in Paris contributed to this report.