The mission of a new panel created to advise the State Department on the definition of human rights and its role in American diplomacy may stand in conflict with what some of its members have said in the past.

Secretary of State Mike Pompeo announced the formation of the Commission on Unalienable Rights on Monday, saying he hoped it would undertake the most extensive reexamination of what counts as an “unalienable right,” first laid out in a 1948 United Nations document known as “The Universal Declaration of Human Rights.”

Pompeo said that in recent decades, despots have abused the term “human rights,” using it in such a broad way that the term itself has lost its heft.

But, according to critics, the new chairperson of the 10-person commission has written in favor of practices that could undermine Pompeo’s stated goal of “ground[ing] our discussion of human rights in America’s founding principles.” Separately, two of the new commissioners are on record defending known human-rights abusers.

While Pompeo has insisted that the goal is to prevent authoritarian regimes from redefining human rights on their own terms, Mary Ann Glendon — the incoming chair, a Harvard Law professor and a former U.S. ambassador — recently advocated an approach of “flexible universalism,” in which she advises human rights activists to give more weight to local governments’ own traditions when appealing to them on the grounds of human rights.

Democratic Rep. Tom Malinowski, who is a former top State Department human rights official, warned that such a policy would potentially grant undue deference to nations who have been proven to defend certain rights abuses.

To Malinowski, who ran the State Department’s Democracy, Human Rights and Labor bureau from 2014 to 2017, the article sounds like Glendon argues in favor of giving regimes more, not less, license in defining human rights.

“Today, human rights activists declare: ‘Here is how you need to change to join us.’ Instead, they should begin by asking: ‘What does human flourishing look like in your society or community, and how can we support you in encouraging it?’” they wrote.

The Democratic congressman from New Jersey called that argument “incoherent,” noting that elsewhere in the article, the authors advocate a narrowing of the types of liberties that can be called human rights.

He said that Glendon “also goes on at length about how we should be more deferential to other cultures and their definitions of human rights. That diplomats should ask other governments nicely, ‘How do you define the well-being of your people and how can we help you achieve it?’”

Glendon, who did not respond to an emailed request for comment, has been described as Pompeo’s mentor while he was attending Harvard Law School.

One possible example of this conflict of ideas is China. In making the case for the commission, and the need for a wholesale revisiting of the concept of “human rights,” the State Department actually cited a white paper released by the Chinese Communist Party last year, in which it asserted that it had “blazed a trail of development in human rights that conforms to the national conditions.” 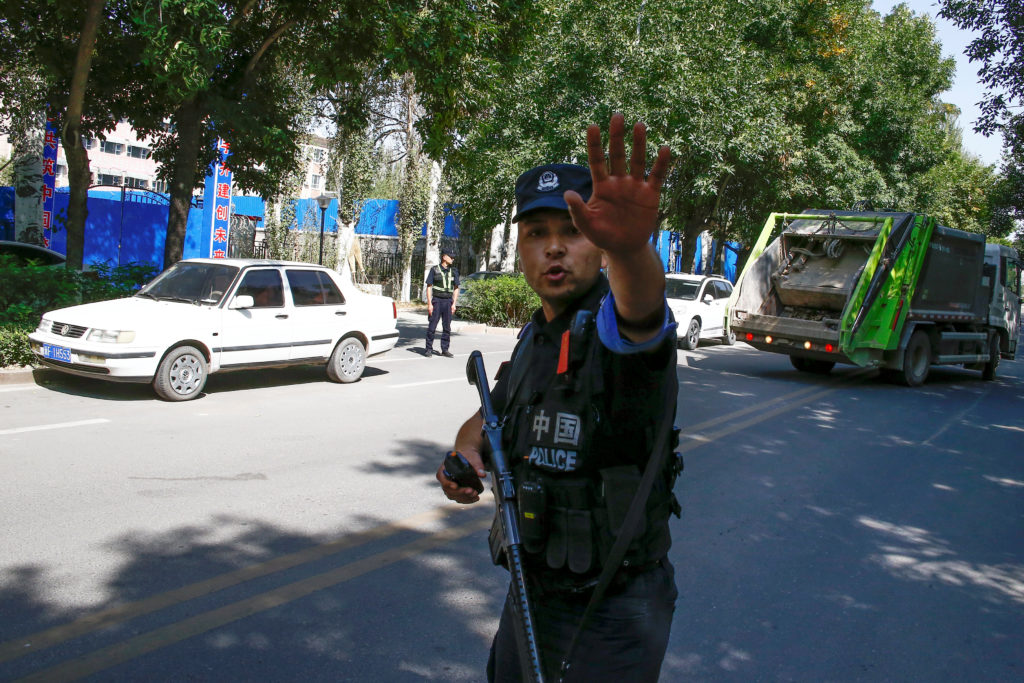 A Chinese police officer armed with an automatic weapon gestures toward reporters at a roadblock near what is officially called a “vocational education centre” in Yining in Xinjiang Uighur Autonomous Region, China in 2018. Photo by REUTERS/Thomas Peter

But the United States continues to condemn China as a major abuser, noting, recently, its mass detention of Uighur Muslims in detention camps within the country.

Malinowski said governments like China could take advantage of possible U.S. flexibility to actually further their repressive practices in the name of “economic and social rights,” which is a term China often uses to justify its practices. For example, the State Department says China practices widespread Internet censorship to prevent disruptions to the “economic or social order,” according to the most recent human rights report.

What commissioners have said about authoritarian regimes

The 10 commissioners have written extensively about the philosophical meaning of “human rights” as a concept. Occasionally, they’ve also waded into foreign affairs. Two have previously defended the regimes in Saudi Arabia, the United Arab Emirates and Turkey, all of which stand accused of human rights abuses by international standards. The State Department’s most recent annual human rights survey cited extensive abuses by all three countries.

In 2018, commissioner Russell Berman, a Stanford University professor of comparative literature and German studies, downplayed the outcry over the murder of Saudi journalist Jamal Khashoggi, saying the reaction was politically motivated.

“The hue and cry about [Khashoggi] has really been—no surprise there—about the upcoming election, another effort to get at President Trump,” Berman said in an October 2018 interview with the Hoover Institution, a think tank at Stanford. That was a few weeks after Khashoggi’s murder and a month before reports surfaced that the CIA assessed Saudi Crown Prince Mohammed bin Salman had ordered Khashoggi’s killing.

Berman went on to praise the Saudi kingdom more broadly, saying that compared with Tehran, Saudi Arabia had a moderate reform agenda.

While the U.S. must maintain a relationship with the Saudis, the Khashoggi murder reopened the discussion about the alliance, said Michael Posner, who served at State from 2009 to 2013.

Posner expressed doubt that any one commissioner’s personal views would affect the department’s overall policies, but said that their ruminations on long-standing positions held at each of the agency’s many bureaus could muddle the State Department’s overall message.

“It can be confusing and it can undermine a normal, functioning process,” Posner said, adding that the input of the commission could serve as a “distraction, and it undermines the normal process.”

Asked about Berman’s Khashoggi comments, a senior administration official referred to President Donald Trump’s latest comments about the matter at the G20 summit in Osaka, Japan.

During a press conference there, Trump said he was “very unhappy” about Khashoggi’s murder but said “nobody, so far, has pointed directly a finger at the future King of Saudi Arabia,” contradicting the assessment of his own intelligence agency. Trump also met with Crown Prince Mohammed during this visit but did not answer a question as to whether or not he brought up Khashoggi with him.

An email to Berman and his colleagues about whether his October comment still reflected his opinion on the Khashoggi matter went unanswered at the time of publication.

Besides the Khashoggi killing, State cited Saudi Arabia in its annual report for “unlawful killings; executions for nonviolent offenses; forced renditions; forced disappearances; and torture of prisoners and detainees by government agents,” among other abuses.

The State Department and many non-governmental rights organizations have also condemned both Saudi Arabia and the United Arab Emirates for their involvement in the Yemen civil war, where Saudi-led airstrikes have led to disproportionate civilian deaths.

Contrary to Yusuf’s assertion, the UAE also stands accused of numerous human rights abuses perpetrated on its own citizens. 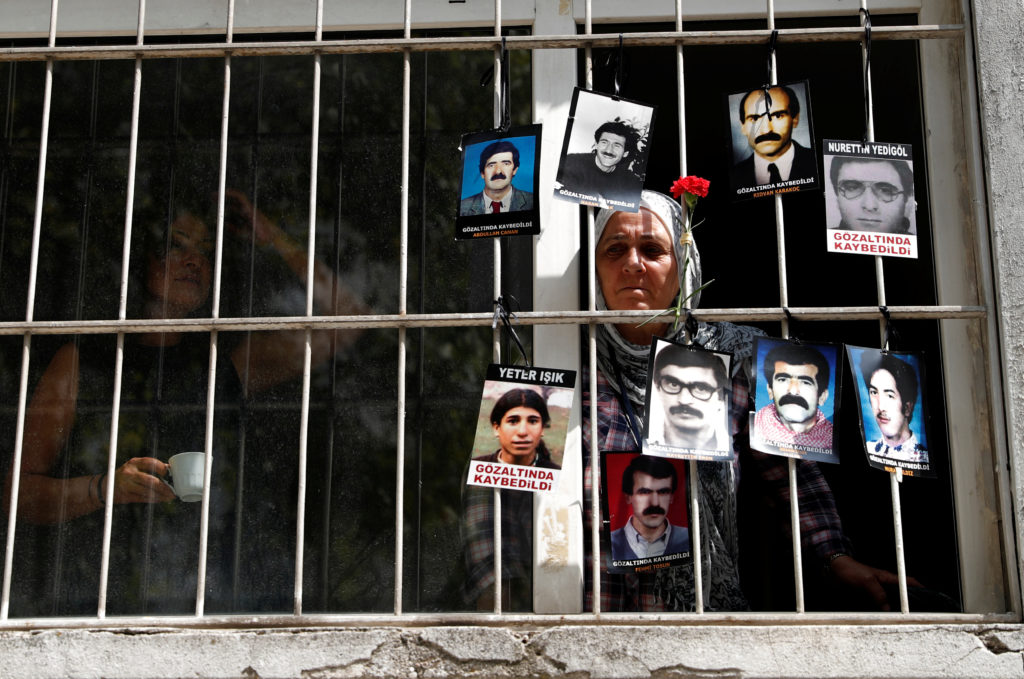 In 2018, a member of the “Saturday Mothers” looks out of the window of Human Rights Association in Istanbul after they were prevented by the security forces to march and hold a vigil while holding pictures of relatives who went missing in police detention. Photo by REUTERS/Murad Sezer

“For someone as influential as Sheikh Hamza Yusuf to call the UAE ‘tolerant’ contributes and gives credibility to the authorities’ carefully tailored, yet false image as a progressive and rights respected state,” Zayadin said.

“Even [Erdogan’s] desire to increase the executive powers of the president’s office is simply to move toward an American model as opposed to the current European one,” Yusuf wrote on his website.

Since the 2016 coup attempt, the most recent report on Turkey noted, the Erdogan regime had imprisoned more than 80,000 citizens and closed more than 1,500 NGOs on terrorism-related claims.

What impact will the commission have?

When asked about Glendon and Yusuf’s previous writings, the senior administration official responded, “I would judge the commission on the work it produces rather than pre-judging it based on selective quoting.”

The official also defended the commission against accusations that its goal is to overhaul specific State Department policies.

“This is not an effort to discover new principles or make up new policy…. It’s about grounding our understanding of human rights in our founding principles and in the principles of the 1948 declaration,” the official said.

The official noted that the commission is part of the Policy Planning Staff, a clearinghouse for independent analysis and advice for the secretary of state, arguing that its position means it will not play a role in policy-making.

State Department advisory commissions are not a new phenomenon, and serve to provide “open dialogue between the U.S. Government and the private sector on various issues,” according to an agency website, which lists previous panels, including on historical diplomatic documentation, defense trade and overseas security.

These commissions do not need congressional approval or appropriations of funds. Instead, they are enacted with a “timely notice” in the Federal Register, per a 1972 law, which also says advisory committees may not make policy, leaving such decisions up to the president or “an officer of the federal government.”

Some lawmakers, including Rep. Jim Banks, R-Ind., praised the commission after its announcement.

“While many countries throughout the years, and through the United Nations, have expressed their shared belief in these human rights, the many crises that currently threaten human dignity and liberty have cast a shadow of doubt as to whether or not this is actually the case,” Banks said in a statement.

Some human rights groups and Democratic lawmakers have also expressed concern that the commission’s goal of refocusing on “unalienable rights” is actually an attempt to narrow the rights the government has to protect, including abortion rights and protections for the LGBTQ community.

Malinowski said that while the statements about particular governments and leaders by the commissioners could be counterproductive, the whole conversation about how to define unalienable human rights was irrelevant to the work the State Department does each day, and how diplomats there frame their overall mission.

“What matters is not this abstract academic stuff. What matters is how do you stand up for human rights in the world when your president is in love with Kim Jong Un, and justifies the brutalities of the Saudi dictatorship?” Malinowski said in an interview with the PBS NewsHour. “I’m much more concerned about President Trump calling the press the enemy of the people than I am about some second-rate academics theorizing at the State Department,” he said.

Left: U.S. Secretary of State Mike Pompeo delivers remarks during an event to release of 2019 Trafficking in Persons report at the State Department in Washington, U.S., June 20, 2019. Photo by: Yuri Gripas/Reuters