Spain offers to take in migrant ship amid Italy-Malta standoff

ROME — Spain stepped up Monday and offered to take in a rescue ship carrying more than 600 migrants after Italy and Malta refused. The diplomatic standoff had left the migrants stranded at sea and revealed the brass-knuckled negotiating tactics of Italy’s new anti-immigrant government.

Italy and Malta immediately thanked Spain’s new Socialist prime minister for the offer to receive the SOS Mediterranee rescue ship Aquarius at the port of Valencia. But it wasn’t immediately clear if such a voyage was feasible given the distances involved — the ship is now more than 1,400 kilometers (over 750 nautical miles) from Valencia.

The Aquarius said it had received no instructions yet to head to Spain.

The U.N. refugee agency, the European Union, Germany and humanitarian groups had all demanded that the Mediterranean countries put their domestic politics aside and urgently consider the plight of the rescued migrants, which included children, pregnant women and people suffering from hypothermia.

“The duty of a democratic government is not to look away” in a humanitarian crisis, said Barcelona Mayor Ada Colau, who also offered her port as a potential solution to the standoff.

Doctors Without Borders, which has staff aboard the Aquarius, said the rescued migrants were stable for now but that food and water on the ship would run out by Monday night. It said some of the passengers were suffering from water in their lungs as well as chemical burns caused when gasoline mixes with seawater. Seven are pregnant. 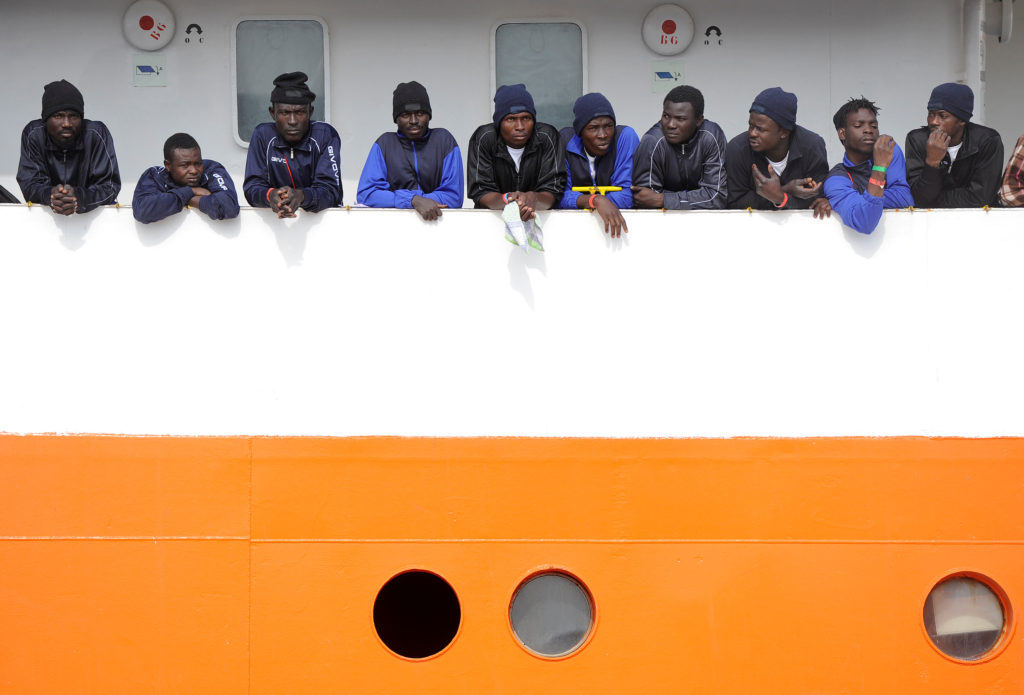 Migrants wait to disembark from Aquarius in the Sicilian harbor of Catania, Italy. Photo by Guglielmo Mangiapane/Reuters

But Italy and Malta held firm despite the heavy diplomatic pressure, with Italy’s new interior minister, Matteo Salvini, clearly using the high seas drama as a pretext to force the hand of Italy’s European neighbors. Italy has long demanded that the EU change its migration policy and make good on promises to accept more refugees, saying that Italy has been left alone to coordinate rescues and accept tens of thousands of migrants a year for asylum processing.

The migrants had been rescued from flimsy smugglers’ boats in the Mediterranean during a series of operations Saturday by Italian maritime ships, cargo vessels and the Aquarius itself. All passengers were offloaded to the Aquarius to be taken to land.

Italy claimed that Malta should accept the Aquarius because Malta was the safest, closest port to the ship. Malta said Italy coordinated the rescues and that it has had nothing to do with it.

Spain’s new Socialist prime minister, Pedro Sanchez, ordered authorities in Valencia to open the port, saying “it’s our duty to avoid a humanitarian catastrophe and offer a secure port for these people.”

But it wasn’t clear if the offer would be taken up given that the trip would expose the migrants to several days more on the sea.

Still, both Muscat and new Italian Premier Giuseppe Conte readily thanked Spain for the offer, with Conte saying “it goes in the direction of solidarity.”

As the rhetoric intensified, the Aquarius remained on standby in the Mediterranean Sea with its 629 passengers, including 123 unaccompanied minors. The ship said it had been ordered by Italy’s coast guard late Sunday to remain 35 miles off Italy and 27 miles from Malta, and there it remained Monday.

Despite the firm “no” from Italy’s national government, several Italian mayors offered to let the ship dock in their ports, including the left-leaning or centrist mayors of Naples, Reggio Calabria and Crotone.

A doctor on the ship, Dr. David Beversluis, said there were no medical emergencies onboard but one passenger had to be revived after he was rescued.

“When the boat broke, a man sank in front of the eyes of the rescuers, who managed to catch him and revive him once out of the water. He is now out of danger,” Beversluis said. “All the survivors are exhausted and dehydrated because they spent many hours adrift in these boats.”

Almost a quarter of the migrant survivors hail from Sudan, the group said.

Doctors Without Borders tweeted a video of some of the women aboard the ship praying Monday morning, saying they were unaware of the diplomatic fight being waged over their fate.

“Thank you Lord,” the women sang.

The standoff marked the first inevitable clash over migrant policy with League leader Salvini, who is now running Italy’s Interior Ministry. Salvini campaigned on an anti-immigrant platform that included a vow to expel hundreds of thousands of migrants already in Italy, even though experts doubt such mass deportations are feasible or financially viable.

Malta, for its part, has consistently refused to take in migrants, citing its small size and limited capacities. The island nation has reduced the number of migrants it has taken in over the past decade, from a high of 2,775 in 2008 to just 23 last year, according to U.N. statistics.

Salvini pointed to Malta’s unwillingness to help in accusing Europe as a whole of leaving Italy on its own to deal with the refugee crisis. He noted that other European countries are very much involved in migrant rescue operations in the Mediterranean — including a German aid group currently off the coast Libya — but no country is stepping up to actually take in the migrants once they are plucked from boats or the sea.

“Italy has stopped bowing our heads and obeying,” Salvini said in a Facebook post. “This time we say no.”

The standoff is actually the third migrant dispute in recent weeks, after Italy’s outgoing government refused to let humanitarian aid groups dock in Italian ports until the ships’ flag nations had formally requested permission. Those incidents delayed the migrants’ arrival, but they ultimately made it to Italy.

Left: The MV Aquarius rescue ship is seen as migrants on are rescued by the SOS Mediterranee organisation during a search and rescue (SAR) operation in the Mediterranean Sea, off the Libyan Coast. Photo by Tony Gentile/Reuters