When Dilip Ratha arrived in the United States in 1990, he had $20 in his pocket and a plan to send money back home. Only with strict discipline could Ratha stretch his $600-a-month in wages far enough to mail a check to his family in Sindhekela, a village in India’s northeastern state of Orissa.

Each month, half of the $600 paid rent for a shared apartment in Philadelphia. $100 paid for phone calls home at a cost of $1 per minute (As the first person in his family to leave his village, he cherished those phone calls, despite the cost). Another $50 to $70 went to his father and brother. With the little money left over, he bought food.

“It was literally a hand-to-mouth kind of thing. I was paid every 15 days, and I had planned it out for a few months, counting every dollar to manage the deposit,” said Ratha, who is now an economist at the World Bank.

Ratha was also one of the first people to track worldwide remittances, the money migrants regularly send back to the developing world. His story is becoming increasingly common as more people crisscross the globe for work and send home the money they earn.

An estimated 247 million people worldwide lived in countries where they were not born in 2013, the latest time period with available data, according to newly released data from the World Bank.

Within that group, migrants sent $436 billion in remittances to the developing world in 2014, up from $418 billion over the previous year, the data show.

For comparison, that is more than three times the combined amount of official development aid that the world’s wealthiest nations sent the developing world in 2014, which was about $135 billion, virtually unchanged from the year before, according to the Organization for Economic Cooperation and Development.

Here’s why that is a big deal. Remittances are widely seen as one of the most stable forms of aid, even more than what one nation may send to another, an amount that can change given the donor country’s political or economic climate.

These deposits represent promises to help family and friends left back home while the migrant works in a foreign land. Failing to send money home could mean one’s loved ones can no longer afford to send a child to school or pay the rent or eat.

Unlike major non-profit organizations or government agencies that specialize in foreign aid, when a migrant sends a remittance, that money goes directly to his or her loved one, acting as precision-targeted development assistance. 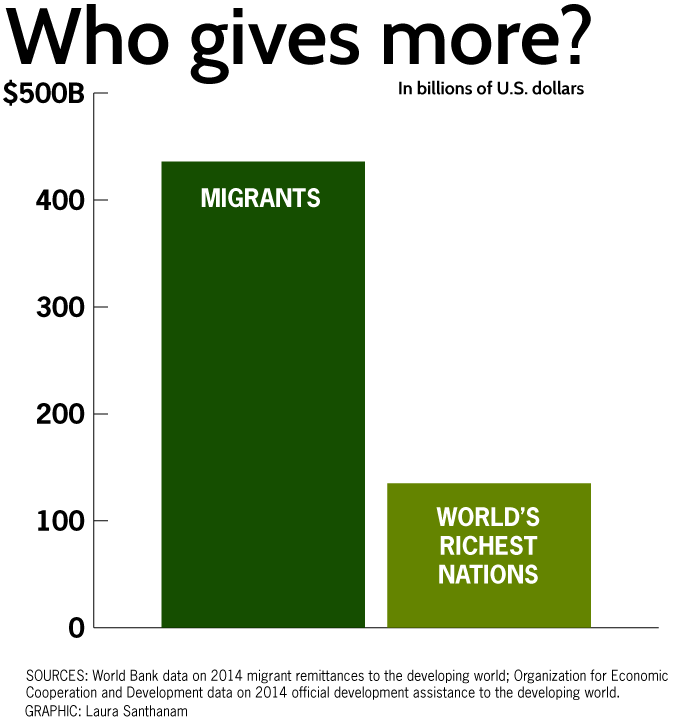 In fact, people who study remittances want to develop policy based on that reliable flow of money from migrants. Migrant spending often prioritizes long-term benefit for a family, such as saving money to build or buy a house, start a business, or send a child to school. The subject is of particular interest to Dean Yang, an associate professor of public policy and economics at the University of Michigan who surveyed migrants and their families about remittances.

Yang thinks that if migrants were to gain more control over how the money gets spent, the results could translate into wiser use of money among the families receiving it and strengthen communities one household at a time.

He saw this play out in an experiment that surveyed 1,986 migrant workers in the United States who sent money to to 1,338 households in El Salvador.

Migrant workers could open, monitor and control the amount of money in the account they shared with their family. While they couldn’t prevent the family from emptying the account, they could say, “I know you did that,” Yang said.

After 18 months, households saw dramatic savings, he said. In the experiment, if migrants held both a savings account and a joint bank account with the person receiving remittances in El Salvador, the ability to save increased by an average of $282.

There are more migrants in the United States than anywhere else, and they sent more money abroad than from any other country, adding up to an estimated $131 billion in remittances last year, according to the World Bank’s latest data. Nations that benefited the most from these dollars are Mexico, China and India.

Usually, remittances from the United States are sent via money-wiring services that are not banks, such as Western Union or MoneyGram, which charge a fee to do business.

But a bill before Congress seeks to increase that added cost of sending remittances.

In January, Senator David Vitter (R-LA) proposed the Remittance Status Verification Act of 2015, a law that would fine a person attempting to send a remittance if that person were unable to verify their legal status in this country. The fine would equal 7 percent of the amount sent.

Under the proposed law, if a person tried to send the average remittance of $200, but was unable to show sufficient legal identification, they could be fined $14. Add that to remittance fees for that same amount of money, which normally fall between $5 to $10.

Vitter has said that such a fine would help enforce immigration laws. “My legislation would help us figure out how many foreign workers are here illegally and make them pay for wiring money back home,” he said.

Others say that if passed, this law could place a burden not only on the person sending the remittance but also money wiring companies.

“It would be horrible,” said David Landsman, executive director for the National Money Transmitters Association. “7 percent is enough money to make most corporations tread over their own grandmothers,” Landsman said. “7 percent is a significant difference. It’s not a trivial amount.”

This would likely result in an increase in illegal money transfers, such as hand-delivered cash, shipping parcels filled with hidden money or the use of unlicensed operators, he said.

“I believe that in about three years, people will start talking about federalizing regulation for our business. It’s way too complex at this moment,” Landsman said. “You have mobile, plastic, Internet. There are so many ways to do money transfer that are just burgeoning.”

He defended the fees that money transfer services already charge.

“It’s not only that people think we charge too much, but people have a disproportionate idea about what expenses are,” Landsman said.

Ratha with the World Bank says these fees are simply too much for migrants living on a tight budget.

Today, he takes his case through the World Bank to the United Nations in New York City as part of a drafting meeting for the 48th Session of the Commission on Population and Development, where the development community is gathering to determine what the world’s goals for 2030 should be. The United Nation’s Millennium Development Goals made 15 years ago prioritized clean drinking water for all, gender equality and measures to reduce poverty by half. Further discussion will take place in Addis Ababa in July during the Third International Conference on Financing for Development.

Now, the commission is exploring how to address population issues and sustainable development. Among questions the commission will consider addressing: should the world work to reduce remittance fees so that migrants can send even more money home? Ratha thinks so.

“If you reduce remittance costs, you could generate $20 billion per year in additional funding, putting that money in the hands of poor people who might send it home,” he said.

Left: Migrant workers harvest cucumbers on a farm in Virginia. A new report from the World Bank today estimates that there are more than 247 million migrants worldwide who sent $436 billion to the developing world in 2014. Photo by Elizabeth Pohl/Bread for the World/Flickr