MINA, Saudi Arabia (AP) — Millions of Muslims across the globe — including in countries like Afghanistan, Libya, Egypt, Kenya and Yemen — were celebrating Eid al-Adha on Saturday, one of the biggest holidays of the Islamic calendar.

Known as the “Feast of Sacrifice,” the revered observance coincides with the final rites of the annual hajj in Saudi Arabia. It’s a joyous occasion, for which food is a hallmark. Much of Asia, including Indonesia, India and Pakistan, will observe the holiday on Sunday.

But as Russia’s war in Ukraine sends food prices soaring and causes widespread hardship across the Middle East, many say they can’t afford the livestock for the ritual sacrifice. Desperation over the cost of living has undercut the typically booming holiday trade in goats, cows and sheep.

“Everyone wants to sacrifice an animal in the name of Allah, but they are not able to do so because they’re poor,” said Mohammad Nadir from a cattle market in Mazar-e-Sharif, northern Afghanistan, where a few men haggled over bleating sheep.

Eid al-Adha commemorates the Quranic tale of Ibrahim’s willingness to sacrifice Ismail as an act of obedience to God. Before he could carry out the sacrifice, God provided a ram as an offering. In the Christian and Jewish telling, Abraham is ordered to kill another son, Isaac.

Many Muslims celebrate the four-day feast by ritually slaughtering livestock and distributing the meat among family, friends and the poor. At al-Shati refugee camp in west Gaza City on Saturday, excited children lined up for the innards and trotters — a cherished offering for those otherwise unable to afford meat.

In cash-strapped Afghanistan, there is usually a shopping rush for prime animals ahead of the holiday. But this year, galloping global inflation and economic devastation after the Taliban takeover have put a purchase of great religious importance beyond the reach of many.

“Last year on this day I sold 40 to 50 cattle,” said Mohammad Qassim, an Afghan cattle vendor. “This year, I have only managed to sell two.” 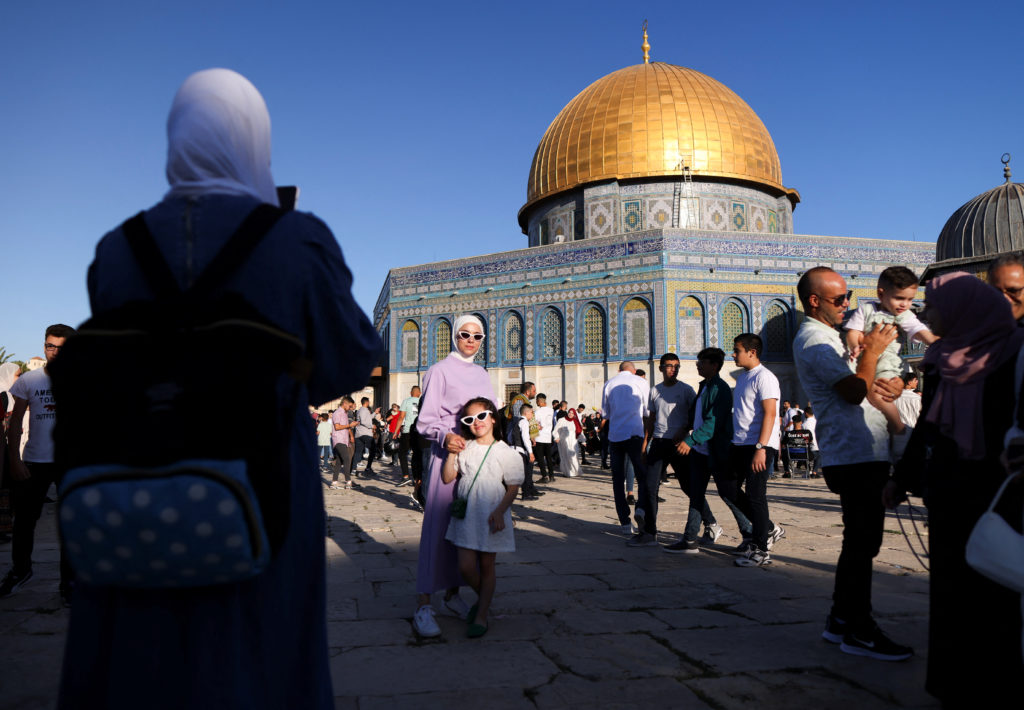 Palestinians celebrate on the first day of Muslim holiday of Eid al-Adha on the compound known to Muslims as Noble Sanctuary and Jews as Temple Mount, in Jerusalem’s Old City, July 9, 2022. Photo by Ammar Awad/Reuters.

Wheat and meat prices have multiplied and hunger has spread as Russia’s war on Ukraine disrupts agriculture and constrains energy supply. The sky-high costs of animal feed and fertilizer have forced livestock salesmen to hike prices.

From Tripoli in war-torn Libya, families are looking forward to the holiday after the past two years of the pandemic and more than a decade of violent chaos. But the price tags — up to $2,100 per sheep — had buyers pacing around the dusty market near the palm-studded highway, apprehensive about the major purchase.

At a livestock market in the blockaded Gaza Strip, there were hardly any buyers. Vendors said the price of sheep feed has jumped four fold in recent weeks.

“Our life is full of loss,” lamented Abu Mustafa, a sheep salesman in Deir al-Balah in central Gaza, which long has suffered from widespread joblessness and poverty.

On the streets of Ramallah, in the West Bank, Palestinian families were cutting back on other components of the feast — typically a bounty of dishes, from offal to kaak and maamoul holiday cookies.

“On days like these, there was demand for fruits, sweets and for nuts as well, but as you can see … no one is standing to buy now,” complained fruit vendor Baligh Hamdi.

But lavish feast or no, there were community prayers — a welcome sight in much of the world after years of coronavirus-related restrictions. The faithful crowded into mosques across the Middle East and North Africa on Saturday.

From Kenya to Russia to Egypt, throngs of worshippers prayed shoulder to shoulder, feet to feet.

“I feel very happy that all these people came to pray,” said Sahar Mohamed in Cairo, smiling widely. “There is love and acceptance between people.”

In Saudi Arabia, hundreds of thousands of pilgrims rose at dawn to trek to Mina, a wide valley ringed by barren mountains where Prophet Muhammad stopped on his route some 1,400 years ago. One million Muslims from around the world flocked this week to the holy city of Mecca, the largest pilgrimage since the pandemic upended the event.

At the multistory Jamarat Complex, pilgrims carried out the symbolic stoning of the devil, recalling Ibrahim’s victory over temptation. It’s among the set of rituals associated with the Prophet Muhammad and the prophets Ibrahim and Ismail, or Abraham and Ishmael in the Bible, performed every year for these five intense days.

The pilgrims threw pebbles at three large pillars that mark the places where the devil tried to interrupt Ibrahim’s sacrifice. 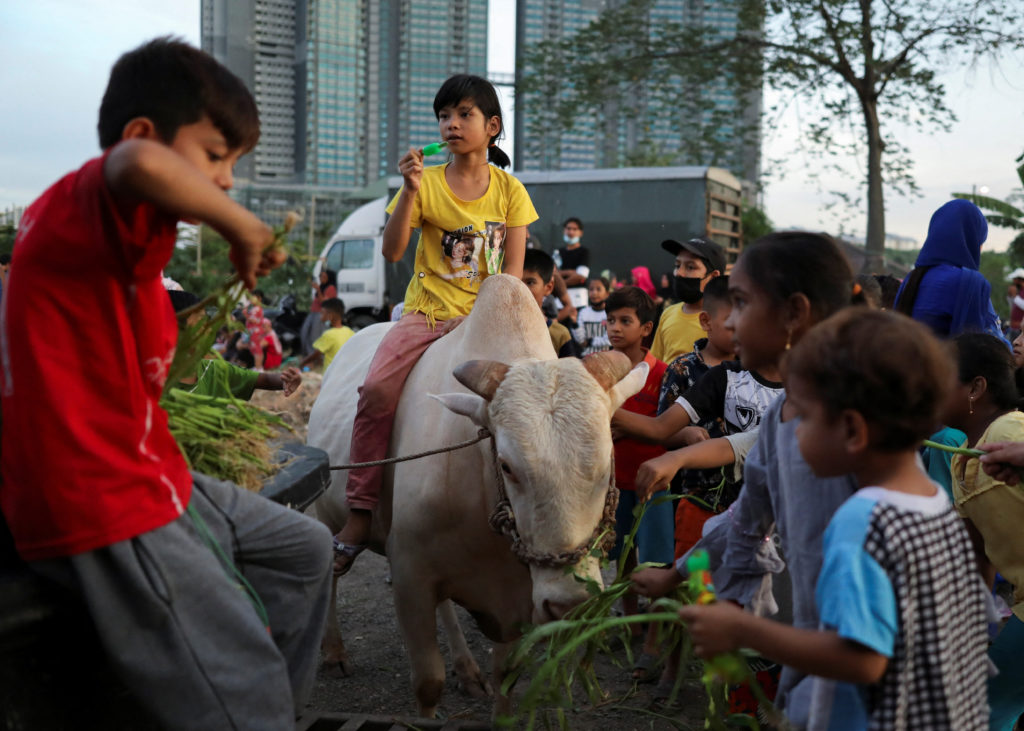 It’s the most dangerous point in the hajj, with masses streaming back and forth. In 2015, thousands of pilgrims were crushed to death by surging crowds. The Saudi government never gave a final death toll. In the years since, authorities have improved access with wider streets, electronic gates and a high-speed rail link.

All Muslims who are physically and financially able to complete the spiritual journey are supposed to do so at least once in a lifetime. Saudi Arabia maintained limits to curb the spread of the virus this year, with a COVID-19 vaccine mandate and attendance less than half of pre-pandemic quotas.

Still, the scenes were a significant step closer to normal. The famous crowds thronged the holy sites, abandoning masks and safety measures.

At the end of the pilgrimage, one of the key pillars of Islam, men are expected to shave their heads, and women to snip a lock of hair in a sign of renewal.

They will return to Mecca to circle the cube-shaped Kaaba, which represents the metaphorical house of God, in farewell before heading home and continuing to celebrate the remainder of Eid al-Adha with family.

“We are feeling very proud,” said Indian pilgrim Izhar Anjoom, who was stoning the devil in Mina. “We are enjoying (ourselves) so much because today is Eid.”