Changing Minds in Senegal to Protect Girls From Genital Cutting

Molly Melching didn’t think she had much more than curiosity — and a love of the French language — when she ventured off soon after college for Senegal.

It turns out that this product of a conservative Midwestern Lutheran upbringing may have brought exactly the qualities and experiences needed to help engineer one of the most sweeping shifts in social norms and behavior in history. Her organization, Tostan, has helped 6,400 (and counting) communities in Senegal and seven other African nations abandon the practice of female genital mutilation, one that about 3 million girls endure each year and one that governments, aid agencies and missionaries have tried to end for centuries.

Melching’s story from Danville to Dakar is chronicled in a book to be released April 30: “However Long the Night: Molly Melching’s Journey to Help Millions of African Women and Girls Triumph.”

Arriving in 1974, Melching quickly shed the mini-skirt wardrobe she’d packed from her years at the University of Illinois, in favor of the long flowing boubous worn locally.

“Senegalese are very accepting,” she says of people in that predominantly Islamic West African nation. “But they would never have opened up to me if I did not show respect.” 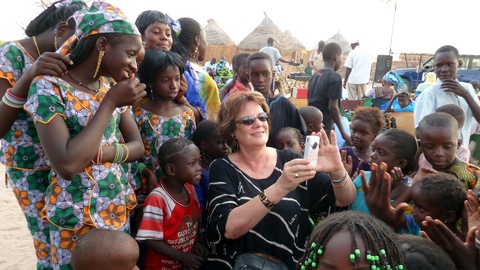 That respect came naturally in an almost-instant embrace of her adoptive country, where she has now lived for nearly four decades. Melching quickly learned Wolof, a language in far wider use in the region than the colonial French of the urban elite and one that opened the door to a far wider circle of friends. Living in a thatched hut in rural villages afforded a peek into the myriad problems women endured with their health and that of their children — most of which they attributed to evil spirits and curses.

When you lack information, superstition fills the vacuum, Melching says. “It was no different than when witches were burned at the stake.”

When she began what would become Tostan, which means “breakthrough” in Wolof, her goal was simply to provide basic health information, things like germ transmission and infection. She had no intention of broaching the sensitive and extremely taboo subject of genital cutting. That cause was championed by her Senegalese colleagues and friends, newly armed with health information and driven in at least one compelling case — a “cutter” named Oureye — by her own guilt. Oureye is one of several strong characters in the book, written by New York-based journalist and author Aimee Molloy and published in a partnership between the Skoll Foundation (an underwriter of the NewsHour) and the HarperOne division of HarperCollins.

Also publicly revealed for the first time in the book is Melching’s own encounter with sexual violence while in college, an experience that fed strong empathy for the women she would get to know in Senegal. That empathy is a hallmark of Tostan’s approach to female genital cutting, a non-judgmental term she prefers to “mutilation” used by the World Health Organization.

The message is “we know you love your daughters and would never want to harm them,” she says.

People cannot be shamed into behavior modification, Melching insists. They need good scientific information to make their own decisions. It’s a simple powerful lesson that applies to just about any development endeavor, one she hopes the book will help spread widely.