Photos: The morning after in Scotland

Scottish citizens awoke today — if they ever went to bed at all — to the news that their country will remain part of the United Kingdom.

A record-breaking 85 percent of registered voters turned out at the polls Thursday to cast their ballots for or against independence, the Associated Press reports. This included a number of voters under the age of 18 — the referendum was the first time individuals as young as 16 were permitted to vote on a major matter of state in the United Kingdom. The majority of residents, 55 percent, voted against independence, while 45 percent voted for it. 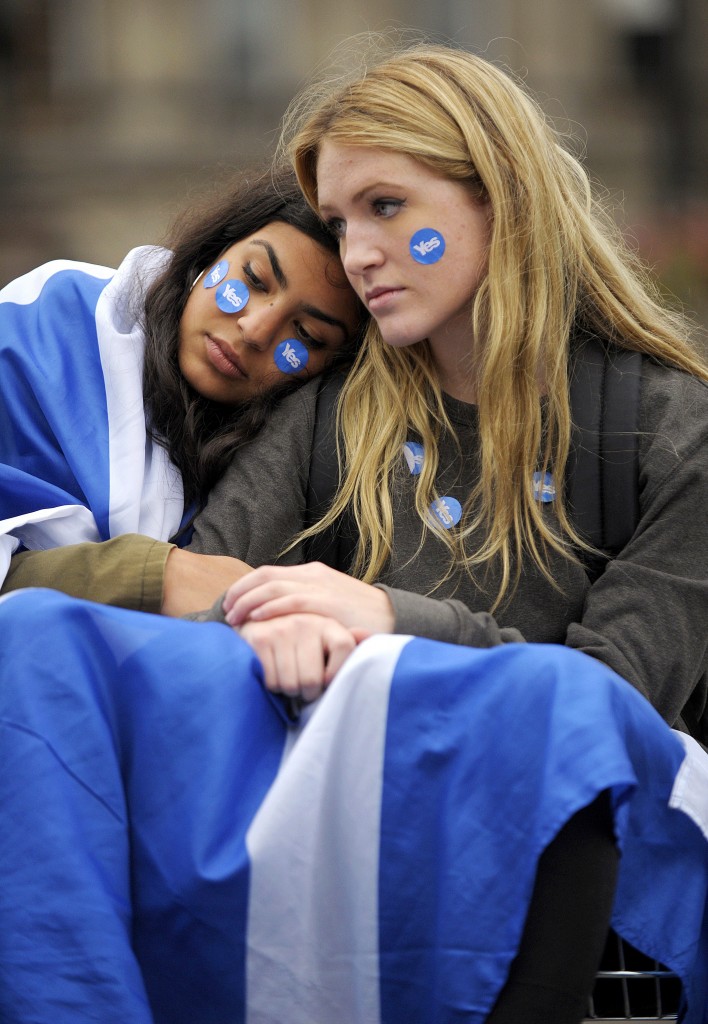 And the agony: Pro-independence supporters console each other in George Square in Glasgow following a defeat in the referendum on Scottish independence. Photo by Andy Buchanan/AFP/Getty Images 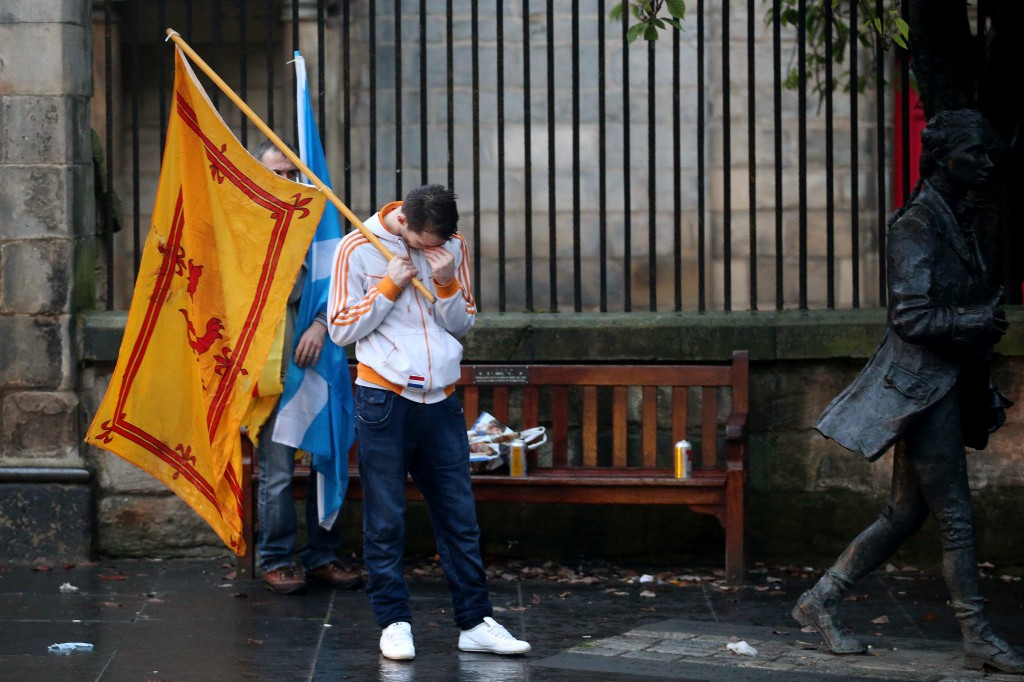 Across the nation, independence-seekers mourned their loss. The leader of the Yes Scotland movement, Alex Salmond, announced today that he will resign his position as Scotland’s first minister and the leader of the Scottish National Party, which has championed independence for decades.

“We lost the referendum vote but can still carry the political initiative. More importantly Scotland can still emerge as the real winner,” Salmond said at the time of his resignation. 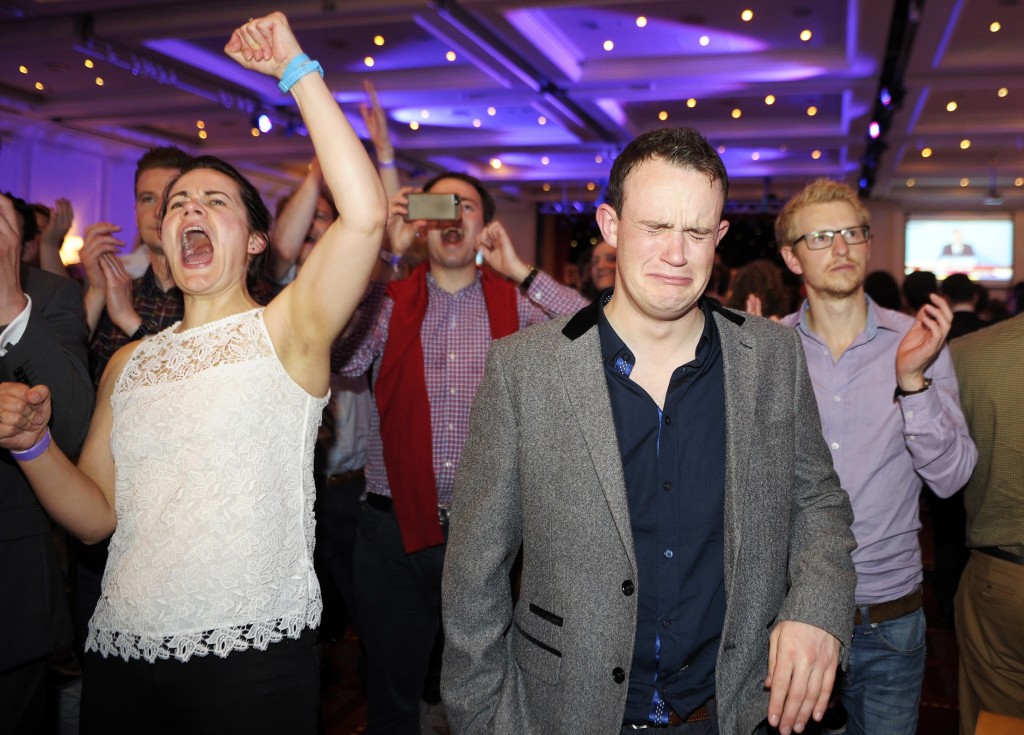 Pro-Union supporters celebrate following the announcement of referendum polling results during a ‘Better Together’ event in Glasgow. Photo by Andy Buchanan/AFP/Getty Images

Meanwhile, those who voted to remain part of the United Kingdom celebrated the results. In a victory speech, Alistair Darling, leader of the Better Together movement said, “The people of Scotland have spoken. We have chosen unity over division, positive change rather than needless separation.” However, he did not discount the need for political change, adding, “Every political party must listen to (the) cry for change, which could be echoed in every part of our United Kingdom but had this opportunity to express itself in Scotland.”

British prime minister David Cameron repeated this sentiment, saying the results were “clearly not a vote against change.”

The political fallout remains to be seen, but individual reactions can be seen across the nation and around the web.

The UK’s Telegraph has been live blogging from the time the polls opened. At 4 p.m. local time they reported on the referendum’s impact in the world of sports:

Fans of Scotland’s national football team have decided there is little point in singing Flower of Scotland, their anthem, at Ibrox. One Scotland fan pointed out: “How can we possibly sing Flower of Scotland when it contains the ridiculous line of ‘But we can still rise now and be the nation again’?” Another admitted: “The anthem is completely redundant now.” 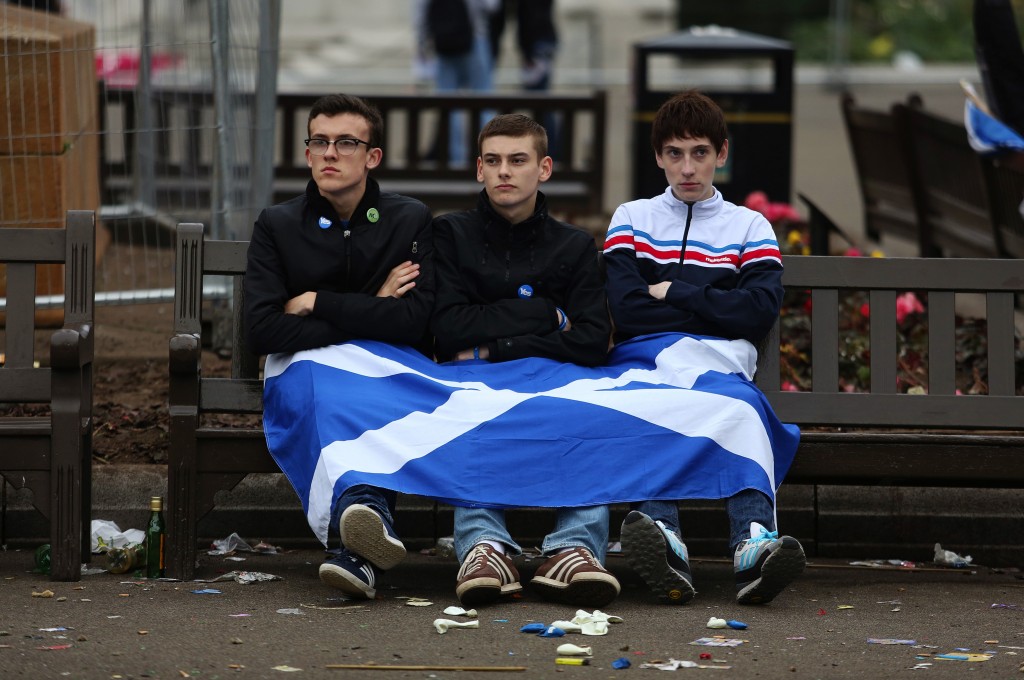 Revelers wrapped in the national flag of Scotland sit on a bench following the announcement of the referendum result in George Square in Glasgow. Photo by Chris Ratcliffe/Bloomberg via Getty Images

The news organization also reported that The Scotch Whisky Association welcomes the “stability” brought by the referendum result. 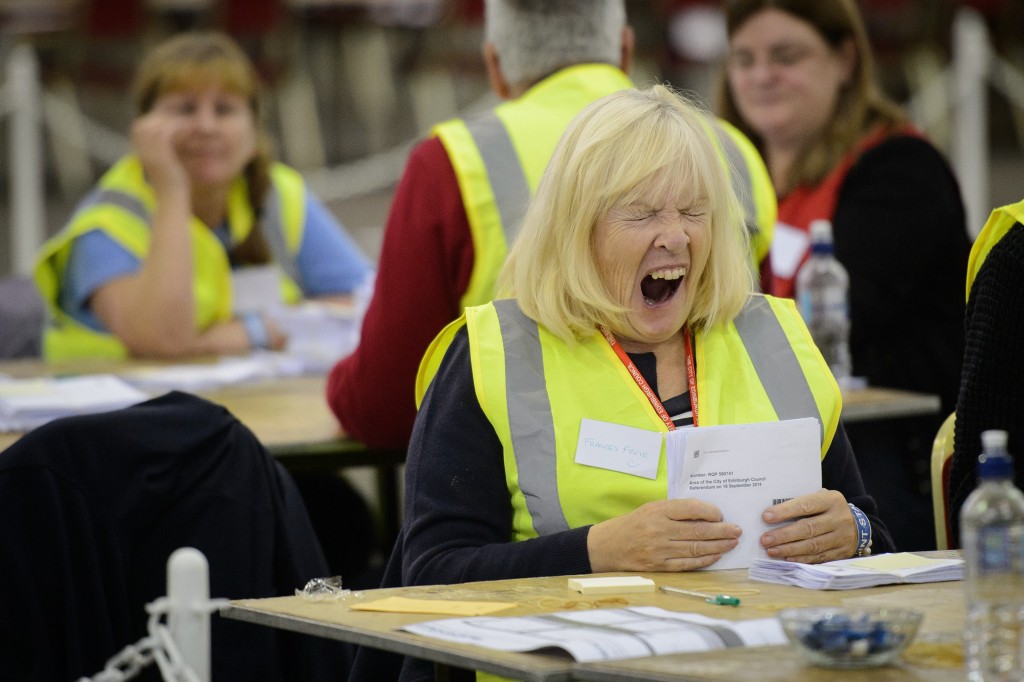 A woman shows signs of fatigue as she counts ballot cards at the Royal Highland Centre in Edinburgh. Photo by Leon Neal/AFP/Getty Images

Twitter was a buzz with cheeky memes featuring Mel Gibson as the Scottish hero “Braveheart” and photos of sad Scots wrapped in the Scottish flag:

This is going to send Mel Gibson over the edge. #ScotlandDecides pic.twitter.com/f5hJhPEXti

#Scotland has changed its Facebook status from "married" to "it's complicated".#indyref pic.twitter.com/kP9Gg0dtNO

Left: The ecstasy: Pro-union supporters celebrate as Scottish independence referendum results come in at a "Better Together" event in Glasgow. Photo by Andy Buchanan/AFP/Getty Images