LONDON — It seems to have been more like a typical Saturday night than a drunken New Year’s Eve.

The reopening of pubs in England does not seem to have overwhelmed emergency services as many had feared ahead of the biggest easing of Britain’s coronavirus lockdown. But one senior police officer said Sunday it was “crystal clear” that drunk people struggled, or ignored, social distancing rules.

For the most part, people appeared to abide by the rules and rejoiced at the chance Saturday to lift a pint in the company of their mates. but in some places large crowds raised concerns that the deadliest outbreak in Europe may find fresh legs.

“As long as everyone’s keeping their distance, we’re going to have a few drinks and just enjoy it and try and get back to a bit of normality,” he said.

Health Secretary Matt Hancock said the vast majority of people did “the right thing” and abided by social distancing rules to stay at least one meter (over 3 feet) apart from members of another household if other safety measures were in place such as hand sanitizers.

“It was really good to see people out and about and largely, very largely social distancing,” he said on Sky News.

Police forces across the country said on the whole there were no significant issues.

“It’s vital that we don’t lose track of how far we have come and all act responsibly and play our part to minimise the spread of coronavirus,” said Bas Javid, a commander at London’s Metropolitan Police.

John Apter, chair of the Police Federation, who was on patrol in the southern England city of Southampton, said it was a busy shift, one that saw officers having to deal with naked men, “happy” drunks as well as “angry” drunks. He said the shift “managed to cope” but it was “crystal clear” that those who have imbibed one too many cannot, or won’t, socially distance.

Pubs and restaurants worked hard to get ready for the moment, spacing tables, putting some staff behind plastic counters and registering customers upon arrival. The wearing of masks is optional though, even for staff.

Rafal Liszewski, a store manager in the London district of Soho, voiced concerns about the swelling crowds on Saturday. 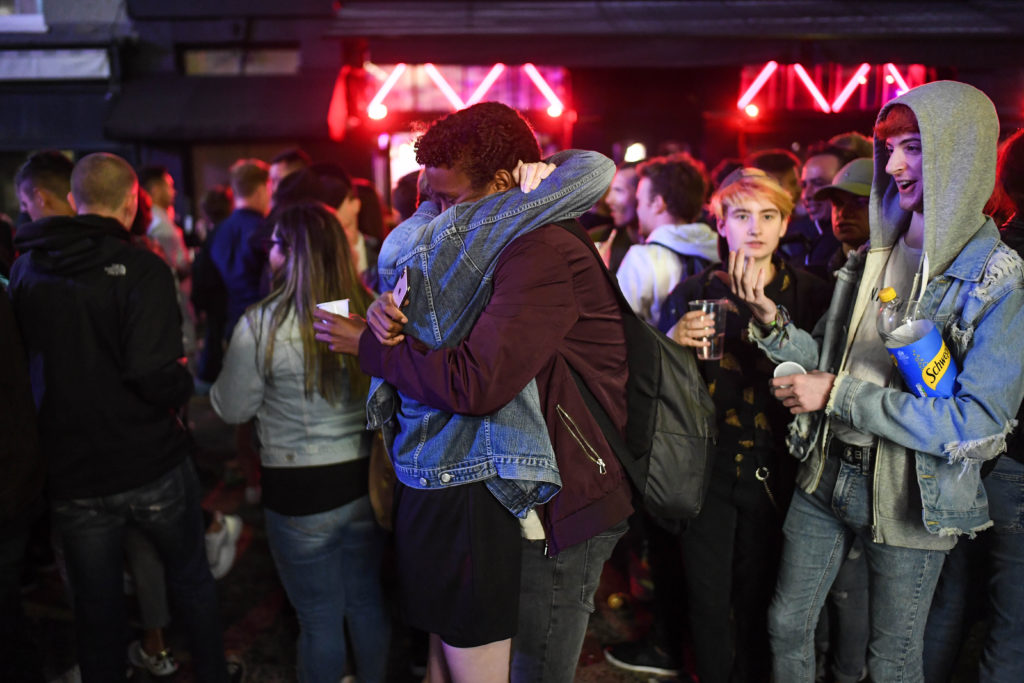 LONDON, ENGLAND – JULY 04: Two revellers are seen hugging outside a pub in Soho on July 4, 2020 in London, United Kingdom. The UK Government announced that Pubs, Hotels and Restaurants can open from Saturday, July 4th providing they follow guidelines on social distancing and sanitising. Photo by Peter Summers/Getty Images.

“Quickly everything got out of control and by 8-9 p.m. it was a proper street party with people dancing and drinking,” he said. “Barely anyone was wearing masks and nobody respected social distancing …. to be honest with that many people on one street it was physically impossible.”

Some fear the British government is being overly hasty, even reckless, in sanctioning the changes. The U.K.’s confirmed virus death toll of 44,220 is the third-highest in the world, behind the United States and Brazil. The reopening of bars and restaurants in the United States and elsewhere has been blamed for a spike in new infections.

David King, a former chief scientific adviser to the British government, criticized the latest lockdown easing. He said it looked like the strategy is to “maintain” the current level of about 3,000 new coronavirus infections per day across England in order to open up sections of the economy.

“We need to look at the fastest route out of COVID-19 and that is not the current route, and that means a better economic recovery as well,” he told Sky News.

The four nations of the U.K. — England, Scotland, Wales and Northern Ireland — are moving at different speeds out of the coronavirus lockdown. The restrictions in England, with a population of around 56 million, have been lifted the most, triggering concerns that Conservative Prime Minister Boris Johnson is being unduly influenced by a desire to kickstart Britain’s ailing economy.

Johnson’s office at No. 10 Downing Street, among many other places across the U.K., was lit up blue overnight to celebrate the 72nd anniversary of the formation of the country’s beloved National Health Service, which gives free health care to residents.

People across the country plan to clap at 5 p.m. to say “Thank you” to the hundreds of thousands of NHS staff who have worked selflessly throughout the coronavirus pandemic.

A Spitfire, the iconic World War II fighter plane, plans to fly over several eastern NHS hospitals, finishing over Cambridge, with the message “Thank U NHS” painted on its underside.

After coming down with coronavirus himself, Johnson credited NHS workers with saving his life. He was hosting a garden party for the NHS later Sunday.

Left: LONDON, ENGLAND - JULY 04: People are seen queuing to get in a pub on July 4, 2020 in London, United Kingdom. The UK Government announced that Pubs, Hotels and Restaurants can open from Saturday, July 4th providing they follow guidelines on social distancing and sanitising. Photo by Peter Summers/Getty Images.