KUWAIT CITY, Kuwait | The United States, along with more than 27 other countries from four different continents, began Sunday the largest ever military exercise aimed at practicing how to find and destroy sea mines in the waters of the Middle East.

“This is about exercising capabilities that we want to exercise with our partners in the region,” said Pentagon spokesman George Little this week. Earlier this summer Little stressed that this training was not aimed at delivering a message to Iran.

However, with tensions heating up with Iran, and Israel threatening to bomb Iran’s nuclear facilities, a number of observers say the maneuvers at sea are aimed at Iran, and could be a dress rehearsal for war with the Islamic Republic.

“I think it’s a signal to Iran,” countered Scott Truver, an expert on navy operations and mine warfare. “Despite the fact that the Department of Defense indicated that it’s not directed at Iran … it is sending a good signal to potential adversaries that we can deal with any threat that’s thrown at us, particularly if it’s the mine threat.” 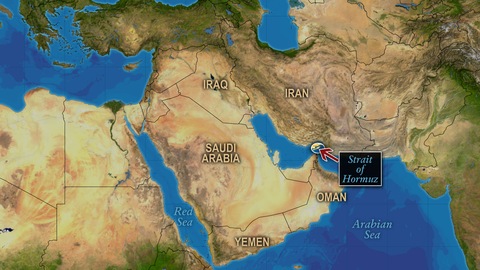 The military command staging the exercise says the military scenario will “focus on a hypothetical threat from an extremist organization to mine the international strategic waterways of the Middle East, including the Red Sea, the Gulf of Aden, the Gulf of Oman, and the Persian Gulf, although exercise activities will not extend into the Strait of Hormuz.” 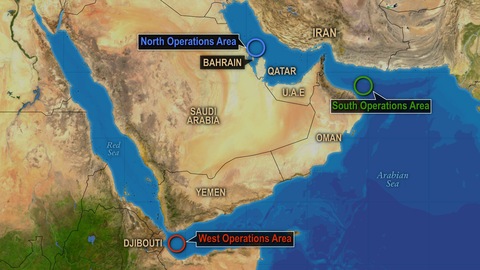 The Pentagon has beefed up its deployments aimed at countering Iran over the past year. This summer, the Navy doubled from four to eight the number of dedicated mine-hunting ships in the Persian Gulf. It also deployed a newly converted ship, the USS Ponce, to serve as a staging and command post for mine hunting operations.
It also has kept two aircraft carrier strike groups in the Persian Gulf, cutting short the home stay of one aircraft carrier in the United States in order to maintain the presence of two such vessels in the Mideast region.

“I think it is fair to say that the current level of U.S. military forces in the Gulf is certainly greater than would be expected simply for operations in Afghanistan,” said Henry Boyd, a research associate for defense and military analysis at the International Institute for Strategic Studies. “The recent additions all seem to be aimed at providing deterrent and-or contingency capabilities against Iran, and reassuring the United States’ existing Gulf allies.”

Over the past year, Washington and its global partners have heightened economic sanctions on Iran in order to pressure the country to curb its nuclear development program. In response, Iran has threatened to mine the Strait of Hormuz. Iran is believed to have 2,000 to 6,000 mines of varying sophistication.

Sea mines are floating devices that explode when they come into contact with ships.

At its narrowest point, the strait is 21 nautical miles wide. However, the two shipping channels — one for northbound traffic and the other for southbound — each measure just two miles wide and are separated by a two-mile buffer zone. 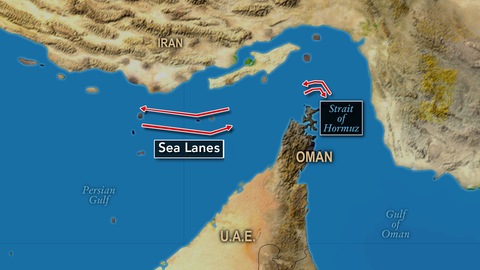 Still, Iran is unlikely to mine the Strait of Hormuz at the current time, according to a wide array of analysts interviewed for this article.

“They would be hurting themselves the most because they would be cutting off their main source of revenue, which is oil exports, at a time when they are already being sanctioned heavily and money is tight,” said Karim Sadjadpour, a senior associate at the Carnegie Endowment for International Peace.

In addition, China — Iran’s main customer for oil — would not like to see the flow of oil from the Persian Gulf curtailed, Sadjadpour said. “China is Iran’s key commercial and strategic patron and they would really alienate the Chinese” if Iranians were to mine the strait, he said.

And Tehran relies on the Strait of Hormuz for another reason: imports.

Almost all of its imported goods enter through the strait, according to Alireza Nader, a senior policy analyst at the RAND Corporation.
“Unlike a lot of Arab countries — [including] Saudi Arabia and United Arab Emirates, [which] are building pipelines that bypass the strait — they [Iran] don’t have that significant infrastructure,” Nader said. “So closing the strait would be suicidal.”

However, there is one condition under which Iran might be more likely to mine the Strait of Hormuz, according to Iran watchers: if Israel were to bomb Iran’s nuclear facilities.

“In the event of a [Israeli] military attack, there is more than [a] 50 percent chance they would attempt to close the strait or prevent others from passing through freely,” said Sadjadpour. “They don’t have that many options for retaliation. They can try to launch missiles into Saudi Arabia to spike oil prices; they can try to unleash Hezbollah and Hamas; and, if they want to hurt the world, it’s by closing the strait.”

The PBS NewsHour’s deputy foreign affairs and defense editor Daniel Sagalyn is in the Persian Gulf and will be covering the International Mine Countermeasures Exercise, which runs Sept. 16-27.