What you need to know about the potential coup in Burundi

What is happening in Burundi?

Burundi, a central African country roughly the size of Massachusetts, may be undergoing a coup that could destabilize its neighbors. The former Belgian colony’s fragile democracy was threatened this month, when its president, Pierre Nkurunziza, announced he was running for a third term in office, despite objections that it would violate the country’s constitution. In response, mass protests broke out in the country’s capital calling for his removal. While Nkurunziza was away at a conference in Tanzania on Wednesday, Army General Godefroid Niyombare announced on a private radio station that the president had been ousted and the government had dissolved.

In the capital, crowds cheered and hugged soldiers on the streets, but the police, who remained loyal to the president, clashed with those calling for him to step down, resulting in 20 deaths.

Gunfire and explosions could be heard in the country’s capital, Bujumbura, according to Reuters. A grenade attack devastated much of the private broadcasting building where Niyombare gave his radio speech, the Associated Press reported. Heavy fighting also flared close to the state broadcasting headquarters, as the two factions vied for control of public TV and radio.

The head of Burundi’s army, however, said the coup had failed and forces loyal to the president were still in control. Presidential loyalists on Thursday said they still controlled the most important strategic assets: the airport, the radio and the presidential offices, according to Reuters.

The president was also quick to dismiss the coup, calling it a joke on Twitter and said the situation was under control. On Thursday, he answered Burundians questions via the Twitter hashtag #whereisNkurunziza.

“I am in #Burundi. I salute the army and the police for their patriotism and moreover, congratulate the Burundians for their patience,” he tweeted. 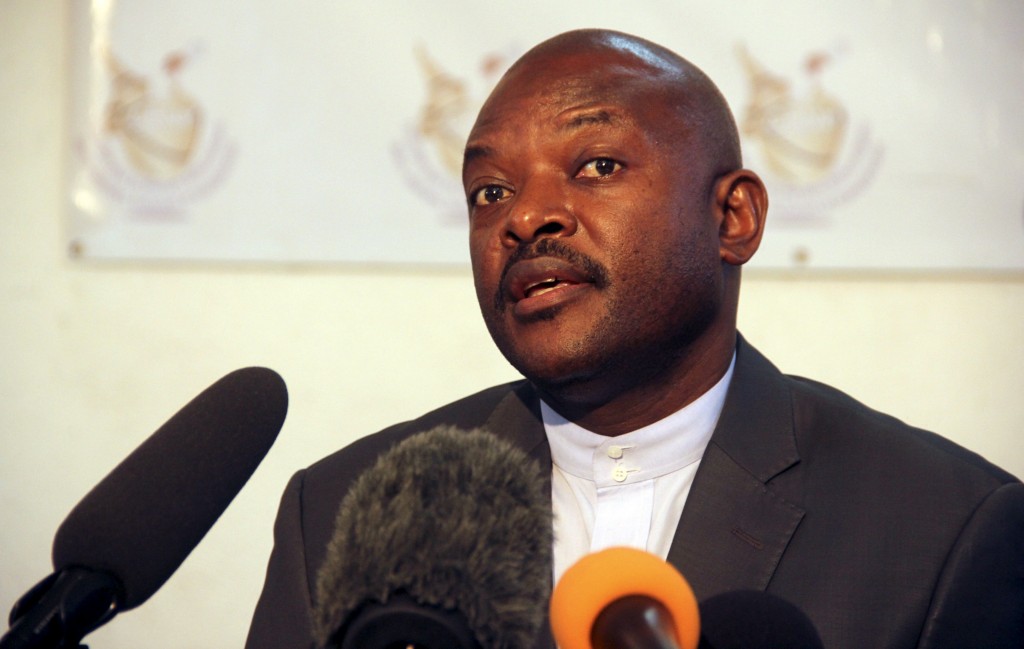 Burundian President Pierre Nkurunziza registered last week to run for a third term, in a move that stoked anger among protesters opposing his bid for another five years in office. Photo by Jean Pierre Aime Harerimana/Reuters

What is driving this conflict?

The fighting comes down to the basic question of whether the president has the right to return for a third term. Under peace accords brokered by Nelson Mandela that ended Burundi’s civil war fifteen years ago, a president elected by the public is only allowed to serve two terms. But in 2005 when Nkurunziza was appointed to power, the country was still recovering from war and agreed to hold off on popular elections for five years. Nkurunziza has served two terms since 2005, but argues that because he was appointed by the parliament, and not elected by the people, his first term did not count toward the constitution’s limit.

“What’s behind this chaos is a classic struggle for power,” said Dennis Jett, a former U.S. ambassador and professor of International Affairs at Pennsylvania State University. “In a lot of these African countries, if you are out of power, you are out of luck. When a country is that poor, there is no Heritage Foundation to sit in, until a president of your liking goes into power. There are not think tanks or academia. That tends to make these struggles very bitter.” 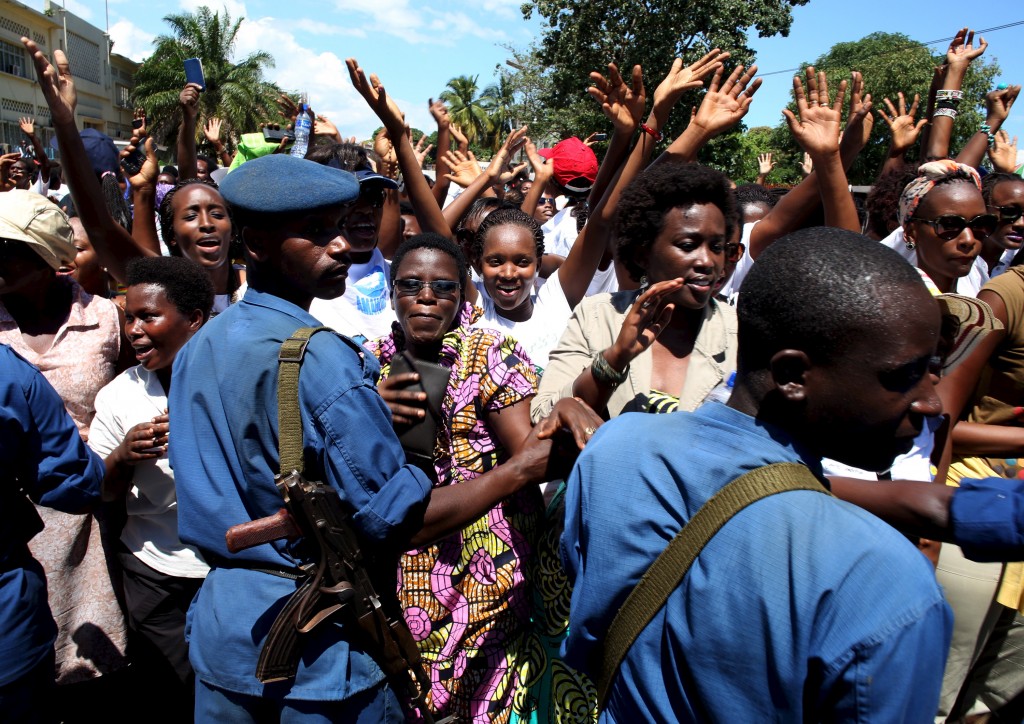 Women sing in front of police during a protest by women against president Pierre Nkurunziza in Bujumbura, Burundi, Sunday. Photo by Goran Tomasevic/Reuters

What impact could this have on the region?

Most Burundians are of Hutu ethnicity, but until recently, the Tutsi minority long controlled the government, military and economy. When the country’s first Hutu president was assassinated in 1993, the Burundi descended into a bloody civil war that killed an estimated 300,000 people and sparked sectarian violence in the region, including the Rwandan genocide. The recent political violence could reignite regional instability.

Anticipating a return to violence, 70,000 Burundians fled to neighboring countries this month, according to the United Nations. Burundi’s neighbors are still recovering from decades of war and violence themselves and may not have the capacity to absorb a wave of refugees.

“This is a hugely destabilizing factor for the entire Great Lakes region,” said Chris Fomunyoh, the Regional Director for Central Africa at the National Democratic Institute for International Affairs, an organization working to strengthen democratic institutions in the region. “We are seeing tens of thousands of new refugees fleeing into a situation that is so volatile. Ultimately the Great Lakes could convulse again into a humanitarian catastrophe and then it becomes a global responsibility for the world to be called upon to send resources.”

The ethnic divisions which have contributed to so much war and brutality in Burundi are never too far from the surface. While the violence has been political so far, with Hutus and Tutsis both for and against the president’s quest for another term, it could quickly descend into sectarian conflict.

“You never know when these things are going to spiral out of control, or be put down in a day or two,” said Jett. Even though it looks like Nkurunziza has managed to avoid a coup thus far, “it could mean that people plotting the coup could go across the border and continue to cause trouble. These things have a life of their own,” he said.

Even if Nkurunziza regains full control, the consequences for those who opposed him could be dire.

“If Nkurunziza and troops loyal to him, including police, were to re-establish total control, we might be in for a very stiff repression” said Filip Reyntjens, a law professor in Antwerp, Belgium, and an expert on the region. “It certainly doesn’t look very good for the insurgents and if the coup fails, it doesn’t look good for those who have implicitly supported the coup: Civil society, opposition parties and all of those who have advocated against him running for a third term,” he said.

What does this mean for the United States?

The United States condemned the violence and called on all sides to “lay down arms, end the violence and show restraint.” The U.S. has helped train and equip the Burundian army, according to Reuters, and critics say that aid has beefed up the military at the expense of civil society. “We are building up the military of these countries where all other institutions are weak, and so we end up in a process where, when things go wrong, the military takes over,” said Jett, who presided over civil wars and peacekeeping in Liberia and Mozambique as a U.S. diplomat. “We have tons of money for military aid but never enough for democracy and building institutions,” he said.

Still, some argue that the cohesiveness of Burundi’s ethnically diverse army in the face of the current political crisis is the only thing preventing the country from collapsing into civil war.

“My broader view is that I see the military and the security sector as a vital component of the democratic governance process. In countries where you support civil society, political parties and the media, you need to invest in reforms in the security sector, because as we see all too often, they are a determining force in whether the country moves forward or not,” said Fomunyoh.

“In the past two weeks in Burundi, we have seen the military play a positive role by interposing itself between the demonstrators and the police. Where the police were considered more biased and partisan in favor of the president, the military is seen by most Burundians as more neutral and more professional, making sure the demonstrations are more peaceful.”

Stimulus aid for small businesses will go to some big chains

Back-to-back disasters: tornado and virus push Tennesseans to the limit