A volcano began erupting in January off the coast of Tonga, a Polynesian sovereign state in the South Pacific Ocean that is comprised of 176 islands. The underwater eruption was so large, it sent a pillar of ash into the sky, canceling all international flights to and from the island.

In fact, the volcano actually moved above water during the eruption to form a new island. 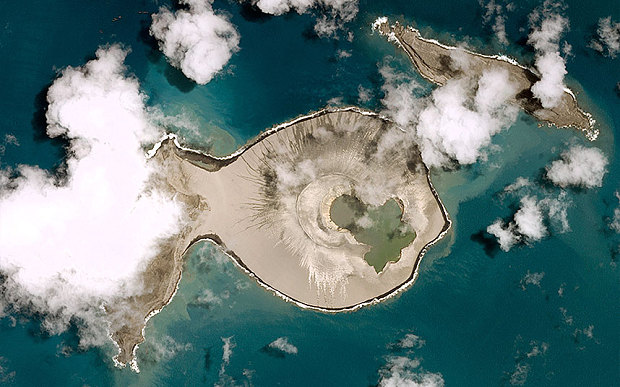 After the eruption the volcano created an above water crater that conjoined with the island on the left creating a new, larger island. Photo courtesy of Pleiades

Now, several months after the land mass emerged above the blue waters of the South Pacific, three men have climbed to the crater’s peak and snapped the first photographs of the new land.

Speaking to Radio Australia’s Pacific Beat, Orbassano said, “We had a beautiful view of the volcano, which inside is now full of green emerald water, smelling of sulphur and other chemicals. The view was fantastic.”

The island is about one-mile long, a half-mile wide, and about 820 feet above sea level. 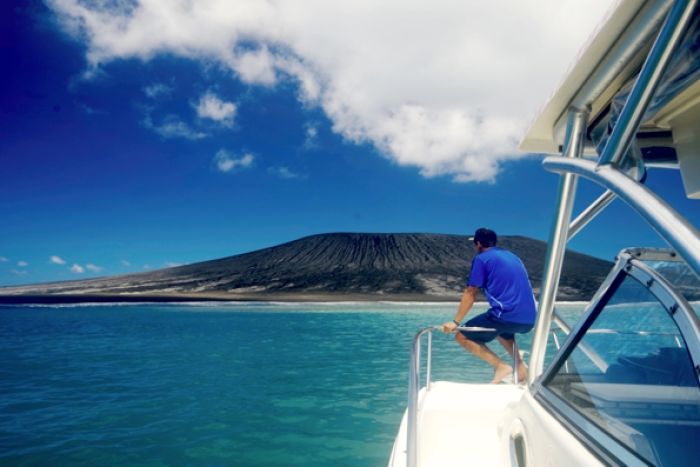 G.P. Orbassano, a local hotel owner, took a boat to the island with a friend and his son. Photo courtesy of G.P. Orbassano

Made of ash the ground was unstable to walk on and has lots of deep channels, and Obrassano said a green crater lake smelled strongly of sulphur. Orbassano also said he thought the island would become Tonga’s newest tourist attraction.

“It’s going to be amazing for tourists to go on top, it’s a really different experience and it’s not so far away [from the capital],” he said. “It’s amazing. It’s really something, this volcano.”

However, if tourists are interested in going, they should book flights now because the island will likely erode back into the ocean over the next couple of months because it is composed of ash, not lava. Clive Oppenheimer, a professor of volcanology at the University of Cambridge, told the Telegraph that the land could survive for several weeks.

“When a volcano erupts in the sea, it’s very explosive, which makes a lot of ash,” he told the Telegraph. “If it goes on long enough, the later eruptions can be lava rather than ash. And that is when land will form.”

There is some hope that the island might become a permanent part of Tonga’s geography. In 2013, the volcanic island known as Nii-jima appeared off Japan’s coast and was also expected to erode away. Instead, it has grown over 10 times its original size and even swallowed another volcanic island nearby.

Volcanic islands are still rare and important to volcanologists to learn more about volcano’s fickle nature. They have also formed the center of international disputes.

In 1831, an island emerged off the coast of Sicily. It was discovered by the Royal Navy and was claimed by the United Kingdom. Graham Island, the name the British gave it, was soon in a four-way territorial dispute between the United Kingdom, France, Spain, and the Two Sicilies.

The dispute was never settled because the island disappeared underwater again in 1832.

Left: This is a pre-eruption satellite image of two islands that help make up Tonga. Photo courtesy of Pleiades