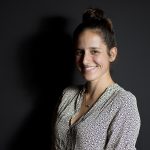 MAIDUGURI, NIGERIA — At a clinic in Northeastern Nigeria, malnourished children wail from their beds, their mothers nearby. The cries are a good sign; they mean the children are improving, said Carmen Yip, an emergency health and nutrition coordinator with the International Rescue Committee. A cry means a child is responsive — closer to life than death.

The clinic has 23 beds available for children under five who need treatment for life-threatening complications of severe acute malnutrition.

Humanitarian organizations have said as many as 75,000 children in Nigeria’s Borno and two neighboring states are at risk of dying from severe acute malnutrition over the next year if they don’t receive treatment.

Boko Haram’s years-long insurgency in northeastern Nigeria has claimed thousands of lives, but the millions of survivors must now contend with hunger, a crisis plaguing the war-torn region.

The IRC operates one of just a few clinics in Maiduguri available to help address the crisis.

“It’s so much bigger than what all of us thought,” said Dr. Javed Ali Baba, emergency medical coordinator for Doctors Without Borders, or Médecins Sans Frontières, which also has a clinic in the area.

Aid groups are just beginning to understand the scope of the crisis as more areas occupied by Boko Haram are liberated by the Nigerian military. Borno, Yobe and Adamawa, states hardest hit by the Islamic terrorist organization, are facing catastrophic levels of food insecurity.

Baba said food scarcity in some parts of the country have reached emergency levels on the U.N.’s food insecurity scale. That means northeastern Nigeria is one step away from famine.

Many of those suffering in the region are there after having fled the ongoing Boko Haram violence in far-flung villages scattered across northeastern Nigeria. According to UNICEF, more than two million Nigerians have been displaced by Boko Haram since 2014.

Among areas newly accessible to aid groups, UNICEF has seen levels of severe malnutrition among children as high as 12 percent, said Doune Porter, the chief of communication for UNICEF.

If these children don’t receive treatment, one in five, or about 75,000, are likely to die, she added. The hunger crisis could claim nearly four times the 20,000 people Boko Haram killed in its seven-year insurgency. 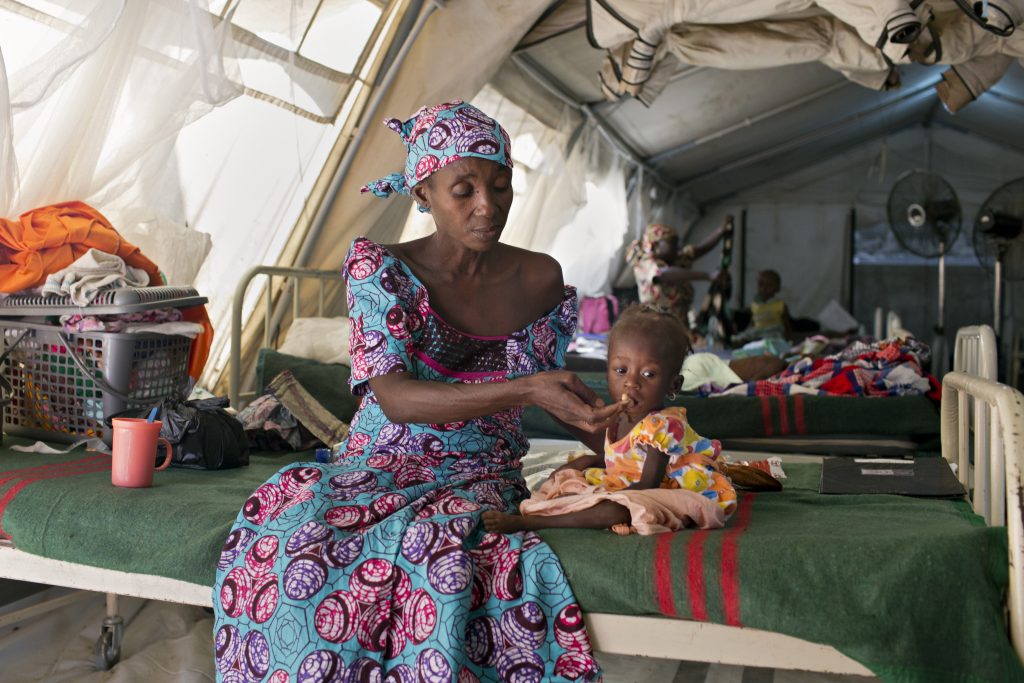 Aishatu, whose 9-month-old child Aja is being treated for severe malnutrition at an MSF clinic, says her biggest challenge is poverty. This is Aishatu’s second time seeking treatment for her daughter.

“It’s as if she was getting better. But when we returned home, the conditions came back,” said Aishatu, pointing to a gaping wound on her daughter’s head. Aja doesn’t eat and has had bouts of diarrhea and vomiting, Aishatu said.

“Malnutrition can lead to complications such as the breakdown of skin due to a lack of proteins that cause cracks and infections,” Yip said, adding that people may need to return to a clinic because of food shortages at the household level.

Borno always had issues with food insecurity, but not to the extent we see today, Baba said, citing health demographic surveys from 1996 to 2013 that show health inequity in the region.

The number of Nigerians facing severe food shortages has tripled since March of this year, pushing past the one million mark, according to the latest analysis by the U.N. Food and Agricultural Organization. The U.N. estimates that another 65,000 people are living in famine-like conditions. 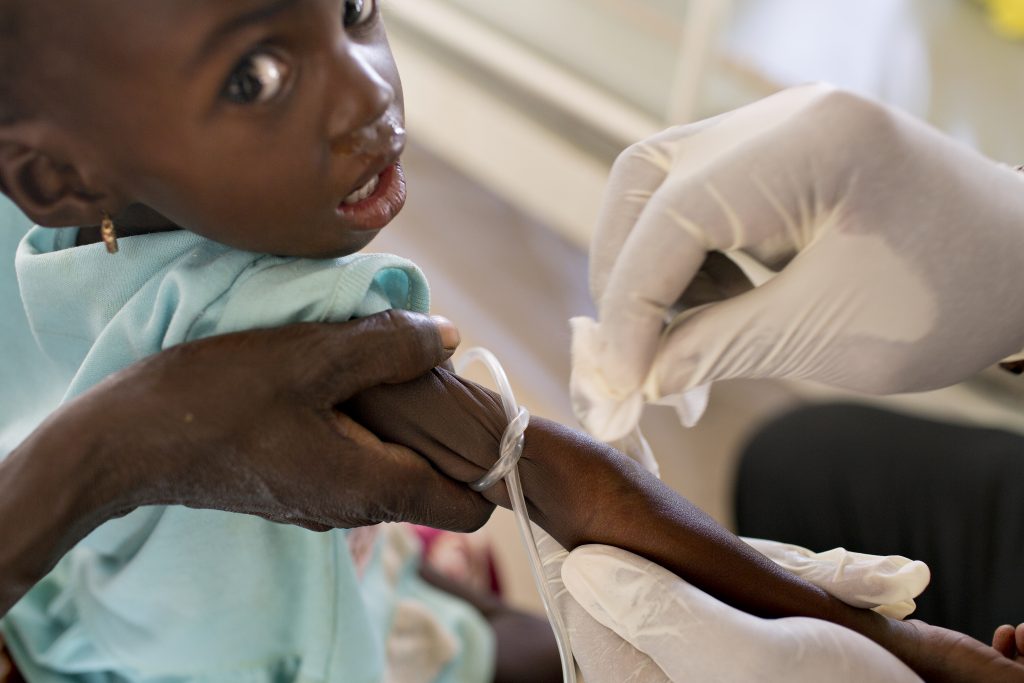 Seven-month-old Aisha receives an IV at an MSF clinic in Maiduguri that treats children suffering from severe malnutrition. Photo by Danielle Villasana

A nurse prepares to attach an IV to 7-month-old Aisha, who was brought to the MSF clinic by her grandmother, Maryamu Yakubu.

The family fled their village due to Boko Haram violence and settled on the outskirts of Maiduguri, the capital city of Borno and where the Islamic terrorist group began.

“We have lots of problems. The fact that we fled our land and settled in a place with small rooms made out of straw is a problem. Also, we have no food, we are just struggling to survive,” Yakubu said.

“With the Boko Haram insurgency, what changed for these people is they were not able to farm anymore. A lot of these people who were displaced were sort of militarized in the camps, they were not allowed to go out for farming … and they missed the period of cultivation. This is the third year they’ve missed the opportunity to farm, so that led to unavailability of food,” Baba said.

The lack of farming opportunities and the danger of transporting goods in the region has led to an increase in food prices. That, compounded by inflation — Nigeria is currently in an economic recession — makes the challenges for an already impoverished region reeling from the effects of the Boko Haram insurgency that much harder.

The girl’s father, a butcher before the family escaped the violence, has also been unable to secure employment. “The jobs are not forthcoming,” Maryamu said. 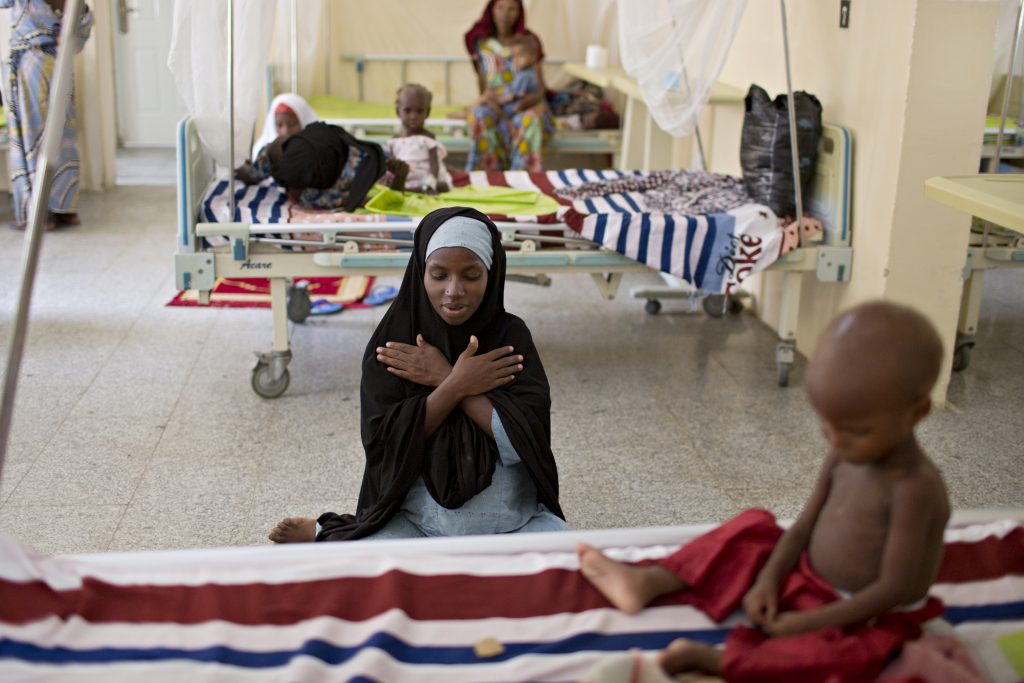 Fatima Ibrahim, center, prays near the bedside of her 2-year-old child Ibrahim, who is being treated for severe malnutrition at an IRC clinic in Maiduguri. Photo by Danielle Villasana

Fatima, 20, prays near the bedside of her 2-year-old son, who’s being treated for severe malnutrition. Despite this, his health has shown some positive signs.

“We thank God there is improvement,” Fatima, who is seven-months pregnant, said of her son, who was admitted to the IRC stabilization center earlier this month.

“It’s not necessarily directly related [to say that] violence equals no food, but it’s the moving and the loss of community and the other wide-stemming issues that lead to food being more expensive and food being less available,” Yip said.

The IRC center, which has been open for nearly two months, was seeing two deaths per night in the first few weeks. Although the death rate has dropped slightly overall, fewer people are coming in, Yip said.

“There was a greater flow of patients during the push when there was a little bit more recognition of the issue,” she said, recalling an outreach campaign led by the Borno state government that issued messages about NGO work in the area targeting malnutrition. 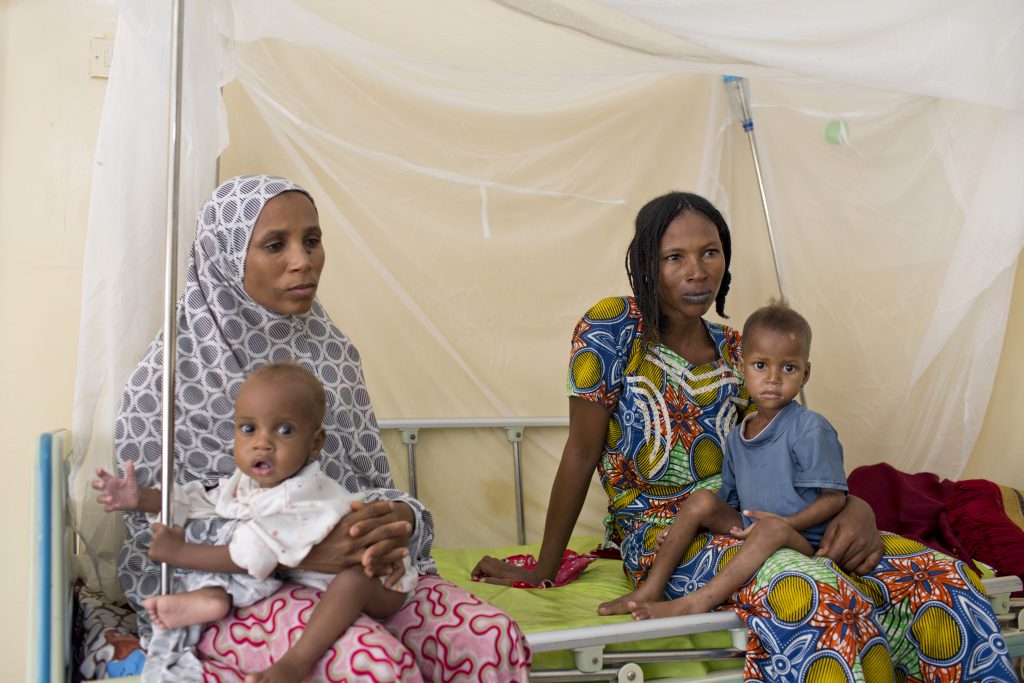 Khajidad, left, and Juday, right, both fled to Maiduguri, Nigeria, to escape Boko Haram violence. Their children are being treated for severe malnutrition at the IRC clinic in the city. Photo by Danielle Villasana

Juday, right, left her home country of Chad when Boko Haram insurgents attacked their village. Her 2-year-old son has been in the IRC center for one month and has shown signs of improvement.

Juday said they will remain in Maiduguri, because Boko Haram stole their cows, and they have nothing to go back to. Khajidad, left, also fled her home when militants attacked their Borno village of Baga.

“[My husband] used to have a fabric store in Baga, but now it’s no more. The store was burnt,” Khajidad said, adding that she had no money to buy milk for her children.

“A malnourished mother giving birth to a malnourished baby would not be able to breastfeed — another vicious cycle,” said Baba, who noted that maternal malnutrition is as high as seven percent in this region and that malnutrition doesn’t only affect children under five but is widespread across the population in northeastern Nigeria. 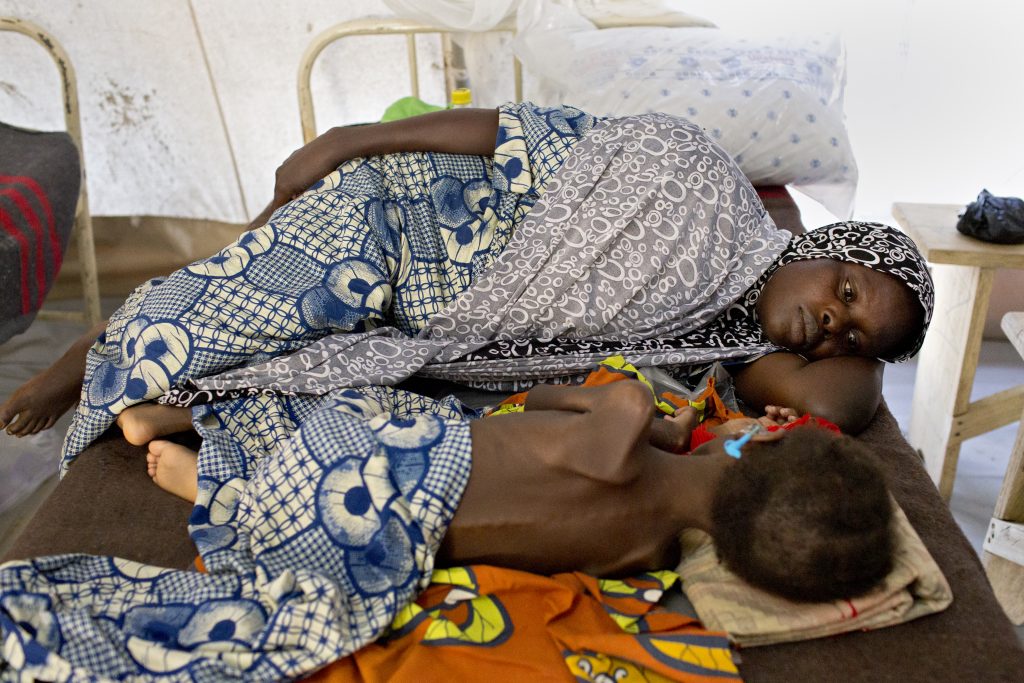 Hadiza Mohammad, 40, lies with her 4-year-old child who’s being treated for severe malnutrition at an MSF clinic in Maiduguri. Hadiza fled from her village of Gowza due to Boko Haram violence. Photo by Danielle Villasana

Hadiza Mohammed and her 4-year-old daughter Fatima look at each other while laying on the bed in the MSF clinic that treats ICU patients with malnutrition.

Fatima, who has been receiving treatment for two months, was given a blood transfusion due to low blood count and is still unable to eat.

“My biggest problem is the fact that I am living this camp life with 10 children, and there is not enough food to go around,” said Hadiza, who is an IDP from the Nigerian town of Gwoza living in the Bakassi IDP camp in Maiduguri. Her husband lives in Nigeria’s capital city of Abuja.

A large majority of women are raising their children without the assistance of a partner. In some cases, their husbands were killed by Boko Haram; in others, they’re trying to make ends meet elsewhere.

“In most of the camps, the head of household is a female who has the responsibility to earn a livelihood as well as take care of the children, so it’s a very complicated situation. That’s another thing that we really need to think about: how to support that social fabric, to have that caring capacity redeveloped. We’re still in the acute phase of the crisis, [and] we are not really paying attention to it as a humanitarian forum,” Dr. Ali Baba said. 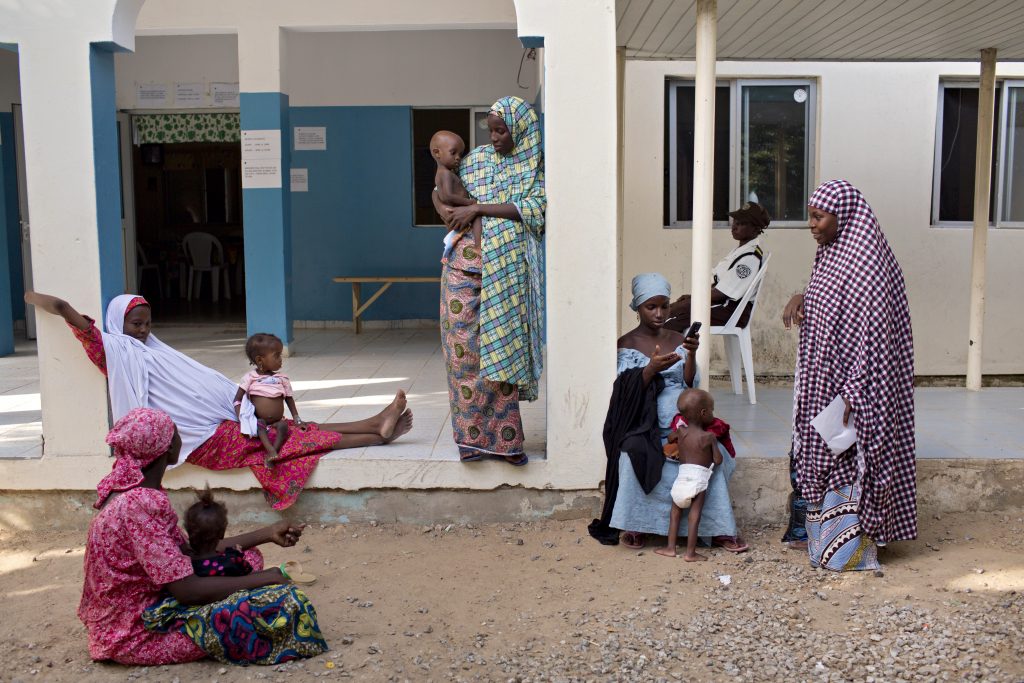 Women talk and exchange numbers outside an IRC-run clinic in Maiduguri. Photo by Danielle Villasana

On the day her daughter was cleared for discharge, Hauwa, 30, far right, zigzagged through the center like a teenager asking the other mothers for their phone numbers so they could keep in touch.

Though her daughter has improved, Hauwa worries about her well-being, because her husband is not working.

“We live in a rented house. Sometimes we feed on cassava flour, and other times we go to bed without eating anything. [My husband] is not strong. Even when he toiled on the farm, there is no harvest to show for his effort,” Hauwa said.

“Even before the insurgency, cases of malnutrition have always been here with us, but it has escalated to levels much higher than before, because the poverty has increased,” said Dr. Abdulkadir Musa Abare, who works at the IRC clinic in Maiduguri.

“What we handle is stabilization, or try to get people of out problems that they developed as a result of malnutrition. But to address the issue of malnutrition after a strife like this, I don’t think the hospital is big enough,” the doctor said.

“I think it should be approached from a different societal point of view,” he said, adding that a lack of access to education, paired with poverty and violence afflicting the area “makes it more difficult to break through the cycle.”

Left: United Nation agencies providing assistance in the region are in need of support from donors due to under financing and without emergency food aid, thousands of people are in danger of starvation. Photo by Danielle Villasana

Danielle Villasana is an independent photojournalist whose documentary work focuses on women, identity, human rights and health. She is currently based in Istanbul, Turkey.