Arabic civilization, whose “Golden Age” of the 13th to 18th centuries brought the world algebra and algorithms, doesn’t produce many Zewails these days. As the Arab Human Development Report of 2003 gloomily noted, lousy education systems in most of those countries mean that Arabs are dropping ever further behind in science.

In fact, when Zewail won the 1999 Nobel Prize for chemistry for using lasers to measure chemical reactions over infinitesimal time scales — inventing so-called “femtochemistry” — he became not only the first Egyptian but the first Arab to ever win a Nobel Prize in the sciences.

But I first met Zewail in another context — the Egyptian revolution of January-February 2011. Though he’d long before moved to the States, as a student at the University of Pennsylvania and Berkeley and then professor at the California Institute of Technology, he loved Egypt and had rushed back to witness and assist his homeland in this time of crisis.

I met him by happenstance. As I wrote at the time:

We’re sitting in the lobby lounge of an upscale Cairo hotel, littered with road-weary journalists and private security personnel. Holding court in one corner is the 1999 Nobel Prize winner for chemistry, Caltech physics and chemistry department chairman Ahmed Zewail. He’s a NewsHour fan, and invites us to join him for tea.

It’s like sitting in public with Bono and Einstein combined. We no sooner begin talking, than people begin interrupting. Ahmed, a gel-coiffed young man, rushes up flashing the V for victory sign. “Whatever you decide to do, I’m with you,” he shouts. Zewail — a dual U.S. and Egyptian citizen who is the source of tremendous national pride here — is being pressed by opposition groups to run for president. “I’m a scientist,” he demurs. “I want to serve my country that way.”

At the moment Zewail, who lives in California, has been pressed into service as an unofficial mediator between the “kids” who led the Facebook-inspired movement on Tahrir Square, and the government. He’s met with President Hosni Mubarak’s newly appointed vice president Omar Suleiman. And today he spent 3 ½ hours meeting with the Tahrir Square leaders. “This is an historic moment,” Zewail says. “This could bring new hope to Egypt. But it has to be handled very wisely.” Zewail volunteered his time to meet with the opposing forces, he says, “to see if we can find a way to get through this with a sensible transition. I don’t know if we can.” 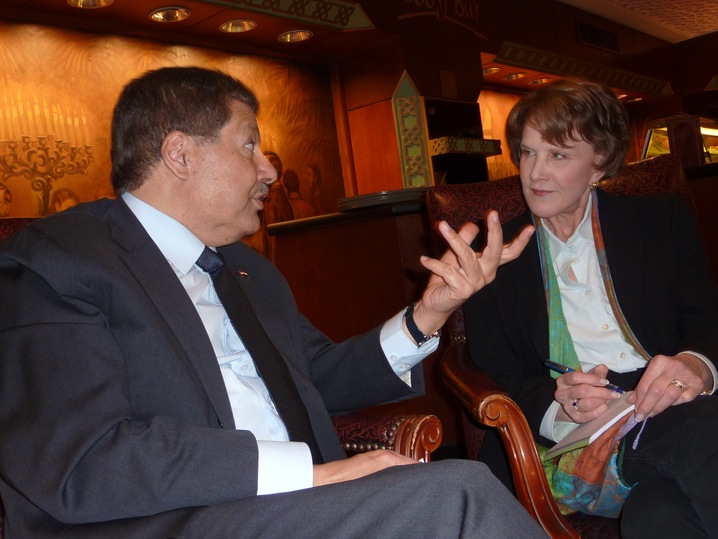 “If anyone can do it, Zewail can,” the gel-coiffed fan, a well known television journalist named Adham el-Kamouny, said to me. “He’s a rock star!”

Five years later, we all know the sad history — there was no “sensible transition” between Mubarak and the reform-minded protesters demanding change in Tahrir Square. The military took over, then the Muslim Brotherhood, then the “election” of another strongman of military background, former Gen. Abdel Fatah al-Sisi. A sad return to full circle.

Zewail, by the way, was barred from even running for president because of a new law specially generated to block him: he held dual-citizenship. But no matter. He was on to a new project — to create the so-called Zewail Center for Science and Technology to nurture and produce Egyptian and Arab scientists.

He sketched out his plans to me three years ago over dinner at Washington’s cozy La Chaumière restaurant. He was bursting with determination to create a place with an intellectual climate that would nurture and produce young scientists from Egypt and the Arab world. “We were once the greatest civilization on the planet,” he said. “And our young people could make it be once again. But all we’re known for now is misery and unrest.”

That same year, he wrote a blistering op-ed in the New York Times, excoriating Egypt’s leadership — and U.S. aid to its government — for spending money on creating an ever-stronger security state rather than enhancing education. “A part of the world that pioneered science and mathematics during Europe’s dark ages is now lost in a dark age of illiteracy and knowledge deficiency,” he wrote.

His dream has taken off, sort of. Zewail City does have a campus. And Zewail, who had been battling illness for the last four or five years, never entirely lost hope. He wrote a piece in the Huffington Post in March, beginning with, “Knowledge makes the world go round,” and expressing his vision for a “Science Spring in the Middle East.” He concluded: “My dream is that 40 years from now, the terrible carnage now wracking the Middle East can give way to building and utilizing knowledge for the betterment of mankind.”

A full military funeral will be held for Zewail in Cairo next week. It’s a high honor usually reserved for senior military figures. But the way to truly honor Ahmed Zewail is to make his vision for a different kind of Egypt come true.