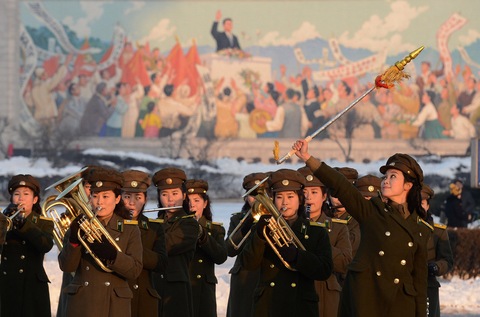 The North Korean military band celebrates the North’s rocket launch on Dec. 12 in Pyongyang. Photo by KCNA via Reuters.

Following a presidential election in South Korea this week, a number of analysts are saying North Korea is likely to commit a provocative act within the next few months to test Seoul’s resolve. There is virtually nothing the United States can do to head off any such destabilizing move, according to the specialists. “The North Koreans tend to do provocations within 16 to 18 weeks of every South Korean election, going back to 1992,” said Victor Cha, a Center for Strategic and International Studies senior adviser and Korea chairman, at a CSIS panel discussion on Thursday.

“North Korea always tests the new South Korean leader in various forms,” echoed Scott Snyder, a senior fellow at the Council on Foreign Relations who spoke at the same CSIS-sponsored event. “They want to figure out what the parameters are of the relationship and, frankly, what they think they can get out of it.”

Asked if the U.S. military should do something to signal the North Koreans not to do anything provocative, Cha said there were no good options.

While America has effectively deterred a second North Korean invasion of the South, the United States has been unable to prevent the North from launching pinprick-type attacks, according to Cha.

However, some other North Korea analysts interviewed this week rejected Cha’s assessment.

The North Koreans could just as “equally come out with a major proposal — we call it ‘smile diplomacy'” — in which they “imply that the past is past, and we should start afresh and anew with the New Year,” Robert Carlin told the PBS NewsHour. Carlin is a former State Department and CIA intelligence analyst who has followed North Korea for almost four decades and has made 25 trips to the secretive country.

“They could come out with something big like that in February and then, depending on how the South Koreans respond to it, the situation will go one way or the other,” said Carlin. “So there nothing preordained about how the North Koreans operate.”

Asked if the Pyongyang regime has a pattern of acting provocatively after South Korean elections, Carlin said, “I certainly never saw anything that calculated by the North Koreans.”

Cha, who served as director for Asian Affairs at the National Security Council during the George W. Bush administration, cited a number of past examples of the North’s reaction:

Carlin responded that simply marking these events on a calendar is insufficient for understanding them.

“It’s not just when did they occur, but what was going on and what was South Korean policy or statements or position at the time which may have fed into this?” Carlin said. “All these incidents happen in a context; that is, they don’t come out of nowhere. Sometimes they are in response to South Korean actions or words, or proclamations. Sometime it’s reactive. It’s not just a North Korean initiative. So you really have to examine each one of these things to understand its genesis and how it fits. You can’t just pull it out of the air.”

Another East Asia watcher — Joseph DeTrani, who had a career in the CIA and State Department where he focused on North Korea — said at Thursday’s CSIS event that although the North Koreans often commit confrontational acts after South Korean elections, this time might be different.

“They tend to challenge new administrations, certainly for the U.S. and ROK [Republic of South Korea], and in this instance here maybe they will change that play book, and not further escalate, not make the situation that much more tense,” DeTrani said. “Their play book is that they do escalate, [but] I’m hoping they will not escalate because they have to change that play book. There is a new government there (in North Korea) … I don’t see that recklessness coming out of the North now with this new government.”

Earlier this month North Korea fired a rocket placing a satellite in orbit — at least temporarily. The White House condemned the action calling it “a highly provocative act that threatens regional security.”

The newly elected president of South Korea, Park Geun-hye, is the nation’s first female leader. She has promised to reach out to North Korea with more humanitarian aid and deeper engagement after moving into South Korea’s presidential Blue House in February.

Park is the daughter of former South Korean President Park Chung-hee, who ruled from 1963 to 1979.