NEW YORK — Thousands descended on New York City on Sunday in support of People’s Climate March, an event organizers are calling the largest march of its kind in history.

An estimated 310,000 people braved the day’s damp and sticky conditions, and came from states around the country in advance of the U.N. Climate Summit, which begins on Sept. 23. 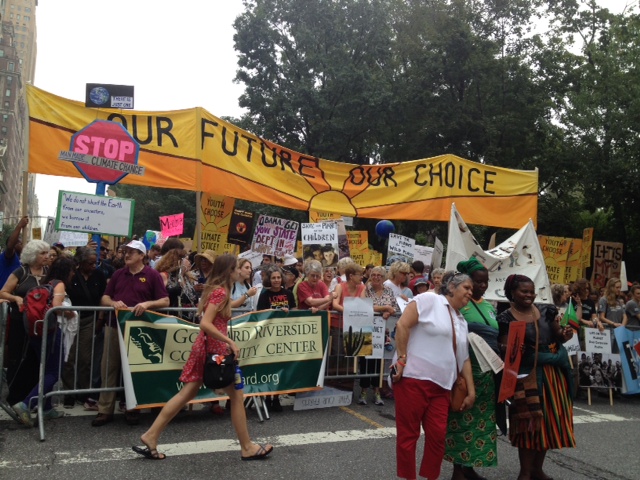 Marching alongside members of groups like the Sierra Club and Greenpeace were former Vice President, Al Gore and U.N. Secretary-General, Ban Ki-moon.

“I will link arms with those marching for climate action. We stand with them on the right side of this key issue for our common future,” said Ki-moon in a Sept. 16 press conference.

Actors Leonardo di Caprio and Mark Ruffalo were also among the marchers.

“This is not an ideological issue, it’s a scientific one,” said Peter Frumhoff, the director of science and policy at the Union of Concerned Scientists, a group based in Cambridge, Mass., that made up one of the more than 1,000 co-sponsors of the march.

The idea for the NYC event began with Bill McKibben, founder of 350.org, who wrote “A Call to Arms: An Invitation to Demand Action on Climate Change” for Rolling Stone. The article was an invitation for people to come to New York and demand action to fight global warming from the world leaders who would attend the UN Climate Summit. 350.org and AVAAZ were the lead organizers of the event.

On Sunday, similar climate events took place in more than 150 countries, including England, Australia and Brazil.

In New York, a burst of cheering followed a moment of silence at 12:58 p.m. as a way to sound the alarm on issues related to climate change. 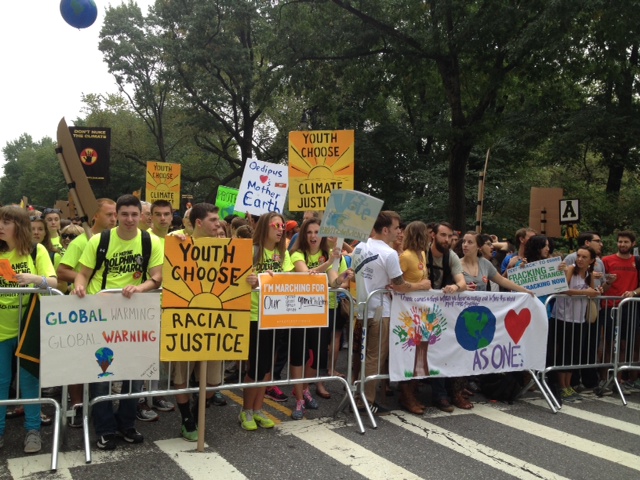 Organizers designed the march’s route around a specific narrative, arranged into communities affected by climate change in the front, groups representing climate change solutions in the middle, and groups illustrating debate over the evidence of climate change at the end.

One of the organizers who planned the route was Monica Hunken, of the Public Space Party!, who had been working with other art groups in the Mayday art space in Bushwick, Brooklyn to lay out the solutions section.

Hunken was in charge of the bike bloc, a group of cyclists who chose to ride rather than walk. The group constructed float platforms pulled by bicycles and organized pedicabs to carry senior citizens, including members of the group “New York City’s Metro Raging Grannies.”

Elsewhere among the crowd, Karen Dragon, Greta Camuso and Mercedes Orphan, who came from New Hampshire, were giving out free hugs.

Other marchers included members of Science Stands, a group of scientists standing up for climate science, who built a large, rolling chalkboard on which they illustrated the rise of temperatures and sea levels over time, which many consider to be scientific proof of global warming.

“I’m amazed that it’s here and looks so good,” said Thomas Gallagher, one of the chalkboard’s designers who lives in Brooklyn. 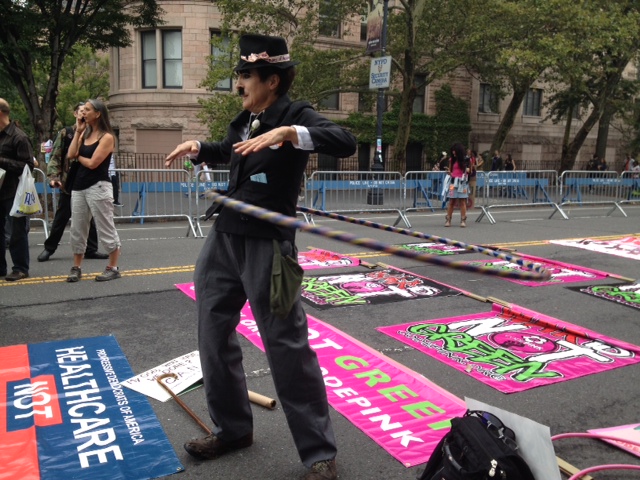 Christine Doerr, from Columbia, Mo., who was dressed as Charlie Chaplin and hula-hooped while waiting for the march to begin, boarded a bus specifically chartered by People’s Climate March on Friday. She said she attended the march because her daughter is studying environmental science at Stanford.

“These children need a chance,” Doerr said. “They need an earth to fulfill dreams, a healthy earth.”