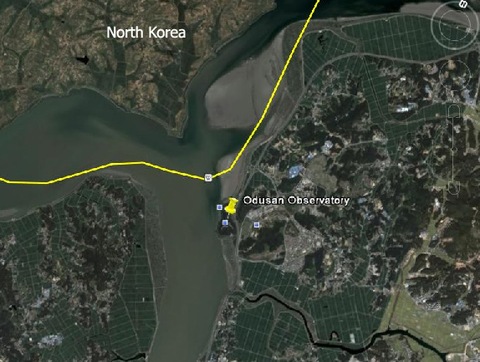 TONG-IL JEONMANGDAE, South Korea | “Look, there it is. That’s North Korea,” says Lee Hoon, standing with me and provincial Gov. Kim Moon-Soo on the observation platform of a huge stone battlement high on a hill north of Seoul. He points across an ice-floe-ridden expanse of river to a jutting promontory on the other side. Perhaps because it’s just stopped snowing, and moisture hangs heavy in the air, the point of land some two miles away looks startlingly near. 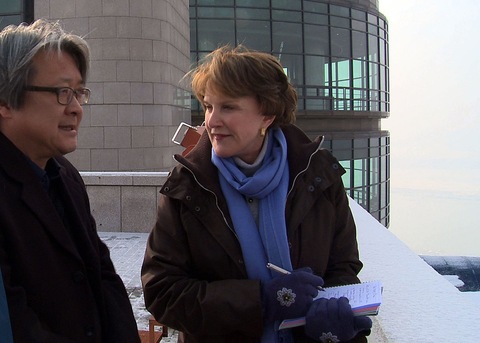 This is as close as ordinary Koreans ever get to the border that divides North and South, since it’s hard for South Korean civilians to get permission to visit the famed Panmunjom Joint Security Area inside the heavily fortified DMZ where we’re headed Tuesday. Yet even this observation post seems designed to convey an air of menace, with coin-operated telescopes providing visitors the chance to get a close-up peek at the forbidden North. On a clear day, peering out over South Korean military guardposts along the riverbank below and beyond, visitors can see a Potemkin-style farm and apartment buildings that we’re told are actually North Korean military compounds. 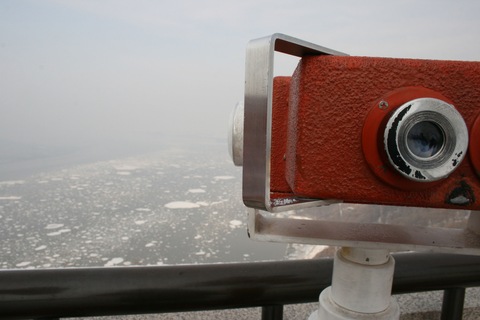 Coin-operated viewer at the observatory points toward North Korea. Photo by Larisa Epatko

Yet the official title of this observation post-and-museum complex – the Odusan Unification Observatory – sends a different, decidedly more benign message. And so does Lee. “Come, look at this,” he said, all but pulling me across the snow-covered platform to the other side. “There’s Seoul. Look how close it is.” Though it’s 22 kilometers away, on a clear day a visitor can see Seoul’s tallest building from here. The government opened Odusan in 1992, Lee explained, “because unification is a very dear matter for Koreans. It’s important to educate and remind Koreans just how close we are. The older generation knows it, but our young people, unless they see it, they won’t know.” Some 17 million South Koreans have visited since then.

For the 54-year-old Lee, formerly with the Daewoo conglomerate, his current mission as chairman and CEO of the Odusan facility is a personal one. His wealthy family was forced to flee the North when the Communists cemented control at the end of the Korean War in 1953. But his heart remains there. “It is the land of my ancestors,” he said. How does he feel about North Korea now, after it killed 50 South Koreans in recent attacks on a warship and an island? “I love the people,” he said, “but the rulers in power, I hate them.” Does he consider them the enemy? He paused. “Enemy is a very harsh term,” he said. “The North Korean government, definitely they are our enemy. But the people, I don’t think so.” 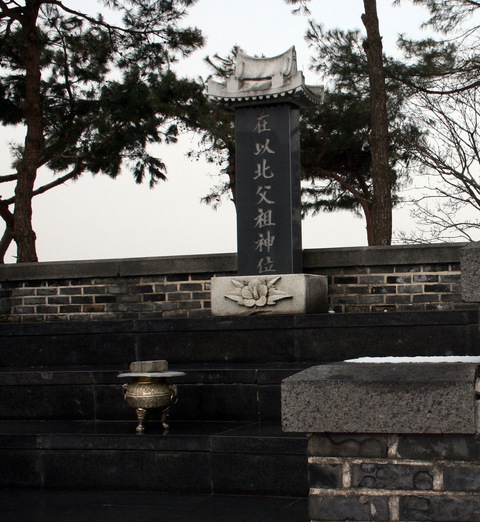 Altar for those who left North Korea for the South during the Korean War. Photo by Larisa Epatko

As we descend to ground level and prepare to leave, Lee and Governor Kim have one other thing they want to be sure I see – a large open-air stone altar. It’s a Confucian imperative for Koreans to visit their ancestors’ graves on their Thanksgiving and Lunar New Year, to worship and honor their forebears. But Southerners with roots in the North can’t fulfill that duty. “We can come here instead,” Lee said. The note of reverence in his voice said everything about the yin and yang of South Koreans’ sentiments about their racial kin, near and yet so far, on this peninsula so brutally divided more than a half-century ago.

Watch for Margaret Warner’s series of reports on North and South Korea airing soon on the NewsHour.

Over 100 arrested in Chicago during unrest following police shooting