Eaton’s win places him in the esteemed company of track and field greats Bob Mathias of the United States and Daley Thompson of Great Britain as the only athletes to earn consecutive gold medals in the men’s decathlon.

Before the final event, a 1,500-meter run, Eaton said he took a cold shower and thought to himself, “I’m willing to run myself into the hospital, if I have to, to do this,” he told NBC.

When he ran past the finish line, Eaton’s total score was 8,893 points — 59 points ahead of France’s Kevin Mayer, who took silver. Canada’s Damien Warner took bronze.

The Olympic decathlon is demanding on athletes, who have to compete in 10 events — from shot put and high jump to the discus throw and pole vault — over two consecutive, 12-hour days. When American Jim Thorpe won the decathlon at the 1912 Stockholm Games, he was unofficially dubbed “the world’s greatest athlete.”

“It’s the only event where you run, jump and throw,” Eaton once told Yahoo Sports. “To me, it’s the SAT of athleticism,” he said. 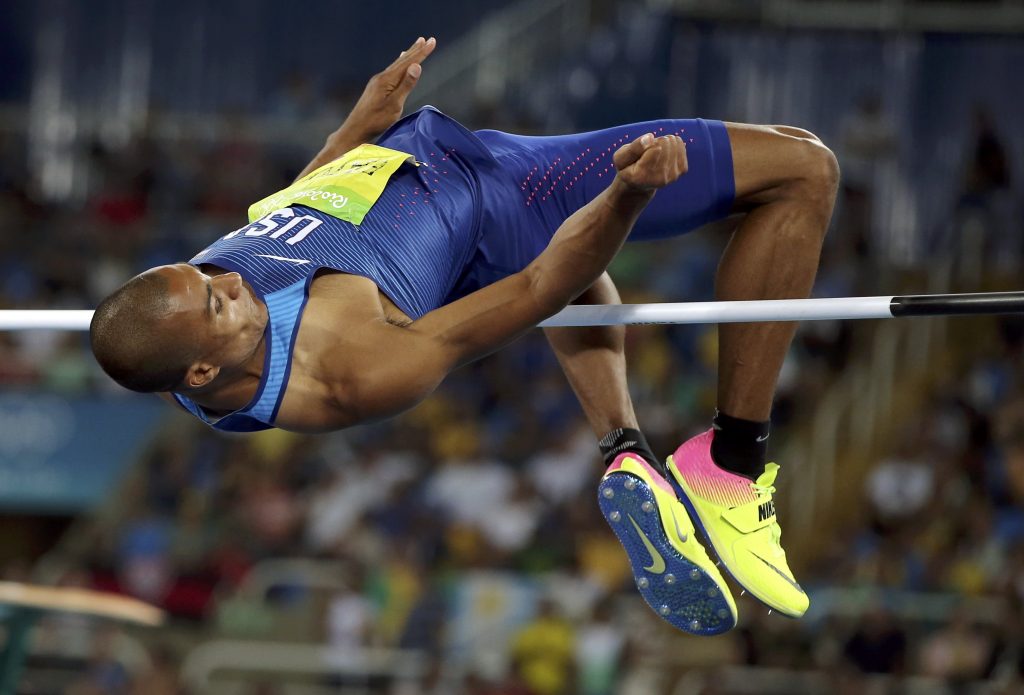 Ashton Eaton competes in the high jump on day one of the decathlon. Photo by Gonzalo Fuentes/Reuters

Eaton, who set a world record at the 2012 Olympic trials, didn’t break any personal records at the Rio Games, The New York Times reported, but did beat his final score from the 2012 London Games, earning 12 more points this time around.

After seeing his score, the 28-year-old embraced his wife, Brianne Theisen-Eaton of Canada, who won a bronze medal last week in the women’s heptathlon. 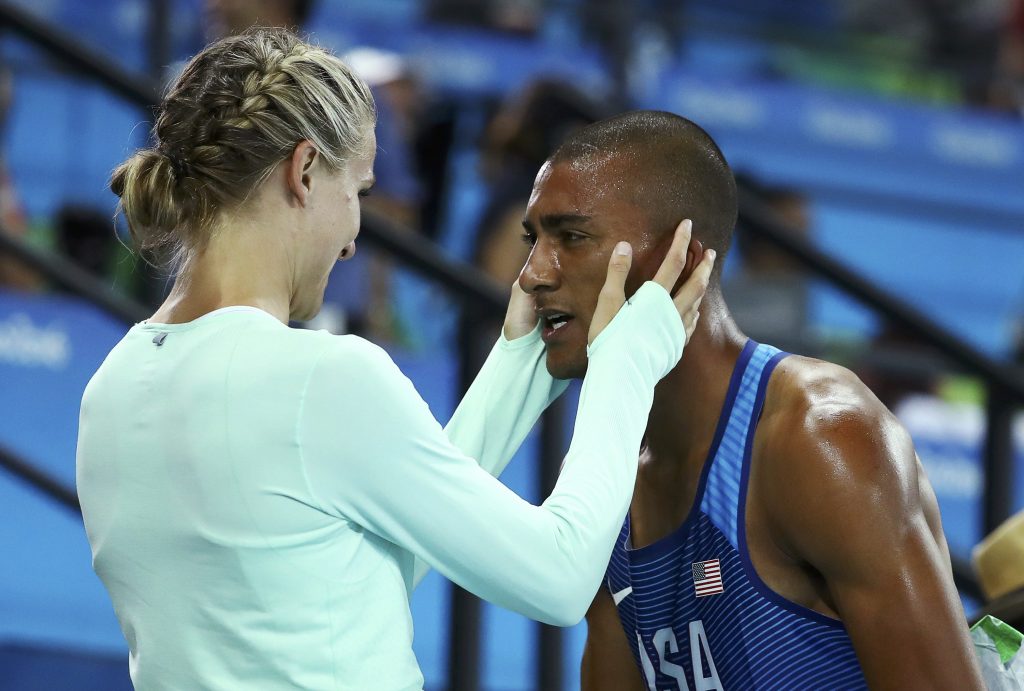 Ashton Eaton and his wife Brianne Theisen-Eaton after winning the gold. Photo by Lucy Nicholson/Reuters

When his wife competed then, Eaton wore a bright red “Canada” hat while he watched from the stands. 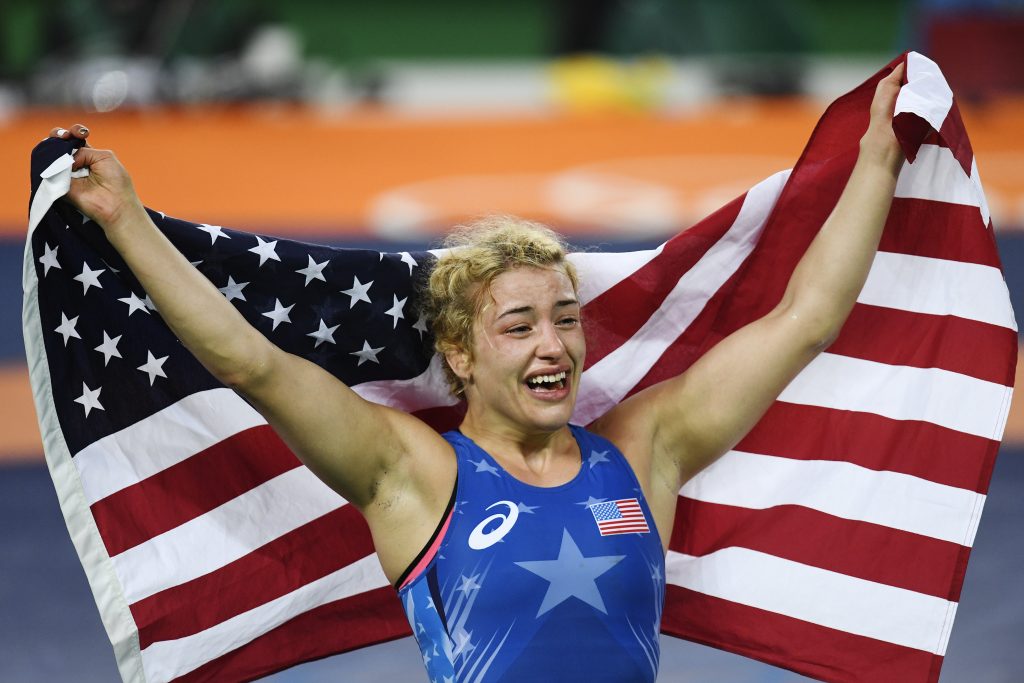 In an upset, Helen Louise Maroulis took gold in women’s wrestling, the first time for the United States, in the 53 kg weight class. The 24-year-old defeated Japan’s Saori Yoshida, 33, who is the world’s most decorated athlete in freestyle wrestling with three Olympic gold medals to her name.

“I’ve been dreaming about wrestling Saori for so long,” Maroulis said after the match. “She’s a hero … It’s such an honor to wrestle her,” she said.

Maroulis had lost to Yoshida twice before, and they hadn’t wrestled each other since 2012, the Washington Post reported. Maroulis’s personal coach told the Post that all of the wrestler’s training the past two years was focused on beating Yoshida. 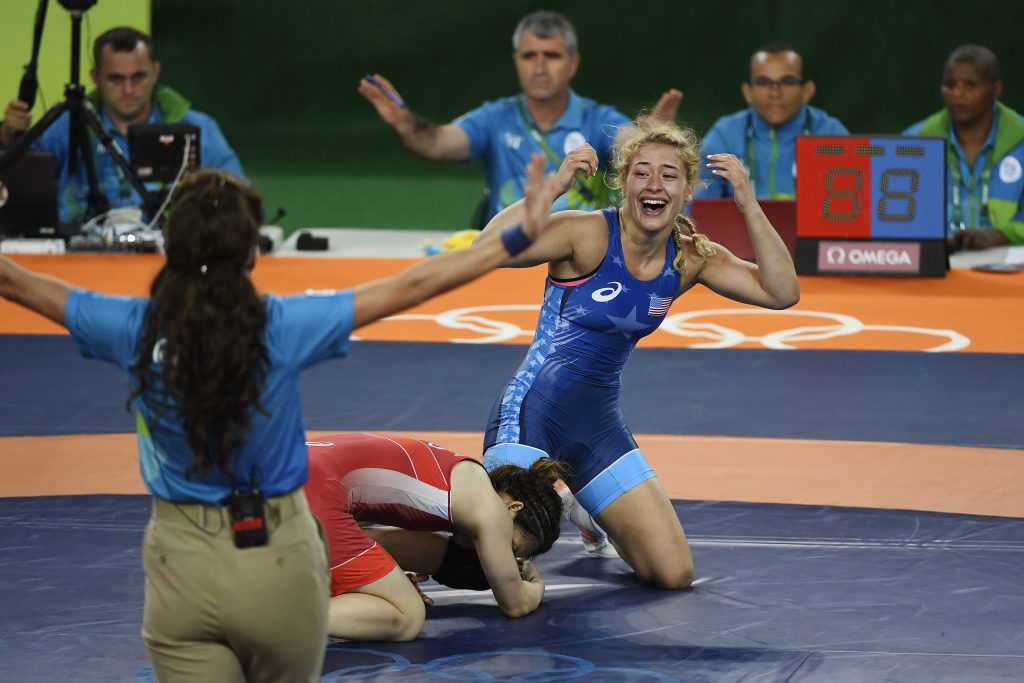 Jamaican sprinter Usain Bolt also won his second Rio gold medal — the eighth of his career — in the men’s 200 meters on Thursday. He clocked in at 19.78 seconds. Canada’s Andre De Grasse, who prompted a smile and finger wag from Bolt during the semifinals, took silver.

A day after Rio police officials discredited Ryan Lochte’s robbery claim, the American swimmer apologized for “not being more careful or candid” in how he recalled the events, the Associated Press reported.