Once alone and undocumented, teen finds family in immigration court

Minors who enter the United States alone and without proper documents face a circuitous path when seeking relief after they are stopped and detained by U.S. immigration officials.

Unlike in criminal court proceedings, the federal government is not required to provide lawyers to defendants in immigration court who cannot afford them — not even children, meaning many undocumented minors are left to navigate the daunting legal network alone.

“It would be impossible for many unaccompanied minors who have a language barrier and are completely unfamiliar with the legal system in the United States to be able to represent to the court the reasons why they’re eligible for any relief whatsoever,” said Rachael De Chacón, an attorney in New York. 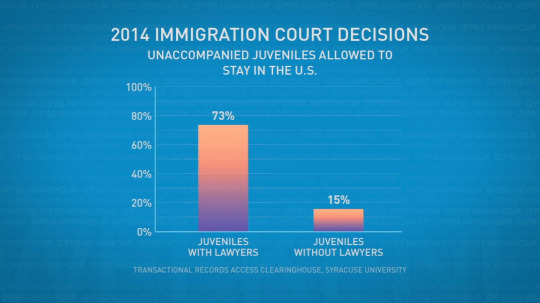 In 2015, more than 19,000 unaccompanied immigrants under age 21 filed new requests to stay in the U.S., and of that share, 62 percent didn’t have a lawyer, according to researchers at Syracuse University.

Naturally, having adequate legal representation makes a big difference before a judge.

Last year, 73 percent of immigrants under 21 with lawyers were allowed to stay, versus only 15 percent of children without lawyers.

For that lot, sometimes the only recourse is to rely on total strangers for help. And sometimes, that help comes through.

See our full report on the thousands of unaccompanied, undocumented minors fleeing brutal violence in Central America and attempting to enter the US:

Zachary Green began working in online and broadcast news in 2009. Since then he has produced stories all over the U.S. and overseas in Ireland and Haiti. In his time at NewsHour, he has reported on a wide variety of topics, including climate change, immigration, voting rights, and the arts. He also produced a series on guaranteed income programs in the U.S. and won a 2015 National Headliner Award in business and consumer reporting for his report on digital estate planning. Prior to joining Newshour, Zachary was an Associate Producer for Need to Know on PBS, during which he assisted in producing stories on gun violence and healthcare, among others. He also provided narration for the award-winning online documentary series, “Retro Report”.