PBS NewsHour will livestream updates, including news briefings, from Boston as they happen in the player above.

“We’ve closed an important chapter in this tragedy.”-President Obama to.pbs.org/ZxeNm9

Updated 10:07 p.m. ET: President Obama speaks on tonight’s arrest: “Tonight our nation is in debt to the people of Boston and the people of Massachusetts.”

Updated 9:10 p.m. ET: Confirmation of capture was followed by applause in the neighborhood of Watertown and a tweet sent out from the Boston Police Department: “In our time of rejoicing, let us not forget the families of Martin Richard, Lingzi Lu, Krystle Campbell and Officer Sean Collier.” Richard, Lu and Campbell were the three killed in the marathon bombings and Collier was the MIT officer shot late Thursday.

NewsHour will air a live updated report at 9 p.m. ET.

Suspect in custody. Officers sweeping the area. Stand by for further info.

PHOTO: A police SWAT team member readies his weapon as he stands in the middle of a #Watertown street. #manhunt twitter.com/BostonGlobe/st…

Updated 7:11 p.m. ET: Gunshots heard in Watertown, Mass as emergency and military vehicles drive through town, according to the Associated Press.

Updated 6:20 p.m. ET: State police say they believe the second bombing suspect Dzhokhar Tsarnaev is on foot and still in Massachusetts because of his ties.

Updated 6:10 p.m. ET: At an evening briefing, Massachusetts Gov. Deval Patrick says the stay-indoors-request has been lifted and that the state’s metro service will resume immediately.

Updated 5:40 p.m. ET: Outside of Watertown, Massachusetts State Police recovered “homemade explosives, including pipe bombs and another pressure cooker, as well as more than 200 spent rounds,” reports WBUR — Boston’s NPR station. Police also say Norfolk Street in Cambridge has been cleared out and that the planned controlled explosion did not happen.

Updated 4:37 p.m. ET: Earlier this afternoon, we spoke to Bob Russo, Portland Boxing Club owner, who coached Tamerlan at the Golden Gloves amateur nationals in 2009. Russo said he didn’t know the young boxer very well, but said he was very quite and “a very good athlete.”

Updated 4:25 p.m. ET: While police initially said the brothers robbed a 7-Eleven convenience store in Cambridge near the MIT campus Thursday night, they say now the robbery there was committed by someone else, according to the latest AP report. A surveillance photo they released came from a gas station where the suspects stopped.

“Why doesn’t the FBI give me more?” she asked, saying she doesn’t have enough information to convince her that her nephews are responsible for Monday’s attack that killed three and wounded 170.

Tsarnaeva, who lives in Toronto, called the FBI’s tip line, saying she believes her nephews are innocent. “They are just normal young men … athletic and smart.”

Updated 3:45 p.m. ET:With Beantown in effect paralyzed as authorities continue their search for a suspect, the Boston Red Sox and Bruins postpone their games Friday night.

Updated 3:35 p.m. ET: Tsarnaev, the deceased suspect pictured below, had studied accounting as a part-time student at Bunker Hill Community College in Boston for three semesters from 2006 to 2008, the school told the AP.

Updated 3:21 p.m. ET: Dzhokhar Tsarnaev was registered as a student at the University of Massachusetts Dartmouth and lived in a dormitory there, according to the AP. Students at UMass Dartmouth said he was on campus this week after the bombings. The university closed down earlier today along with other Boston colleges as the search unfolded.

Updated 3:15 p.m. ET: Police say they had conflicting reports on whether the brothers robbed a 7-Eleven in Cambridge, near the campus of the Massachusetts Institute of Technology, on Thursday night, according to the Associated Press.

Updated 2:43 p.m. ET: Compiled from NPR, what it looked like from inside the lockdown in Boston. 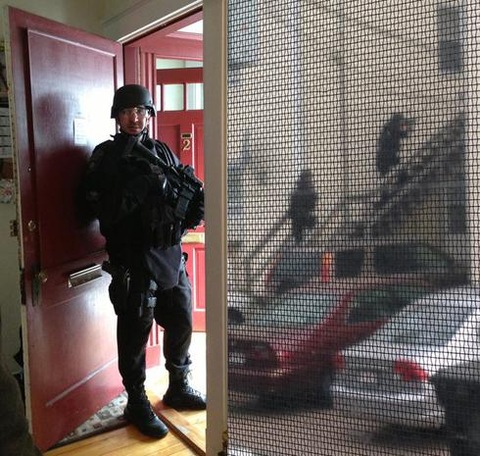 Media reporting we are looking for a Honda Civic reg 116GC7, please note that we have that car. We are not looking for it. BOLO recalled

Ain’t no love in the heart of the city, stay safe people 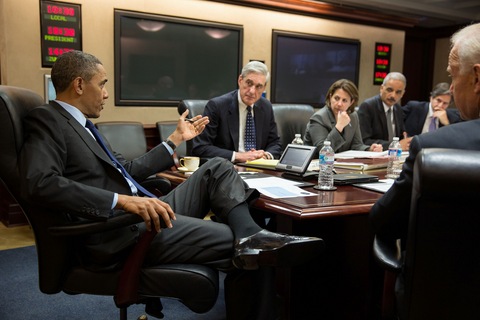 Updated 12:56 p.m. ET: At a press briefing in Watertown, Mass., State Police spokesperson Timothy Alban cautioned residents that police were staging a “controlled explosion” in Cambridge this afternoon as they continue their search for the 19-year-old suspect in the Boston Marathon bombings.

Updated, 12:06 p.m. ET: The uncle of Dzhokhar Tsarnaev, the Boston Marathon bombing suspect still at large, has urged his nephew to turn himself in. Ruslan Tsarni of Montgomery Village, Md., spoke to reporters from his driveway Friday.

“Dzhokhar, if you are alive, turn yourself in and ask for forgiveness,” Tsarni said.

Tsarni said that Tsarnaev and his brother, Tamerlan Tsarnaev, who was killed overnight, were born in Kyrgyzstan. NPR’s Pam Fessler reported that the two suspects are ethnic Chechens from Kyrgyzstan, and the suspect’s aunt told @nprnews that their family was deported to Kyrgyzstan in the early 1990s from Chechnya.

Tsarni said he hasn’t seen them since December 2005 and did not know of any possible involvement in terrorist groups or whether either had any paramilitary training. He added that his family is ashamed and that he loves and respects the United States.

Updated 11:43 a.m. ET: The name and a photo of the MIT police officer killed Thursday night have been released. Authorities say 26-year-old Sean Collier was shot and killed by the Boston Marathon bombing suspects. MIT says Collier was a Wilmington native and Somerville resident who had worked at MIT since January 2012. Before that, he was a civilian employee of the Somerville Police Department. Collier was found shot several times in his vehicle at about 10:30 p.m. Thursday.

MIT officer Sean Collier, 26, of Somerville, was identified as the victim in last night’s shooting. twitter.com/cambridgechron…

Updated 11:02 a.m. ET: Connecticut State Police say a vehicle believed to be linked to Boston Marathon bombing suspect Dzhokhar Tsarnaev has been recovered in Boston, the Associated Press reports. Elsewhere, the University Of Massachusetts Dartmouth has closed its campus and ordered an evacuation after confirming that Tsarnaev is registered there. The school says it closed the campus “out of an abundance of caution” as the search continues.

Updated 10:40 a.m. ET: Here’s a detailed timeline of events over the last 17 hours, via the Associated Press, based on reports from the Middlesex County district attorney, Massachusetts State Police and Boston police:

Updated 10 a.m. ET: The greater Boston area remained on lockdown Friday morning as police hunted for a second suspect connected to the dual bombings at the Boston Marathon on Monday.

Late Thursday night, the suspects led Boston police on a wild car chase through suburban neighborhoods before one of them, Tamerlan Tsarnaev, 26, died in a shootout. The other suspect, identified as Dzhokhar Tsarnaev, 19, of Cambridge, according to the Associated Press, remained at large and was considered “extremely dangerous.”

The men’s uncle, Ruslan Tsarni of Montgomery Village, Md., told the AP that they are from a Russian region near Chechnya and that they lived together near Boston and had been in the United States for about 10 years.

Authorities have asked residents of Newtown, Watertown, Waltham and Cambridge to remain at home, stay inside and report any suspicious activities. 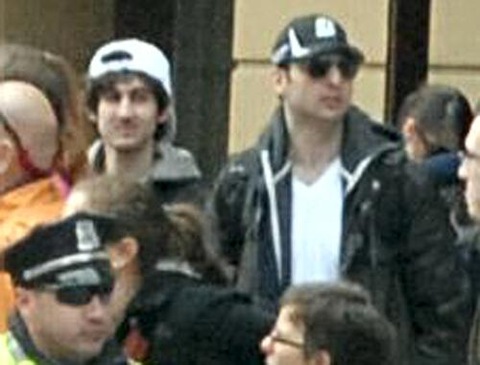 Boston Police Commissioner Ed Davis urged all residents to stay at home as the police conduct a door-to-door search for the remaining suspect and any other possible accomplices. Colonel of the Massachusetts State Police Timothy Alben said Watertown was the priority neighborhood for the search.

The suspected bombers robbed a 7-11 store in Cambridge Thursday evening. Shortly afterward, they shot and killed a Massachusetts Institute of Technology security officer, before carjacking a Mercedes SUV and then leading police on a chase through Boston suburbs.

We’ll continue to update this post throughout the day and will pick up the coverage on Friday’s NewsHour broadcast.