TOKYO — Belated and beleaguered, the virus-delayed Tokyo Summer Olympics finally opened Friday night with a dazzling display of fireworks and soaring, made-for-TV choreography that unfolded in a near-empty stadium, a strangely subdued ceremony that set a striking tone to match a unique pandemic Games.

As their opening unfolded, devoid of the usual crowd energy, the Olympics convened amid simmering anger and disbelief in much of the host country, but with hopes from organizers that the excitement of the sports to follow would offset the widespread opposition.

8 things to know about the new Olympic sports

Trepidations throughout Japan have threatened for months to drown out the usual carefully packaged glitz of the opening. Inside the stadium after dusk Friday, however, a precisely calibrated ceremony sought to portray that the Games — and their spirit — are going on. 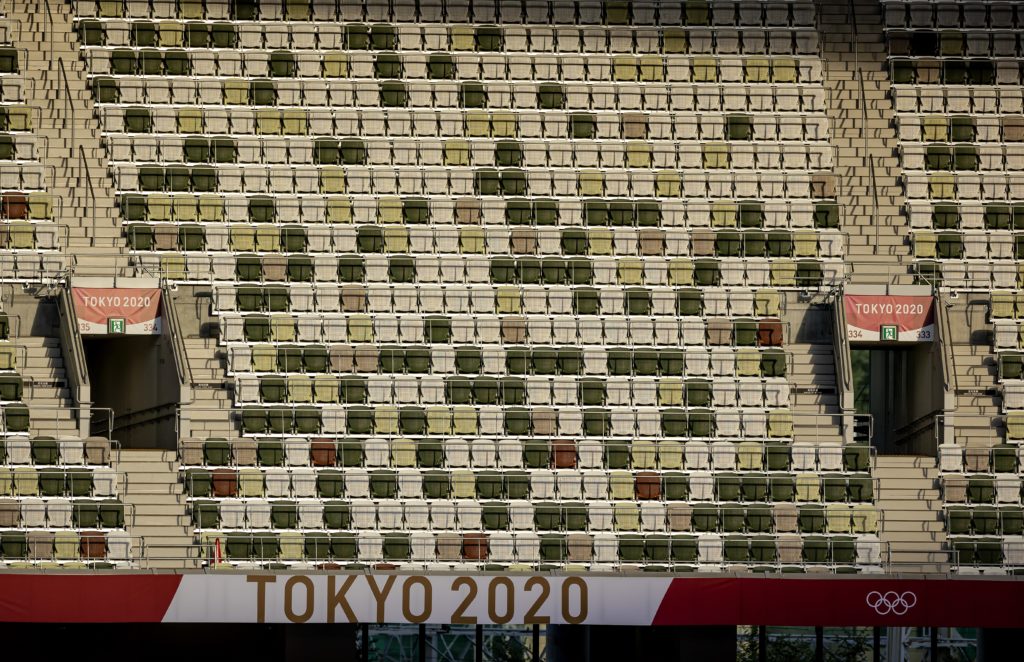 TOKYO – An empty New Olympic Stadium Meiji-Jingu Park ahead of the opening ceremony of the Olympic Games. The largest sporting event in the world has officially started. Photo by Robin Van Lonkhuijsen/ANP Sport via Getty Images

Early on, an ethereal blue light bathed the empty seats as loud music muted the shouts of scattered protesters outside calling for the Games to be canceled — a widespread sentiment here. A single stage held an octagon shape meant to resemble the country’s fabled Mount Fuji.

Organizers held a moment of silence for those who had died of COVID; as it ticked off and the music paused, the sounds of the protests echoed in the distance.

Athletes marched into the stadium in their usual parade of nations, some socially distanced, others clustering together in ways utterly contrary to organizers’ hopes. They waved enthusiastically to thousands of empty seats, and to a world hungry to watch them compete but surely wondering what to make of it all.

Their shouts raise a fundamental question about these Games as Japan, and large parts of the world, reel from the continuing gut punch of a pandemic that is stretching well into its second year, with cases in Tokyo approaching record highs this week: Will the deep, intrinsic human attachment to the spectacle of sporting competition at the highest possible level be enough to salvage these Games? 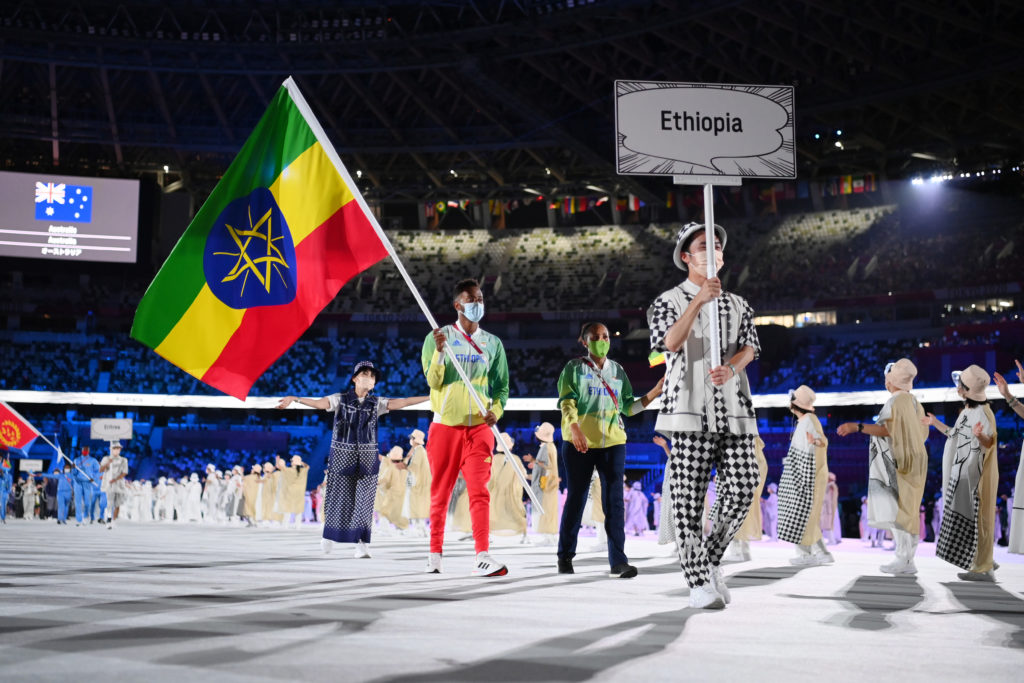 Flag bearer Abdelmalik Muktar of Team Ethiopia during the Opening Ceremony of the Tokyo 2020 Olympic Games at Olympic Stadium on July 23, 2021 in Tokyo, Japan. Photo by Matthias Hangst/Getty Images

Time and again, previous opening ceremonies have pulled off something that approaches magic. Scandals — bribery in Salt Lake City, censorship and pollution in Beijing, doping in Sochi — fade into the background when the sports begin.

But with people still falling ill and dying each day from the coronavirus, there’s a particular urgency to the questions about whether the Olympic flame can burn away the fear or provide a measure of catharsis — and even awe — after a year of suffering and uncertainty in Japan and around the world.

Outside the stadium, hundreds of curious Tokyo residents lined a barricade that separated them from those entering — but just barely: Some of those going in took selfies with the onlookers across the barricades, and there was an excited carnival feeling. Some pedestrians waved enthusiastically to approaching Olympic buses.

The sports have already begun — softball and soccer, for example — and some of the focus is turning toward the competition to come. 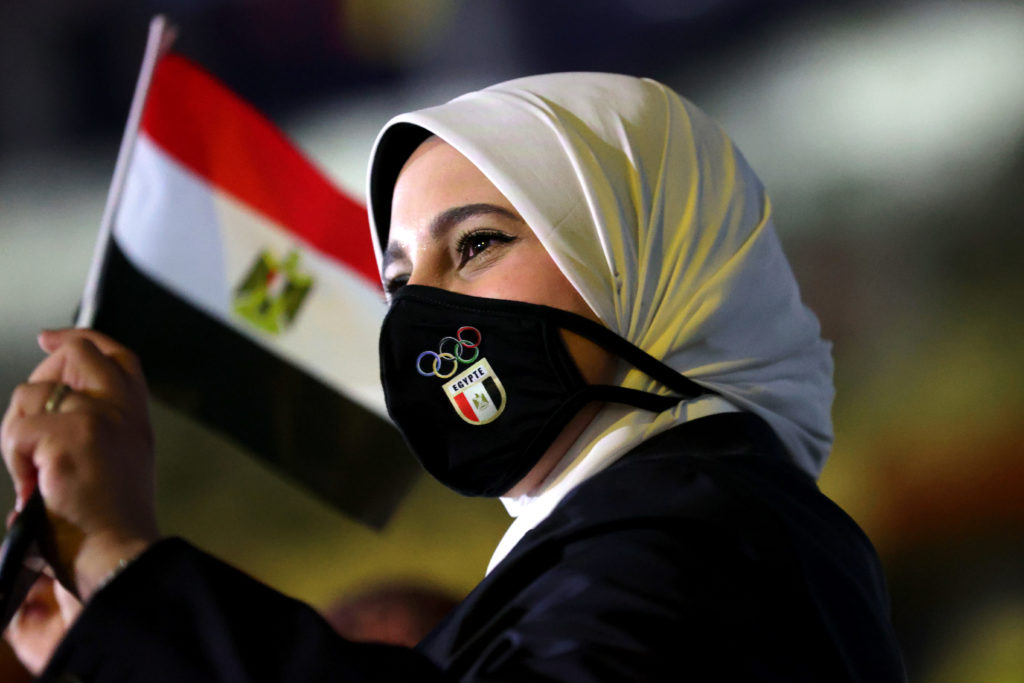 A member of Team Egypt waves a flag during the Opening Ceremony of the Tokyo 2020 Olympic Games at Olympic Stadium on July 23, 2021 in Tokyo, Japan. (Photo by Hannah McKay – Pool/Getty Images)

Can the U.S. women’s soccer team, for instance, even after an early, shocking loss to Sweden, become the first to win an Olympics following a World Cup victory? Can Japan’s Hideki Matsuyama win gold in golf after becoming the first Japanese player to win the Masters? Will Italy’s Simona Quadarella challenge American standout Katie Ledecky in the 800- and 1,500-meter freestyle swimming races?

For now, however, it’s hard to miss how unusual these Games promise to be. The lovely national stadium can seem like an isolated militarized zone, surrounded by huge barricades. Roads around it have been sealed and businesses closed.

Inside, the feeling of sanitized, locked-down quarantine carries over. Fans, who would normally be screaming for their countries and mixing with people from around the world, have been banned, leaving only a carefully screened contingent of journalists, officials, athletes and participants.

Olympics often face opposition, but there’s also usually a pervasive feeling of national pride. Japan’s resentment centers on the belief that it was strong-armed into hosting — forced to pay billions and risk the health of a largely unvaccinated, deeply weary public — so the IOC can collect its billions in media revenue.

How did we get here? A quick review of the past year and a half seems operatic in its twists and turns. 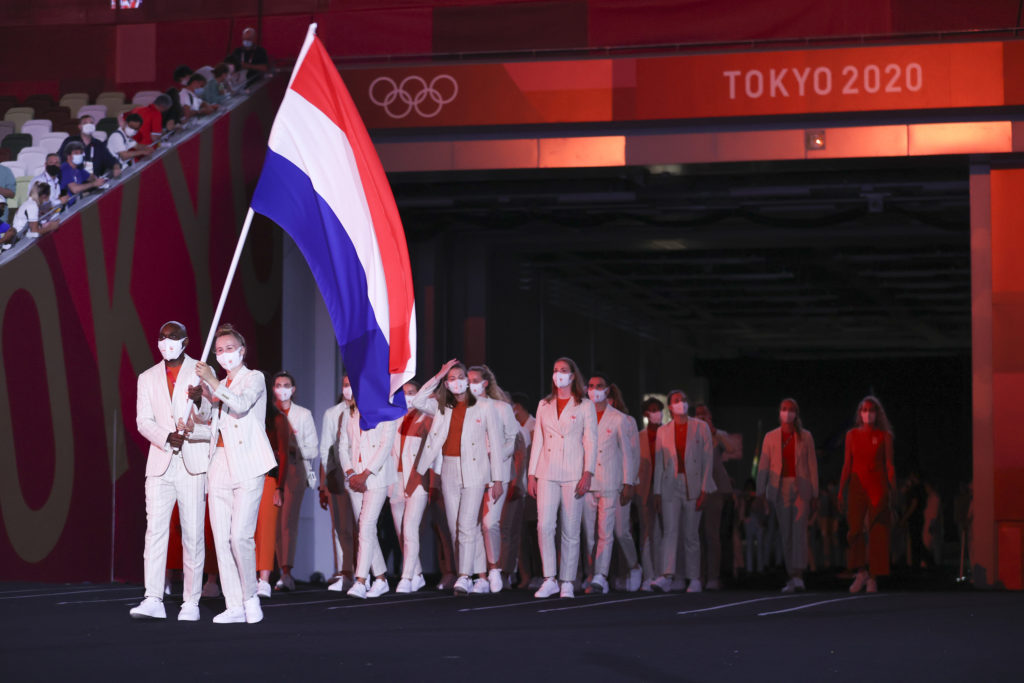 Flag bearers Keet Oldenbeuving and Churandy Martina of Team Netherlands lead their team during the Opening Ceremony of the Tokyo 2020 Olympic Games at Olympic Stadium on July 23, 2021 in Tokyo, Japan. (Photo by Jamie Squire/Getty Images)

A once-in-a-century pandemic forces the postponement of the 2020 version of the Games. A fusillade of scandals (sexism and other discrimination and bribery claims, overspending, ineptitude, bullying) unfolds. People in Japan, meanwhile, watch bewildered as an Olympics considered a bad idea by many scientists actually takes shape.

“We will continue to try to have this dialogue with the Japanese people knowing we will not succeed 100%. That would be putting the bar too high,” said IOC President Thomas Bach. “But we’re also confident that once the Japanese people see the Japanese athletes performing in these Olympic Games — hopefully successfully — that then the attitude will become less emotional.”

Japanese athletes, freed from onerous travel rules and able to train more normally, may indeed enjoy a nice boost over their rivals in some cases, even without fans. Judo, a sport that Japan is traditionally a powerhouse in, will begin Saturday, giving the host nation a chance for early gold. 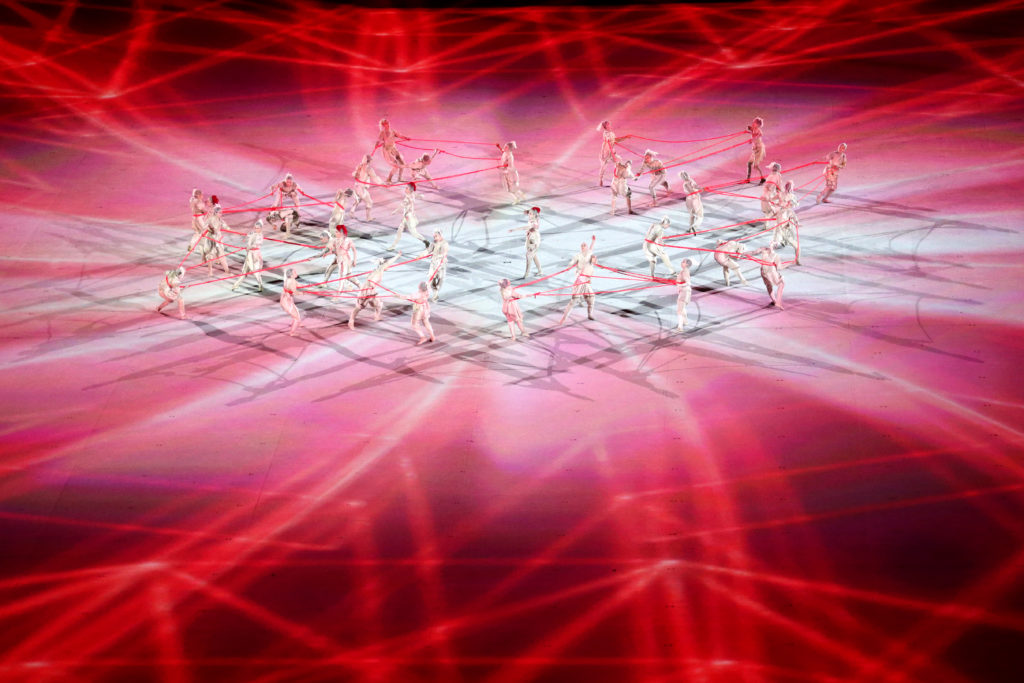 Dancers perform during the Opening Ceremony of the Tokyo 2020 Olympic Games at Olympic Stadium on July 23, 2021 in Tokyo, Japan. (Photo by Abbie Parr/Getty Images)

Still, while it’s possible that “people may come out of the Olympics feeling good about themselves and about Japan having hosted the Games against all odds,” Koichi Nakano, a political science professor at Sophia University in Tokyo, believes that such a scenario “is way too optimistic.”

The reality, for now, is that the delta variant of the virus is still rising, straining the Japanese medical system in places, and raising fears of an avalanche of cases. Only a little over 20% of the population is fully vaccinated. And there have been near daily reports of positive virus cases within the so-called Olympic bubble that’s meant to separate the Olympic participants from the worried, skeptical Japanese population.

For a night, at least, the glamor and message of hope of the opening ceremonies may distract many global viewers from the surrounding anguish and anger.

Left: A general view as teams enter during the Opening Ceremony of the Tokyo 2020 Olympic Games at Olympic Stadium on July 23, 2021 in Tokyo, Japan. (Photo by Richard Heathcote/Getty Images)