PHNOM PENH, Cambodia — The ruling party of Cambodian Prime Minister Hun Sen congratulated itself Monday on its election victory, while the opposition party unable to contest the polls said they marked the death of democracy in the Southeast Asian country, making its government and any dealings with it illegitimate.

Sok Eysan, the spokesman for Hun Sen’s Cambodian People’s Party, described Sunday’s vote on a public message sent over the Telegram chat application as a “brilliant victory” and said the country would move forward “under the umbrella of peace and political stability.”

Although 20 parties contested the election, the only one with the popularity and organization to mount a real challenge, the Cambodian National Rescue Party, was dissolved last year by the Supreme Court in a ruling generally seen as political and ensuring that Hun Sen would extend his 33 years in power by another five-year term.

The opposition CNRP, in a statement issued Monday by some of its former leaders in Jakarta, Indonesia, said that following the “sham election … what was left of a democracy in name only has been replaced with an outright dictatorship.”

The statement predicted that in reaction to the polls, foreign countries would apply punitive sanctions that would cripple the economy.

Declaring Hun Sen’s government illegitimate, it warned “governments and businesses across the world that the agreements, deals and accords signed as of today by Cambodia’s de facto regime will have no legal validity and will be revised by the future democratic government of Cambodia.” 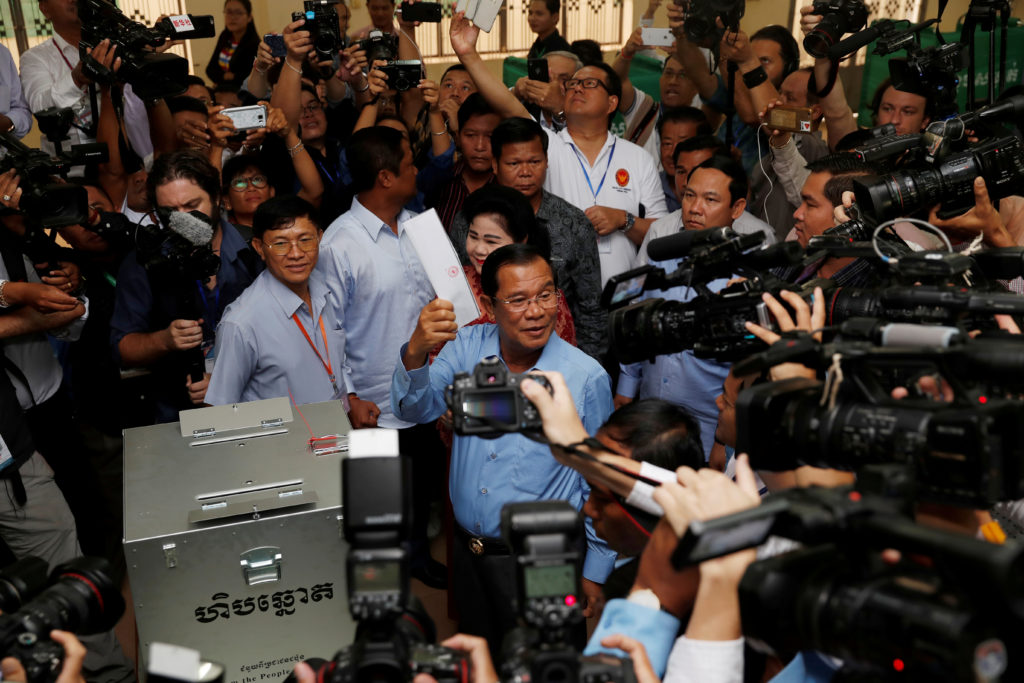 Cambodia’s Prime Minister and President of the Cambodian People’s Party (CPP) Hun Sen prepares to cast his vote at a polling station during a general election in Takhmao, Kandal province, Cambodia. Photo by Darren Whiteside/Reuters

Provisional but complete results issued Monday by the state National Election Committee showed Hun Sen’s party winning 4,875,189, or 76.8 percent, of a total 6,349,389 valid ballots cast. Under the election’s system of proportional representation, the party is almost certain to take more than 100 of the 125 seats in the National Assembly.

There were almost 600,000 spoiled ballots, generally interpreted to have been cast as protests by voters who wished to keep their identities secret.

The committee said it would announce full totals on Aug. 11, with the final official count to be released on Aug. 15, along with seat allocations in the assembly and the names of the new lawmakers.

The disbanded CNRP’s former leaders had urged people not to vote in what was dubbed a “clean finger” campaign because those who cast ballots had to dip a finger in indelible ink, a practice meant to thwart multiple voting.

But its campaign fizzled, if the official turnout tallies are accurate. According to the National Election Committee, more than 6.8 million registered voters, or 82.2 percent, cast ballots.

Criticism of the election as unfree and unfair came from Western governments and other groups.

The United States said it regretted the “flawed elections” and would consider its response, including expanding visa restrictions that were announced in December.

A statement from the White House press secretary’s office said the U.S. was disappointed in the government’s decision to disenfranchise voters, citing the exclusion of the principal opposition party, the jailing and banning of its officials, and threats to punish nonvoters.

Australian Foreign Minister Julie Bishop said in a statement that Hun Sen’s moves to eliminate his political opponents had reversed more than 25 years of progress toward democracy in Cambodia.

“Australia is concerned the election took place in an environment where not all political parties, civil society organizations and media could operate freely,” Bishop said. She added that Australia will continue to urge the Cambodian government to take steps to allow free and open political debate without violence and intimidation.

A veteran Indonesian politician and lawyer who has championed human rights said the Cambodian election was a “sign of danger” for the Association of Southeast Asian Nations that could set back democracy across the region.

He told a news conference held by the disbanded CNRP in Jakarta that “I think we’re looking at a possible domino effect of what is happening in Cambodia across ASEAN as a whole if this is not addressed.”