PALU, Indonesia — An earthquake-spawned tsunami swept away buildings and killed at least several hundred people on the central Indonesian island of Sulawesi, dumping victims across a devastated landscape that rescuers were struggling to reach Saturday, hindered by damaged roads and broken communications.

The nearby city of Donggala and the town of Mamuju were also ravaged by the magnitude 7.5 earthquake and tsunami but had not yet been reached by aid due to damaged roads and disrupted telecommunications.

Nugroho said “tens to hundreds” of people were taking part in a beach festival in Palu when the tsunami struck at dusk on Friday. Their fate was unknown.

“We got a report over the phone saying that there was a guy who climbed a tree up to 6 meters high,” Nugroho said. 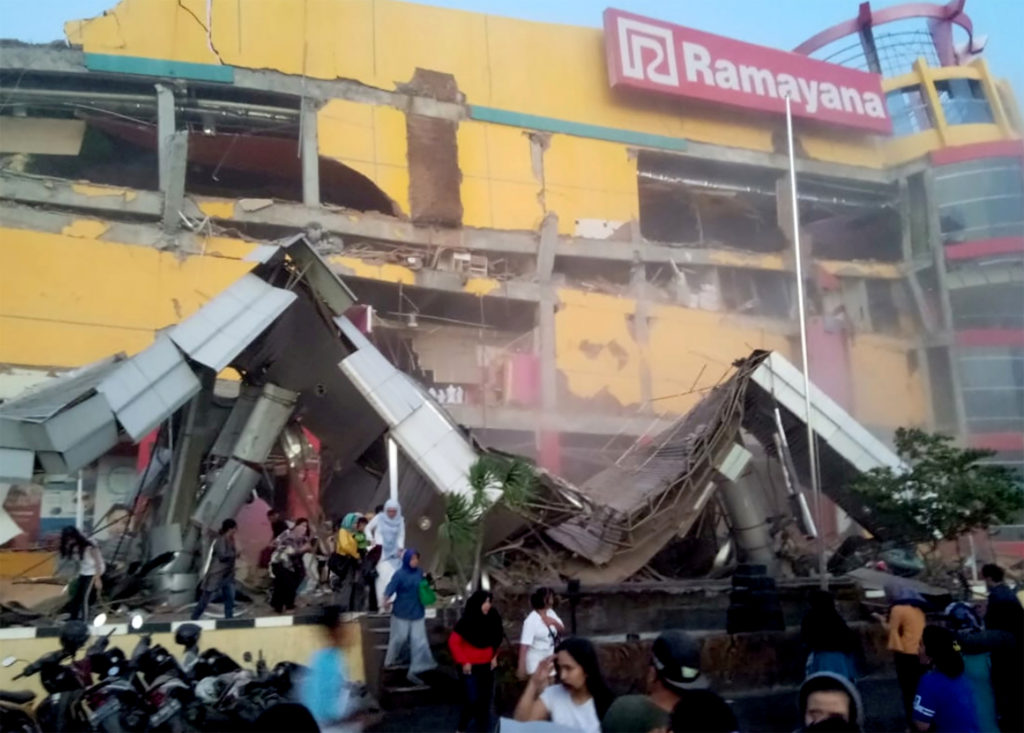 A shopping center heavily damaged following an earthquake in Palu, Central Sulawesi, Indonesia September 28, 2018 in this handout photo made available by Antara Foto. Photo by Antara Foto/BNBP/ via Reuters

Palu, which has more than 380,000 people, was strewn with debris from collapsed buildings. A mosque heavily damaged by the quake was half submerged and a shopping mall was reduced to a crumpled hulk. A large bridge with yellow arches had collapsed. Bodies lay partially covered by tarpaulins and a man carried a dead child through the wreckage.

The city is built around a narrow bay that apparently magnified the force of the tsunami waters as they raced into the tight inlet.

Indonesian TV showed dramatic smartphone video of a powerful wave hitting Palu, with people screaming and running in fear. The water smashed into buildings and the damaged mosque.

Hundreds of people were injured and hospitals, damaged by the quake, were overwhelmed.

“We hope there will be international satellites crossing over Indonesia that can capture images and provide them to us so we can use the images to prepare humanitarian aid,” Nugroho said. 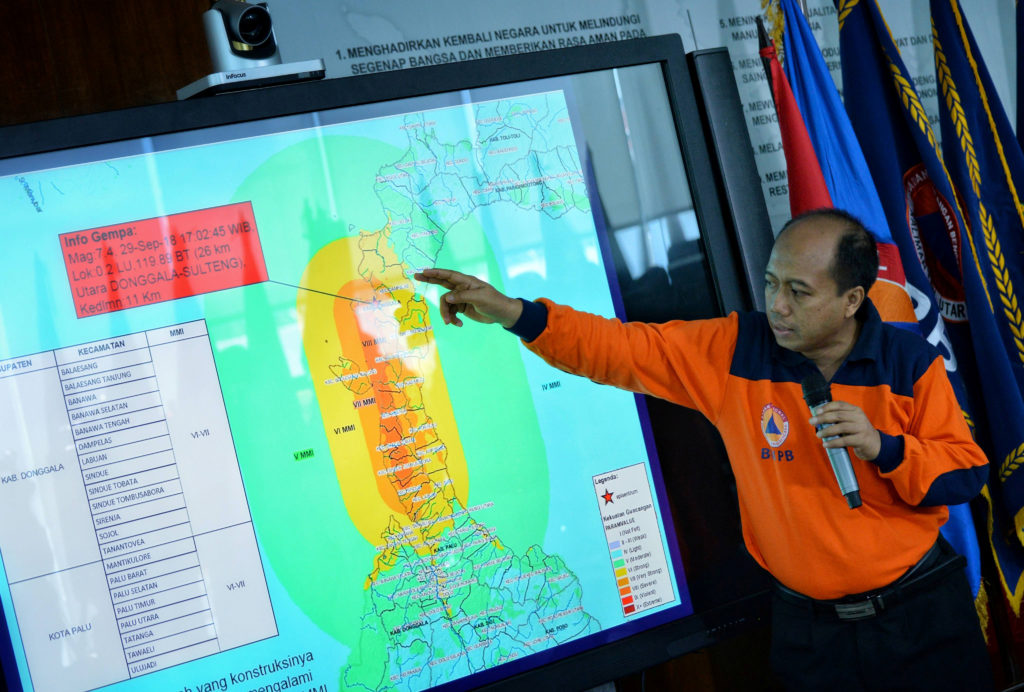 Sutopo Purwo Nugroho, a spokesman of IndonesiaÕs disaster mitigation agency BNPB, holds a news conference to brief on the latest situation after a strong quake and tsunami hit at Sulawesi island, at the BNPB headquarters in Jakarta, Indonesia, September 29, 2018. Photo by Antara Foto/Aprillio Akbar via Reuters

Indonesia is a vast archipelago of more than 17,000 islands that’s home to 260 million people. Roads and infrastructure are poor in many areas, making access difficult in the best of conditions.

The disaster agency has said that essential aircraft can land at Palu’s airport, though AirNav, which oversees aircraft navigation, said the runway was cracked and the control tower damaged.

AirNav said one of its air traffic controllers, aged 21, died in the quake after staying in the tower to ensure a flight he’d just cleared for departure got airborne safely. It did.

More than half of the 560 inmates in a Palu prison fled after its walls collapsed during the quake, said its warden, Adhi Yan Ricoh.

“It was very hard for the security guards to stop the inmates from running away as they were so panicked and had to save themselves too,” he told state news agency Antara.

Ricoh said there was no immediate plan to search for the inmates because the prison staff and police were consumed with the search and rescue effort.

“Don’t even think to find the inmates. We don’t even have time yet to report this incident to our superiors,” he said.

Indonesian President Joko “Jokowi” Widodo said Friday night that he instructed the security minister to coordinate the government’s response to the disaster.

Jokowi also told reporters in his hometown of Solo that he called on the country’s military chief to help with search and rescue efforts.

Sulawesi has a history of religious tensions between Muslims and Christians, with violent riots erupting in the town of Poso, not far from Palu, two decades ago.

Indonesia, the world’s most populous Muslim country, is frequently hit by earthquakes, volcanic eruptions and tsunamis because of its location on the “Ring of Fire,” an arc of volcanoes and fault lines in the Pacific Basin.

In December 2004, a massive magnitude 9.1 earthquake off Sumatra island in western Indonesia triggered a tsunami that killed 230,000 people in a dozen countries. On Aug. 5, a powerful quake on the Indonesian island of Lombok killed 505 people, most of whom died in collapsing buildings.

Left: The ruins of cars as seen after tsunami hit in Palu, Indonesia September 29, 2018. REUTERS/Stringer NO RESALES. NO ARCHIVES - RC1AAFC3A680