Palestinians bury dead after bloodiest day in Gaza since 2014

GAZA CITY, Gaza Strip — Thousands joined funeral processions Tuesday for some of the dozens of Palestinians killed by Israeli troops in a mass march on the Gaza border, as Israelis faced growing diplomatic fallout from the use of lethal force against unarmed protesters.

Monday marked the deadliest day in Gaza since a 2014 war there, and was part of a high-stakes campaign by Gaza’s Hamas rulers to break a decade-long border blockade.

Israeli forces killed 59 Palestinians, most by gunfire, and injured more than 2,700 on Monday, Gaza Health Ministry said. The ministry said that in addition, a 9-month-old girl died from tear gas exposure, but medical officials later cast doubt on that claim, saying the infant had a pre-existing medical condition. It remained unclear Tuesday where and how the child died.

In jarring contrast to the Gaza bloodshed, the U.S. held a festive inauguration ceremony for a new U.S. Embassy in contested Jerusalem at the same time Monday, just several dozen miles away. The juxtaposition of violence on the Gaza border and festivities attended by a high-powered Trump administration delegation — captured on split screens in TV broadcasts around the world — briefly drew attention to the plight of Gaza and its 2 million people. 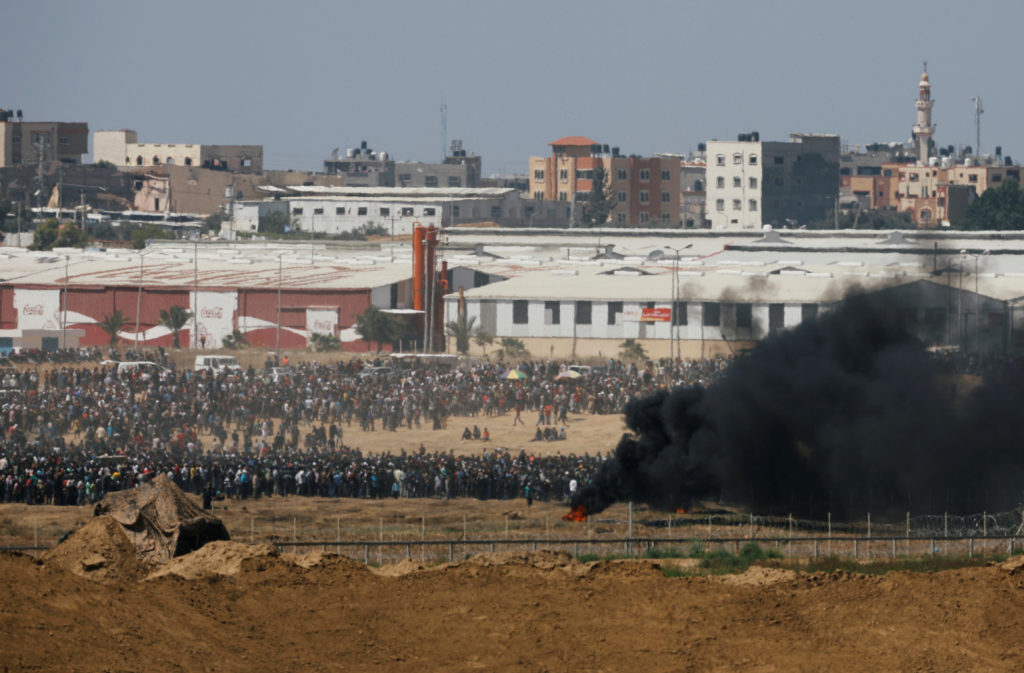 Smoke rises in front of Palestinians who protest against U.S. embassy move to Jerusalem and ahead of the 70th anniversary of Nakba, at the Israel-Gaza border. Photo by Amir Cohen/Reuters 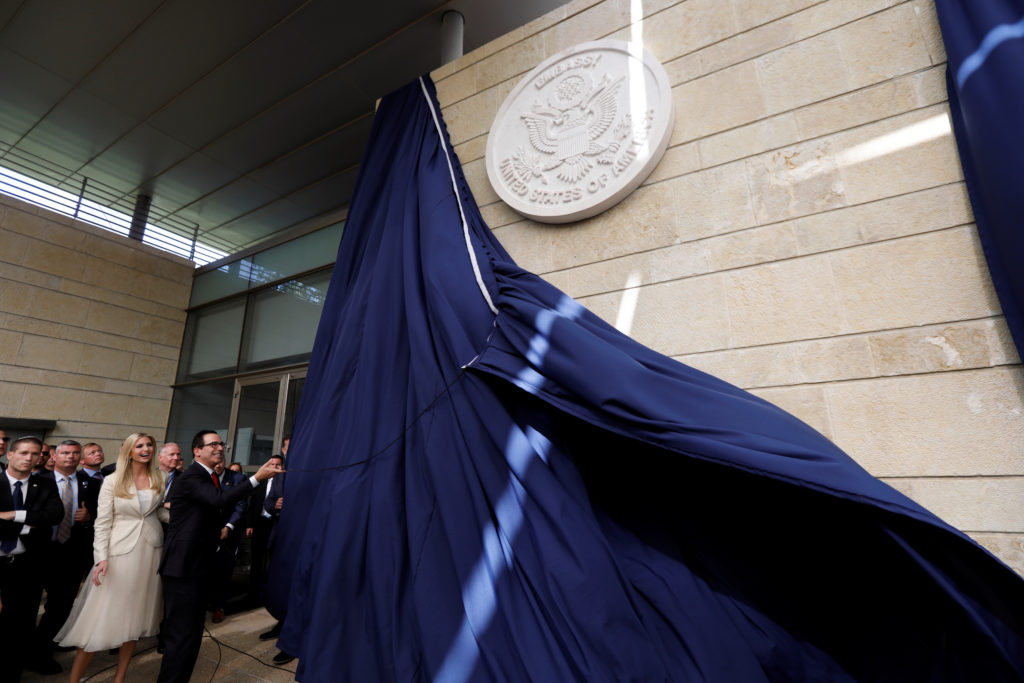 The opening of the embassy, condemned by Palestinians as blatantly pro-Israel, further dimmed prospects of what President Donald Trump had once touted as plans to negotiate the Mideast “deal of the century.”

Israel’s military says it is defending its border and has accused the Islamic militant Hamas of using protests as a cover for attacks on the border. The military has said rubber-coated steel pellets, at times used for non-lethal crowd control, are not effective in preventing Gaza demonstrators from approaching or breaching the border fence.

Ireland’s Foreign Ministry summoned the Israeli ambassador to express “shock and dismay” over the high casualty toll and said it would seek an independent international investigation. Turkey lowered flags to half-mast to mark three days of mourning for the Palestinians killed in Gaza, while China called on Israel to exercise constraint.

On Monday, South Africa recalled its ambassador to Israel until further notice.

The U.N. Security Council planned to meet Tuesday to discuss the violence, though it was not clear what might come out of the session.

Two U.N. diplomats said members couldn’t reach unanimous agreement on issuing a proposed statement, circulated by Kuwait, that would have expressed “outrage and sorrow” over the killings and sought an independent investigation. The diplomats spoke on condition of anonymity because the discussions were supposed to be private. 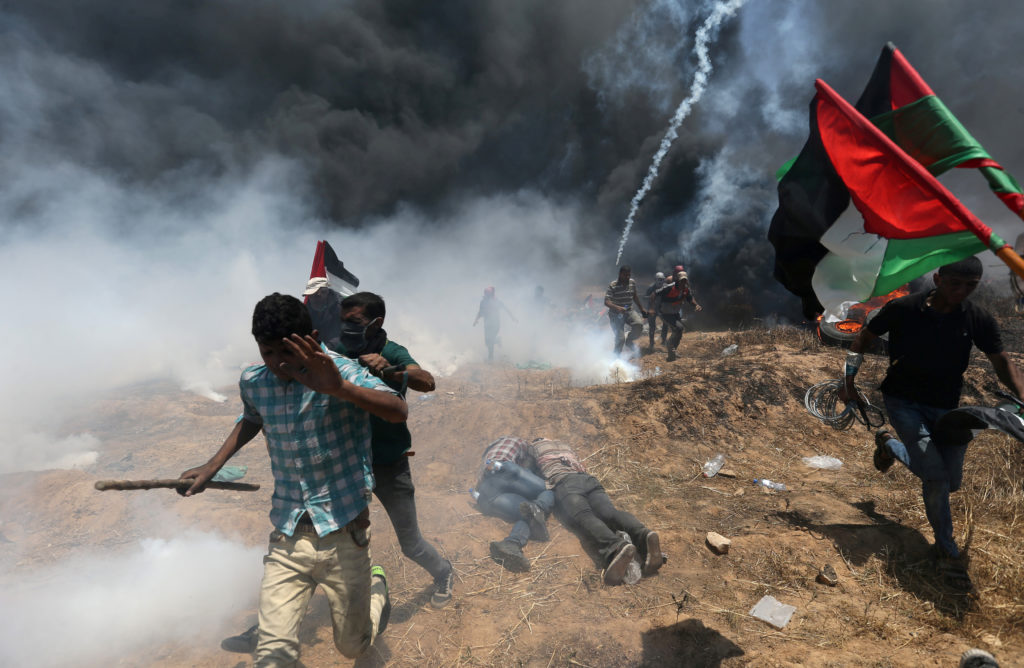 Palestinian demonstrators run for cover during a protest at the Israel-Gaza border in the southern Gaza Strip on May 14. Photo by Ibraheem Abu Mustafa/Reuters 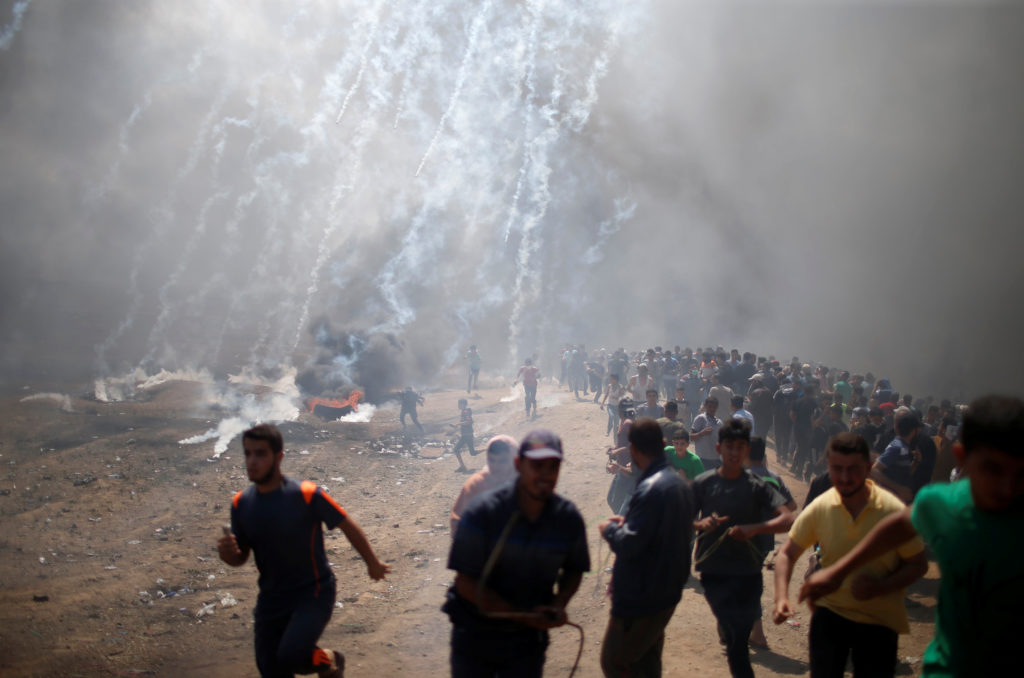 Palestinian demonstrators run from tear gas fired by Israeli troops during a protest against U.S. embassy move to Jerusalem and ahead of the 70th anniversary of Nakba, at the Israel-Gaza border east of Gaza City. Photo by Mohammed Salem/Reuters

For Hamas, which seized Gaza in 2007, Monday’s border protest was the culmination of a weeks-long campaign to try to break the blockade. The group led weekly protests near the border with Israel since late March as part of the push.

On Tuesday, there were no signs that Hamas had made a breakthrough in shaking off the blockade that was imposed by Israel and Egypt in 2007. In a sign of an easing, Egypt extended the opening of its border crossing with Gaza, initially set to continue for four days, by two more days, until Thursday. Typically, the Rafah crossing is closed for most of the year.

In recent days, there had been negotiations between Egypt and Hamas, presumably on easing the blockade in exchange for ending the protests.

Hamas has said protests would continue in a weekly format, but it was not clear if it would be able to maintain momentum during the fasting month of Ramadan, which begins this week.

Protest organizers said Tuesday was set aside for funerals, in an apparent attempt to lower expectation of another mass protest later in the day. Thousands joined funeral processions Tuesday, though many of those killed Monday had been buried the same day, in line with Muslim traditions of speedy burials.

Hamas had initially said mass border protests would continue Tuesday, which marks the 70th anniversary of what Palestinians call their “nakba,” or catastrophe — the uprooting of hundreds of thousands in the Mideast war over Israel’s 1948 creation. In the West Bank, sirens sounded for 70 seconds Tuesday to mark the “nakba.”

The border marches are seen as Hamas’ last hope of ending the blockade that has made it increasingly difficult for the group to govern. Other tactics, including three cross-border wars with Israel in a decade and reconciliation with Hamas’ chief Palestinian rival, West Bank-based President Mahmoud Abbas, have failed.

Monday emerged as the deadliest single day in Gaza since the last Israel-Hamas war in 2014. The Gaza Health Ministry said 59 Palestinians were killed by Israeli fire, including eight minors.

The Health Ministry also said a 9-month-old infant, Layla Ghandour, had died of tear gas exposure. However, a medical official cast doubt on the report, saying the infant had a serious pre-existing medical condition.

The baby’s family said Tuesday that Layla had been taken to the area of the protests by relatives in a mix-up and that she was with her grandmother near the border fence when tear gas fell.

The rights group Al Mezan said it is investigating the circumstances of the death.

In addition, more than 2,700 people were hurt, among them 1,360 by gunshots. Of the wounded, 130 were in serious or critical condition, it said.

The new wave of injured placed a new burden on Gaza’s already struggling hospitals where key medicines and surgical supplies were lacking even before the latest bloodshed, in part because of the border closures.

Hospitals and other key installations in Gaza, such as sewage treatment and water pumping stations, heavily rely on generators because of hours-long power cuts every day. Gaza’s power crisis was further aggravated last week when Palestinian vandals destroyed the fuel terminal at Israel’s only cargo crossing into Gaza, halting the flow of fuel and gas.

Israel has defended its actions over the past few weeks, saying Hamas is trying to carry out attacks under the cover of protests. The Israeli military said its aircraft had struck 11 “terror targets” in a Hamas military compound Monday and that tanks targeted two Hamas posts. It said Gaza activists used 10 explosive devices and firebombs against troops and that shots were fired at soldiers positioned along the border.

Monday’s protest also targeted the opening of the U.S. Embassy in Jerusalem, viewed as a major provocation by the Palestinians and the Arab world.

The Palestinian political camp led by Abbas seeks Israeli-annexed east Jerusalem as the capital of a future Palestinian state.

Left: A relative of a Palestinian, who was killed during a protest at the Israel-Gaza border, mourns during his funeral in Khan Younis in the southern Gaza Strip. Photo by Ibraheem Abu Mustafa/Reuters