Pence said there would be no letup in President Donald Trump’s policy of combating China’s mercantilist trade policy and intellectual property theft that has erupted into a tit-for-tat tariff war between the two world powers this year.

The U.S. has imposed additional tariffs on $250 billion of Chinese goods and China has retaliated. Pence reiterated Trump administration threats to more than double the penalties.

“The United States, though, will not change course until China changes its ways,” Pence said, accusing Beijing of intellectual property theft, unprecedented subsidies for state businesses and “tremendous” barriers to foreign companies entering its giant market.

Pence announced the U.S. would be involved in ally Australia’s plan to develop a naval base in Papua New Guinea, where the summit is being held. China has been intensely wooing Papua New Guinea and other Pacific island nations with aid and loans for infrastructure.

“Our vision for a free and open Indo-Pacific will prevail,” Pence said. 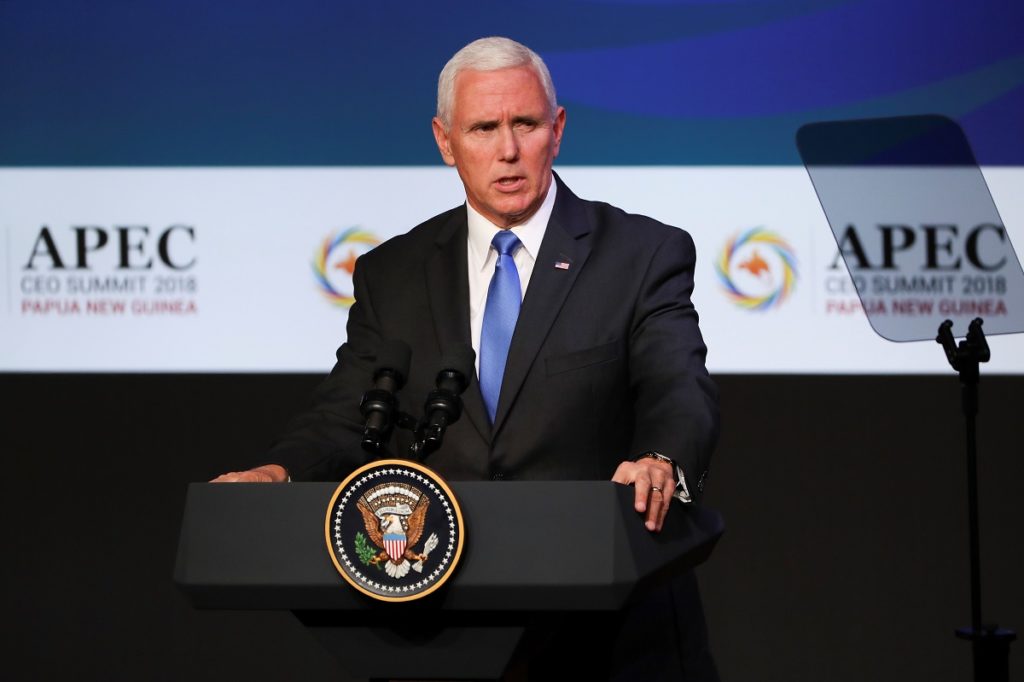 The vice president harshly criticized China’s global infrastructure drive, known as the “Belt and Road Initiative,” calling many of the projects low quality that also saddle developing countries with loans they can’t afford.

The U.S., a democracy, is a better partner than authoritarian China, he said.

“Know that the United States offers a better option. We don’t drown our partners in a sea of debt, we don’t coerce, compromise your independence,” Pence said. “We do not offer constricting belt or a one-way road. When you partner with us, we partner with you and we all prosper.”

Xi, who spoke before Pence, anticipated many of the U.S. criticisms in his speech. He said countries are facing a choice of cooperation or confrontation as protectionism and unilateralism spreads. 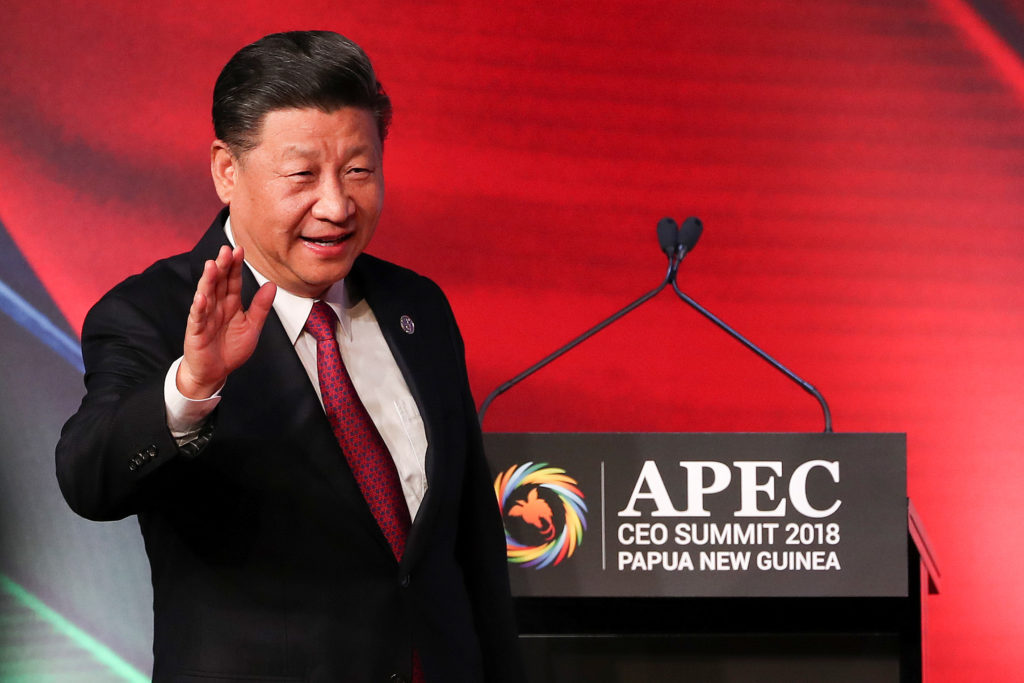 Xi expressed support for the global free trading system that has underpinned his country’s rise over the past quarter century to the world’s second-biggest economy after the U.S.

“The rules made should not be followed or bent as one sees fit and they should not be applied with double standards for selfish agendas,” Xi said.

“Mankind has once again reached a crossroads,” he said. “Which direction should we choose? Cooperation or confrontation? Openness or closing doors. Win-win progress or a zero sum game?”

Responding to a chorus of criticism of China’s international infrastructure drive, Xi said it was not a trap or power grab.

“It is not designed to serve any hidden geopolitical agenda, it is not targeted against anyone and it does not exclude anyone,” Xi said. “It is not an exclusive club that is closed to non-members, nor is it a trap as some people have labeled it.”

Leaders of 21 Pacific Rim countries and territories that make up 60 percent of the world economy are meeting in Port Moresby, the capital of Papua New Guinea, for an annual Asia-Pacific Economic Cooperation summit.

They are struggling to reach agreement on a joint declaration, particularly whether to push for changes to the World Trade Organization, which sets the rules for trade and can penalize nations that breach them.

WTO member nations have been unable to reach agreement on further freeing up trade for years and the organization is in danger of atrophy. 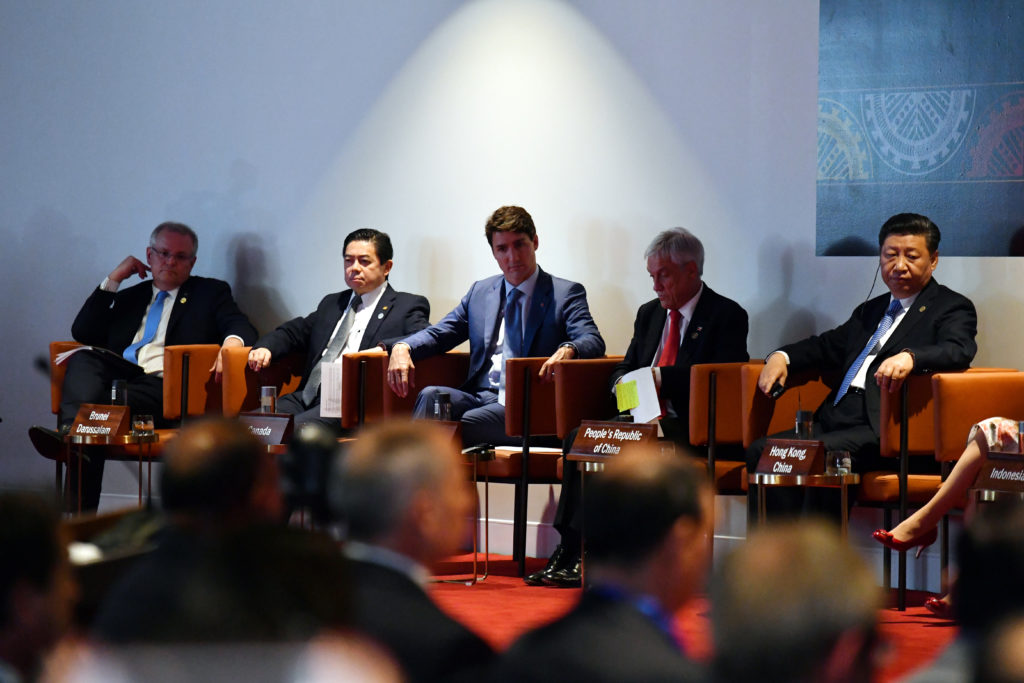 Two thirds of its members claim developing nation status that allows them to take advantage of benefits and exemptions to obligations not granted to advanced economies, according to the Center for Strategic and International Studies. The U.S., meanwhile, believes the WTO’s arbitration body has made decisions beyond its mandate.

APEC is also facing questions about its future. Malaysia’s 93-year-old Prime Minister Mahathir Mohamad said it will become irrelevant if developing nations continue to be left behind by globalization and free trade.

China’s territorial claims to most of the South China Sea that borders Southeast Asian nations were also a target in Pence’s speech.

China has demanded the U.S. stop deploying ships and military aircraft close to its man-made islands in the disputed waters after American and Chinese ships nearly collided near a contested reef in September. But Pence stressed Saturday that the U.S. won’t back off.

“We will continue to fly and sail wherever international law allows and our national interest demands,” he said. “Harassment will only strengthen our resolve. We will not change course.”

Washington will continue to support efforts by Southeast Asian nations to negotiate a legally binding “code of conduct” with China “that respects the rights of all nations, including the freedom of navigation in the South China Sea,” Pence said.