LIMA, Peru — Embattled President Pedro Pablo Kuczynski has offered his resignation to Peru’s congress ahead of a scheduled vote on whether to impeach the former Wall Street investor on corruption charges, according to a presidential aide.

Kuczynski announced his decision in a televised address to the nation.

If congress accepts the resignation, power would transfer to Vice President Martin Vizcarra, who is serving as Peru’s ambassador to Canada.

Pressure has been building on Kuczynski to resign after the shock revelation Tuesday of secretly-shot videos in which several of the president’s allies were caught allegedly trying to buy the support of a lawmaker to block the conservative leader’s impeachment.

The videos deepened a bitter political crisis playing out just three weeks before U.S. President Donald Trump is scheduled to visit Peru for a regional summit.

The videos presented by the main opposition party purportedly show attempts by Kuczynski’s lawyer, a government official, and the son of former strongman Alberto Fujimori, trying to convince the lawmaker to back the president in exchange for a hand in state contracts in his district.

A new impeachment vote is scheduled to take place Thursday and Kuczynski had once again been scrambling for support — a task made harder by the release of the videos, which fueled calls from some of Kuczynski’s allies and members of his cabinet for the president to immediately resign.

“What we’ve seen in the videos is embarrassing,” Congressman Salvador Heresi, one of a handful belonging to Kuczynski’s party, said on Twitter, threatening to join the opposition and vote for impeachment if Kuczynski didn’t resign. 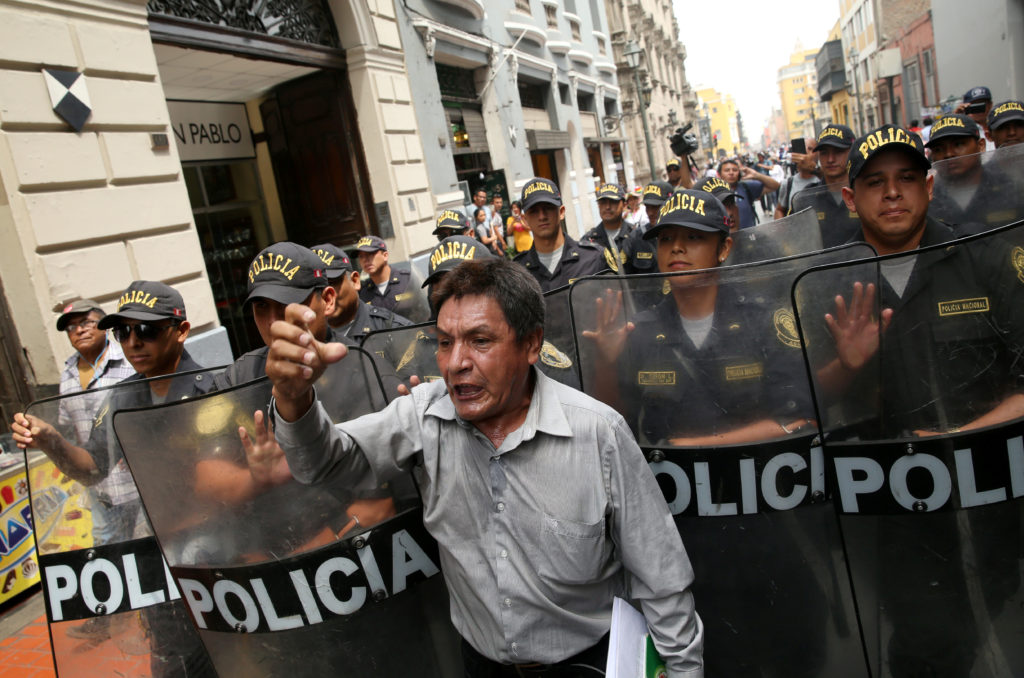 Keiko Fujimori, who has publicly distanced herself from her father, accused Kuczynski of orchestrating the alleged vote-buying scheme. On Twitter she regretted her younger brother’s appearance in one of the videos, which she said harkened back to “practices that have caused so much damage to Peru and our family.”

She was alluding to her father’s longtime spy chief, Vladimiro Montesinos, who was known to secretly record himself paying cash bribes to media moguls, military officers and politicians in efforts to gain leverage over potential rivals and boost his almost unlimited power.

The videos released Tuesday portray the president’s allies trying to lure lawmaker Moises Mamani to their side with promises of lucrative contracts.

In one exchange, Freddy Aragon, the head of the government agency regulating firearms, tells Mamani that he stands to pocket 5 percent of future public works projects authorized by the executive branch in his district. In another, Kuczynski’s lawyer hands the waffling lawmaker the transportation minister’s cell phone.

“Those who’ve voted in favor of impeachment have all the doors closed to them,” Kenji Fujimori tells Mamani in one of the recordings.

Following the release of the videos, the government fired Aragon, dismissing his apparent misconduct as that of a low-ranking official.

“The government doesn’t buy people in Congress. That’s impossible,” said Prime Minister Mercedes Araoz, adding that Kuczynski’s removal would be a humiliating blow for Peru’s international reputation as it prepares to host Trump and regional leaders for the Summit of the Americas. “It’s true that everyone knocks on our door, they call and they even send us messages about their pet projects. But that’s a common practice because they are representing their districts.”

Kenji Fujimori said the tapes had been heavily edited to obscure the truth, and lashed out at his sister for “acting like a delinquent” in allegedly ordering the recording of his private conversations.

Amid all of the political intrigue, Peru’s chief prosecutor said he would open a criminal probe into the videos.

Kuczynski is accused of lying as president about $782,000 in payments his consulting firm received a decade earlier from Brazilian construction giant Odebrecht.

Odebrecht is at the center of Latin America’s biggest graft scandal, having admitted to paying some $800 million in bribes to officials across Latin America, including $29 million to politicians in Peru.

The release of the videos came the same day as Kenji Fujimori announced he will start a new political party to compete in 2021 presidential elections.

Even the party’s name, Change 21, seemed destined to deepen the siblings’ split, harkening back to the elder Fujimori’s Change 90 campaign that in 1990 ushered the then-outsider into Peru’s top office.