Photo essay: The burn pits of Iraq and Afghanistan

During most of the wars in Iraq and Afghanistan, the military and its contractors disposed of garbage and everything else it did not want to ship back to the U.S. in open-air burn pits.

There were at least 230 burn pits in Iraq and Afghanistan according data from the Government Accountability Office and the Department of Defense. Beginning in 2008, veterans across the United States began suing former Haliburton subsidiary KBR Inc., the company that the Defense Department contracted to provide logistics support. Some veterans allege that the smoke from the burn pits was toxic and made them sick. KBR — which ran many of the burn pits — claims that military commanders told them to operate the burn pits, and that burning the garbage was the most secure and least negative option for disposing of waste. These photographs were taken by soldiers and contractors who were exposed to burn pit smoke in in Iraq and Afghanistan. 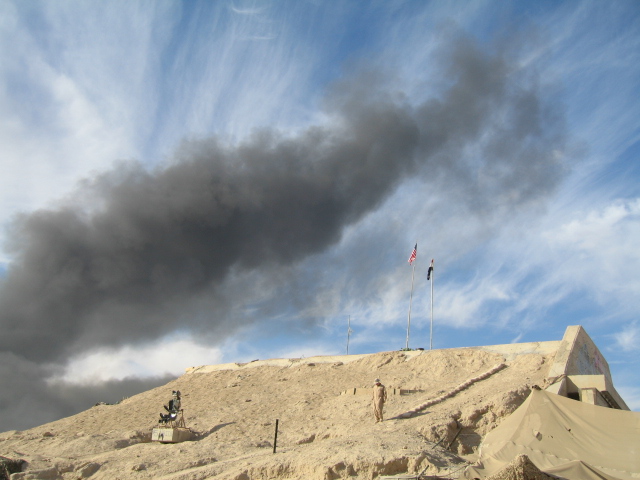 “Burn pit smoke would encircle the entire military base in an enormous dark ring that settled to the ground after darkfall,” Elizabeth Hilpert told the PBS NewsHour. Hilpert worked for the defense contractor LSI, which maintained vehicles and air conditioning systems at military bases in Iraq. She was stationed at Al Taqaddum in Iraq from 2006 to 2007. “A lot of people got rare cancers and died.” 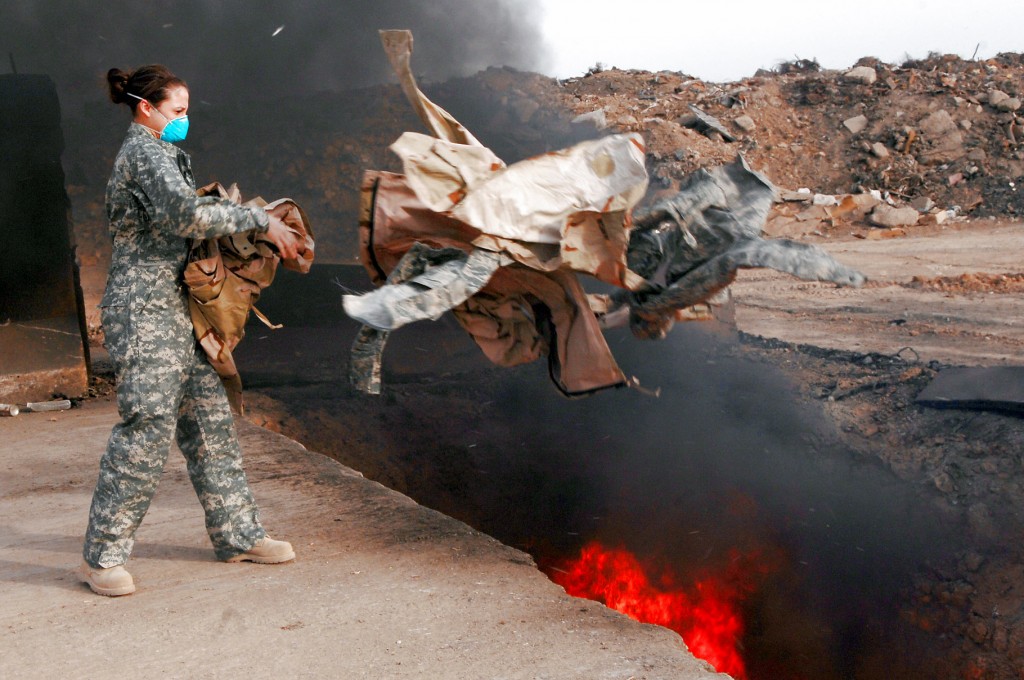 Senior Airman Frances Gavalis tosses unserviceable uniform items into a burn pit March 10 at Balad Air Base, Iraq. Military uniform items must be burned to ensure they cannot be used by opposing forces, according to the U.S. military. Photo by U.S. Air Force/Senior Airman Julianne Showalter 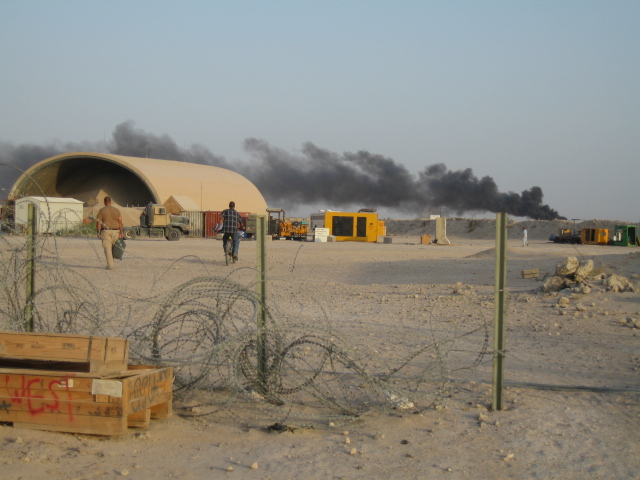 The dumps had “mounds of discarded and trashed equipment, much of it thrown away perfectly working, but usually thrown out when military units left … Discarded equipment sprawled out as far as the eye could see,” said Hilpert.

At the dump, “we had to climb over and sort through mountains of military discarded equipment and disassemble for needed repair parts, since we frequently did not have necessary repair parts in [the] supply chain. We thusly had to go on these repair parts runs once or twice nearly every week … Any exposed skin and mucous membranes, as experienced by many of us, felt on fire, and burning. Many of us developed shortness of breath,” said Hilpert. 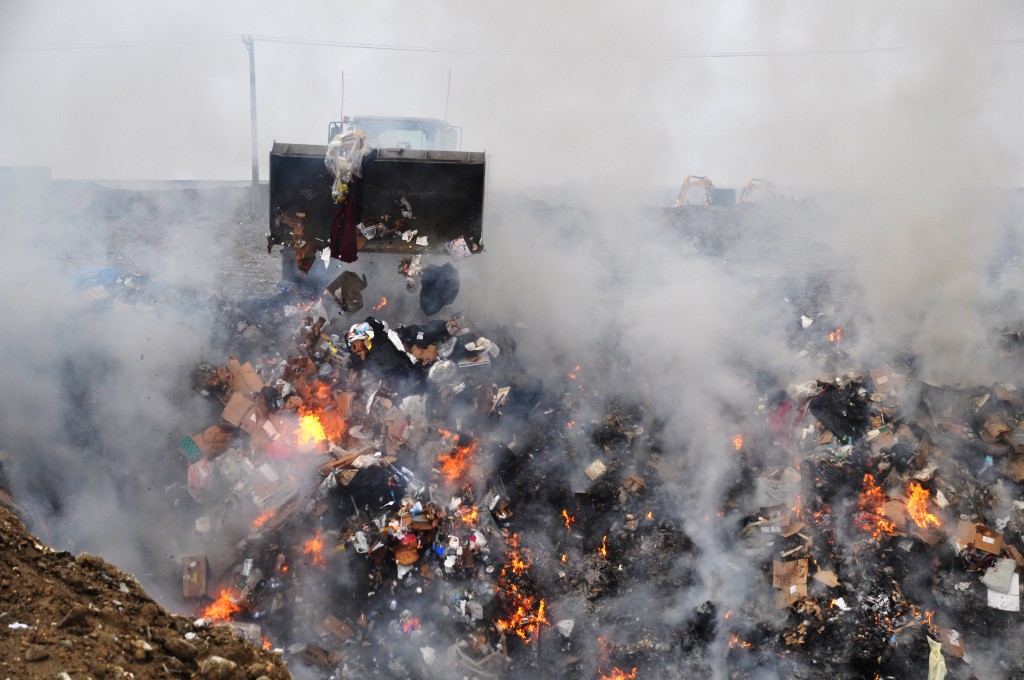 Photo by Department of Defense. 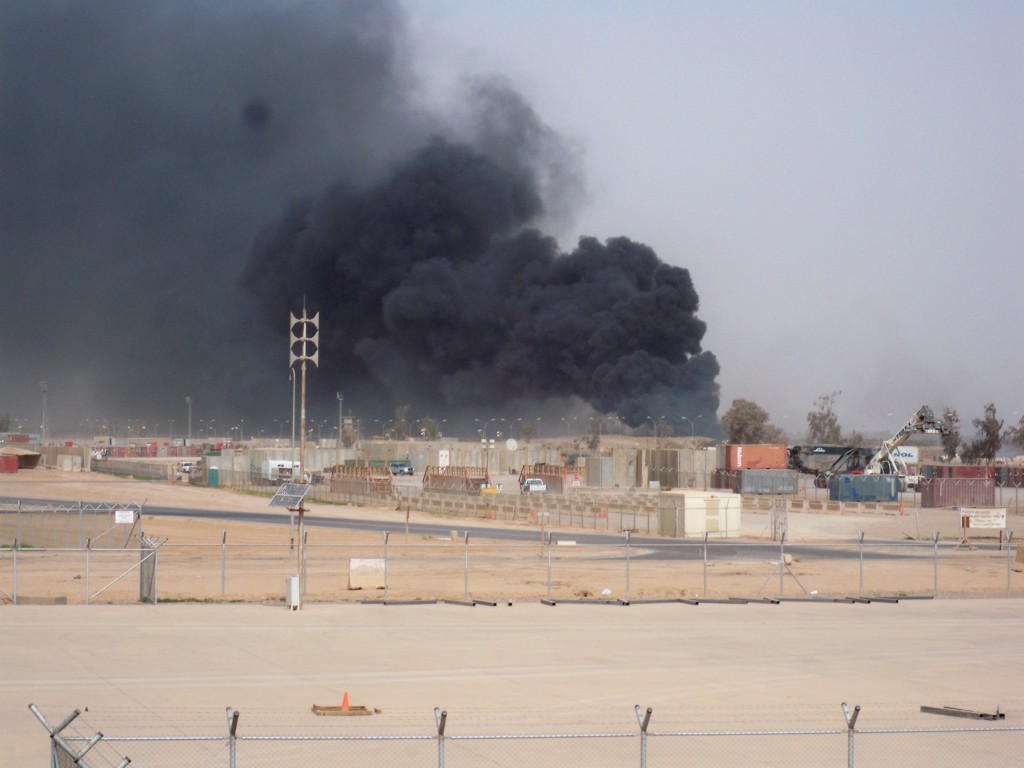 Joint Base Balad, January and May of 2009. Photo by Greg Roberts 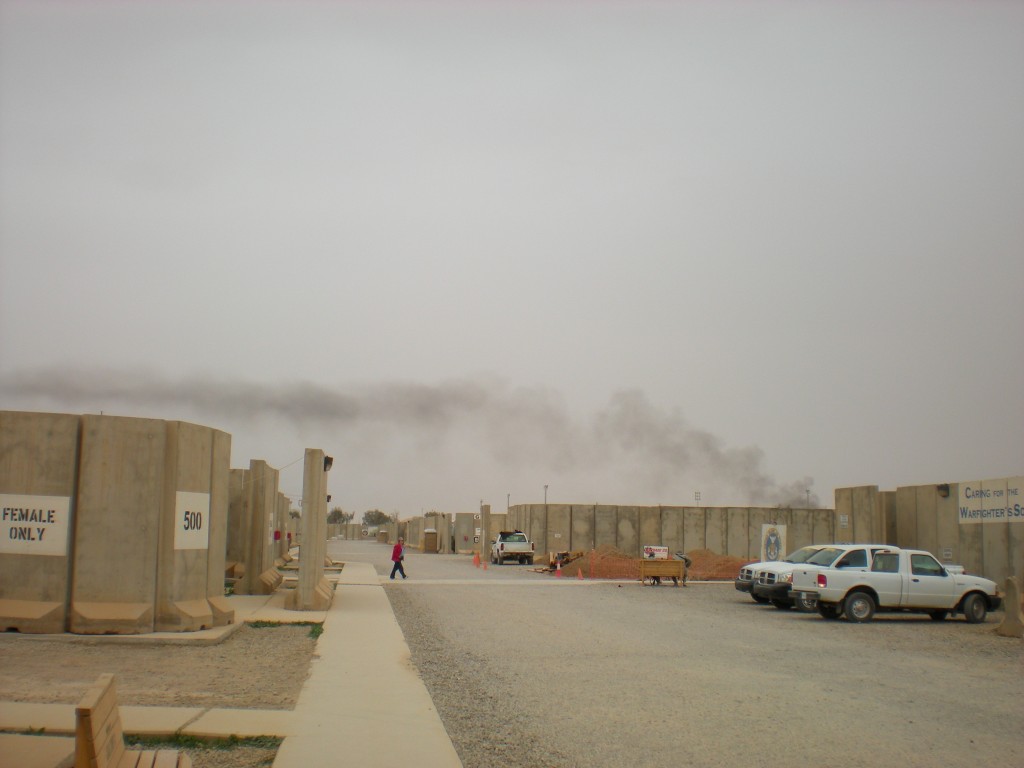 Joint Base Balad, January and May of 2009. Photo by Greg Roberts

“I have had two friends who I served with in Iraq who have died since, due to pancreatic and colon cancer. They were both in their late thirties. I have irritable bowel syndrome, and have had pneumonia three times in the past 5 years. Something over there made us sick,” said Roberts. 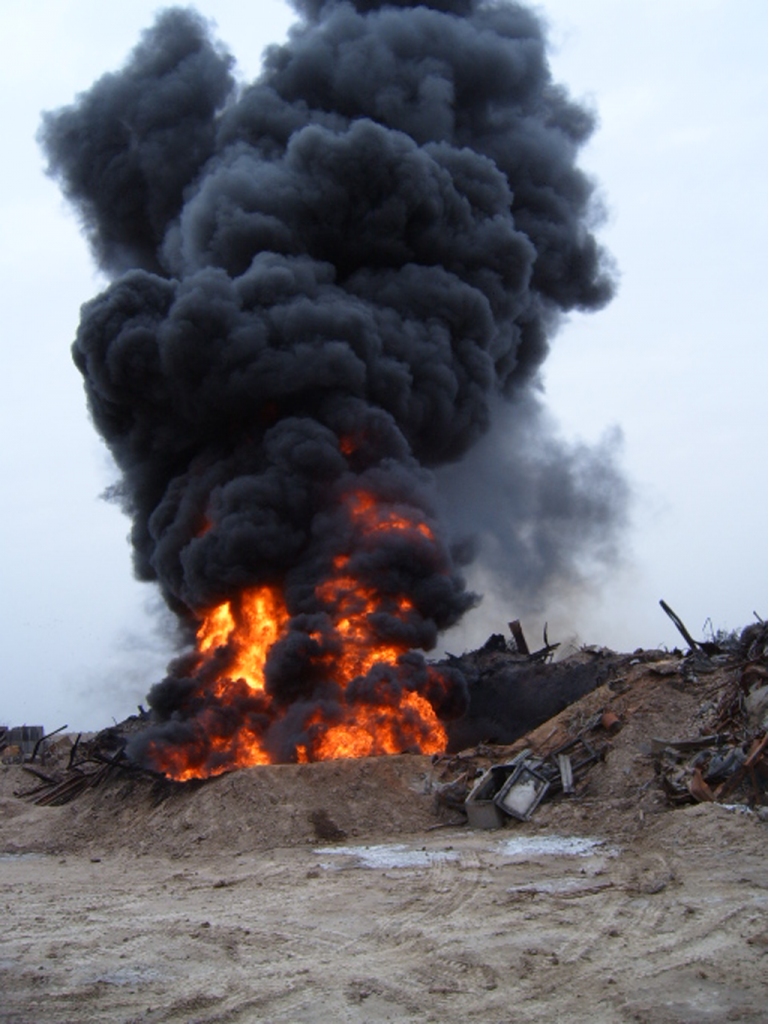 “There were contractors running the dining facility with third-world nationals working it, but we brought Iraqi nationals to come in to take care of the dump while we, the U.S. Army, babysat them. I have degenerative discs in my neck and lower back, hip, sciatica issues often, shoulder issues, headaches, a slight cough sometimes, even though I never smoked in my life. I am not sure about my fellow comrades [and] about their issues, some I think it affected more than others … I believe I did some testing for my lungs and that stuff, but nothing came about from it,” said Sgt. Gregory Blahnik, a mechanic in the Army National Guard. 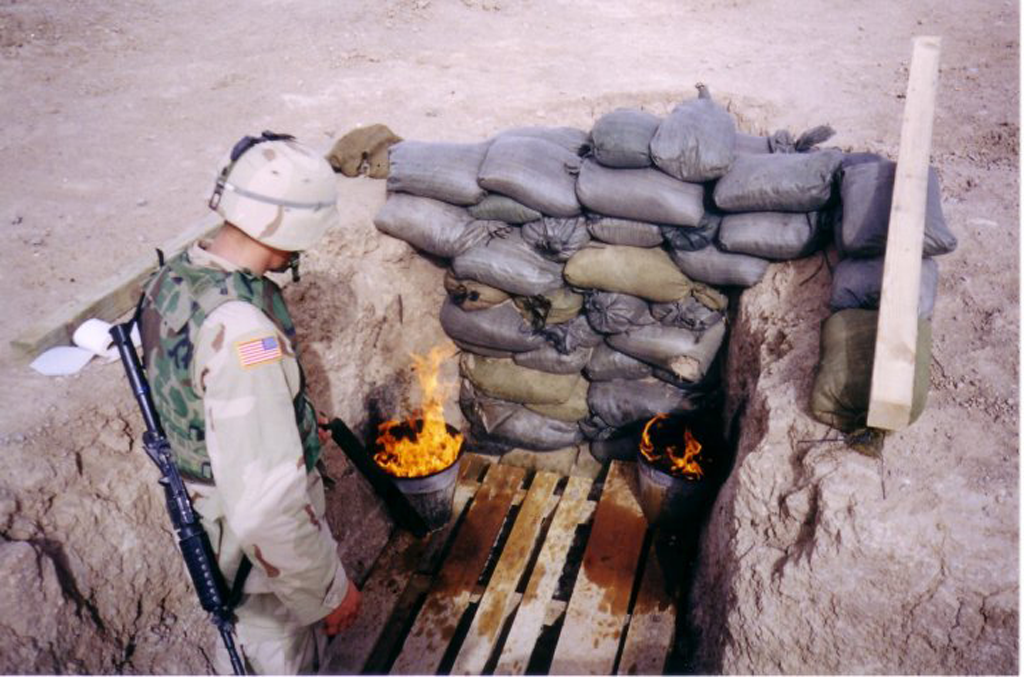 “We were instructed to use a mixture of kerosene and jp 8 jet fuel to burn the feces,” wrote retired Infantry Sgt. Timothy Aponte. 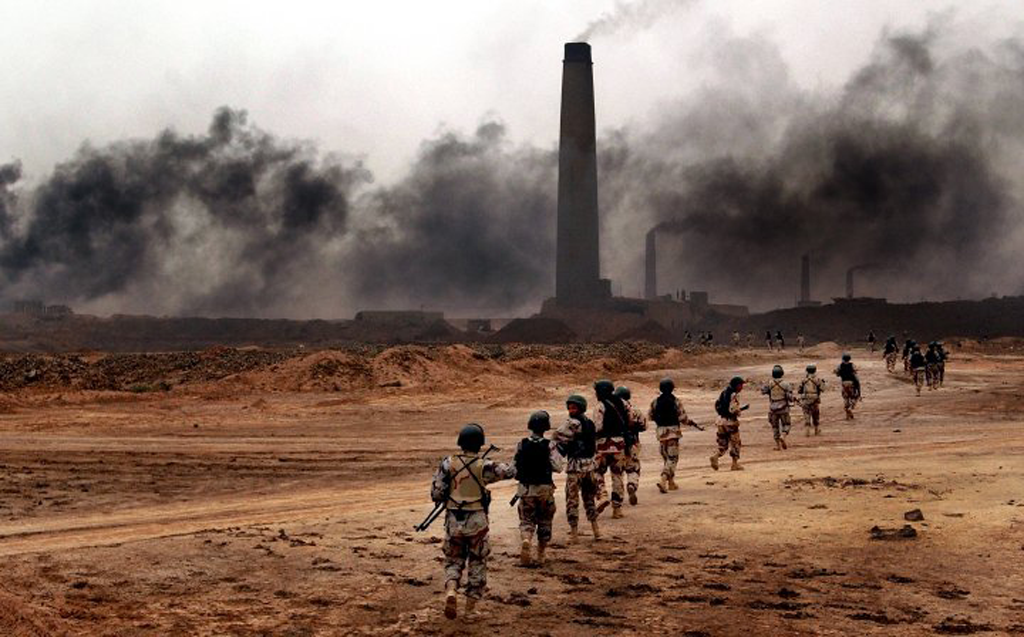 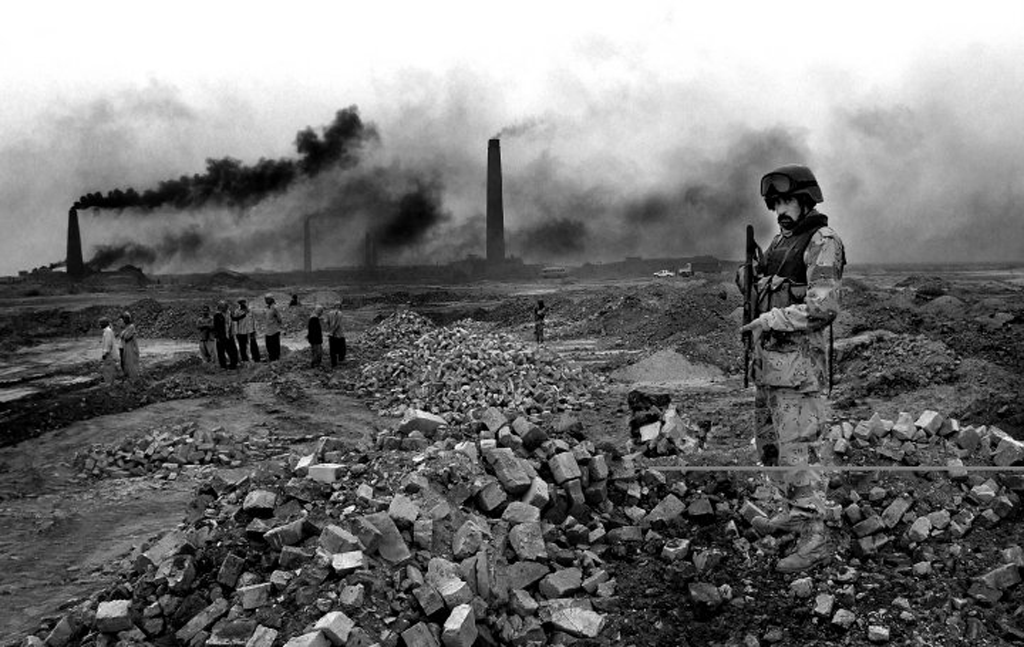 This picture of a brick factory, which emitted a lot of smoke, was taken near Camp Caldwell or Forward Operating Base Caldwell in northeast Iraq, 12 miles from the Iranian border in the Diala Province in Karkush, according to Staff Sgt. William Spencer, who was a recovery technician while serving in Iraq. “The pollution from the brick factories [has] made a lot of soldiers have breathing issues,” said Spencer. 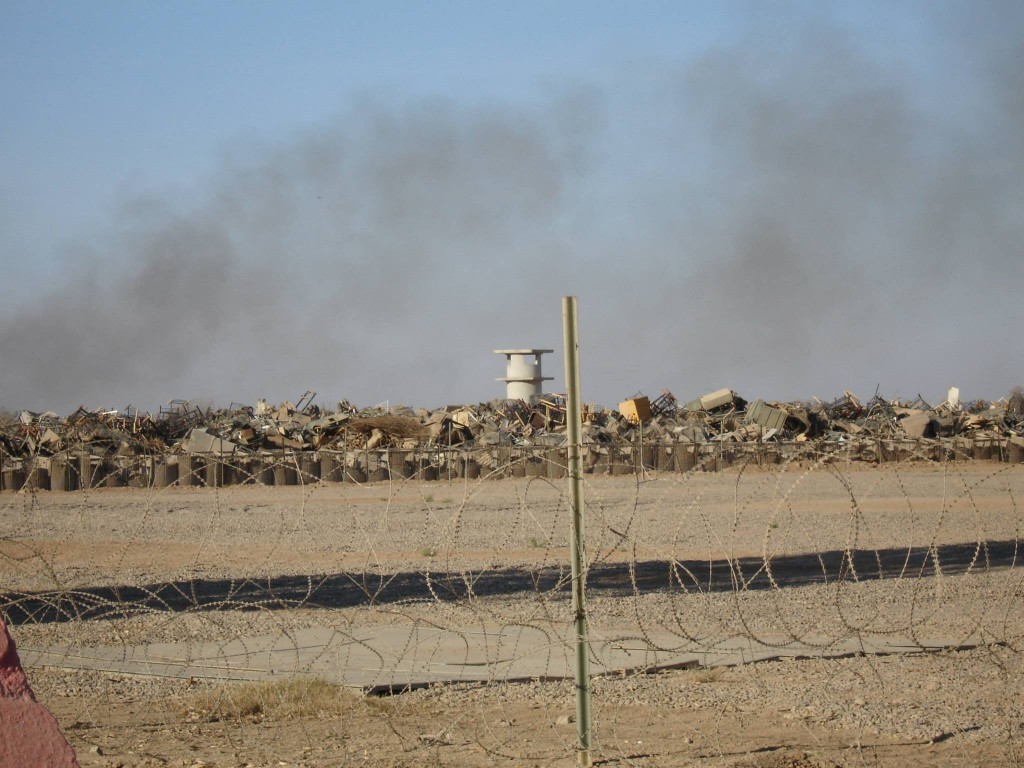 The burn pit at Camp Anaconda was about a mile north of the buildings where Joel Heath and his teammates spent most of his 12-hour workdays. Heath, a Defense Department civil servant, served in Iraq as an ammunition quality-assurance specialist. “Through the winter, after sunset, there were often inversion conditions so the smoke would hang so heavy in the air that it looked like dense fog,” Heath said. “When most people walked out of one of those buildings on those evenings, they would cough and choke.”

“What the government currently is not recognizing is that there were many thousands of civilian employees working on the same installations as service members and breathing the same air that was badly polluted,” said Joel Heath. Personnel at Camp Anaconda were exposed not only to burn pit smoke, but also diesel fumes and aerosolized jet fuel, as well as minerals that filled the air in sandstorms that kicked up every couple of weeks, he said. 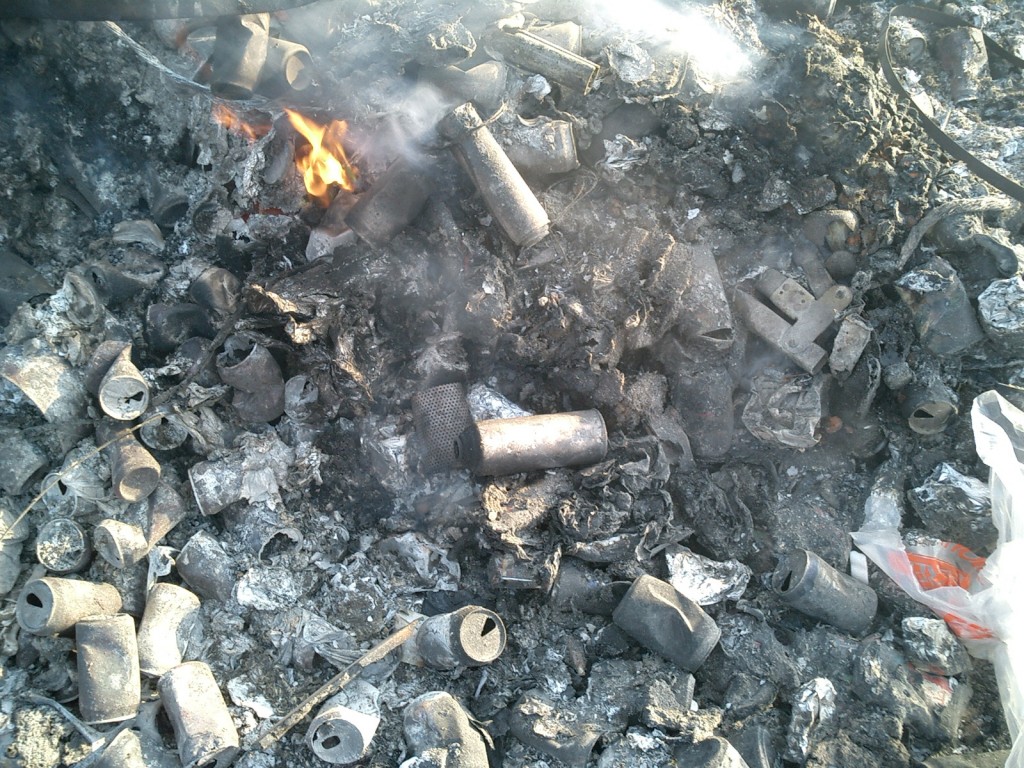 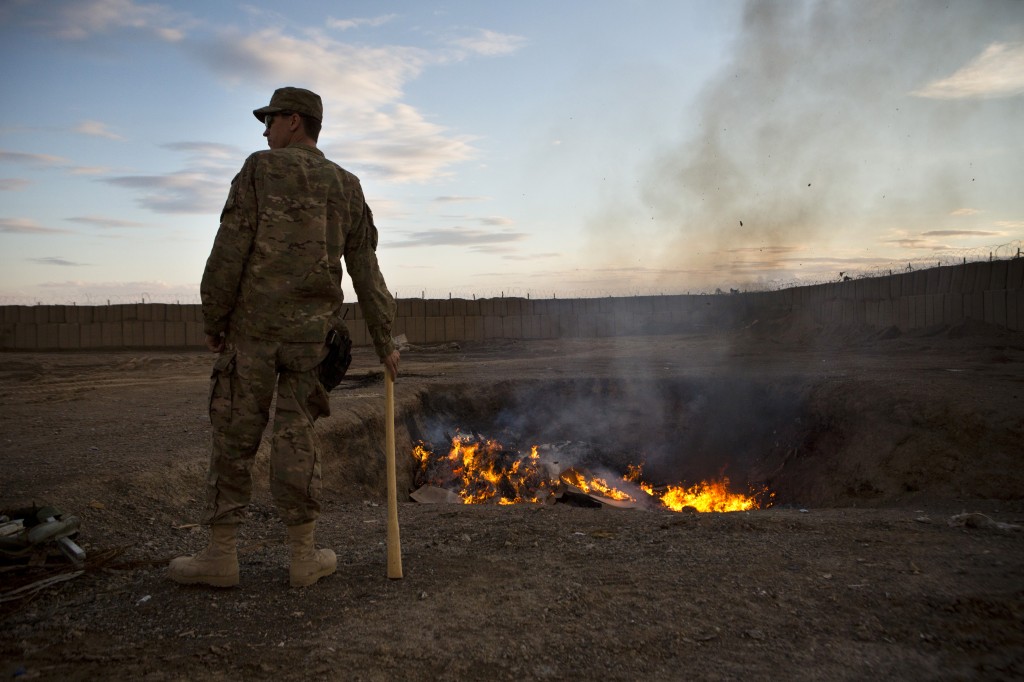 Do you have photos of burn pits in Afghanistan or Iraq? If so, send them to us at newshourburnpits@gmail.com. Make sure you tell us when and where it was taken and anything else you want us to know about the photo. By sharing your photos, you grant us the right to use them online or display on air.