Photographer John Moore is no stranger to combat. As a member of an Associated Press team in 2005, he shared a Pulitzer Prize for breaking news photography for coverage of the war in Iraq and he’s done extended stints in Afghanistan, Pakistan, Somalia, South Africa, Mexico and Nicaragua and elsewhere in the last 20 years.

Moore, who now works for Getty Images, also won a host of international awards in 2008 for his exclusive photos of the assassination of former Pakistani Prime Minister Benazir Bhutto.

Yet despite his relative comfort with being on the frontlines, Moore told the NewsHour from his hotel room in Cairo that his latest assignment -a six-week trip that took him to the uprisings in Egypt, Bahrain and Libya – might have been his most dangerous.
Moore recorded the interview for us after sneaking out of Benghazi, Libya en route back to his home in Denver. 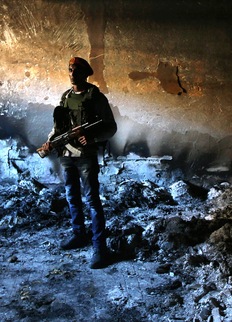 “I’ve covered a lot of conflict over the years,” More said, “but I’d say my days of combat coverage here in Libya were the most heavy of all.

“The battle scenes were absolutely epic.”

Moore said that he had been traveling with New York Times photographers Tyler Hicks and Lynsey Addario for two of the three weeks he was in Libya.

“For safety I traveled with other journalists,” Moore said. “And we’d convoy each day to the frontlines.”

The New York Times announced Wednesday that Hicks and Addario, along with their Beirut Bureau Chief Anthony Shadid and videographer Stephen Farrell, had gone missing while reporting from the eastern city of Ajdabiya.

Libya has become an increasingly dangerous place for reporters to work, as some rebel strongholds have recently fallen to forces loyal to Col. Moammar Gadhafi.

The BBC reported that three of its journalists had been detained and beaten with rifles by Gadhafi’s security forces last week. Also, a cameraman for Al Jazeera was recently killed near Benghazi.

Moore, who left Libya earlier this week without incident, said that he was nervously waiting to hear word on his colleagues’ whereabouts.

Editor’s note: The New York Times said Friday that the journalists, who are being held by the Libyan government, were expected to be released.