Photos: As roles for female UN peacekeepers grow, so do the dangers

Editor’s Note: This year, the United Nations celebrates the 70th anniversary of its peacekeeping missions around the world. Over the years, about 1 million men and women have served in more than 70 peacekeeping operations since the first deployment of peacekeepers to the Middle East in May 1948. In the early days, troops and police came from a relatively small number of countries and they were almost exclusively men.

Now, more than 100,000 military, police and civilian personnel from 125 countries serve in 14 peacekeeping operations. Sebastian Rich visited one of those missions — the United Nations Interim Force in Lebanon, or UNIFIL — to learn about women in the military and their particular challenges. He recounts it below:

U.N. peacekeepers have long been the only chance for some semblance of peace for the world’s most vulnerable people. Sadly, for some “blue hats” — named for their sky blue helmets — these missions are now all too frequently harsh and increasingly very dangerous. 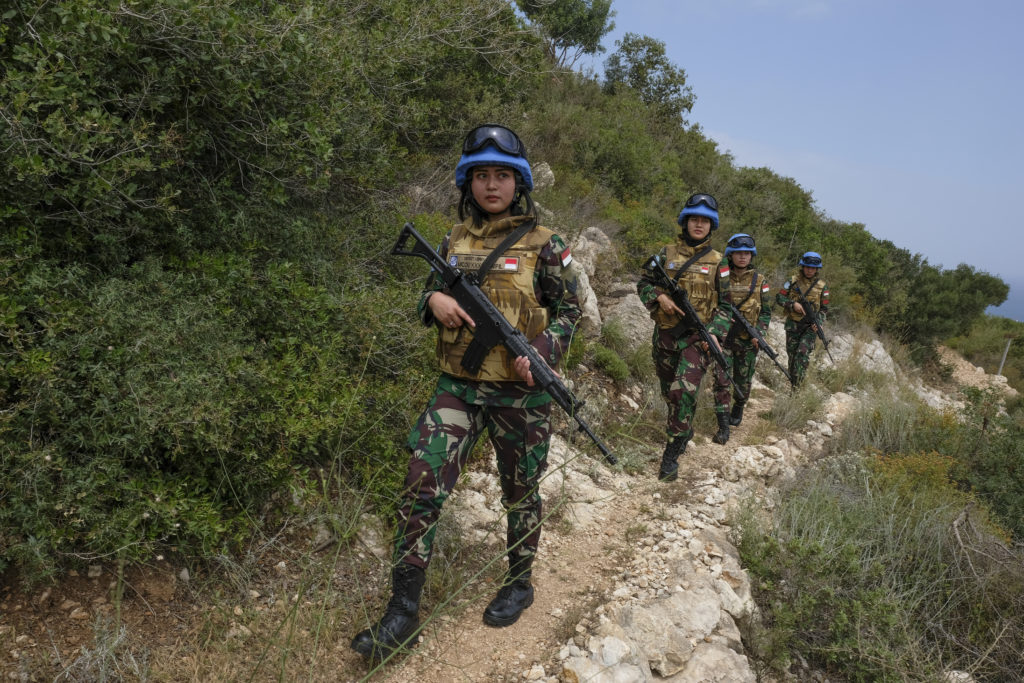 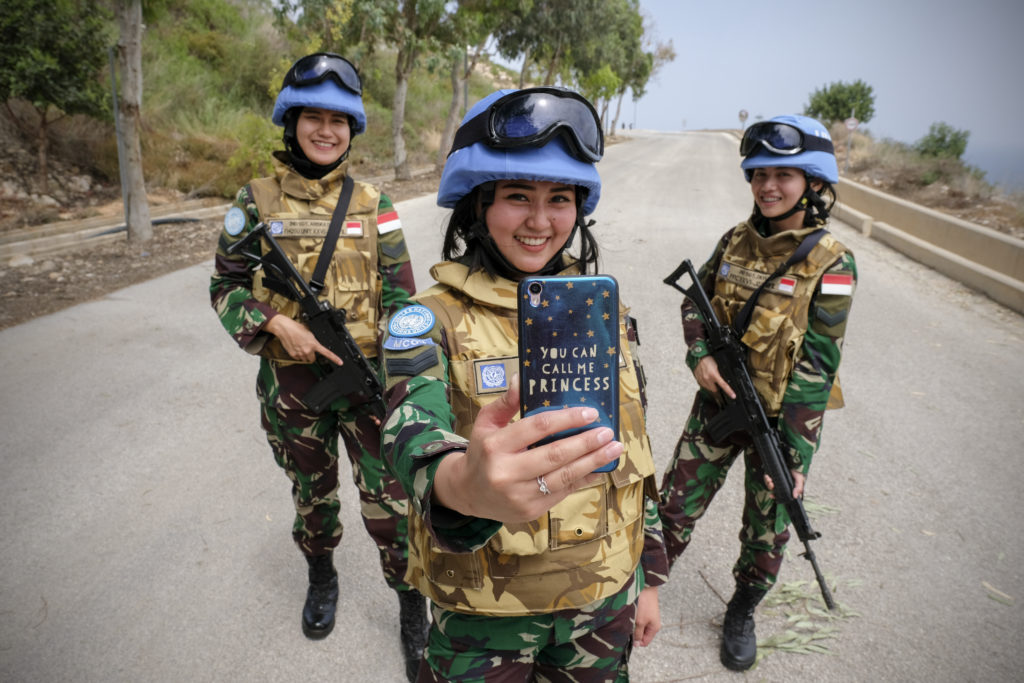 2nd Sgt. Venny Greace of the Indonesian Army in a lighter moment after patrolling the Blue Line buffer zone between Israel and Lebanon. Photo by Sebastian Rich 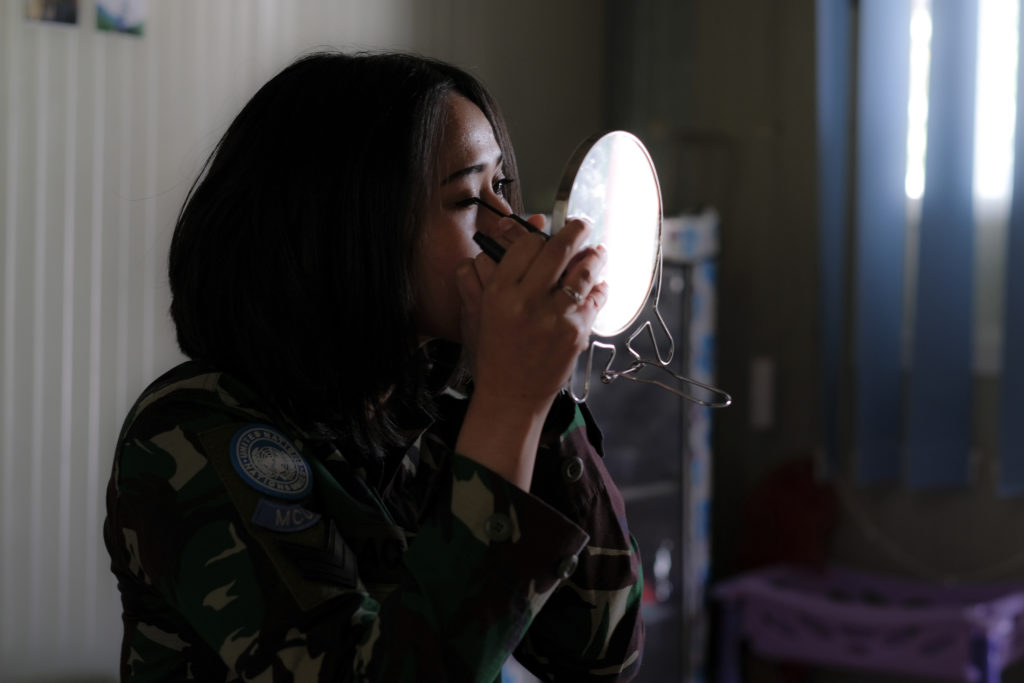 2nd Sgt. Venny Greace of the Indonesian Army puts on make up in her down time. “ I feel so good to have the experience to be here in Lebanon as a peace keeper. I am the only woman in my particular unit, although I do go on patrol with other women soldiers at times. It is a bit of a struggle physically being the only woman in my unit at times to be able to keep up with the men, but I do it . I am also representing my country and I want to make my country proud. I joined the Army to be useful to my country. But I do miss my family and boyfriend so much.” Photo by Sebastian Rich

Since 1948, more than 3,500 have lost their lives serving in U.N. peacekeeping operations, according to the U.N. In the last five years, there have been 195 deaths in violent attacks, more than during any other period in the United Nations history.

Women peacekeepers from the world’s armies today play an increasingly prominent role and are crucial in improving the performance of its operations. They serve as police officers, troops, pilots, doctors, nurses, military observers and in civilian posts, including high-level senior command positions. 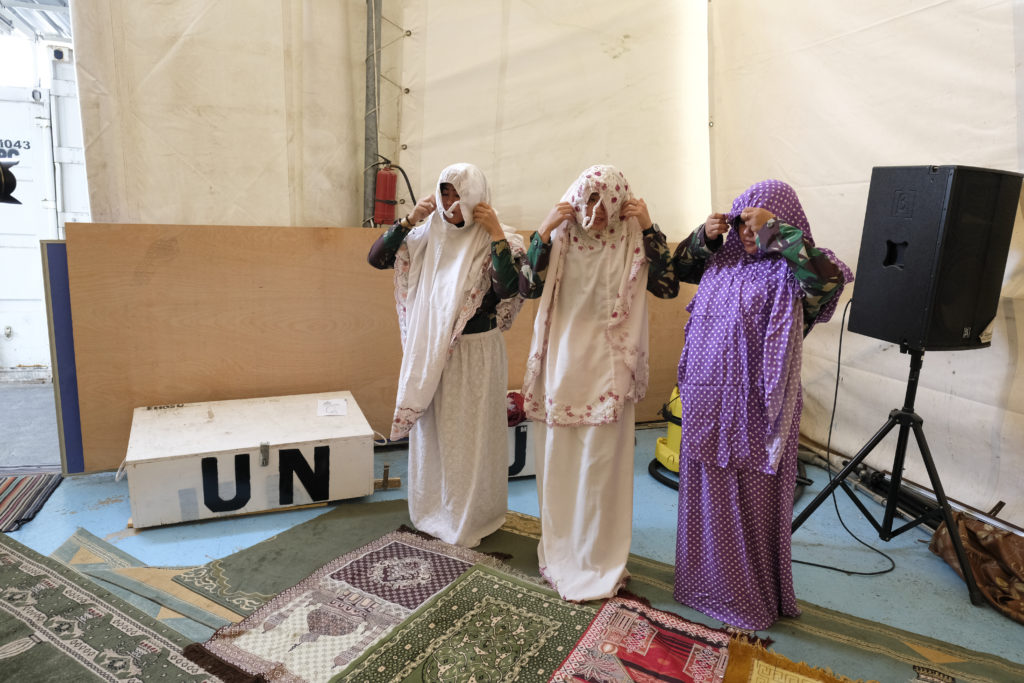 2nd Sgt. Venny Greace of the Indonesian Army prepares to pray with fellow soldiers in a makeshift mosque in the U.N. camp. Photo by Sebastian Rich 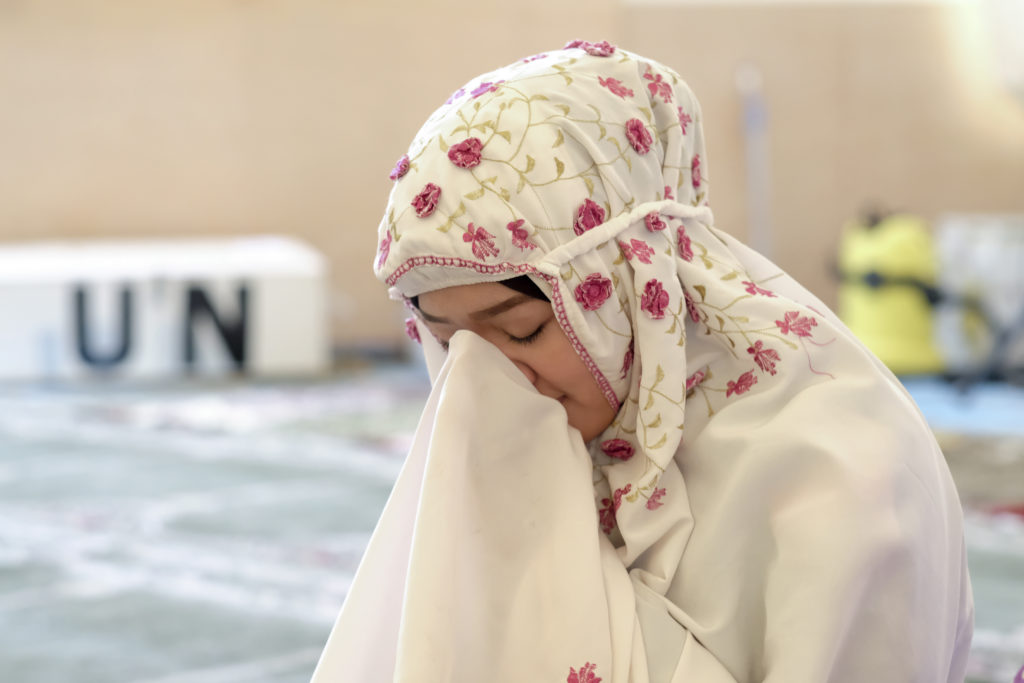 2nd Sgt. Venny Greace of the Indonesian Army prays in a makeshift mosque at the U.N. camp. Photo by Sebastian Rich

A high-ranking British Army female officer I spoke with said the constant struggle for women to prove themselves can be exhausting. There is pressure to be seen as a serious soldier, not a sexual object, she added. 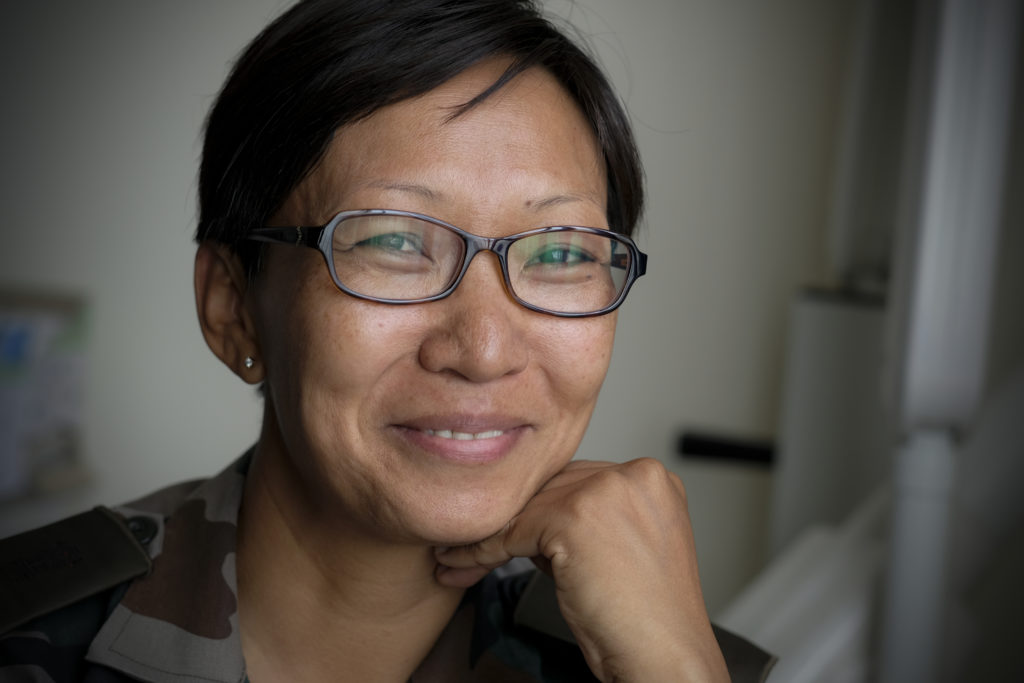 Lt. Col. Neikhrietuonuo Linyu of the Indian Army and chief medical officer at UNIFIL headquarters, said, “I never wanted to be a doctor as a child. I wanted to be a traffic cop. I wanted to wear a uniform. I always wanted to be in control. So I joined the Army and the parachute regiment, where I had to keep up with the men. This made me who I am today. The men at the beginning were wary of me. Then they saw I could do the same as them if not better. They eventually came around, but it’s been tough. I also climbed and got to the summit of Mount Everest to prove to myself that I could do it. It was a spiritual experience, my goodness it was, just to watch the sunrise from the summit, spiritual indeed.” Photo by Sebastian Rich 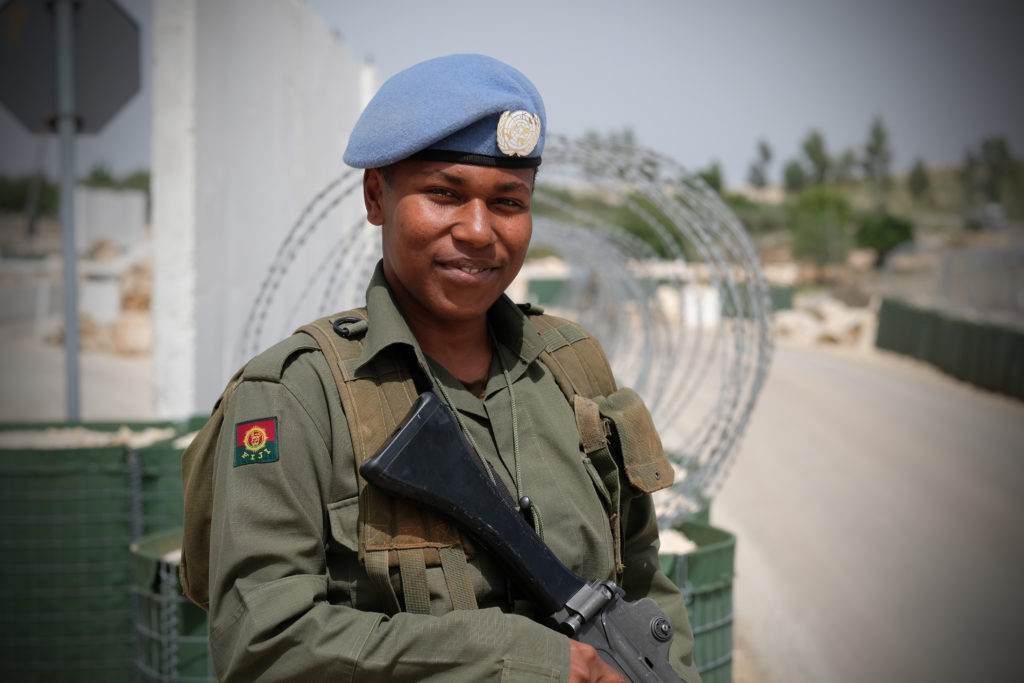 Tikoinayevo, 21, of the Fijian Army, said, “I joined the army to serve my country, and I am very proud to be here in Lebanon as part of the peacekeeping force. But I do miss my family very much indeed, but it’s worth it to serve. I have not had any problems being a woman in the Fijian Army, none.” Photo by Sebastian Rich

As a father, I have a vested interest in women in the military. My own youngest daughter joined the British Army just over a year and a half ago. Luckily she has nothing but praise and loyalty to the regiment and the Army and is living the life she wants. She is a tough cookie but very much in a man’s world. I worry sometimes, of course I do, a father can’t help it, but I’m so very proud. 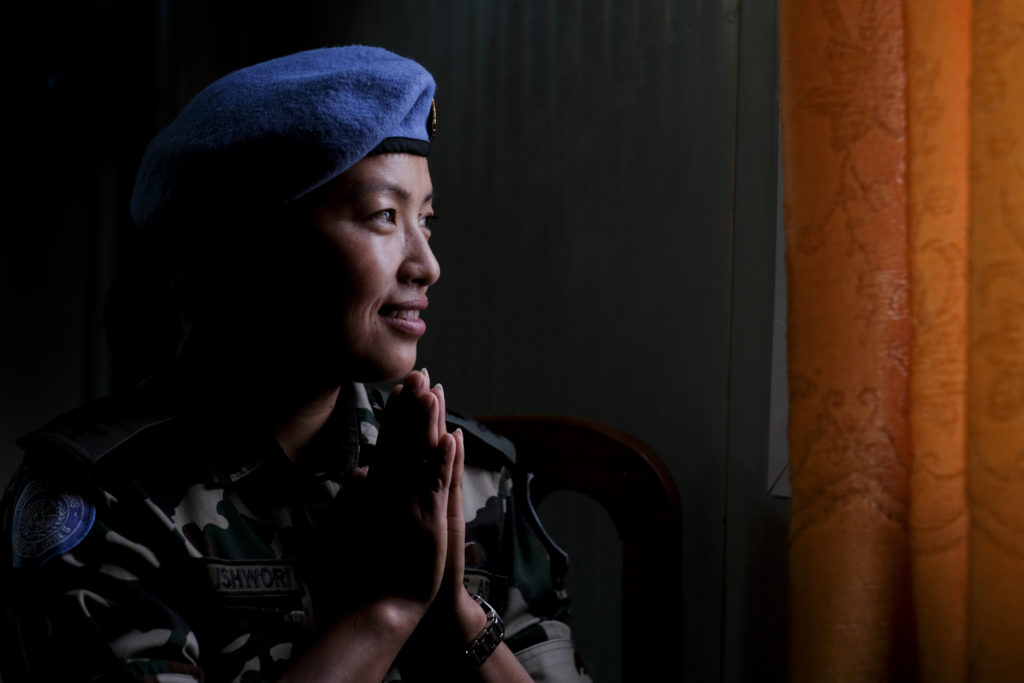 Capt. Ishwori Thakuri, 32, of the Nepalese Army and the gender officer. Photo by Sebastian Rich 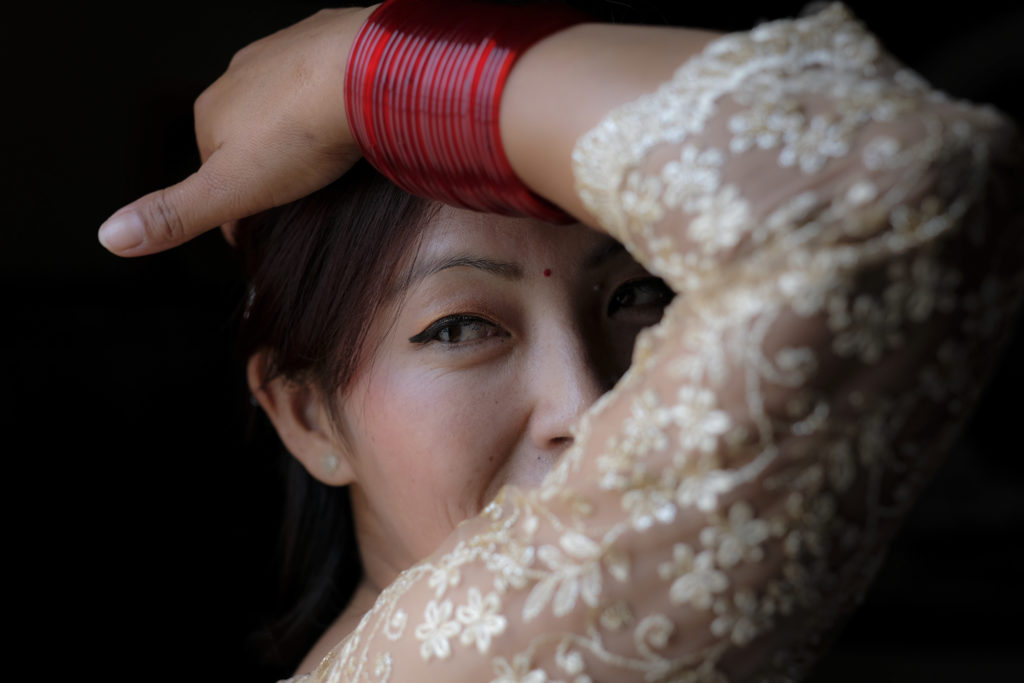 Capt. Ishwori Thakuri of the Nepalese Army and the gender officer in her national dress. “My role as the gender officer here with the Nepalese Army is to promote and create a comfort zone for serving women. For example, during the menstruation time I am here for them and to help solve any issues they may have at this time. The Nepalese male soldiers respect women deeply and respect the rank. I came here to Lebanon as a U.N. peacekeeper not as a woman.” Photo by Sebastian Rich

I found during interviews with women soldiers, not just in the U.N. but in the military as a whole, that they were more willing to discuss their emotions, situations and life in general than men. A dialogue that they believe unequivocally helps in their leadership of men and women.

But on the flip side, those same female officers in positions of command say that this sensitivity cannot be displayed outside the barracks, in front of male soldiers. This would be seen as a weakness, a chink in the armor if you will, and cast doubt on their leadership qualities. 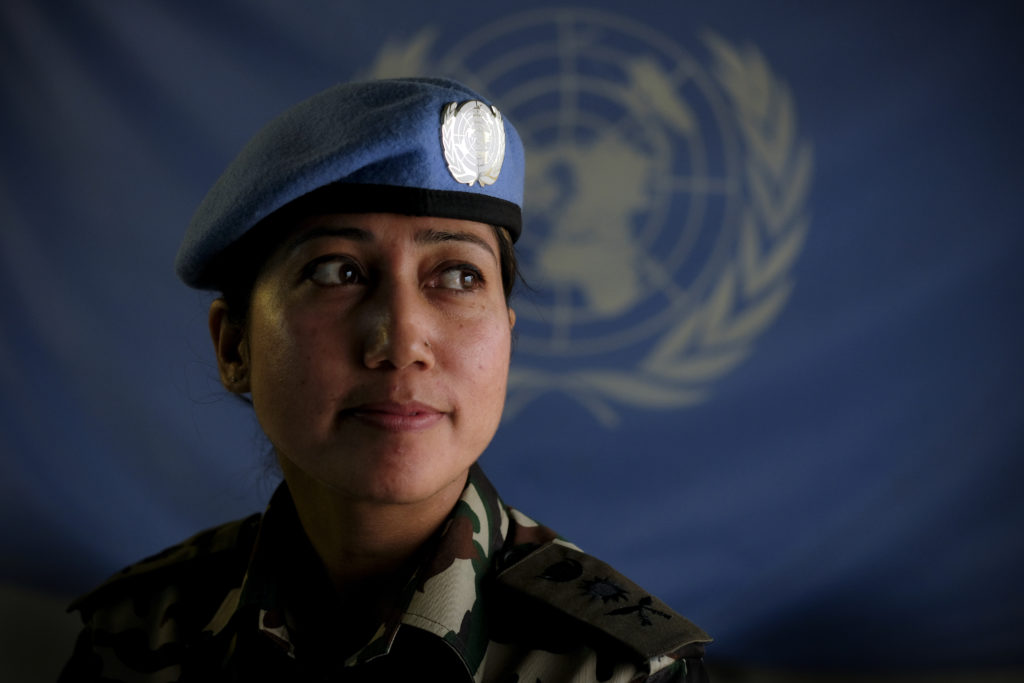 Capt. Kamala Thapa of the Nepalese Army, said, “Since I was 7 years old, I wanted to be a soldier, and my dreams have come true becoming an army doctor. I have a daughter Bipasyana, she is 4 years old, but I have not seen her in four months. I had a very hard time in basic training keeping up with the men, especially the running. I always burst into tears when I could not keep up with them. But I made it with the help of our Lord God Shiva and I am here now to serve the Lebanese people.” Photo by Sebastian Rich 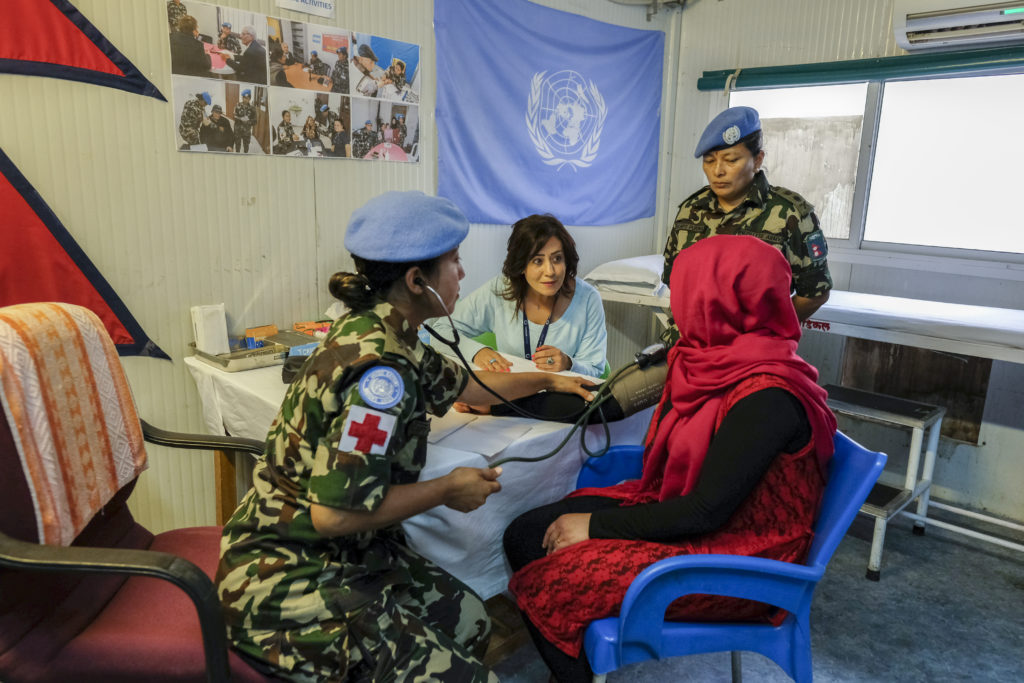 Capt. Kamala Thapa of the Nepalese Army and a doctor examines local Lebanese villagers at the U.N. camp. Photo by Sebastian Rich 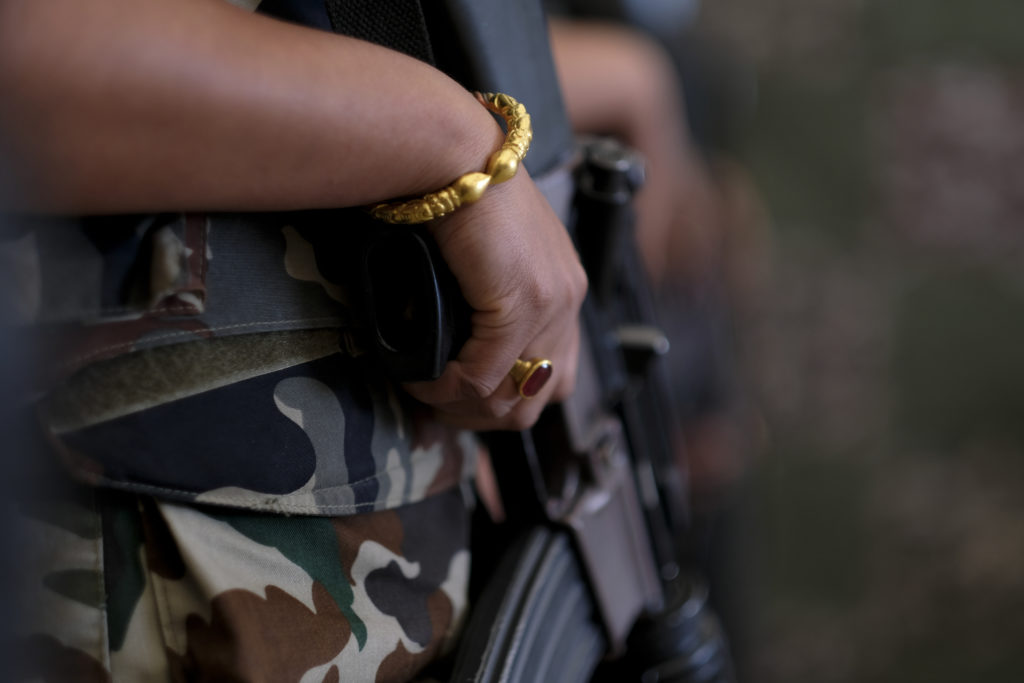 The hand of a female Nepalese Army U.N. peacekeeper rests on her weapon. Photo by Sebastian Rich 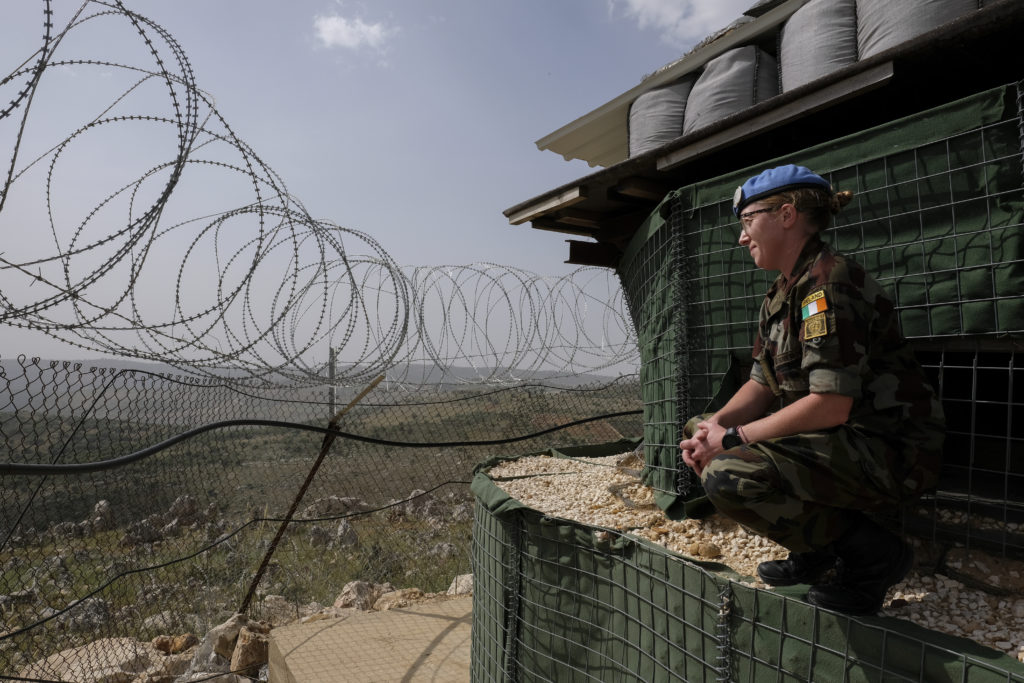 Jackie Sheehan, 37, of the Irish Army looks out into Israel from the buffer zone along the border with Lebanon. “I am a career soldier, a physical training instructor. I love being in the army, it’s all I have ever done for the past 16 years. I have had no issues at all being a woman in the Army, none. I am glad of the chance to be serving as a U.N. peacekeeper here in Lebanon, and proud.” Photo by Sebastian Rich 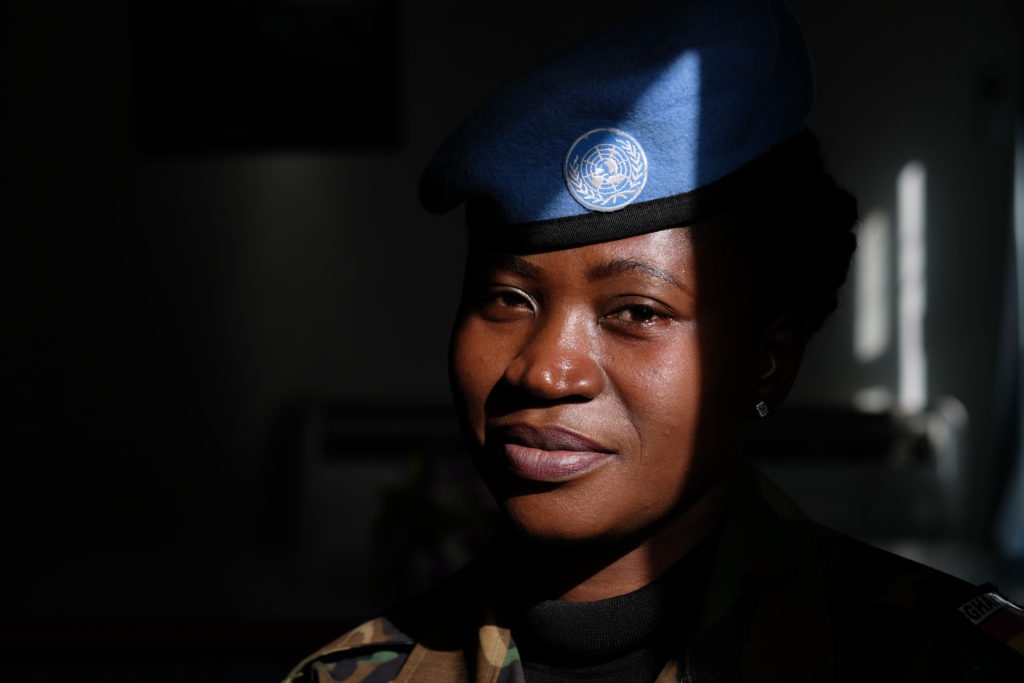 Beatrice, 32, of the Ghanaian Army, said, “I miss my family very much, but I love being here in Lebanon serving my country and trying to help the local community any way I can. I have not had any problems with being a woman in the Army.” Photo by Sebastian Rich 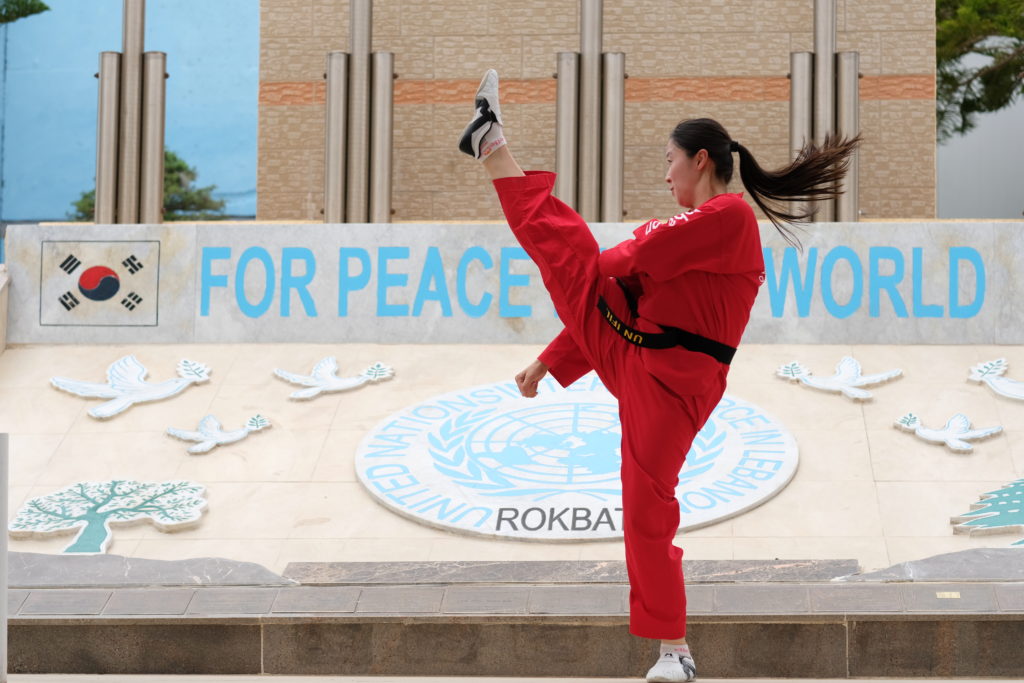 Sgt. 1st Class Tark Kung-ah, 30, is in Special Forces of the South Korean Army, a physical training instructor and Tae Kwon Do master. “I am very proud to be part of the peacekeeping force here in Lebanon, and my country is proud of me. I lead men and they have to take orders from me. It’s not a problem. Well, not for me.” Photo by Sebastian Rich

Left: 2nd Sgt. Venny Greace prepares for a patrol in the buffer zone between Israel and Lebanon. Photo by Sebastian Rich