One day after the 7.8 magnitude earthquake ravaged Nepal on Saturday, a series of aftershocks have continued to shake the region, one of which measured 6.6 on the Richter scale.

More than 2,500 people were killed, and nearly 6,000 injured. In response to the unfolding humanitarian crisis, the Nepalese government has set up 16 relief stations across Kathmandu, the New York Times reported.

The massive quake also set off an avalanche on Mount Everest, which killed at least 18, and injured another 61, according to the Associated Press. Aid workers continue to search for survivors, as planeloads of supplies, doctors and relief workers begin to arrive on the scene.

The United States government plans to send a disaster response team and has pledged at least $1 million in aid. 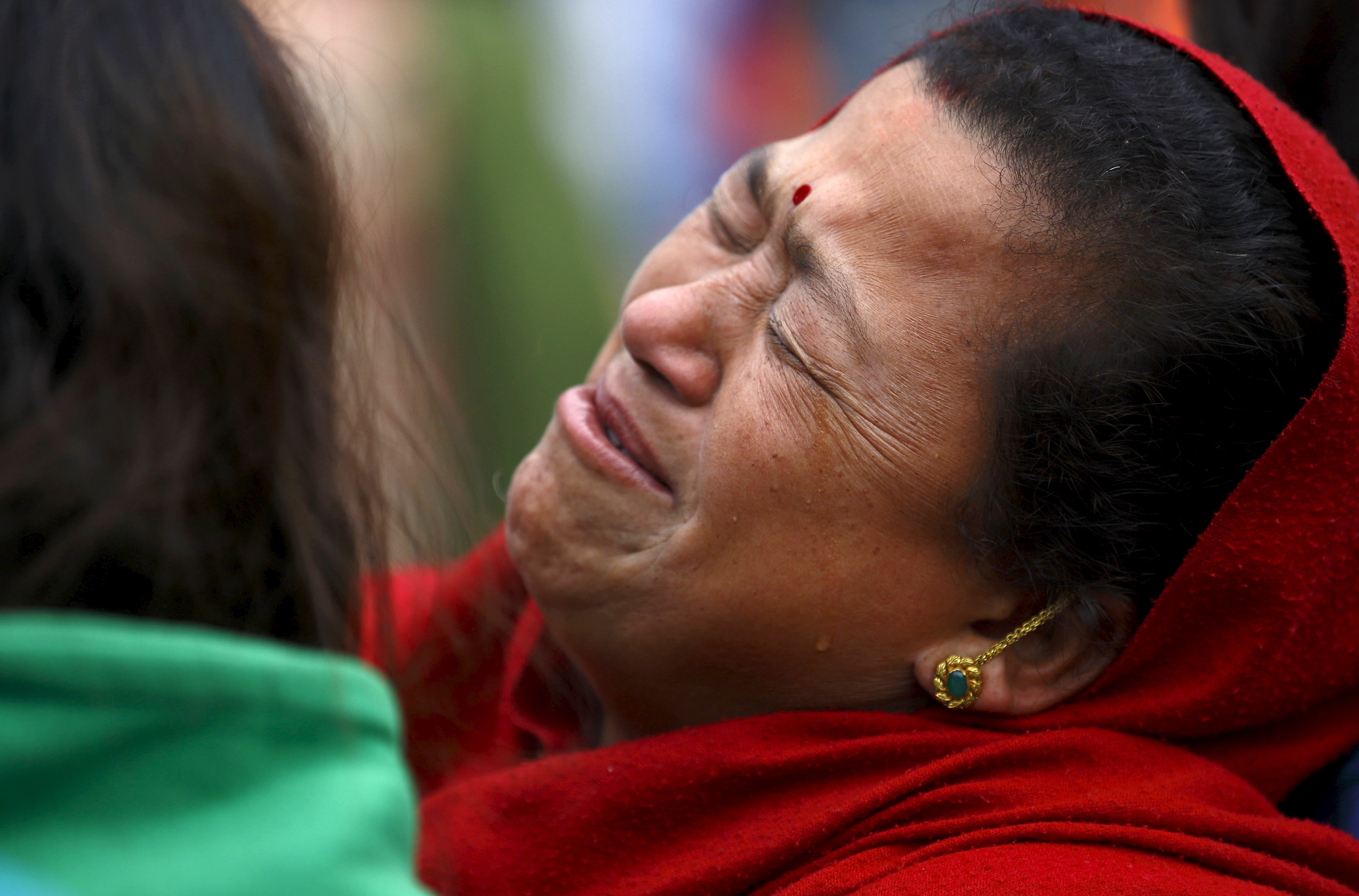 A woman mourns the death of a family member a day after an earthquake in Bhaktapur, Nepal April 26, 2015. Photo by Navesh Chitrakar/REUTERS 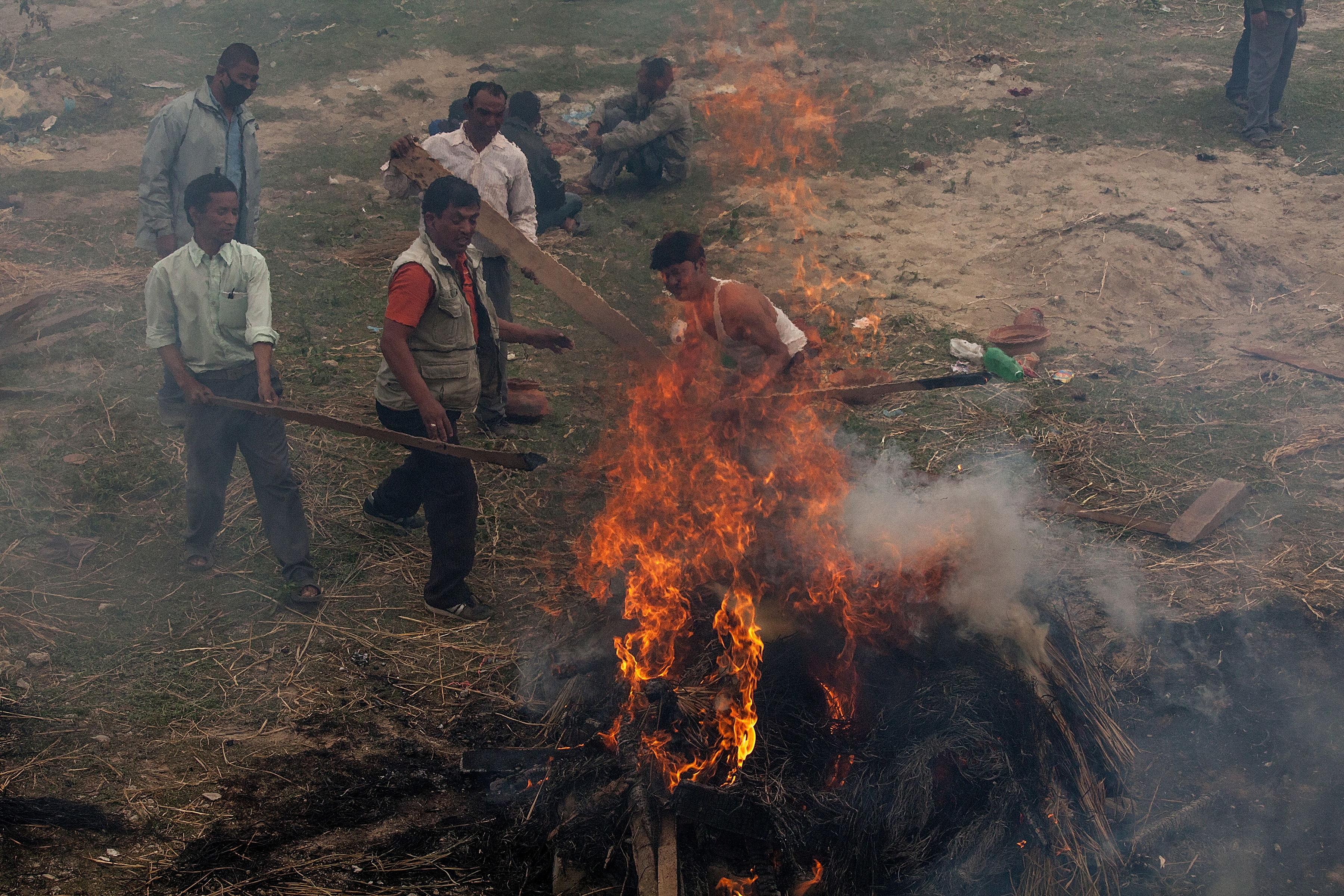 Victims of the earthquake that hit Nepal yesterday are cremated on April 26, 2015 in Bhaktapur, Nepal. Photo by Omar Havana/Getty Images 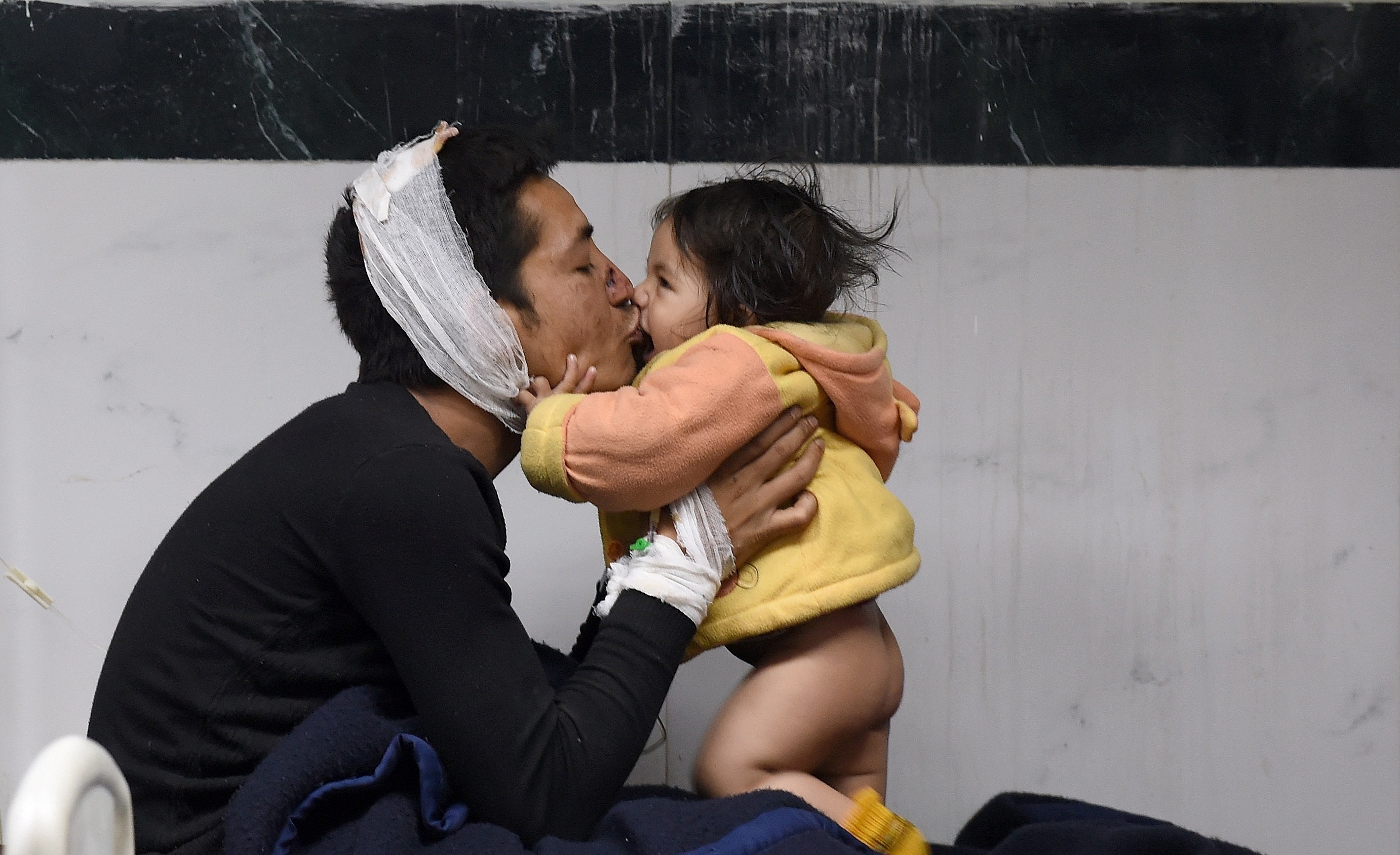 Nepalese resident Suresh Parihar plays with his 8-month-old daughter Sandhaya as he is treated for injuries sustained in an earthquake at a city hospital in Kathmandu on April 26, 2015. Photo by Prakash Singh/AFP/Getty Images 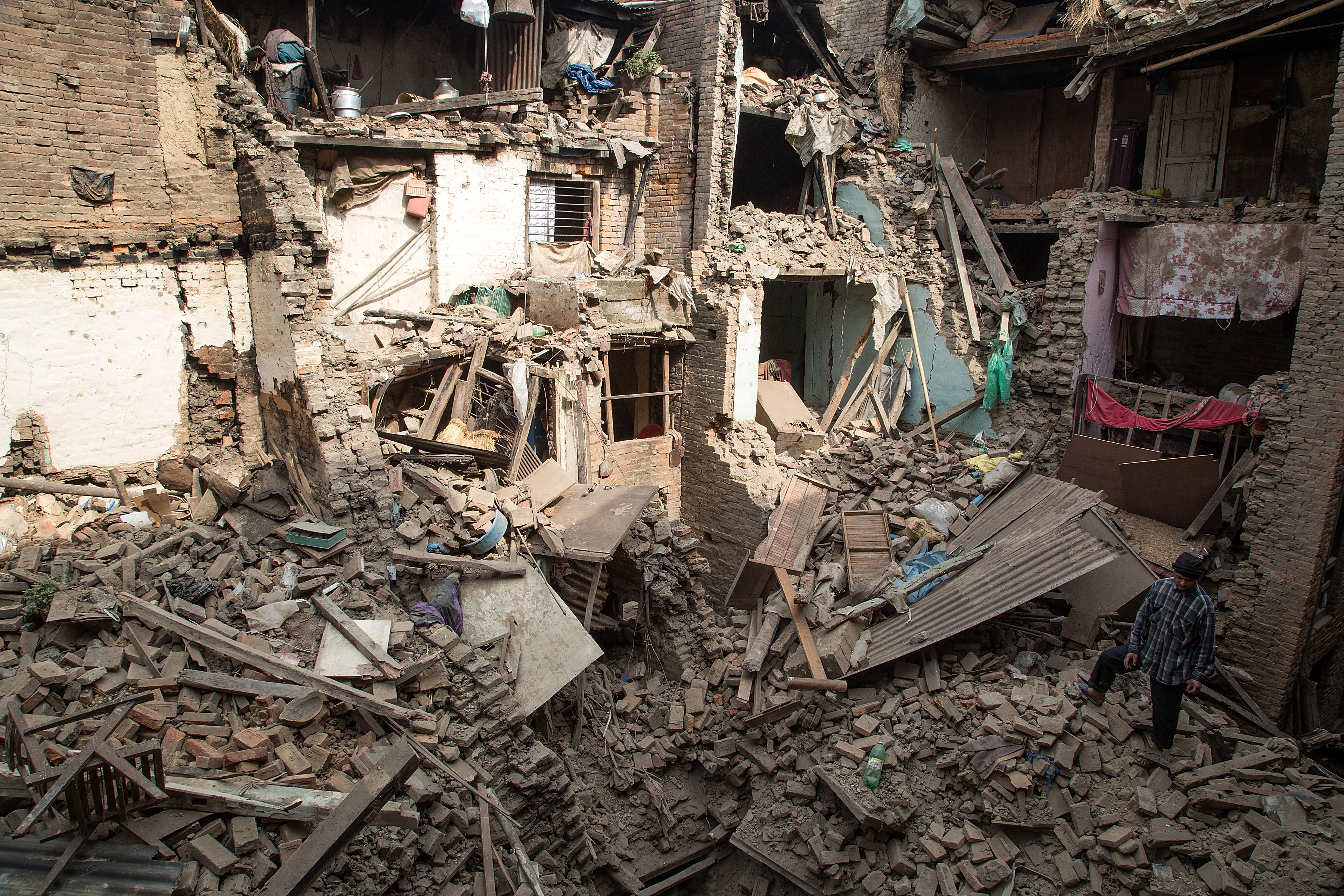 Many houses, buildings and temples in the capital were destroyed during the earthquake, leaving thousands dead or trapped under the debris as emergency rescue workers attempt to clear debris and find survivors. 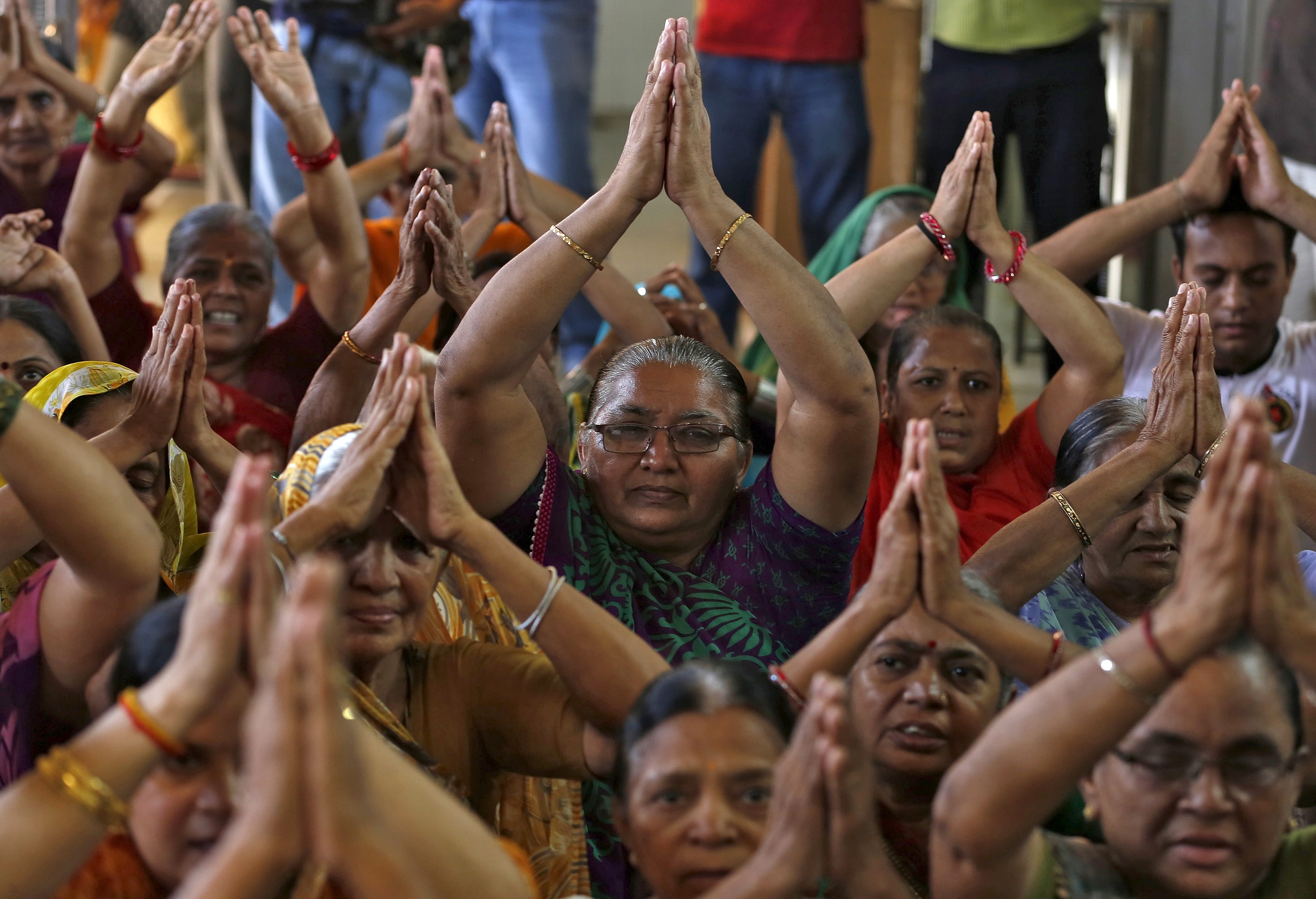 Women chant hymns during a prayer ceremony at a temple in Ahmedabad, India, April 26, 2015, for victims of Saturday’s earthquake in Nepal. Rescuers dug with their bare hands and bodies piled up in Nepal on Sunday after the earthquake devastated the heavily crowded Kathmandu Valley. Photo by Amit Dave/REUTERS 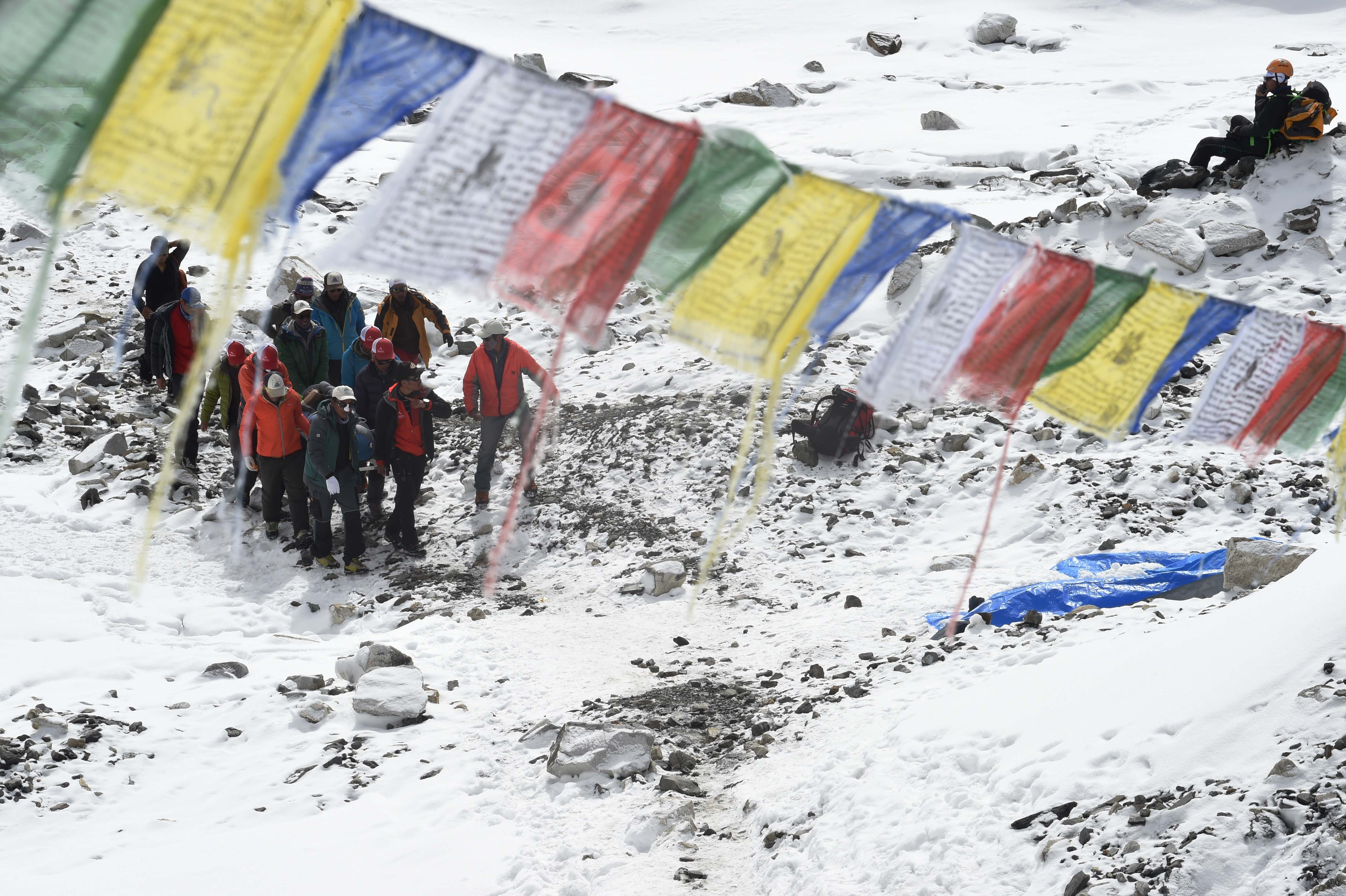 Rescue team personnel carry an injured person towards a waiting rescue helicopter at Everest Base Camp on April 26, 2015, a day after an avalanche triggered by an earthquake devastated the camp. Photo by Roberto Schmidt/AFP/Getty Images 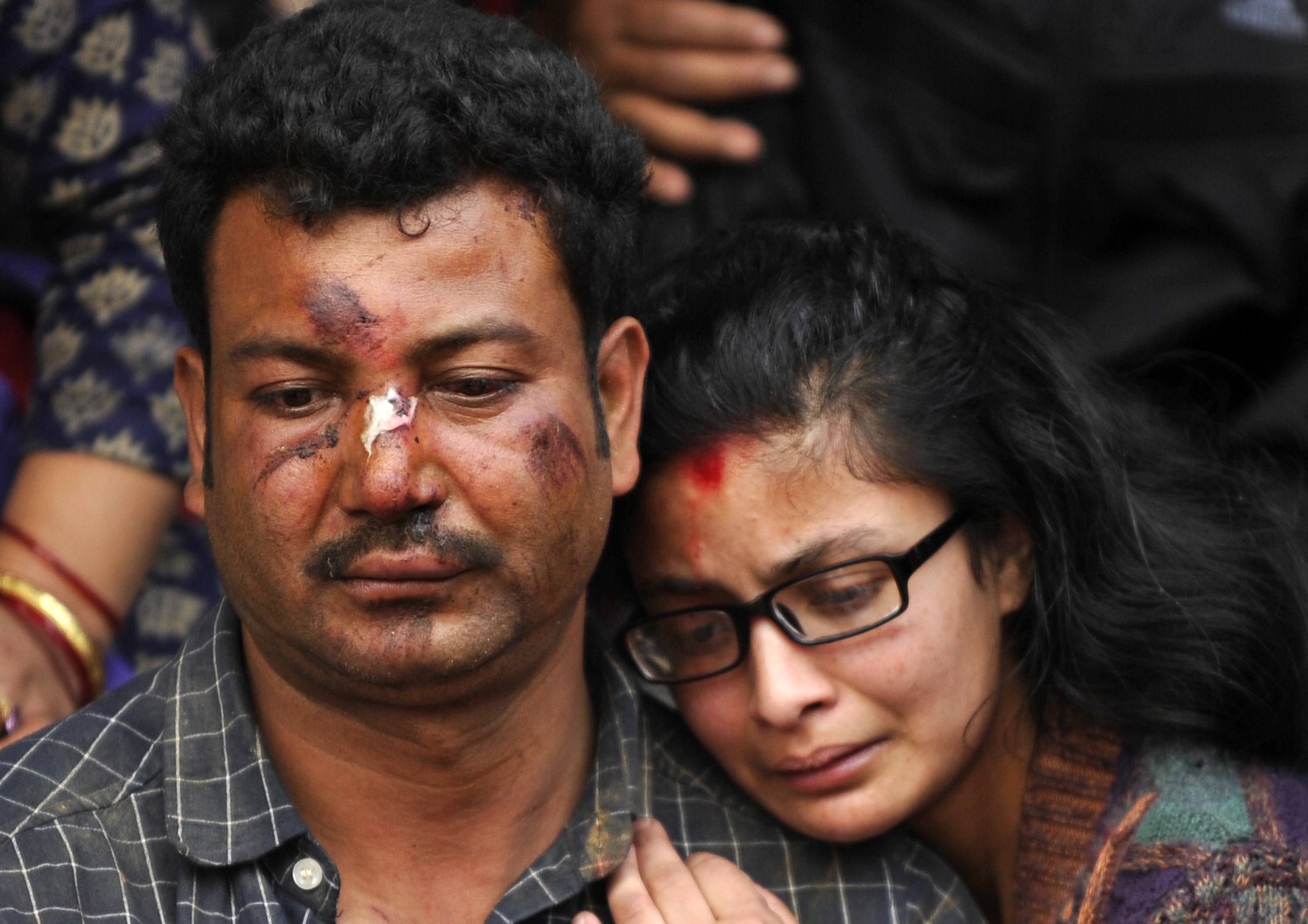 Nepalese residents mourn the death of a relative following an earthquake, at a mass cremation at Pashupatinath in Kathmandu on April 26, 2015. Photo by Prakash Mathema/AFP/Getty Images 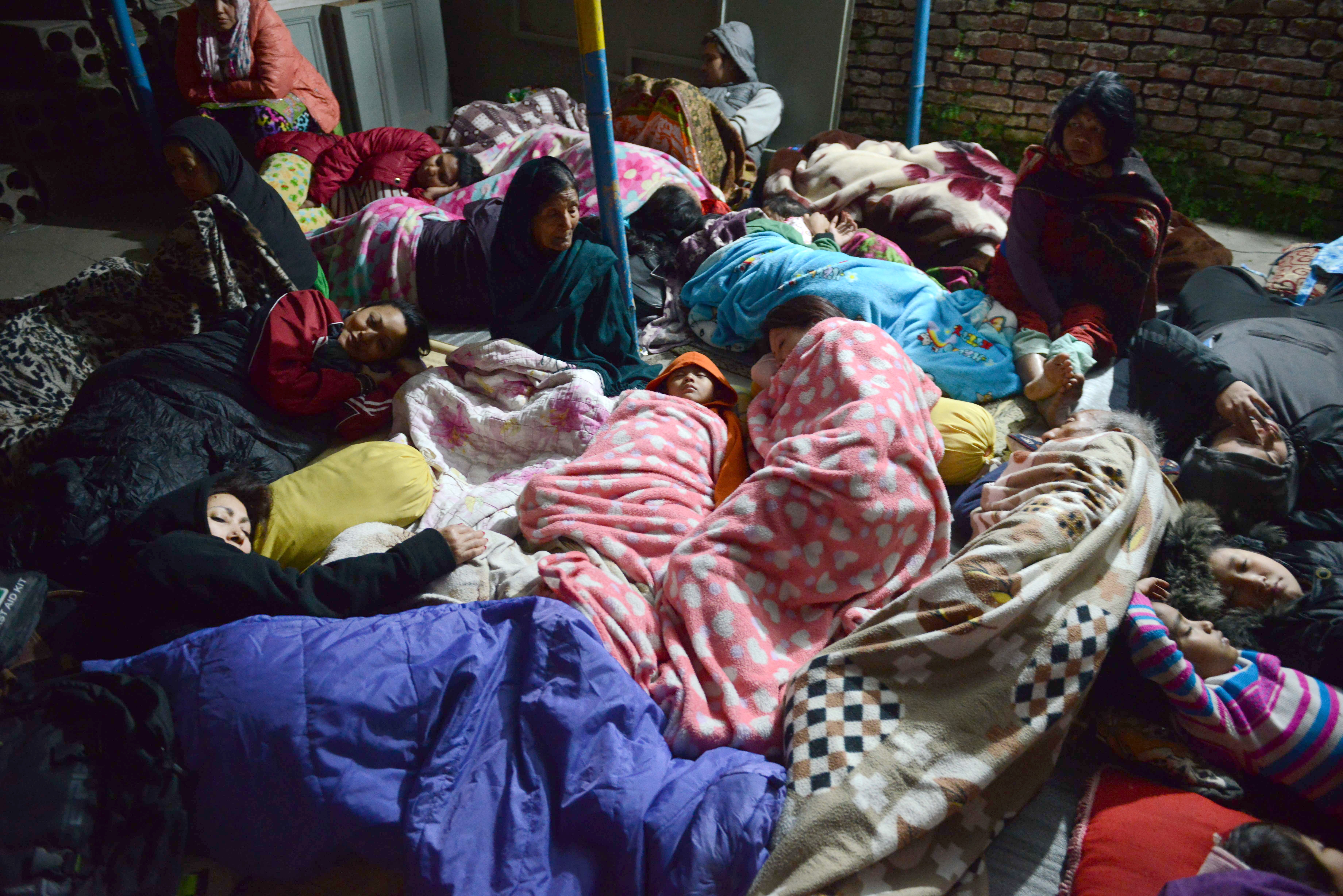 Nepalese residents sleep in an open area in Kathmandu on April 26, 2015, after an earthquake hit the Kathmandu Valley. Photo by Prakash Mathema/AFP/Getty Images 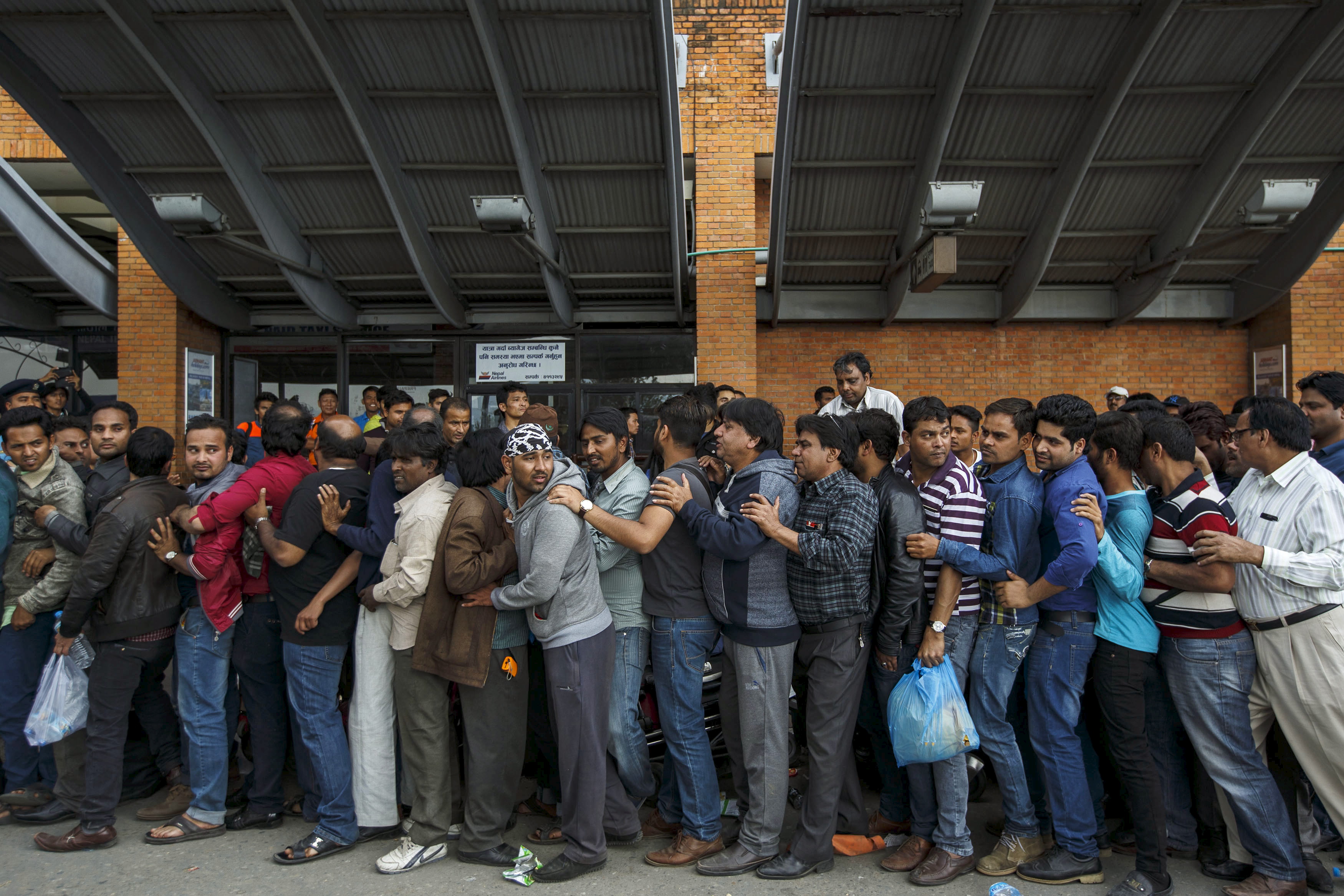 People queue up as they wait for an aircraft to evacuate to their country at Nepal’s Tribhuvan International Airport a day after a 7.9 magnitude earthquake, in Kathmandu, Nepal April 26, 2015. Photo by Athit Perawongmetha/REUTERS 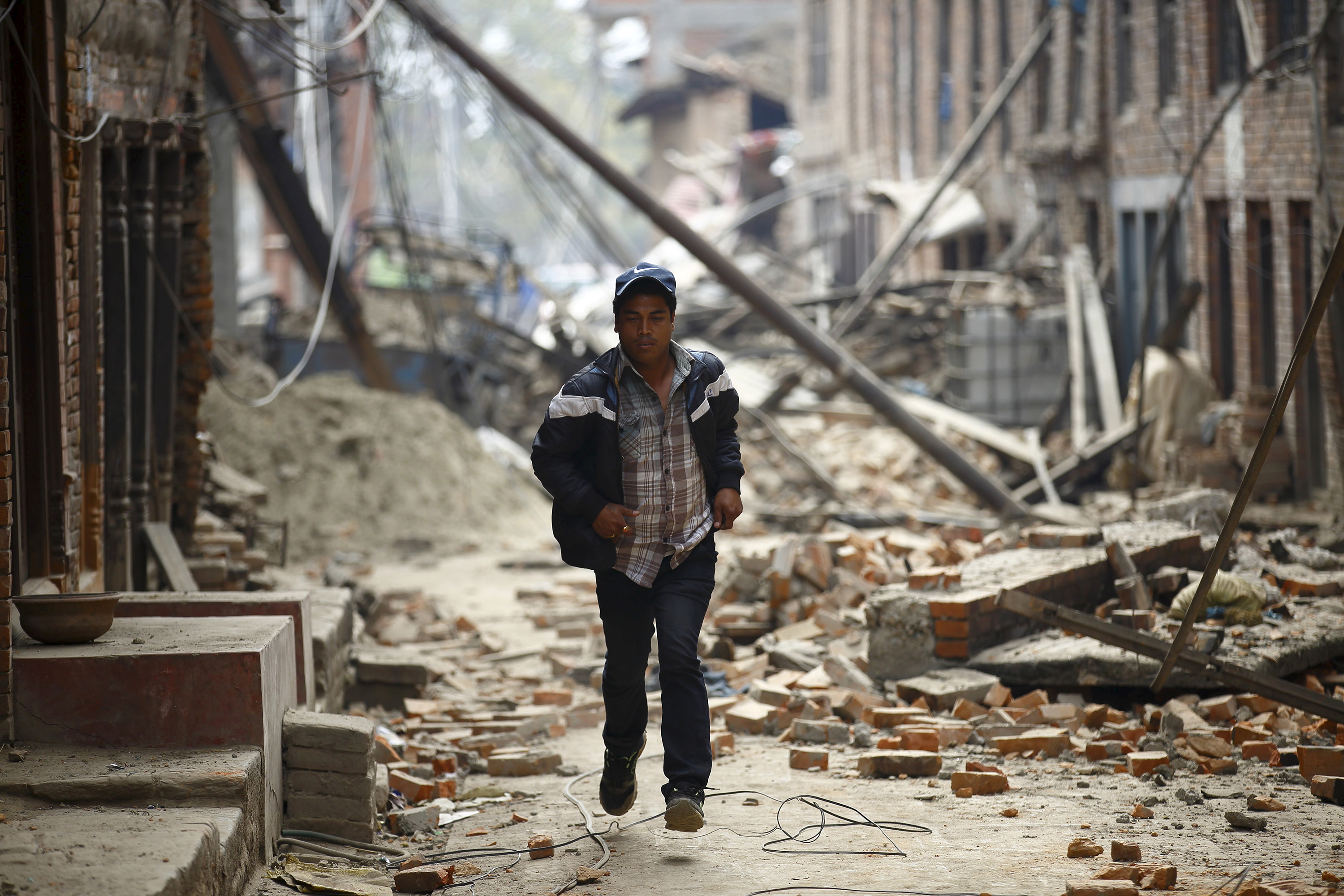 A man runs past damaged houses as aftershocks of an earthquake are felt a day after the earthquake in Bhaktapur, Nepal April 26, 2015. Photo by Navesh Chitrakar/REUTERS

Left: A woman sits outside a makeshift shelter in an open ground to keep safe after the earthquake in Kathmandu, Nepal April 26, 2015, a day after Saturday's 7.9 magnitude earthquake which killed more than 2,400 people and devastated Kathmandu valley. Photo by Navesh Chitrakar/REUTERS