Photos: Eid al-Fitr is celebrated around the world 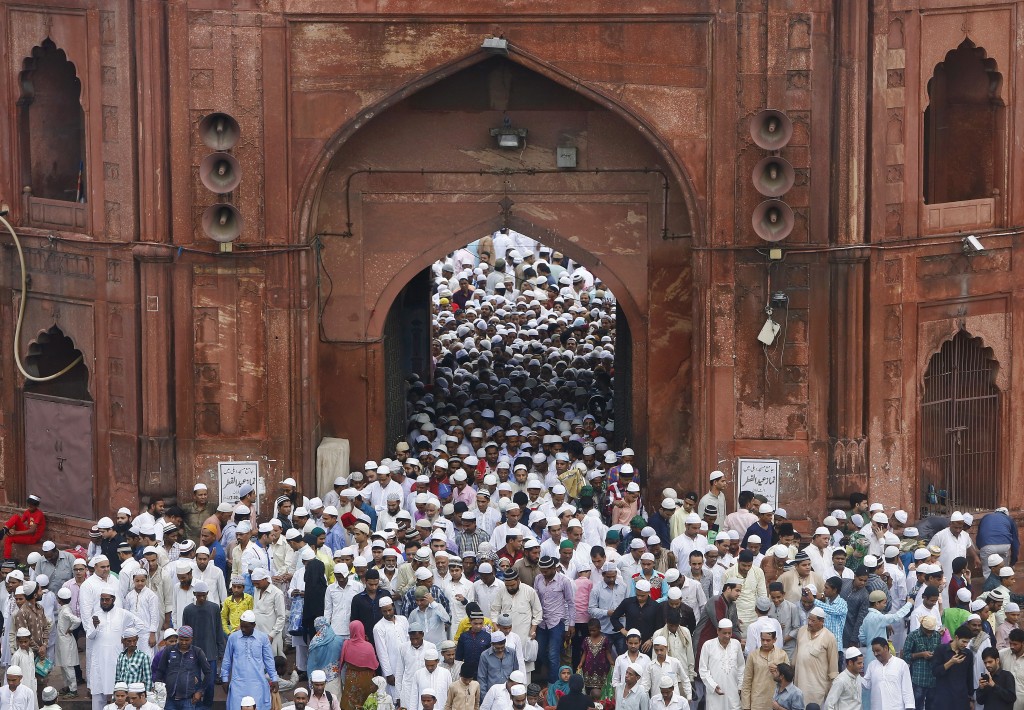 Muslim communities around the world gathered on Friday and Saturday to celebrate Eid al-Fitr, the Festival of Fast-Breaking. 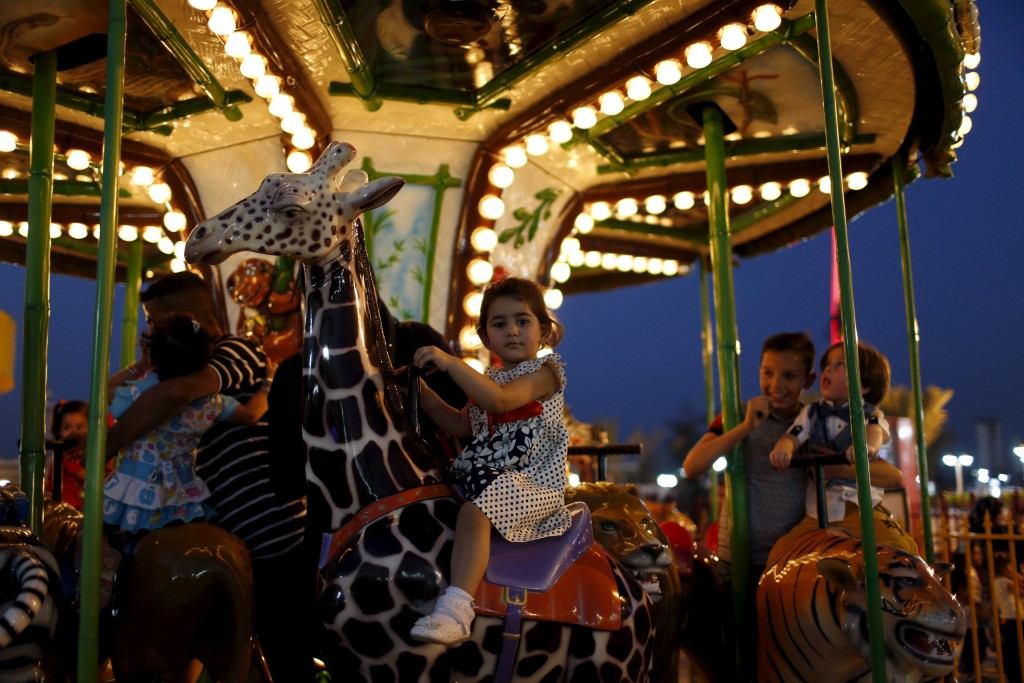 A child enjoys a ride in an amusement park during Eid al-Fitr celebrations in Baghdad on July 17, 2015. Photo by Thaier al-Sudani/Reuters 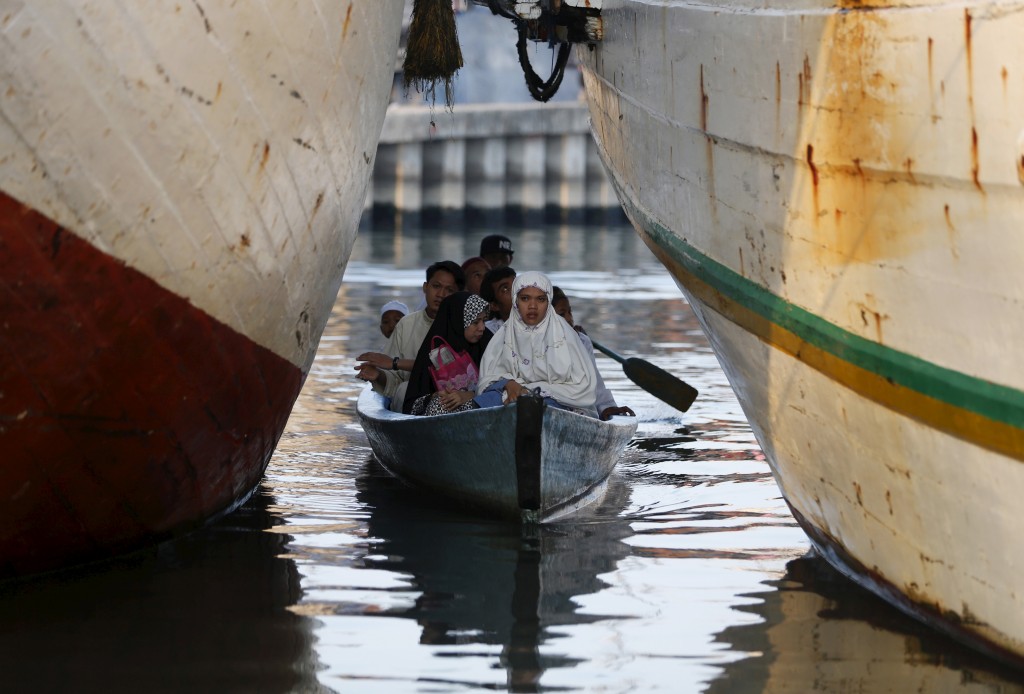 Muslims from a nearby neighborhood arrive by boat to attend Eid al-Fitr prayers at Sunda Kelapa port in Jakarta, Indonesia on July 17, 2015. Indonesia, which has the world’s largest Muslim population, celebrates Eid al-Fitr with mass prayers and family visits to mark the end of the holy fasting month of Ramadan. Photo by Darren Whiteside/Reuters 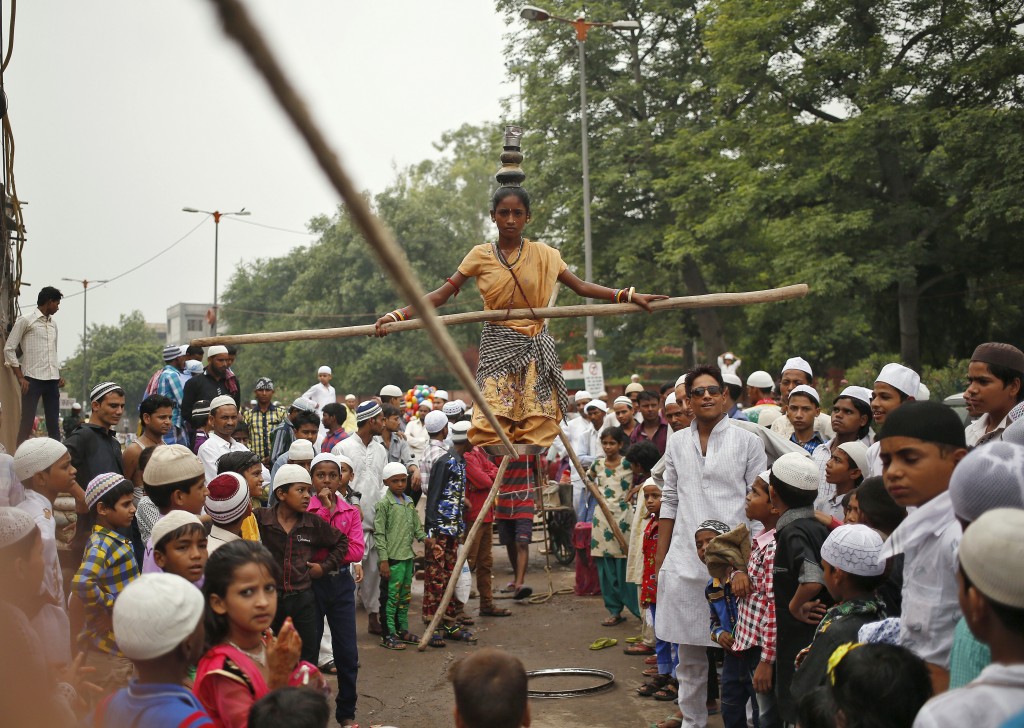 A tightrope walker performs holding a balancing pole on the occasion of Eid al-Fitr in New Delhi, India on July 18, 2015. Festivities around the world include everything from circuses to open banquets. Photo by Anindito Mukherjee/Reuters

The three-day celebration of Eid al-Fitr marks the end of Ramadan, a holy fasting month. 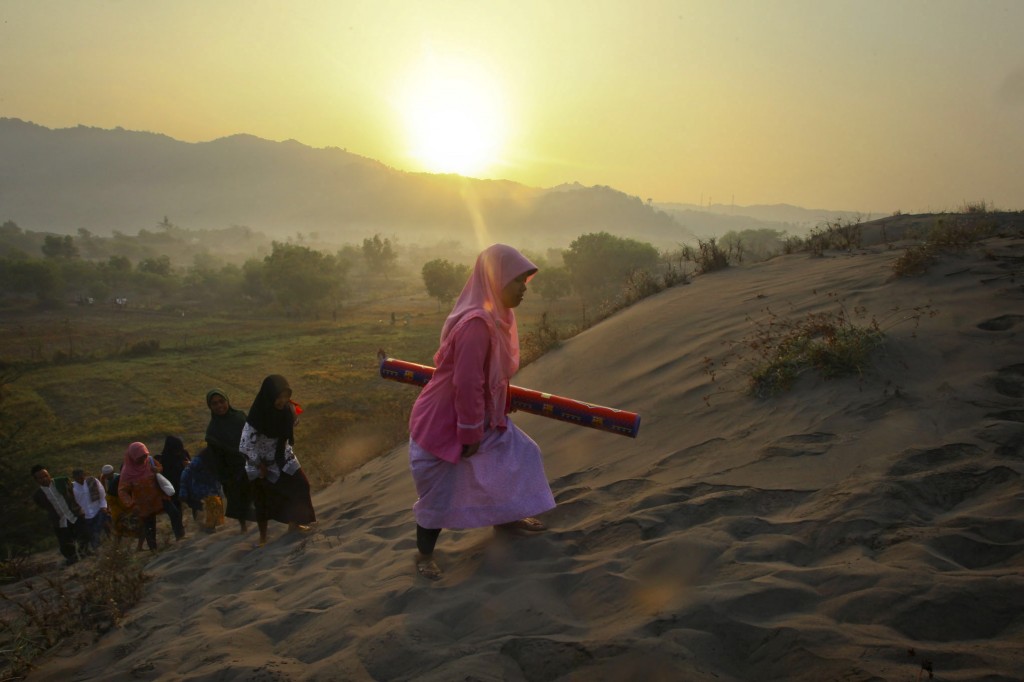 Muslims make their way to attend Eid-al Fitr prayers marking the end of the holy fasting month of Ramadan in the sand dunes at Parangkusumo, near Yogyakarta, Indonesia on July 17, 2015. Photo by Andreas/Reuters

“On Eid, you are encouraged to eat all things that are too rich, too sweet, too creamy for a normal day,” food blogger Sumayya Usmani told the New York Times. 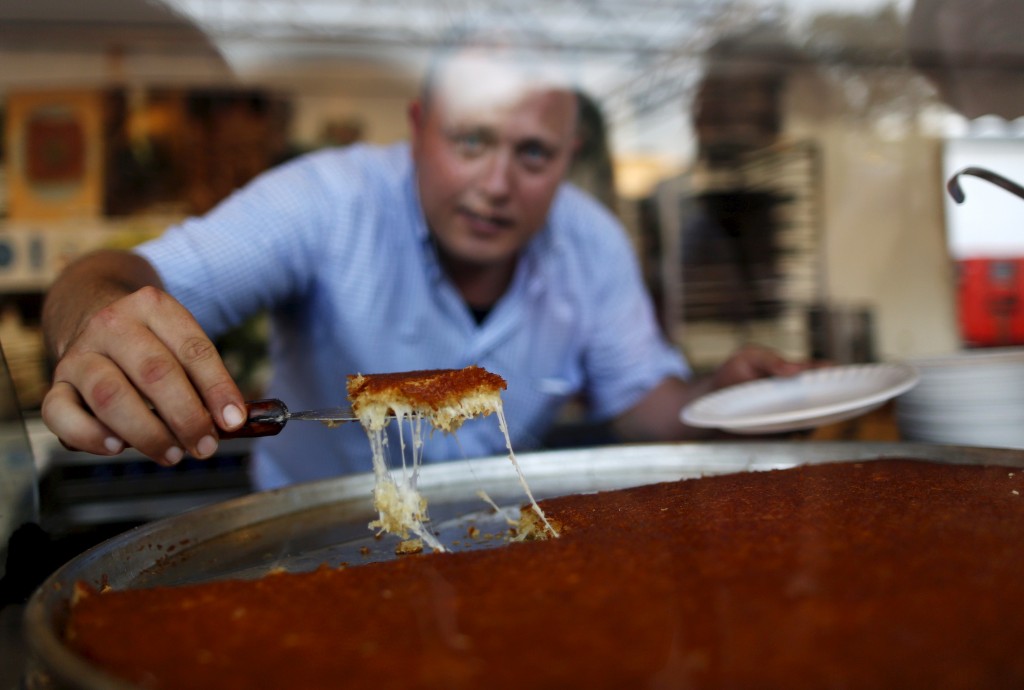 A man takes a sweet cake at his shop at a festival of Eid-al-Fitr to mark the end of the holy fasting month of Ramadan in Dortmund, Germany on July 17, 2015. Sweets are central to the celebration of Eid al-Fitr in breaking fast. Photo by Ina Fassbender/Reuters 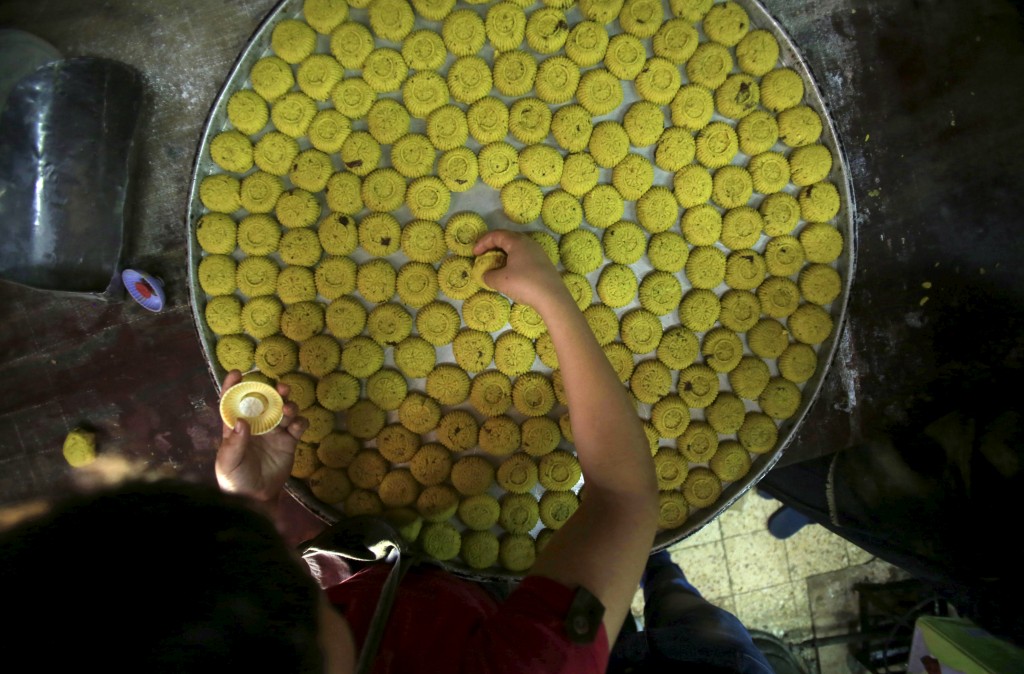 A Palestinian prepares traditional cake at a sweets shop in preparation for Eid al-Fitr in the West Bank city of Nablus on July 15, 2015. Photo by Abed Omar Qusini/Reuters

Eid al-Fitr is not only a celebration of food, but also of charity. Observing Muslims donate meals to the less fortunate so everyone can eat on the  holiday. 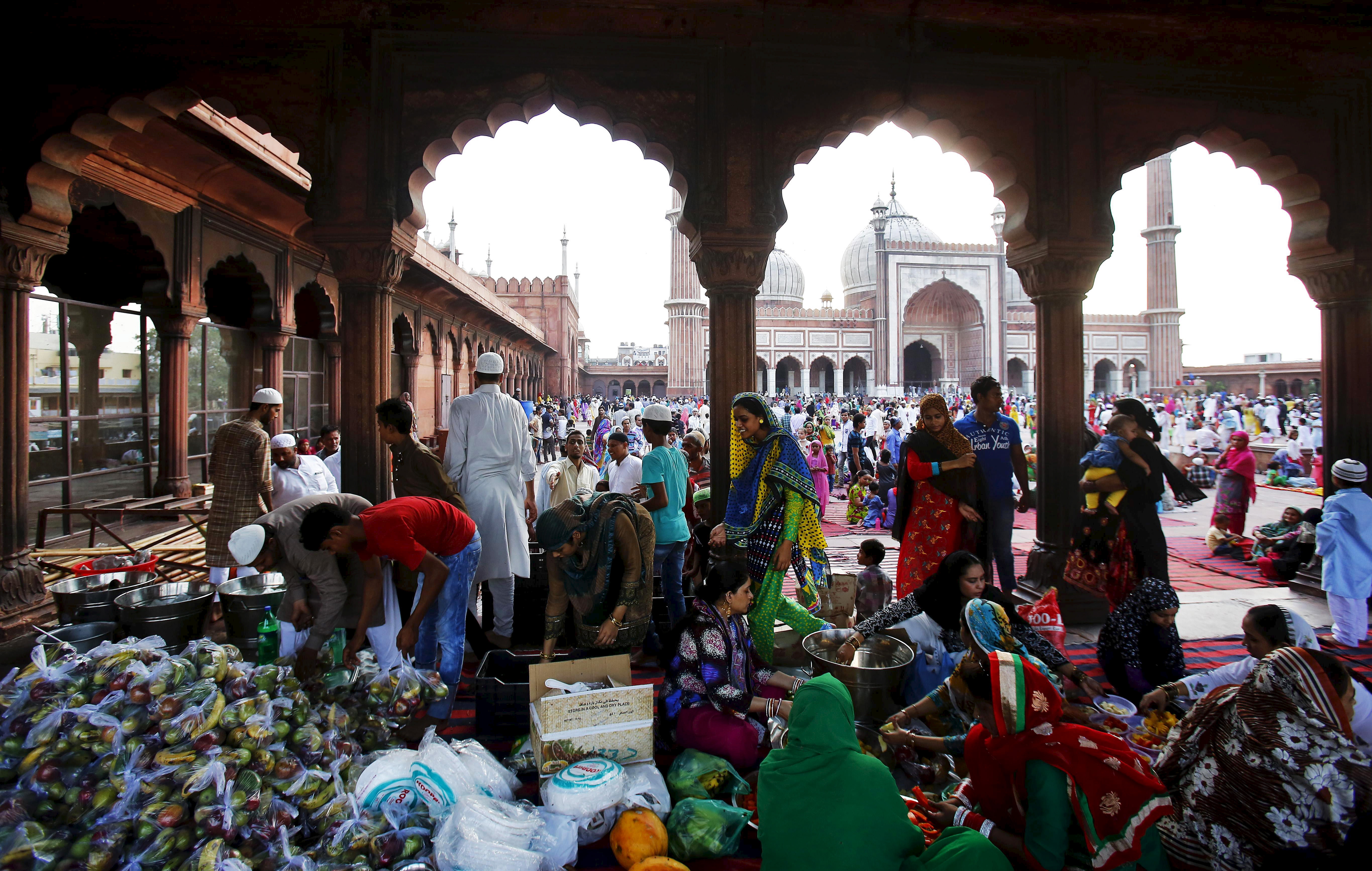 Muslims prepare to distribute free Iftar (breaking of fast) meals as part of charity activities during the holy month of Ramadan at the Jama Masjid (Grand Mosque) in the old quarters of Delhi, India, July 2, 2015. Photo by Anindito Mukherjee/Reuters

Eid al-Fitr is the first day of Shawwal in the Islamic calendar. First and last days of Islamic months are marked by the rise of the new moon. Because of that, the specific date of Eid al-Fitr often differs for different countries, depending on when the new moon is sighted. 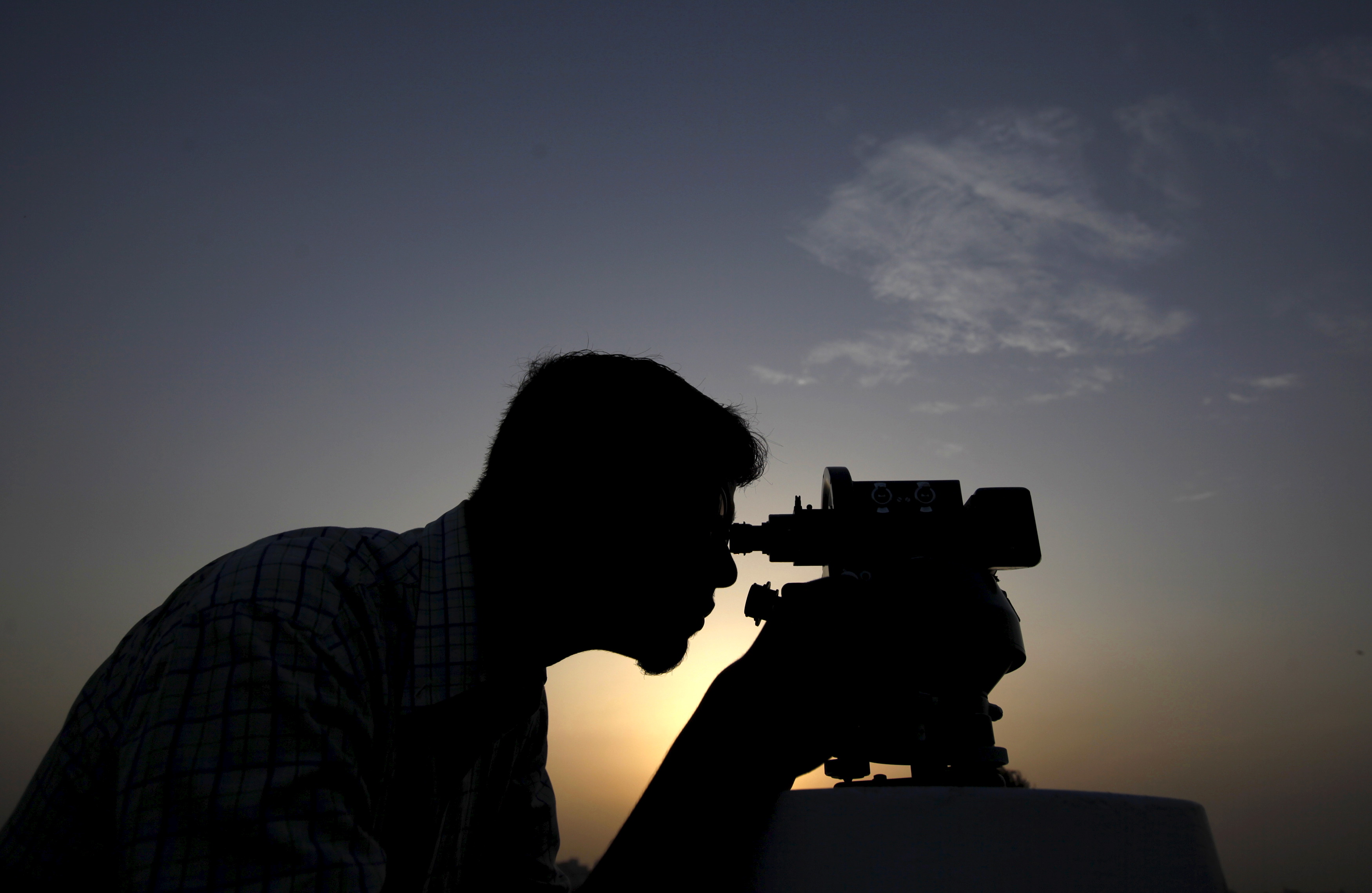 A man’s silhouette is seen as he adjusts a theodolite to look for the new moon that will mark the start of Ramadan, from Pakistan’s Meteorological Department in Karachi, Pakistan, June 17, 2015. The same process is used to determine the official date of Eid al-Fitr. Photo by Akhtar Soomro/Reuters

On Eid al-Fitr, Muslim families gather for morning prayers and the first daytime meal in a month. Men, women, and children also adorn new clothes for the day of festivities. 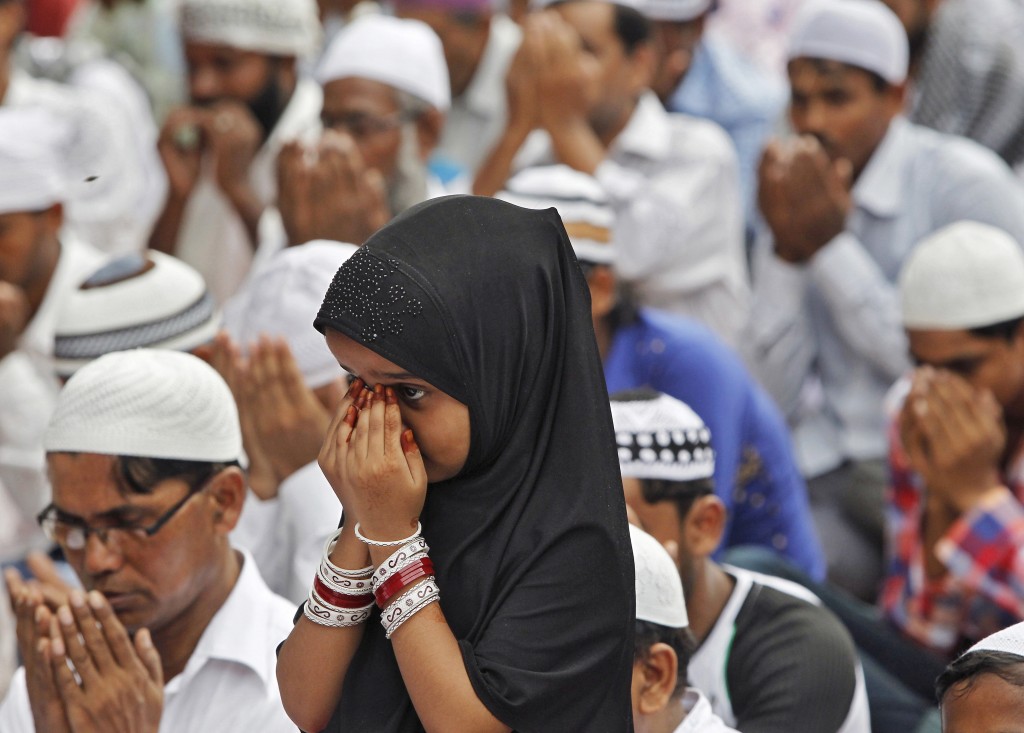 A Muslim girl offers prayers on the occasion of Eid al-Fitr in Chandigarh, India on July 18, 2015. Photo by Ajay Verma/Reuters 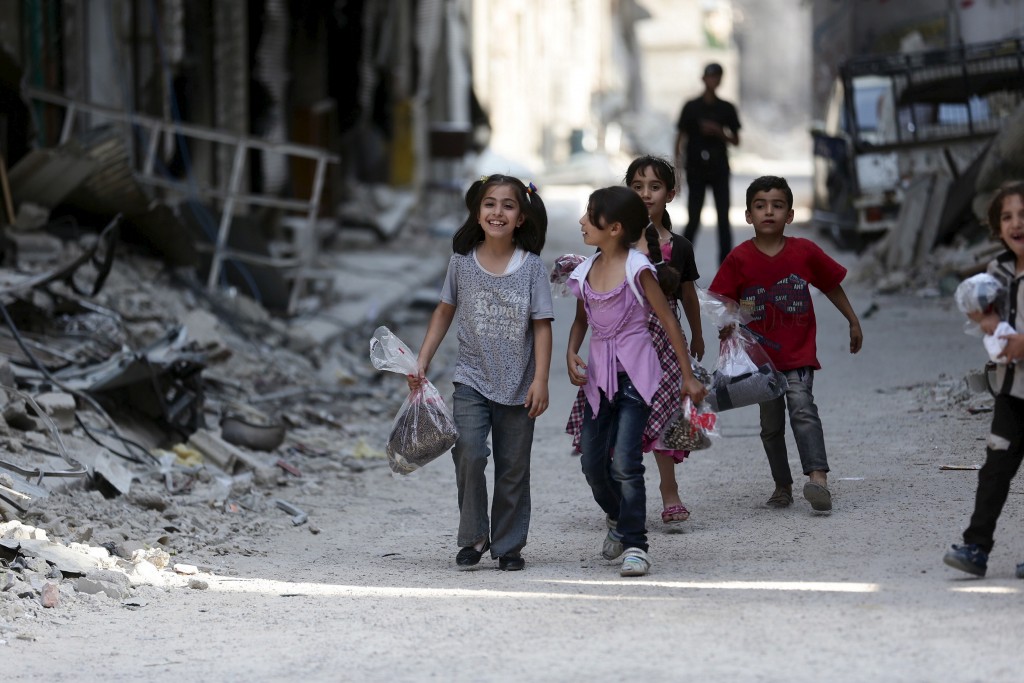 Children carry bags of new clothes days before Eid al-Fitr in Jobar, a suburb of Damascus, Syria on July 15, 2015. Photo by Bassam Khabieh/Reuters 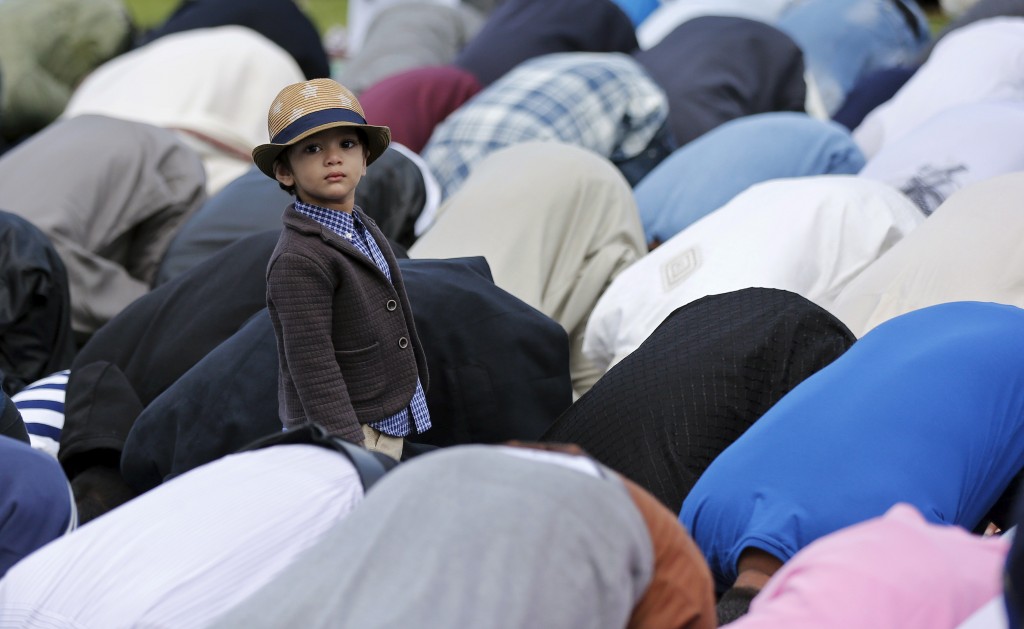 A young Muslim boy stands up as men perform prayers for Eid al-Fitr to mark the end of the holy fasting month of Ramadan at a park in London, on July 17, 2015. Photo by Suzanne Plunkett/Reuters

In most Muslim countries, the entire three day period of Eid al-Fitr is recognized as an official national holiday. People are excused from work and school to participate in festivities. New York City recently recognized the Muslim holiday in its public schools as well. 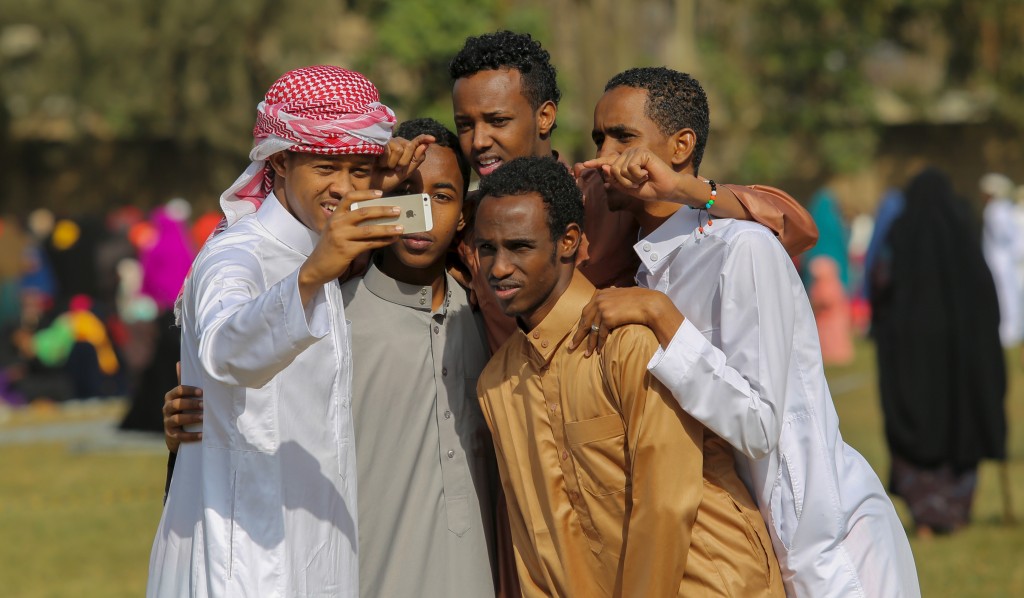 Muslims take a selfie after attending morning prayers to celebrate the first day of the Muslim holiday of Eid al-Fitr at the Eastleigh High School in a suburb of Nairobi, July 17, 2015. Photo by Boniface Mwangi/Reuters