HONG KONG (AP) — Frustration among protesters in Hong Kong boiled over Monday, with one group attacking the legislative building and tens of thousands of others marching through the city to demand expanded democracy on the 22nd anniversary of the former British colony’s return to China.

Black-clad protesters wearing hard hats and face masks smashed a large hole through the bottom of a floor-to-ceiling window at the legislature in the early afternoon. 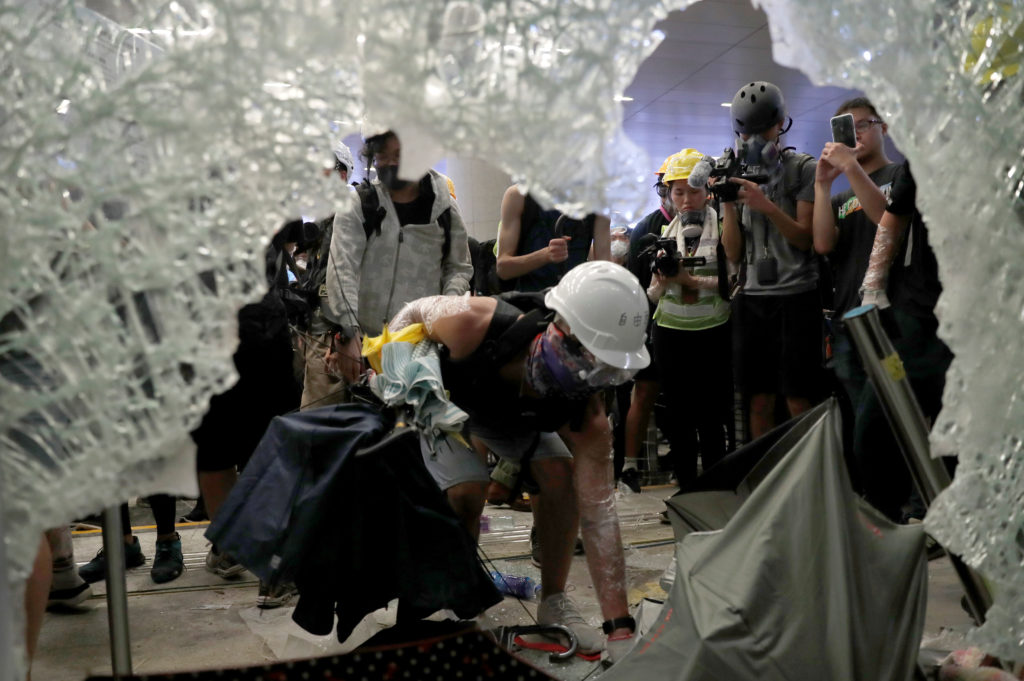 Protesters break into the Legislative Council building during the anniversary of Hong Kong’s handover to China in Hong Kong on July 1, 2019. Photo by Tyrone Siu/Reuters

They repeatedly rammed a cargo cart and large poles into the glass while police with riot shields lined up inside to prevent anyone from entering. Officers grabbed the cart after it became wedged in the broken glass and repelled the protesters with pepper spray. 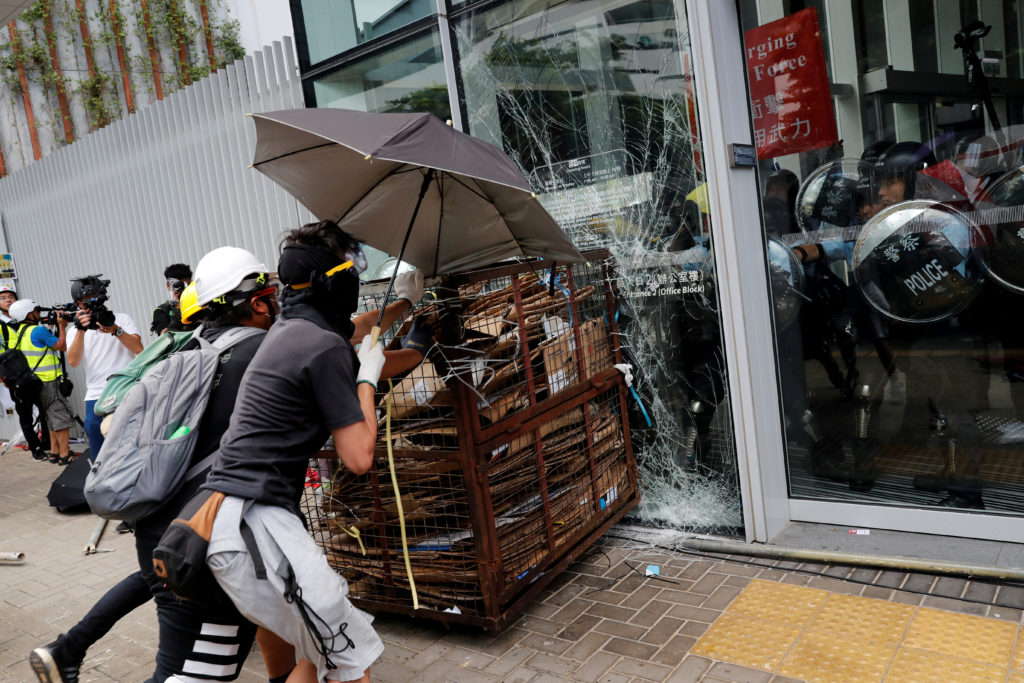 Protesters try to break into the Legislative Council building where riot police are seen, during the anniversary of Hong Kong’s handover to China in Hong Kong on July 1, 2019. Photo by Tyrone Siu/Reuters 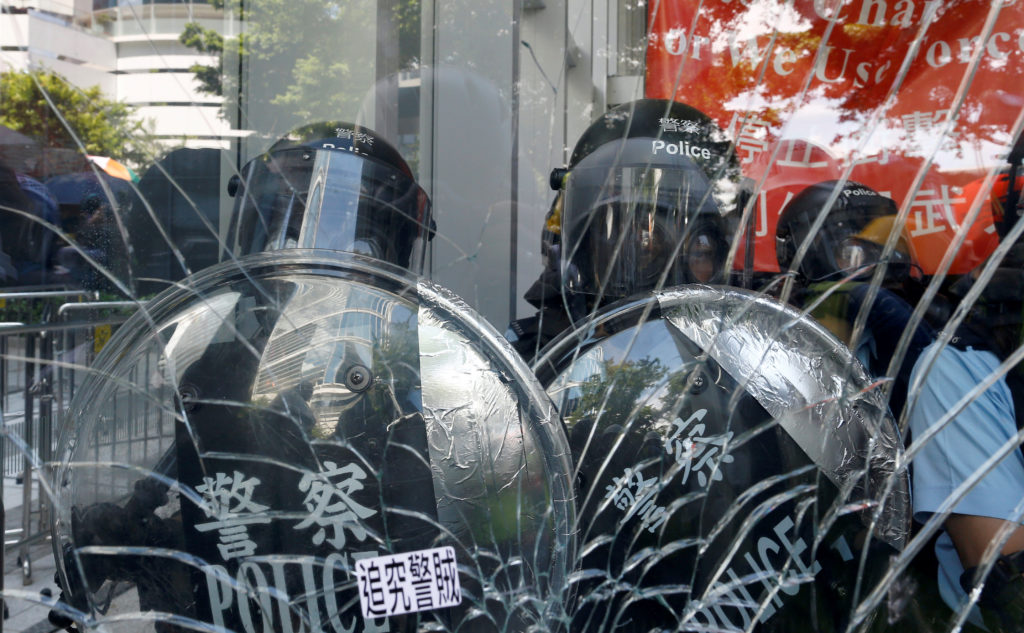 Riot police is seen inside the Legislative Council building where protesters try to break into, during the anniversary of Hong Kong’s handover to China in Hong Kong on July 1, 2019. Photo by Thomas Peter/Reuters

The actions prompted march organizers to change the endpoint of their protest from the legislature to a nearby park, after police asked them to either call it off or change the route. Police wanted the march to end earlier in the Wan Chai district, but organizers said that would leave out many people who planned to join the march along the way.

Hong Kong has been wracked by weeks of protests over a government attempt to change extradition laws to allow suspects to be sent to China to face trial. The proposed legislation, on which debate has been suspended indefinitely, increased fears of eroding freedoms in the territory, which Britain returned to China on July 1, 1997. 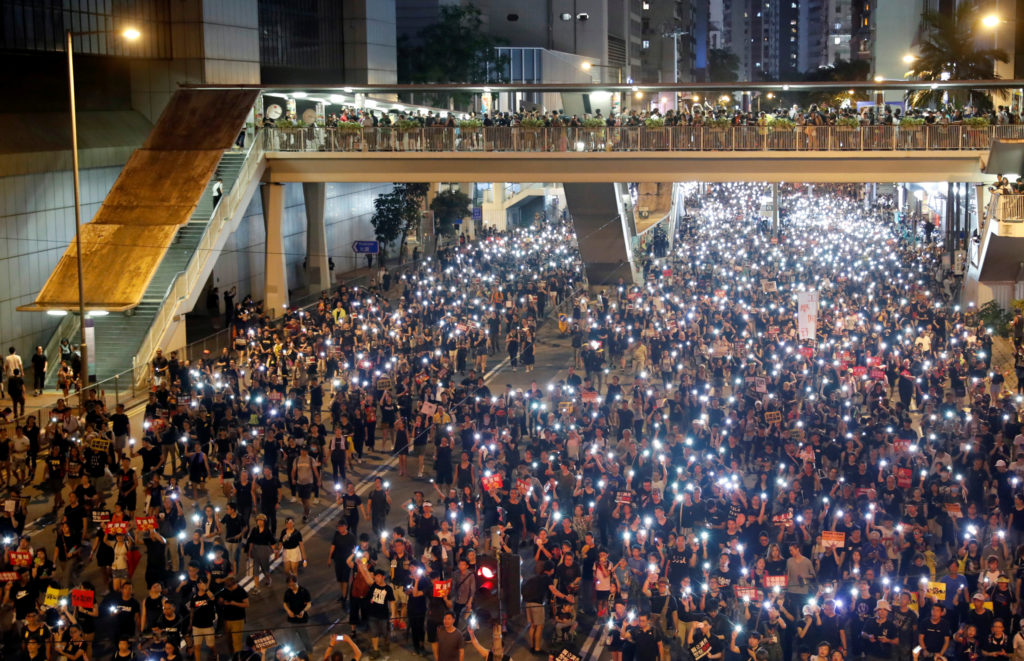 Anti-extradition bill protesters use the flashlights from their phones as they march during the anniversary of Hong Kong’s handover to China. Photo taken on July 1, 2019. Photo by Tyrone Siu/Reuters

Lam, who has come under withering criticism for trying to push the legislation through, pledged to be more responsive to public sentiment but has not responded directly to protesters’ demands.

In an address after a flag-raising ceremony marking the anniversary of the handover, Lam said the protests and two marches that attracted hundreds of thousands of participants have taught her that she needs to listen better to youth and people in general.

“This has made me fully realize that I, as a politician, have to remind myself all the time of the need to grasp public sentiments accurately,” she told the gathering in the city’s cavernous convention center.

She insisted her government has good intentions, but said “I will learn the lesson and ensure that the government’s future work will be closer and more responsive to the aspirations, sentiments and opinions of the community.” 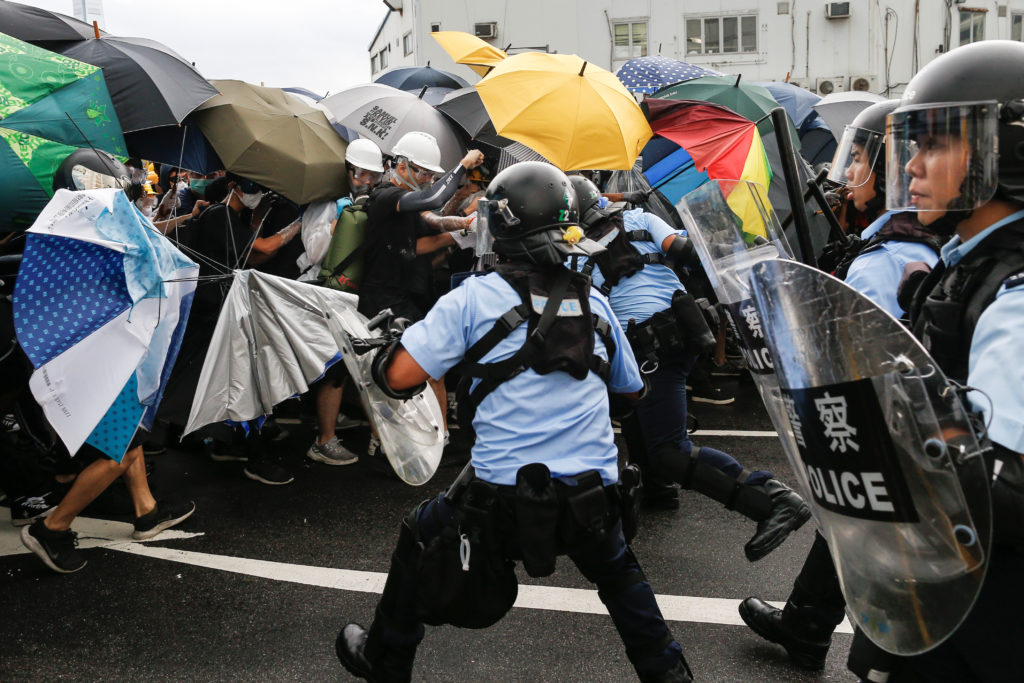 Police try to disperse protesters near a flag raising ceremony for the anniversary of Hong Kong handover to China. Photo by Thomas Peter/Reuters

Security guards pushed pro-democracy lawmaker Helena Wong out of the room as she shouted at Lam to resign and withdraw the “evil” legislation. She later told reporters she was voicing the grievances and opinions of the protesters, who could not get into the event.

The extradition bill controversy has given fresh momentum to Hong Kong’s pro-democracy opposition movement, awakening broader concerns that China is chipping away at the rights guaranteed to Hong Kong for 50 years under a “one country, two systems” framework. The two marches in June drew more than a million people, according to organizer estimates.

Jimmy Sham, a leader of the pro-democracy group that organized the march, told the crowd that Lam had not responded to their demands because she is not democratically elected. The leader of Hong Kong is chosen by a committee dominated by pro-China elites.

“We know that Carrie Lam can be so arrogant,” Sham said, rallying the crowd under a blazing sun before the start of the march at Victoria Park. “She is protected by our flawed system.”

The protesters are also demanding an independent inquiry into police actions during a June 12 protest, when officers used tear gas and rubber bullets to disperse a demonstration that blocked the legislature on the day that debate on the bill had been scheduled to resume.

The police say the use of force was justified, but since then have largely adopted softer tactics, even as protesters besieged police headquarters in recent days, pelting it with eggs and spray-painting slogans on its outer walls. 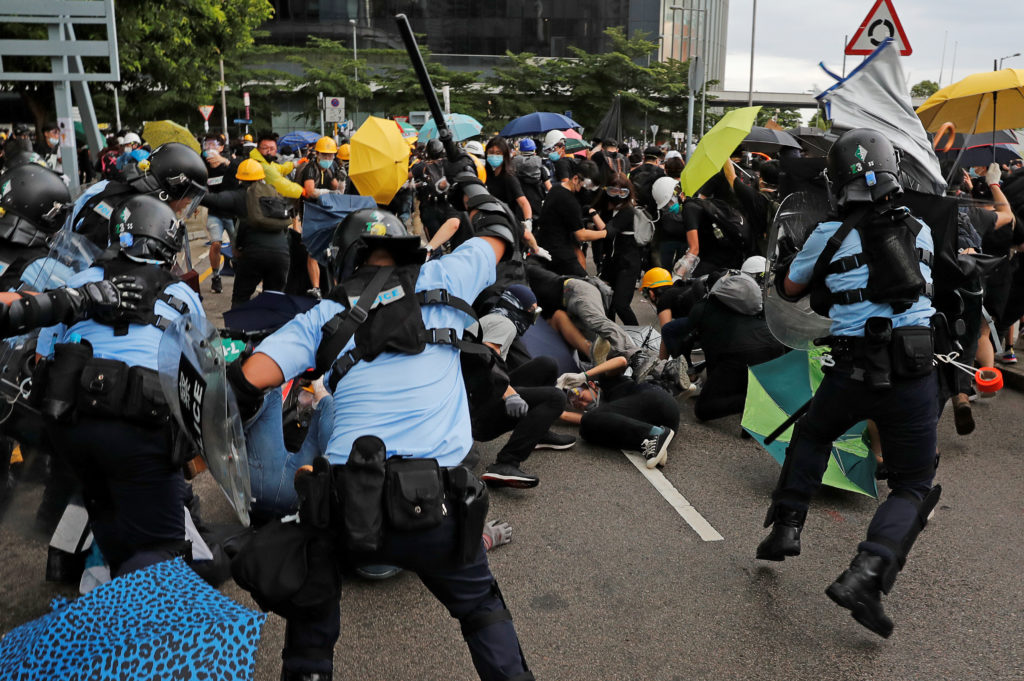 Riot police try to disperse protesters on the anniversary of Hong Kong’s handover to China in Hong Kong. Photo by Tyrone Siu/Reuters

The area around Golden Bauhinia Square, where the flag-raising ceremony took place, was blocked off from Saturday to prevent protesters from gathering to disrupt it. Before the morning ceremony, protesters trying to force their way to the square were driven back by officers with plastic shields and batons, the retreating protesters pointing open umbrellas to ward off pepper spray.

“We are horrified, this is our obligation to do this, we are protecting our home,” said Jack, a 26-year-old office worker who would only give his first name. “I don’t know why the government is harming us. It’s harming the rule of law. The rule of law is the last firewall between us and the Chinese Communist Party.”

The extradition legislation has drawn opposition from the legal profession, commercial groups and foreign nations, reflecting Hong Kong’s status as an international business center with a strong independent judiciary and high degree of transparency. 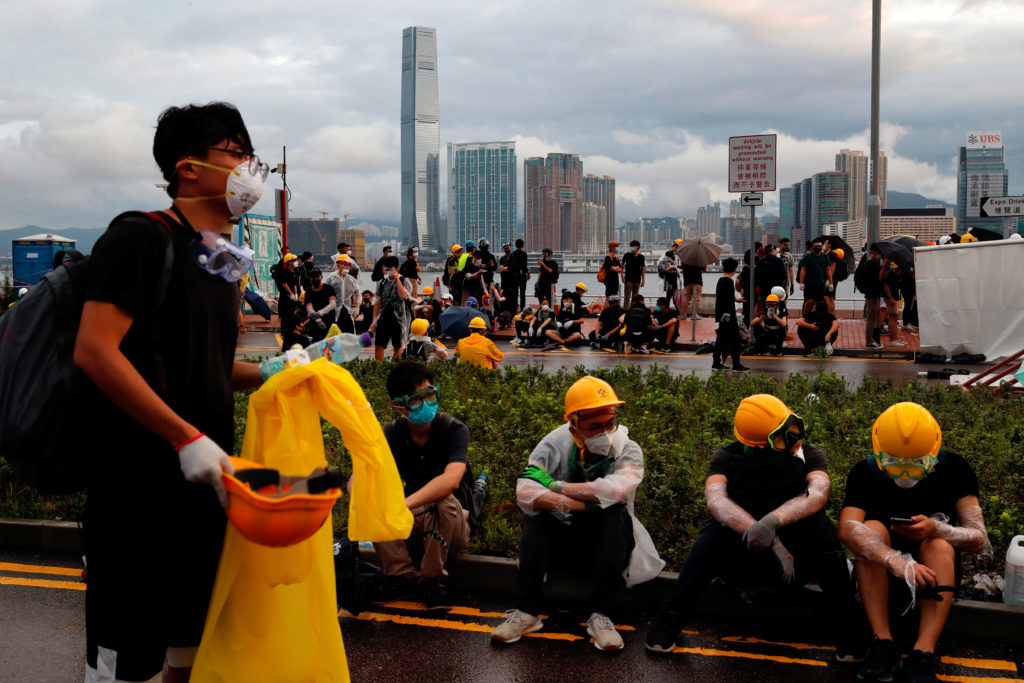 Anti-extradition bill protesters wear helmets during a demonstration near a flag raising ceremony for the anniversary of Hong Kong handover to China in Hong Kong. Photo by Tyrone Siu/Reuters

During a brief visit to Mongolia on Monday, U.S. National Security Adviser John Bolton said Washington expects “China like every other country to adhere to its international obligations” regarding Hong Kong.

China rejects all such statements as foreign interference. In Beijing, Chinese foreign ministry spokesman Geng Shuang told reporters at a daily briefing that “Hong Kong affairs are purely China’s internal affairs, and no foreign country has the right to intervene.”

Left: Protesters try to break into the Legislative Council building where riot police are seen, during the anniversary of Hong Kong's handover to China in Hong Kong on July 1, 2019. Photo by Tyrone Siu/Reuters