MADRID — Marches and protests are being held Friday across the globe to mark International Women’s Day under the slogan #BalanceforBetter, with calls for a more gender-balanced world.

The day, sponsored by the United Nations since 1975, celebrates women’s achievements and aims to further their rights. 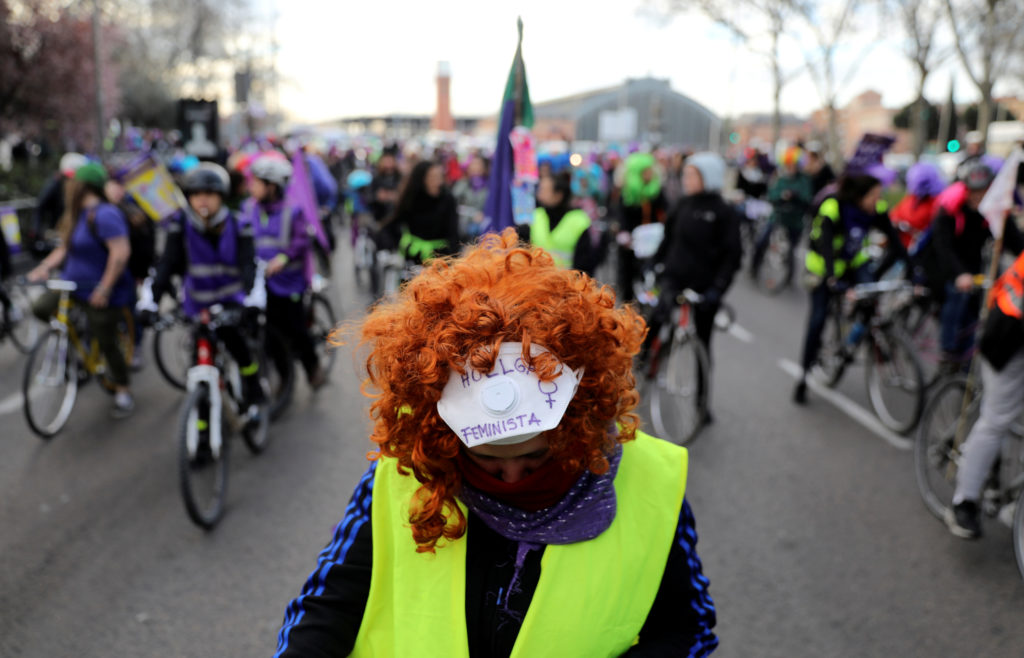 A woman wears a mask that reads “Feminist Strike” as she takes part in a bike protest during a nationwide feminist strike on International Women’s Day in Madrid, Spain. Photo by Sergio Perez/Reuters

Thousands of women walked off the job in Spain, joining millions more around the world demanding equality amid a persistent salary gap, violence and widespread inequality.

Women’s rights have become one of the hot topics in the run-up to a general election in Spain next month. Many female employees didn’t show up to work Friday. Others halted domestic work or left to men the care of children and ill or elderly people. 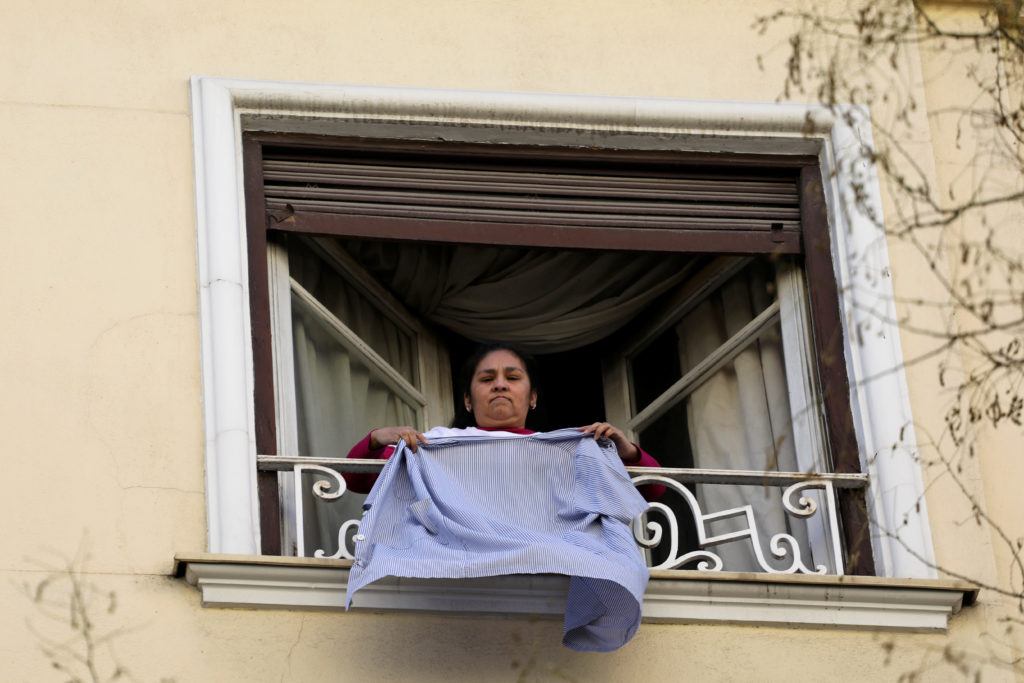 Sandra Delgadillo, a domestic worker from Bolivia, hangs her uniform in a balcony as she joins a nationwide feminist strike on International Women’s Day in Madrid, Spain. Photo by Sergio Perez/Reuters

In neighboring Portugal, the Cabinet observed a minute of silence Thursday as part of a day of national mourning it decreed for victims of domestic violence. Portuguese police say 12 women have died this year in domestic violence incidents — the highest number over the same period in 10 years.

In France, the first Simone Veil prize went Friday to a Cameroonian activist who has worked against forced marriages and other violence against girls and women.

Aissa Doumara Ngatansou was married against her will at age 15 but insisted upon continuing her studies as a young wife. She has since turned her attention to victims of Boko Haram extremists.

The French award is named for the trailblazing French politician and Holocaust survivor Veil, who spearheaded the fight to legalize abortion. 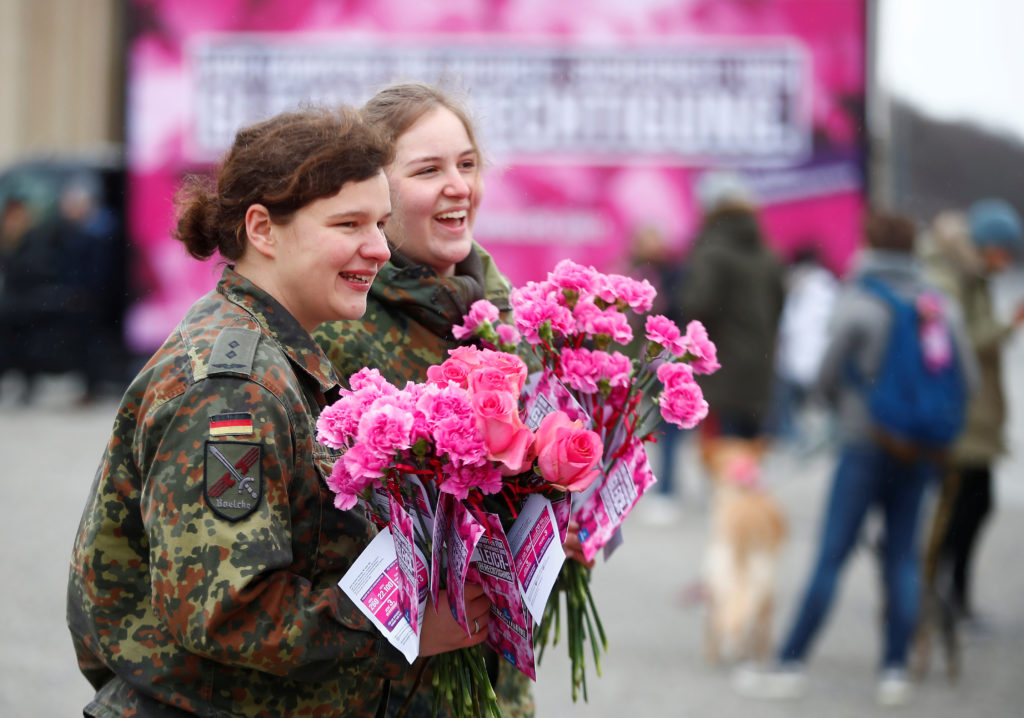 Female soldiers of the German Armed Forces (Bundeswehr) distribute flowers to women during the International Women’s Day near the Brandenburg Gate in Berlin, Germany. Photo by Hannibal Hanschke/Reuters

Meanwhile in Russia, International Women’s Day is a public holiday but it mostly lauds gender roles that are now outdated. As is his custom every year, President Vladimir Putin gave a speech thanking women for their patience, good grace and support.

“You manage to do everything: both at work and at home and at the same time you remain beautiful, charismatic, charming, the center of gravity for the whole family, uniting it with your love,” Putin said.

In Turkey, four female members of Turkey’s gendarmerie units found an unusual way of marking the day: rappelling down from Istanbul’s 15 July Martyrs’ Bridge connecting the city’s European and Asian sides and into the waters of the iconic Bosporus. 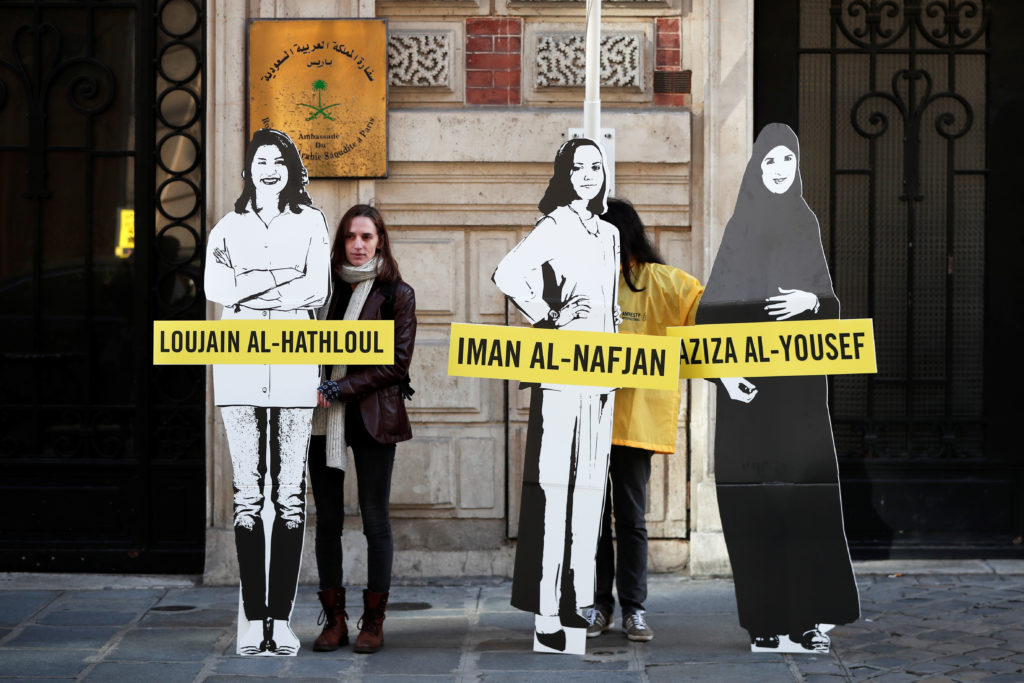 In India, hundreds of women marched on the streets of New Delhi demanding an end to domestic violence, sexual attacks and discrimination in jobs.

Boys are prized more than girls in India. Thousands of Indian women are killed — often doused in gasoline and burned to death — every year because the groom or his family feel the dowry she brought to the wedding was inadequate. 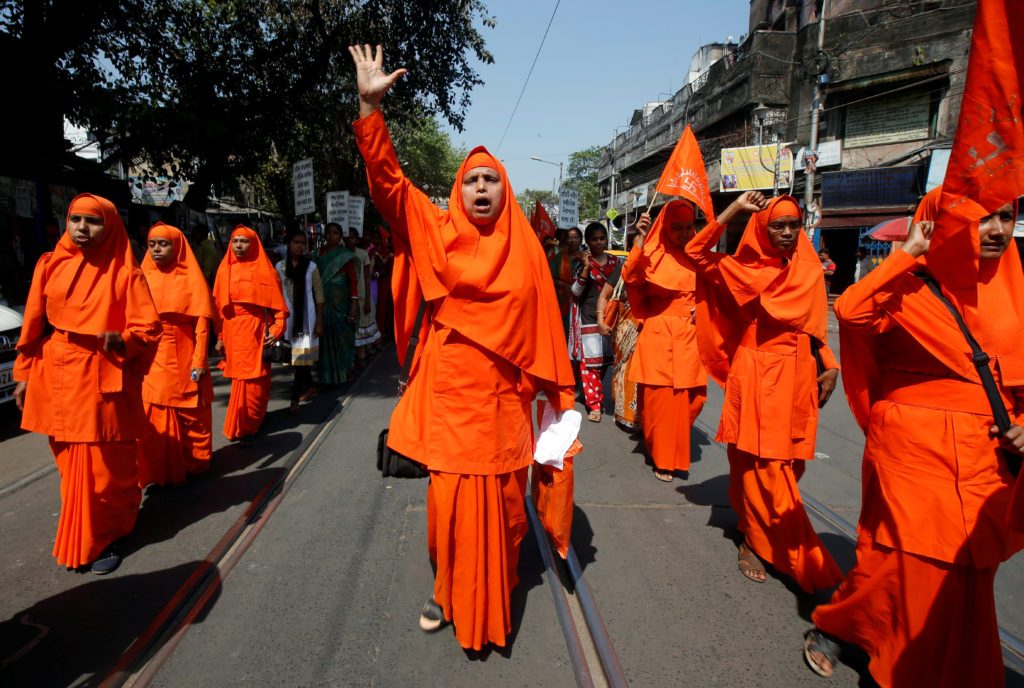 Political parties in India have for years been promising 33 percent of seats for women in the country’s Parliament, but they have yet to enact legislation to that effect.

In Indonesia’s capital Jakarta, several hundred men and women carried colorful placards calling for an end to discriminative practices such as the termination of employment for pregnancy and exploitative work contracts.

“Our action today is to urge (the government) for our right to a society that’s democratic, prosperous, equal and free from violence,” said Dian Trisnanti, a labor activist. Girls and women in Indonesia, the world’s fourth most populous country, have equal access to education but face higher unemployment, lower wages and poorer working conditions than men. 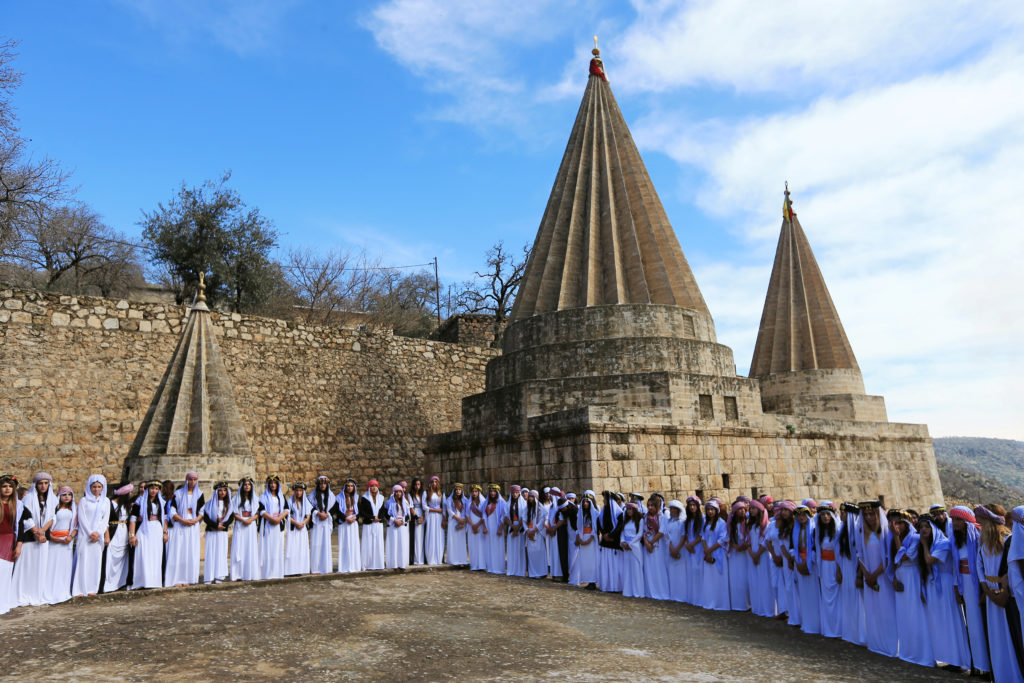 On the International Women’s Day in Shikhan, north of Iraq, Yazidi women attend a ceremony at Lilash Temple to commemorate the death of women who were killed by Islamic State militants. Photo by Ari Jalal/Reuters

Both Koreas marked the day. In the South, women wearing black cloaks and pointed hats marched against what they describe as a “witch hunt” of feminists in a deeply conservative society.

College student Noh Seo-young said that South Korea struggles to accept that women are “also humans” and that women have to fight until they can “walk around safely.”

In the North, where Women’s Day is one of the few national holidays that is not explicitly political in nature, people dressed up for family photo shoots or bought roses for their mothers or wives at the many small, bright orange street stalls in central Pyongyang that sell flowers. The stalls normally do most of their business selling flowers to be placed at the feet of statues to the country’s leaders.

In the Philippines, hundreds of women in purple shirts used a noisy march and protest in Manila to call for the ouster of President Rodrigo Duterte, whom they rebuked for the often sexist jokes he cracks and authoritarian moves they say are threatening one of Asia’s liveliest democracies.

They toppled an ugly head effigy of Duterte from atop paper blocks with slogans depicting him as an American lapdog. 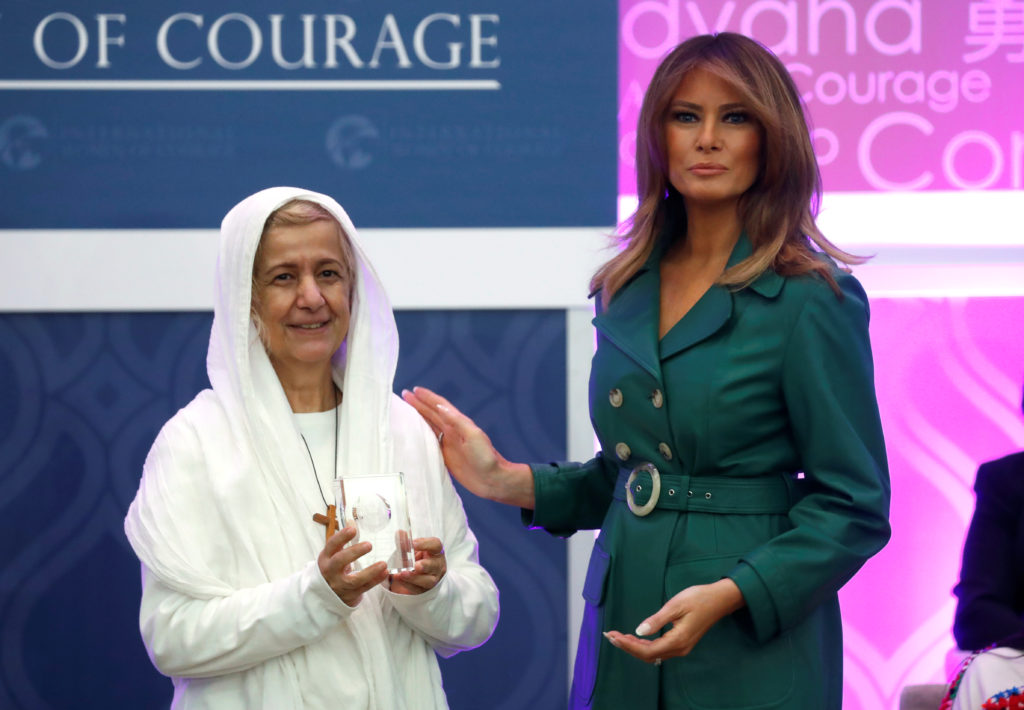 First lady Melania Trump presents an award to Mama Maggie of Egypt during the International Women of Courage (IWOC) celebration at the State Department in Washington. Photo by Kevin Lamarque/Reuters

On the eve of International Women’s Day, U.S. first lady Melania Trump saluted women from 10 countries for their courage.

“Courage is what divides those who only talk about change from those who actually act to change,” Mrs. Trump said at a ceremony Thursday that was also attended by Secretary of State Mike Pompeo.

Pompeo separately recognized women in Iran for protesting the requirement that they wear a head covering known as a hijab in public and a Ukrainian activist who died in 2018 after she was attacked with sulfuric acid. 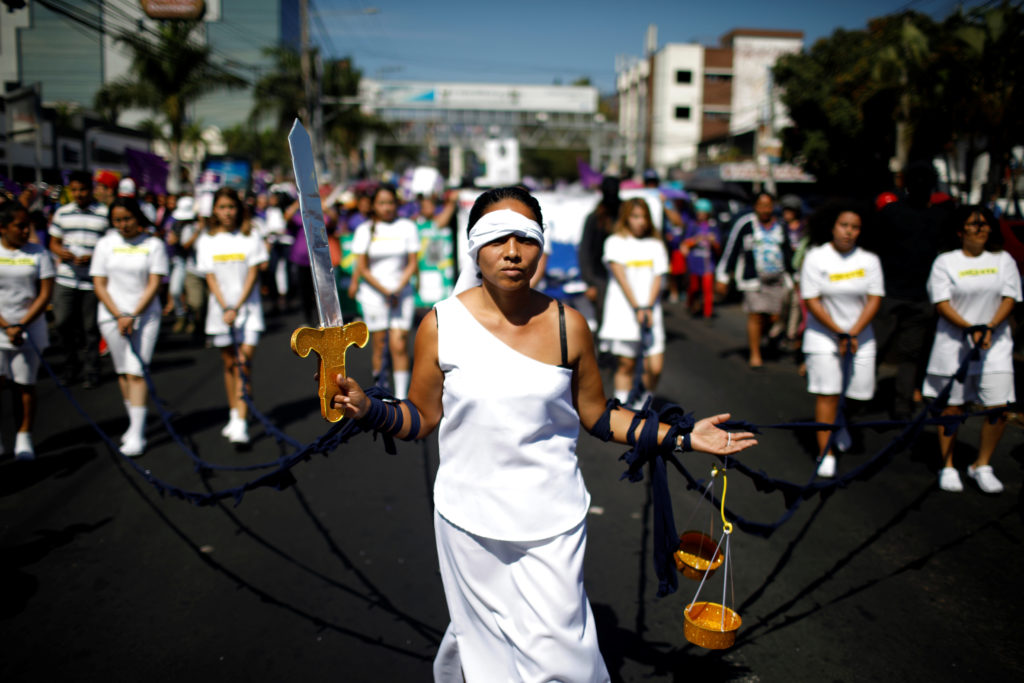 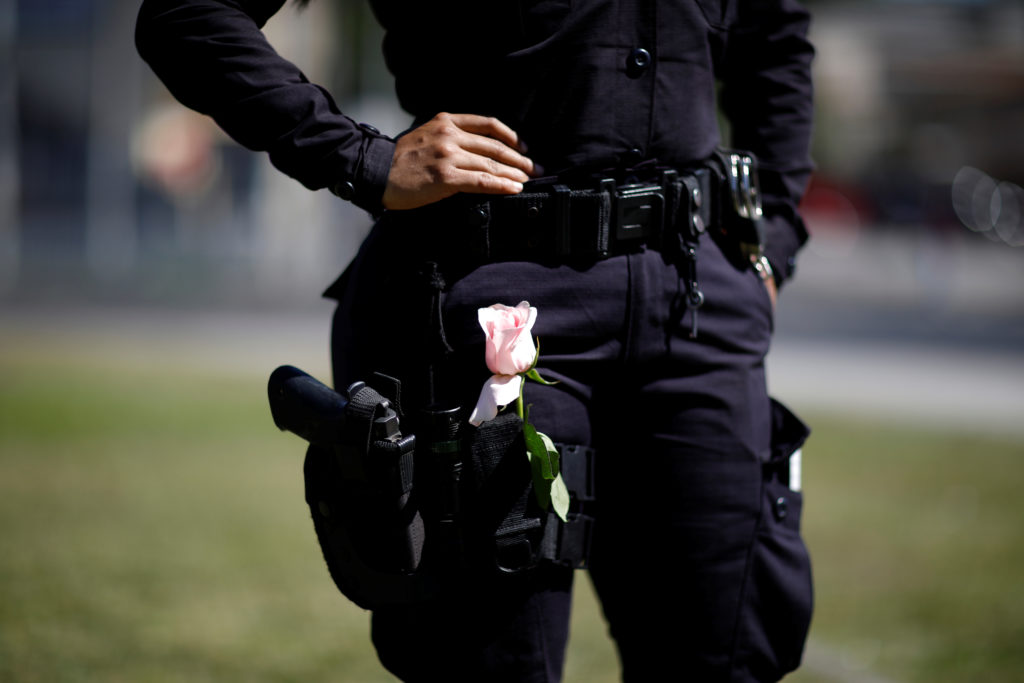 Ethiopian Prime Minister Abiy Ahmed, who named one of the world’s few “gender-balanced” Cabinets last year, told a gathering that “women are the pillars of the nation and the least recognized for their sacrifices.”

In Nigeria, the U.S. Embassy hosted talks on sexual harassment that included a founder of the recent #ArewaMeToo campaign among women in the country’s conservative, largely Muslim north. And in Niger, first lady Aissata Issoufou Mahamadou oversaw the awards in the Miss Intellect Niger contest.

“We haven’t gotten to a stage where women are comfortable to come out and say, ‘I was sexually abused,'” said protester Esther Passaris. “So what we need to do is slowly, slowly grow.”

AP reporters across the globe contributed to this report. Hatton reported from Lisbon, Portugal.