The first-ever red alert for smog was issued in Beijing Monday. Schools were encouraged to close and restrictions were applied to factories and traffic.

A red alert is issued when officials anticipate three or more consecutive days of extreme smog.

This is not China’s first red alert of the year. The northeastern Chinese city of Shenyang experienced red-alert level smog Nov. 8, as winter approached and people began burning coal to heat their homes. 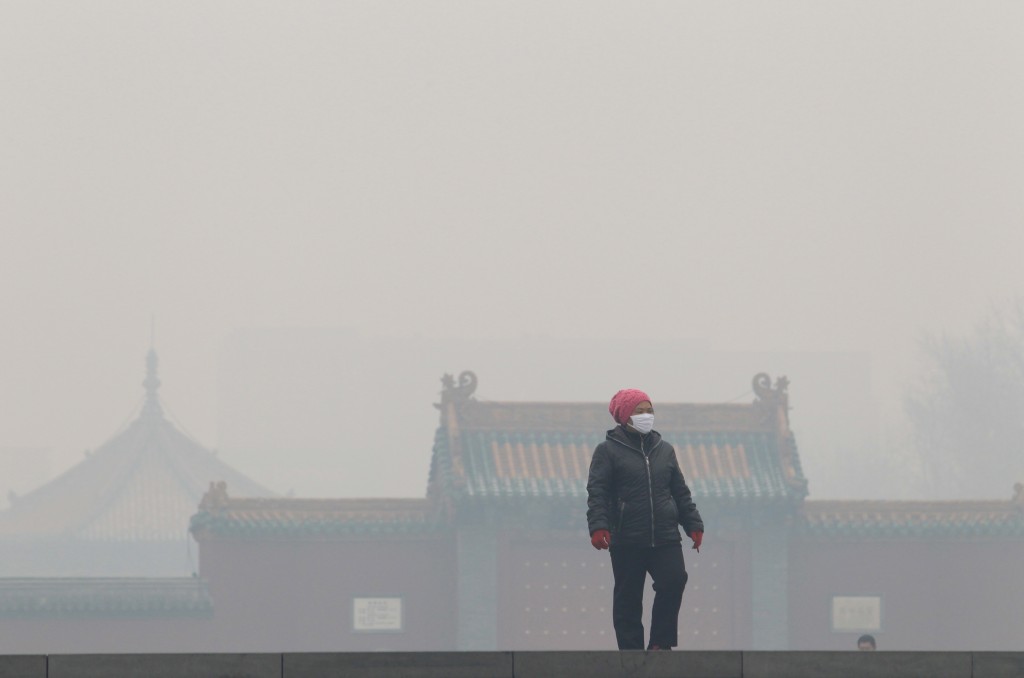 A woman wearing a mask walks outside the old palace museum on a hazy day in Shenyang, Liaoning province, Nov. 8, 2015. Photo by Reuters

The Shenyang Environmental Protection Agency reported in November levels of the poisonous airborne matter PM2.5 reaching higher than 1,000 micrograms per cubic meter. Safe levels of PM2.5 particles are 25 micrograms or less per cubic meter, according to the World Health Organization. According to the U.S. EPA, PM2.5 is a result of combustion activity, from vehicles or power plants, for example, and certain industrial processes.

An orange alert, used when PM2.5 particles surpasses 600 micrograms per cubic meter, was issued earlier this month in Beijing. It was the first alert of its kind in almost two years. 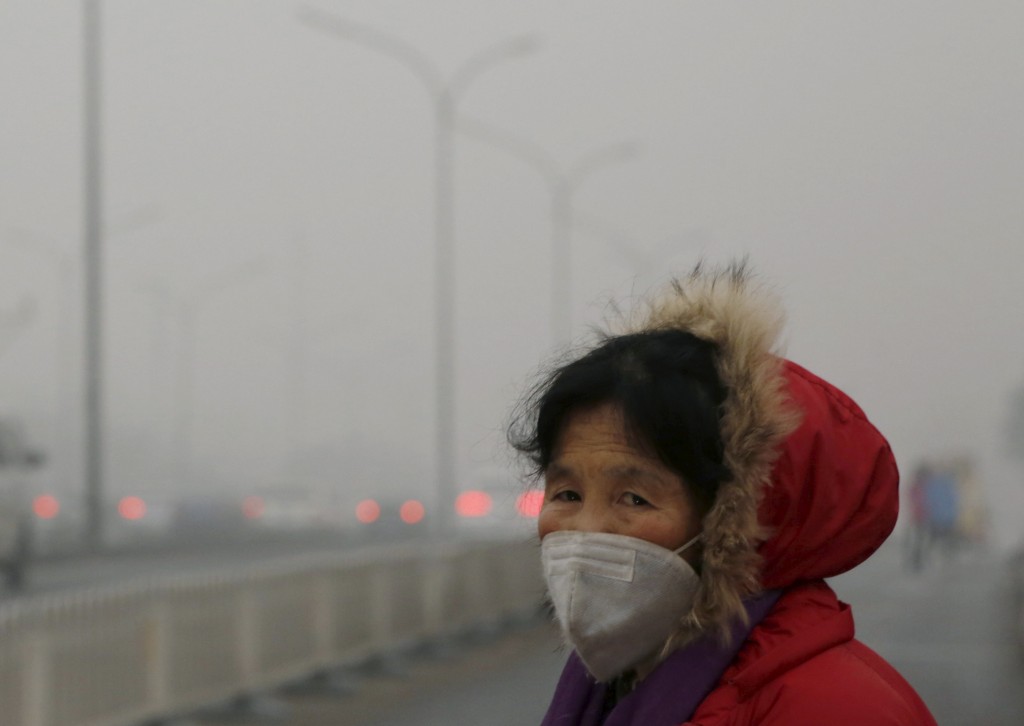 A woman wearing a protective mask makes her way on an extremely polluted day as hazardous, choking smog continues to blanket Beijing, on Dec. 1. Photo by Kim Kyung-Hoon/Reuters

China’s pollution problem made international headlines before and during the 2008 summer olympics in Beijing. Four members of the U.S. cycling team wore smog masks upon arrival to the city. The United States Olympic Committee’s lead exercise physiologist, Randy Wilber, advised athletes to train away from Beijing until just before their events. Beijing is set to host the 2022 Winter Olympics. 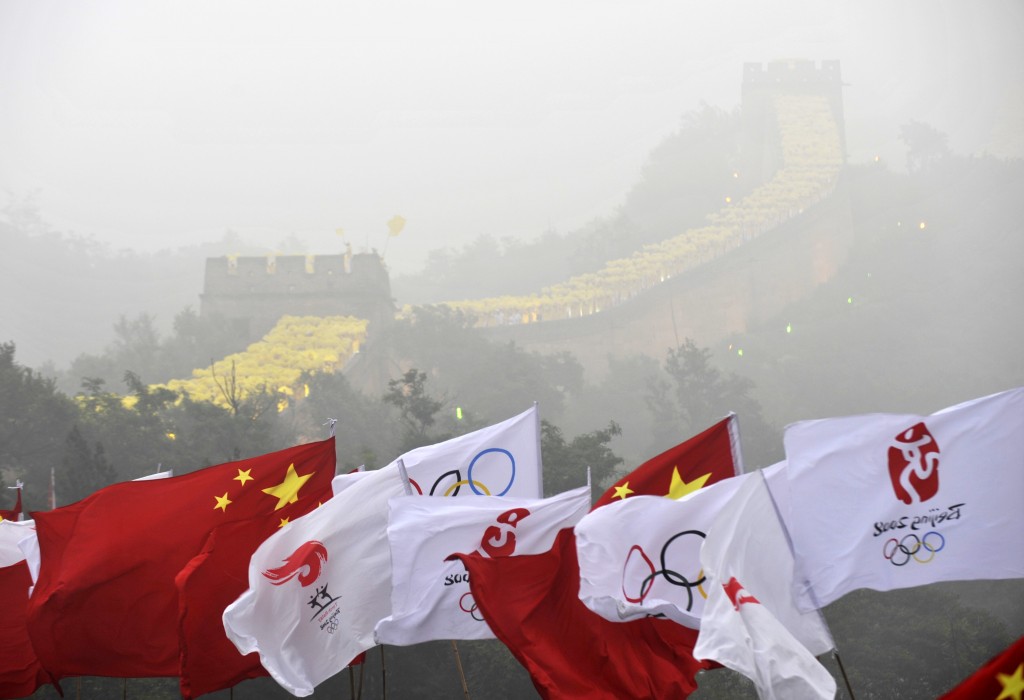 Performers wait for the 2008 Beijing Olympic torch relay at the Badaling section of the Great Wall on the outskirts of Beijing Aug. 7, 2008. Photo by Joe Chan/Reuters

About 1.6 million people in China die each year due to lung, heart, and stroke problems caused by China’s polluted air, according to physicists at the University of California, Berkeley. That’s about 4,000 people a day.

That could be because China depends on burning coal for 60 percent of its power, according to the Associated Press. But the most polluted city in the world isn’t in China, though; it is Dehli, India. 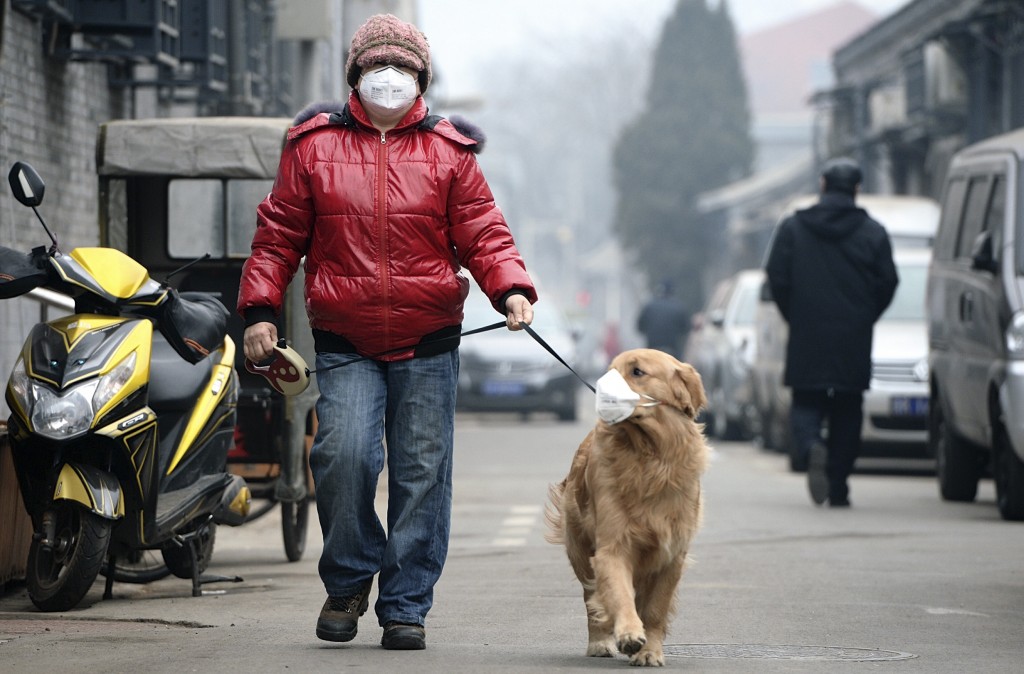 A man and his dog, both wearing masks, walk along a small alley on a hazy day in Beijing, Feb. 23, 2014. Beijing, under fire to take effective measures against air pollution, raised its four-tiered alert system to “orange” for the first time in 2014. Photo by Legal Evening/Liu Chang/Reuters 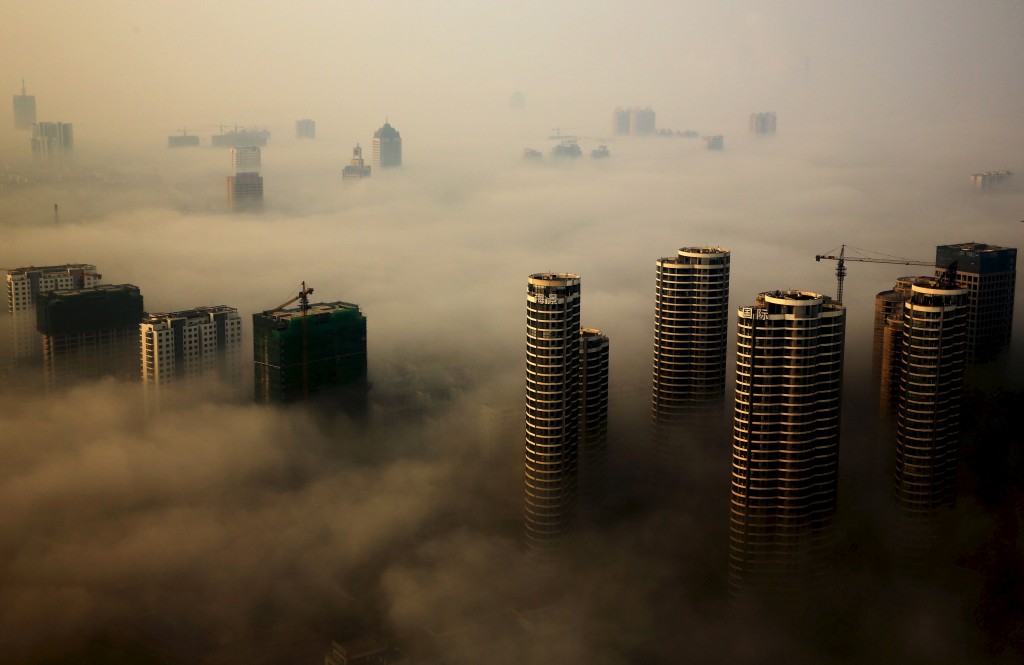 Buildings in construction are seen among mist during a hazy day in Rizhao, Shandong province, China, Oct. 18, 2015. Photo by Reuters 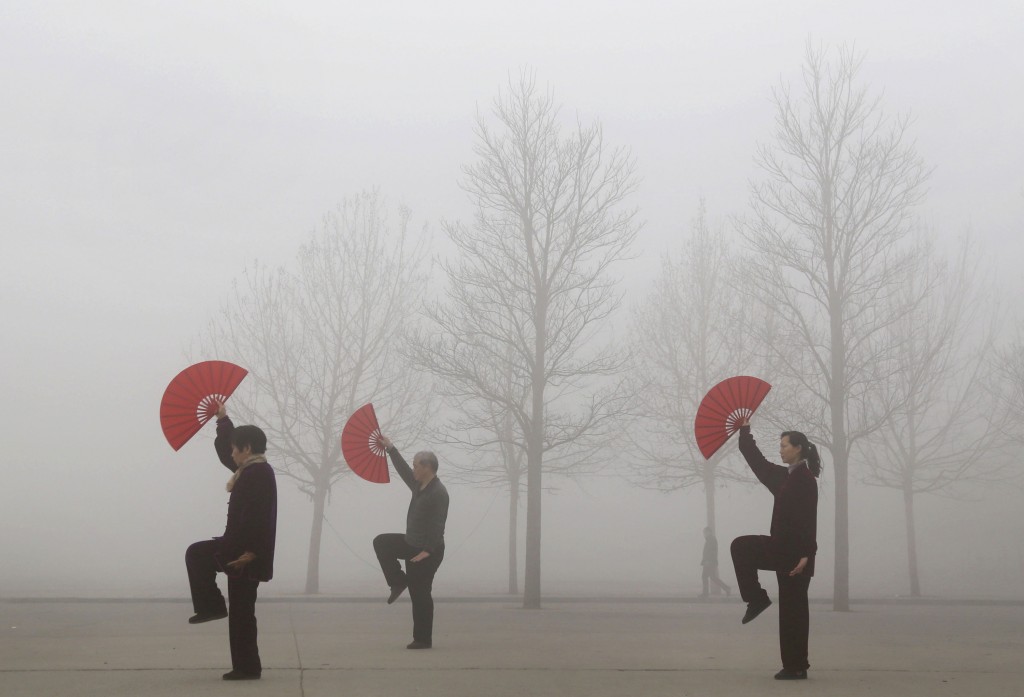 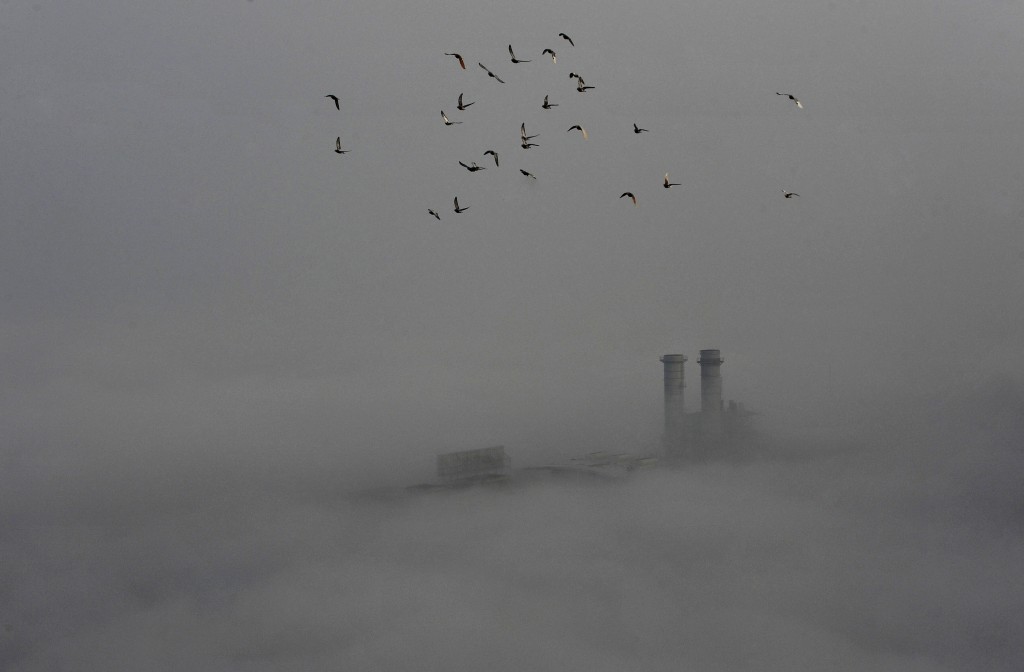 Birds fly across the sky on a polluted day in Wuhan, Hubei province, Feb. 16, 2015. Photo by Reuters 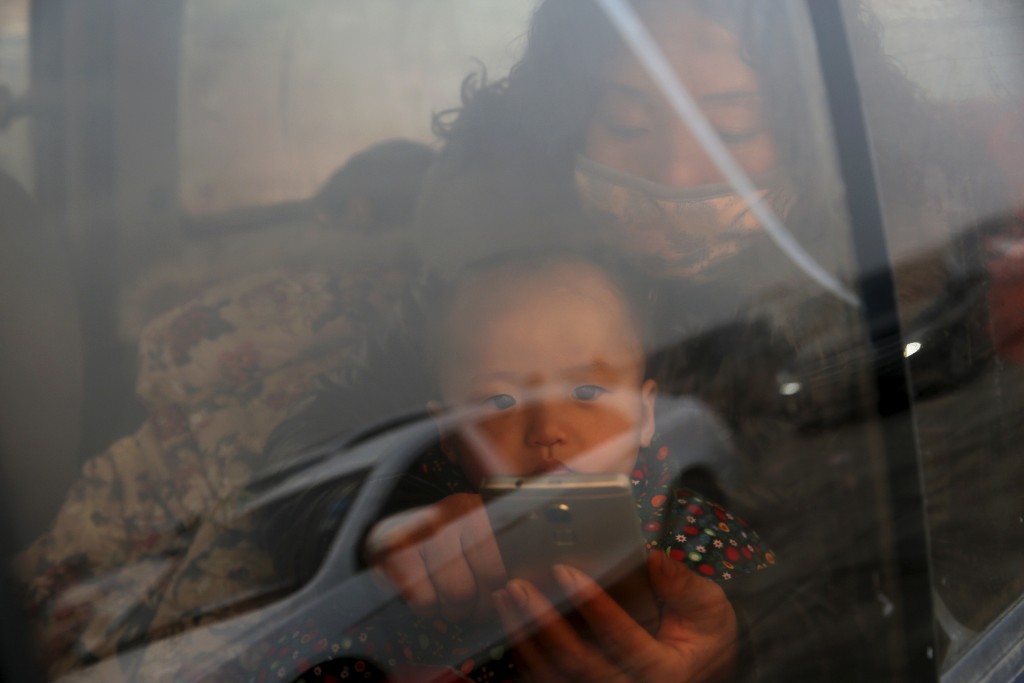 A baby is held inside a vehicle stranded on a highway between Beijing and Hebei province, China, that is closed due to smog on an extremely polluted day, Nov. 30, 2015. Photo by Damir Sagolj/Reuters 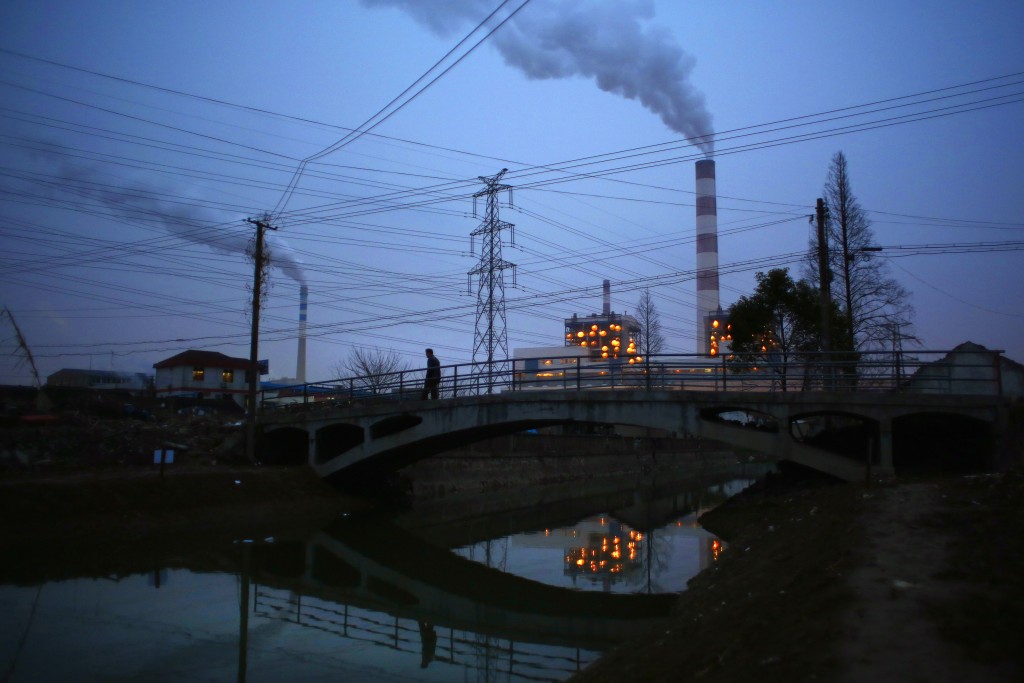 A man walks over a bridge as smoke rises from chimneys of a thermal power plant in Shanghai Feb. 23, 2015. Nearly 90 percent of China’s big cities failed to meet air quality standards in 2014. Photo by Carlos Barria/Reuters