SALALAH, Oman — A cyclone more powerful than any previously recorded in southern Oman slammed into the Gulf country and neighboring Yemen on Saturday, deluging a major city with nearly three years’ worth of rainfall in single day. The storm killed at least five people while more than 30 remain missing, officials said.

Rushing waters from the rain and storm surges flooded typically dry creek beds. The holiday destination’s now-empty tourist beaches were littered with debris and foam from the churning Arabian Sea.

Three people, including a 12-year-old girl, died in Oman, and another two bodies were recovered from the Yemeni island of Socotra. More than 30 people were still missing in Socotra, including Yemeni, Indian and Sudanese nationals.

Yemeni officials also reported damage in the country’s far east, along the border with Oman. Rageh Bakrit, the governor of al-Mahra province, said on his official Twitter account late Friday that strong winds had blown down houses and taken out communication lines and water services. He said there were no fatalities in the province.

India’s Meteorological Department said the storm packed maximum sustained winds of 170-180 kilometers (105-111 miles) per hour with gusts of up to 200 kph (124 mph). It called the cyclone “extremely severe.”

Portions of Salalah, home to some 200,000 people, lost power as the cyclone made landfall. 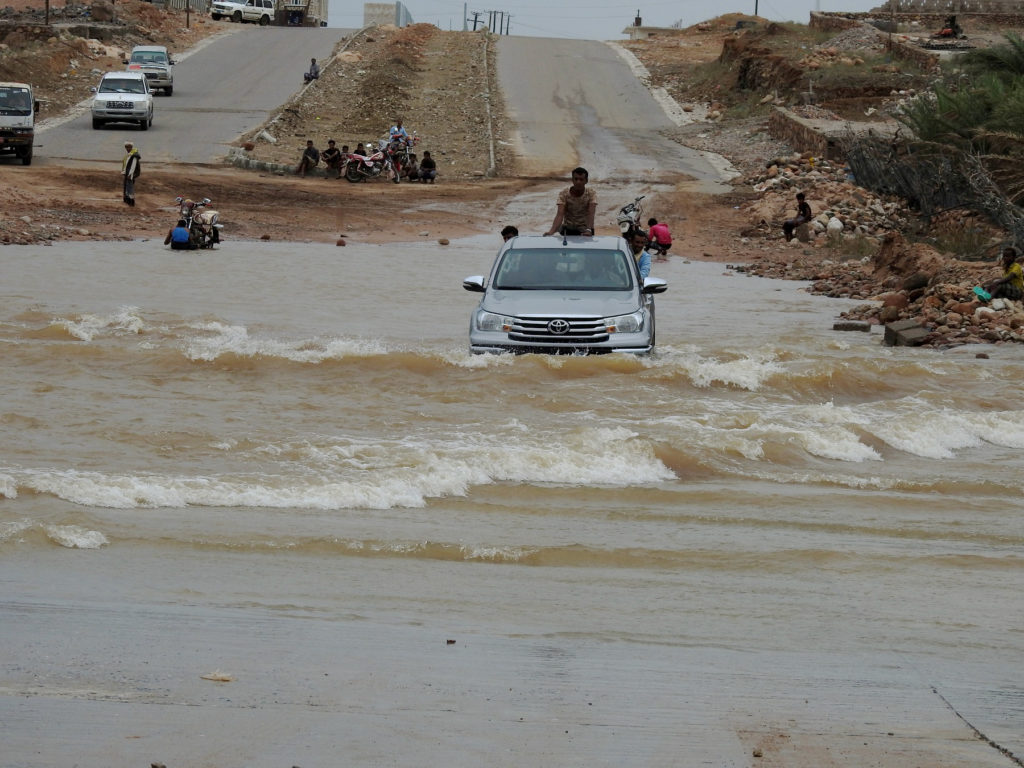 People ride on the back of a truck driving through a flooded road after Cyclone Mekunu hit Socotra Island, Yemen, May 25, 2018. Photo by Reuters.

Branches and leaves littered the streets. Several underpasses became standing lakes. Some cars were left abandoned on the road. Electrical workers began trying to repair lines in the city while police and soldiers in SUVs patrolled the streets. On the outskirts of the city, near the Salalah International Airport, what once was a dry creek bed had become a raging river.

The airport, closed since Thursday, will reopen early Sunday, Oman’s Public Authority for Civil Aviation said. The Port of Salalah — a key gateway for the country and for Qatar amid a regional diplomatic dispute — remained closed, its cranes secured against the pounding rain and winds.

Omani forecasters said Salalah and the surrounding area would get at least 200 millimeters (7.87 inches) of rain, over twice the city’s annual downfall. It actually received 278.2 mm, nearly three times its annual rainfall.

Authorities remained worried about flash flooding in the area’s valleys and potential mudslides down its nearby cloud-shrouded mountains. In nearby Wadi Darbat, the storm’s rains supercharged its famous waterfall.

Police and others continued their rescue efforts even as the winds and rains calmed. Capt. Tarek al-Shanfari of the Royal Oman Police’s public relations department said there had been at least three fatalities in the storm, including the death of a 12-year-old girl who was hit in the head by a door flung open by the wind.

An Asian laborer died in a flooded valley and an Omani national in a 4×4 died when his vehicle was swept away, al-Shanfari said. 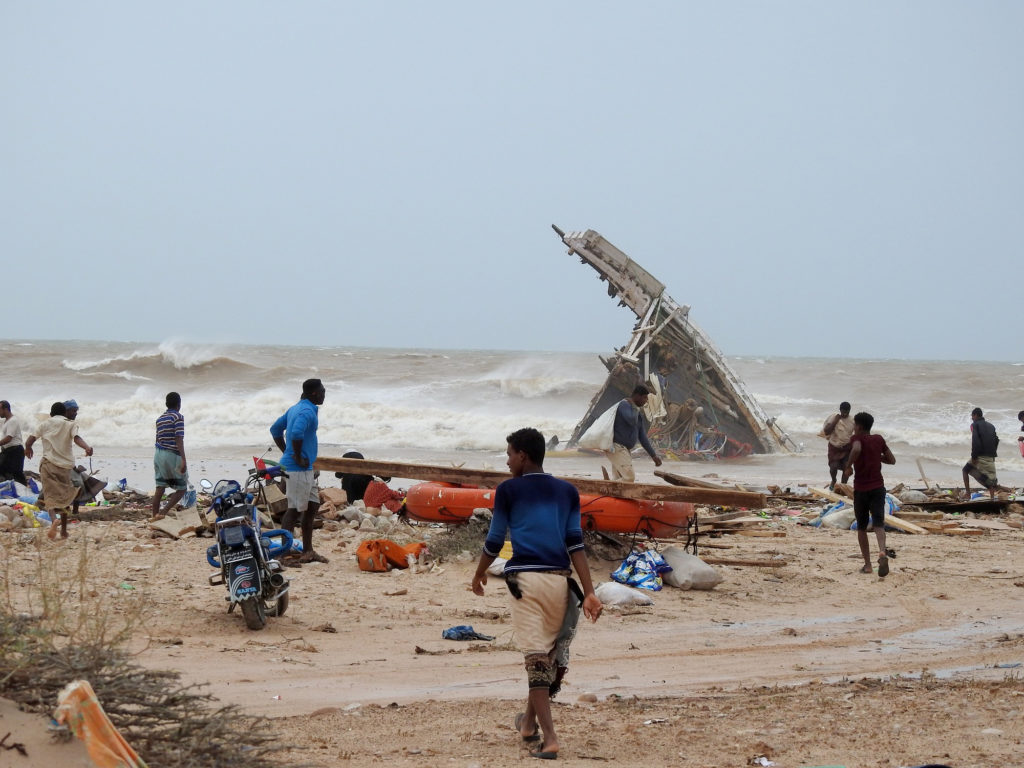 People search among the wreckage of a boat destroyed by Cyclone Mekunu in Socotra Island, Yemen, May 25, 2018. Photo by Reuters.

On Socotra, authorities relocated over 230 families to sturdier buildings and other areas, including those more inland and in the island’s mountains, Yemeni security officials said.

Yemeni security officials said rescuers recovered two bodies on Socotra, while more than 30 people remain missing. They spoke on condition of anonymity because they were not authorized to brief reporters.

The island, listed by UNESCO as a World Heritage Site, has been the focus of a dispute between the UAE and Yemen’s internationally recognized government, which are ostensibly allied against Shiite rebels known as Houthis.

Socotra has a unique ecosystem and is home to plants, snails and reptiles that can be found nowhere else.

In Oman, Mohammed Omer Baomer warned his neighbors about a torn-away chunk of road just down the street from his home after earlier getting his SUV stuck over it.

“It was a scary feeling, as if it was the end of world,” he said of the cyclone. “You can’t even go outside. You try to watch from the window and you can’t.”

Yet even as Mekunu barreled overhead, the eye of the storm provided a moment’s respite early Saturday morning. At one luxury hotel in Salalah, which already had evacuated its guests, workers sat down early for “suhoor,” a meal Muslims eat before sunrise during the holy fasting month of Ramadan. They laughed and shared plates by flashlight in a darkened ballroom, the cyclone’s wind a dull roar behind their clatter.

Left: People search among the wreckage of a boat destroyed by Cyclone Mekunu in Socotra Island, Yemen, May 25, 2018. Photo by Reuters.