President Obama pays tribute in Hiroshima: ‘We listen to a silent cry’

HIROSHIMA, Japan — President Barack Obama paid tribute Friday to the “silent cry” of the 140,000 victims of the atomic bomb dropped 71 years ago on Hiroshima, and called on the world to abandon “the logic of fear” that encourages the stockpiling of nuclear weapons.

Obama’s trip to Hiroshima made him the first U.S. president to visit the site of the world’s first atomic bomb attack, and he sought to walk a delicate line between honoring the dead, pushing his as-yet unrealized anti-nuclear vision and avoiding any sense of apology for an act many Americans see as a justified end to a brutal war that Japan started with a sneak attack at Pearl Harbor.

“Death fell from the sky and the world was changed,” Obama said, after laying a wreath, closing his eyes and briefly bowing his head before an arched stone monument in Hiroshima’s Peace Memorial Park that honors those killed on Aug. 6, 1945. “The flash of light and a wall of fire destroyed a city and demonstrated that mankind possessed the means to destroy itself.”

In a carefully choreographed display, Obama offered a somber reflection on the horrors of war and the danger of technology that gives humans the “capacity for unmatched destruction.”

With Japanese Prime Minister Shinzo Abe standing by his side and an iconic bombed-out domed building looming behind him, Obama urged the world to do better.

Obama hoped Hiroshima would someday be remembered not as the dawn of the atomic age but as the beginning of a “moral awakening.” He renewed his call for a world less threatened by danger of nuclear war. He received a Nobel Peace Prize early on in his presidency for his anti-nuclear agenda but has since seen uneven progress.

“Among those nations like my own that hold nuclear stockpiles, we must have the courage to escape the logic of fear and pursue a world without them,” Obama said. 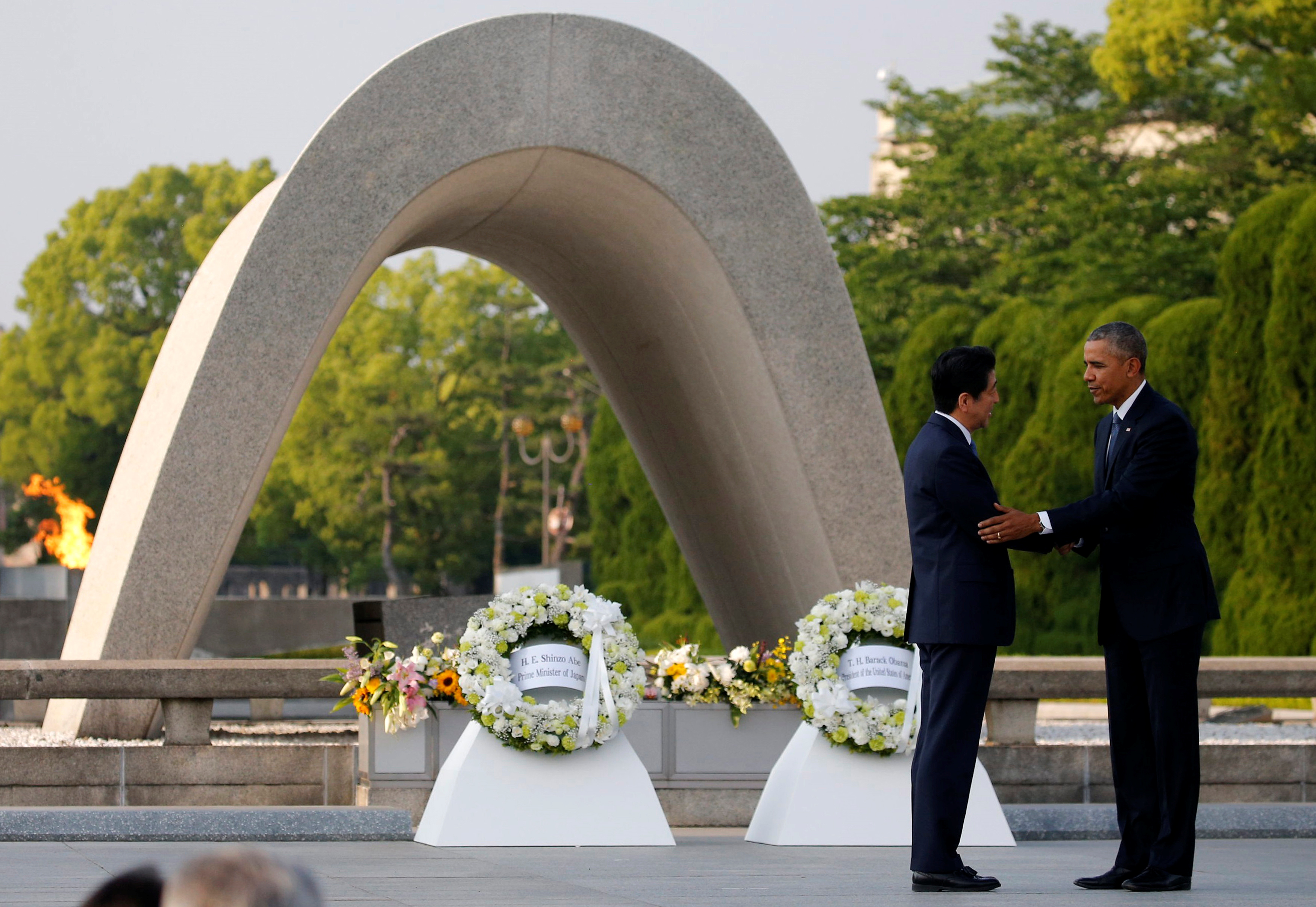 U.S. President Barack Obama puts his arm around Japanese Prime Minister Shinzo Abe after they laid wreaths in front of a cenotaph at Hiroshima Peace Memorial Park in Hiroshima, Japan on Friday. Photo by Carlos Barria/Reuters

Abe, in his speech, called Obama’s visit courageous and long-awaited. He said it would help the suffering of survivors and he echoed the anti-nuclear sentiments.

“At any place in world, this tragedy must not be repeated again,” Abe said.

Critics believe Obama’s mere presence in Hiroshima would be viewed as an apology for what they see as a bombing that was needed to stop a Japanese war machine that had brutalized Asia and killed many Americans. But Obama’s decision also drew praise from those who see it as a long overdue gesture for two allies ready to bury a troubled past.

Obama’s remarks showed a careful awareness of the sensitivities. He included both South Koreans and American prisoners of war in recounting the death toll at Hiroshima — a nod to advocates for both groups who publicly warned the president not to forget their dead.

Obama spoke broadly of the brutality of the war that begat the bombing — saying it “grew out of the same base instinct for domination or conquest that had caused conflicts among the simplest tribes” — but did not assign blame.

After his remarks, he met with two survivors. Although he was out of ear shot of reporters, Obama could be seen laughing and smiling with 91-year-old Sunao Tsuboi. He embraced Shigeaki Mori, 79, in a hug.

Later, Tsuboi told reporters he was struck by how Obama held his hand and listened carefully. He told the U.S. president he will be remembered as the one who “listened to the voice of survivors like us.”

“You should come visit Hiroshima from time to time and meet lots of people. That is what is important,” Tsuboi said.

Obama’s visit, which lasted just under two hours while most Americans were sleeping, was crafted for close scrutiny in Asia, a region he’s tried to put at the center of his foreign policy legacy. Obama and Abe strode together along a tree-lined path, past an eternal flame, toward a river that flows by the domed building that many associate with Hiroshima.

They earlier went to the lobby of the peace museum to sign the guest book: “We have known the agony of war. Let us now find the courage, together, to spread peace, and pursue a world without nuclear weapons,” Obama wrote, according to the White House.

The president’s call for a nuclear-free world was a long way from the optimistic rallying cry he delivered as young, newly elected president. Obama did not employ his campaign slogan — “Yes, we can” — as he did in a speech in Prague in 2009. Instead, the president spoke of diligent, incremental steps.

“We may not realize this goal in my lifetime but persistent effort can roll back the possibility of catastrophe,” he said. “We can chart a course that leads to the destruction of these stockpiles.”

Obama touched down in Hiroshima after completing talks with world leaders at an international summit in Shima, Japan. He was accompanied by Caroline Kennedy, the U.S. ambassador to Japan.

Hiroshima’s peace park is a poignant place, with searing images of the burnt, tattered clothing of dead children and the exposed steel beams on the iconic A-bomb dome. The skeletal remains of the exhibition hall have become an international symbol of peace and a place for prayer.

Han Jeong-soon, the 58-year-old daughter of a Korean survivor, was also at the park Friday.

“The suffering, such as illness, gets carried on over the generations — that is what I want President Obama to know,” she said. “I want him to understand our sufferings.”