Producer’s notebook: As reconstruction crawls, the spirit of Tacloban prevails

When I was first assigned to travel to the Philippines to see how the city of Tacloban was fairing half a year after Typhoon Haiyan ravaged the city and the surrounding areas, I kept getting flashbacks of those horrifying images in the days right after the storm hit. So many killed. So much destruction.

But when I started researching the recovery efforts, I saw headlines like “Philippines continues to make progress post-Typhoon Haiyan.” Many articles, especially those written by Filipino news outlets, seemed to portray a city that was pulling itself together.

When I stepped off the plane, however, a very different picture began to take shape. 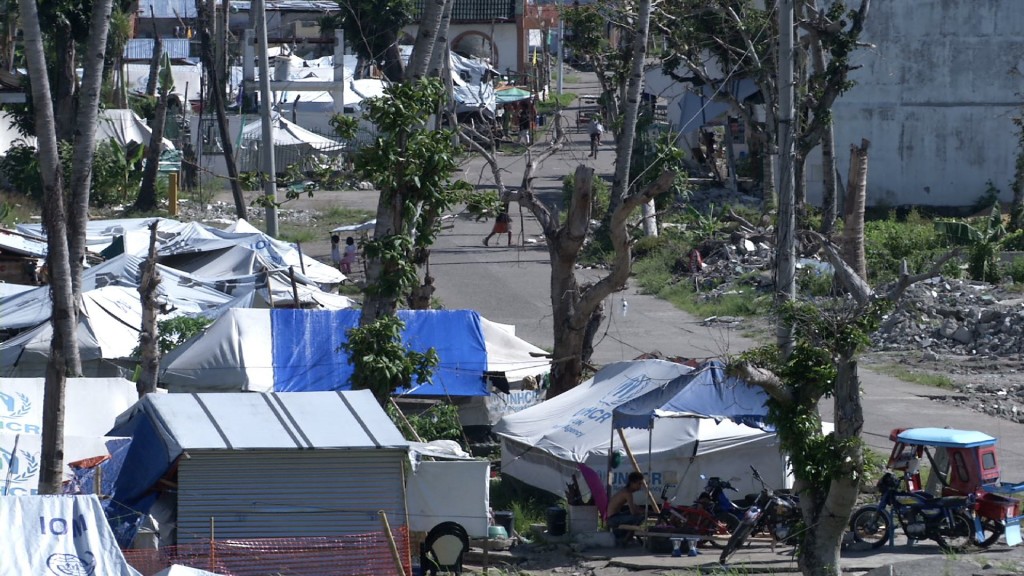 Tents handed out to citizens by the United Nations High Commissioner for Refugees line the streets of Tacloban. Photo by Brian Epstein/NewsHour

As we drove to the center of the city, the state of reconstruction seven months after the typhoon hit came into full view. In the sweltering heat, tens of thousands of Filipinos were still living in tents handed out by the United Nation’s refugee agency, and unsanitary living conditions abounds had created the threat of communicable diseases.

In the wake of disaster, we learned the Filipino government had promised to build 200,000 new homes in the typhoon zone, but in Tacloban, less than 200 had been completed at the time of our visit.

The loss of life was staggering. More than 6,000 people, many of them children, died when the typhoon struck. We learned that children are often vulnerable in storms since they can be easily swept away by the sheer strength of rushing water.

At a makeshift cemetery, I saw a white cross with a picture of a young boy not even one year old, named Shawn Andrei. My son, Luca, is six-and-a-half months old. In a parallel universe, Luca and Shawn could have been friends. 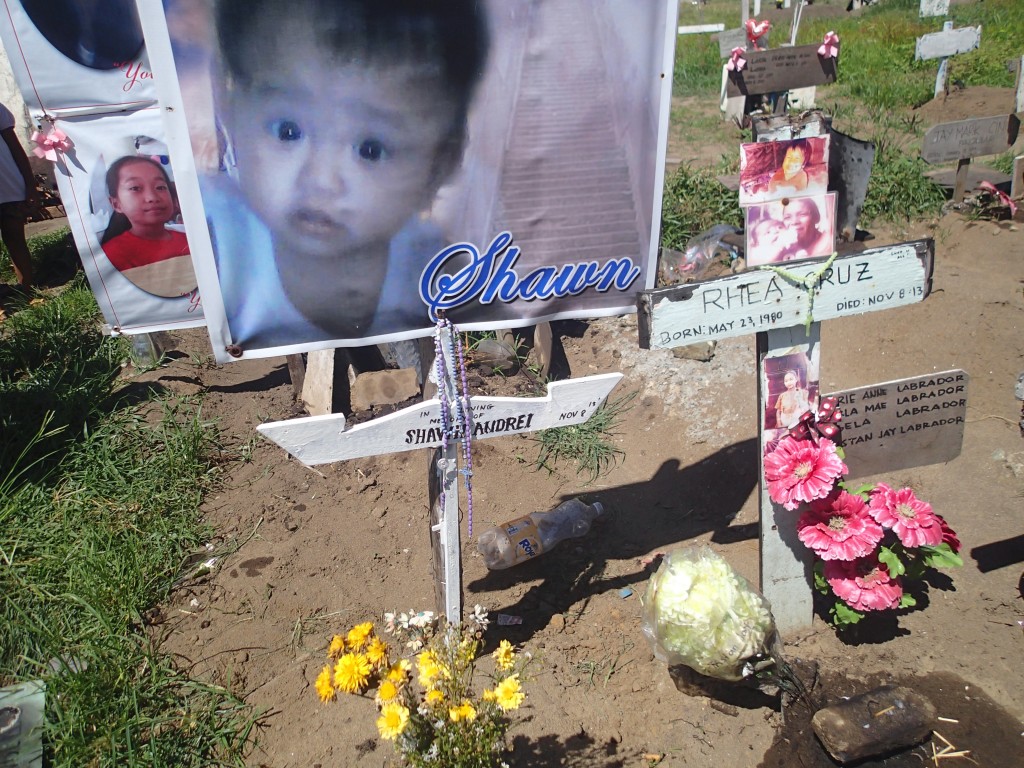 At a makeshift cemetery, graves of children who died in the storm surge after Typhoon Haiyan struck the city can be found. Photo by Brian Epstein/NewsHour

There were some signs of new life, though, as small business had reopened and the sound of labor workers hammering away could be heard in the distance. But much of the city seemed to be in a post-disaster limbo.

To date, the UN has received only about half of the $800 million in donations pledged by the international community for post-disaster relief. Promises are easy to make when the world’s attention is focused on a disaster. And they’re just as easy to forget when the cameras disappear and fatigue sets in.

As a journalist, it’s sometimes hard not to succumb to the grief of it all. But if you simply focus on the loss, you miss the spirit of the Filipino people. There’s a saying here: “Bahala-na.” It roughly translates to “we’re determined to do the best we can, the rest we leave up to faith.” 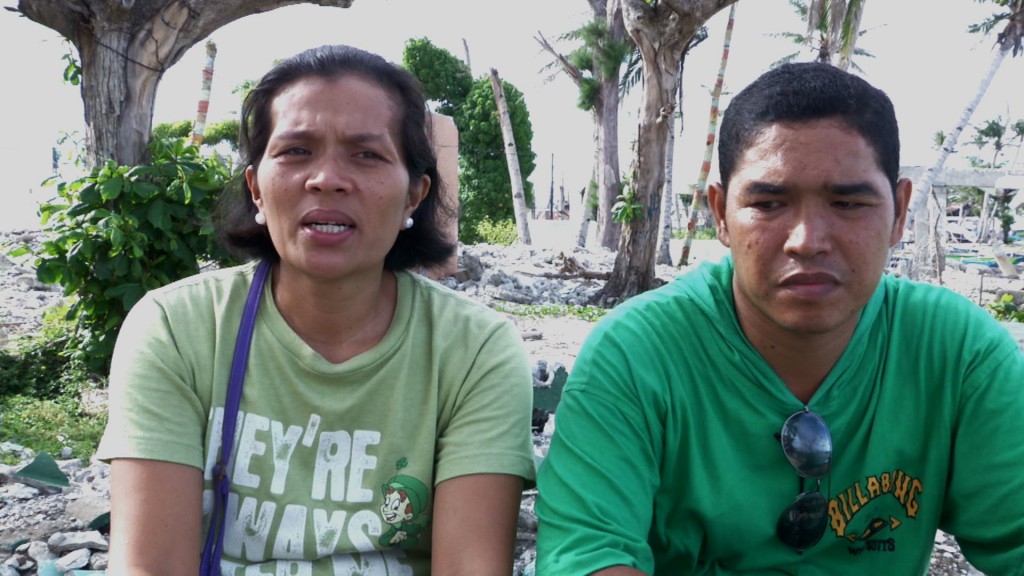 Delor and Dante Linggo, who lost three children and 32 relatives in the typhoon, have set up a soup kitchen on the weekends in Tacloban. Photo by Brian Epstein/NewsHour

No one we met on our travels embodied that spirit more than Delor and Dante Linggo, a couple who lost three of their four children and 32 relatives in the storm. Incredibly, they’ve channeled their grief into helping others. At a former seaside resort decimated by the storm, they set up a soup kitchen on the weekends, helping to feed the children of Tacloban. 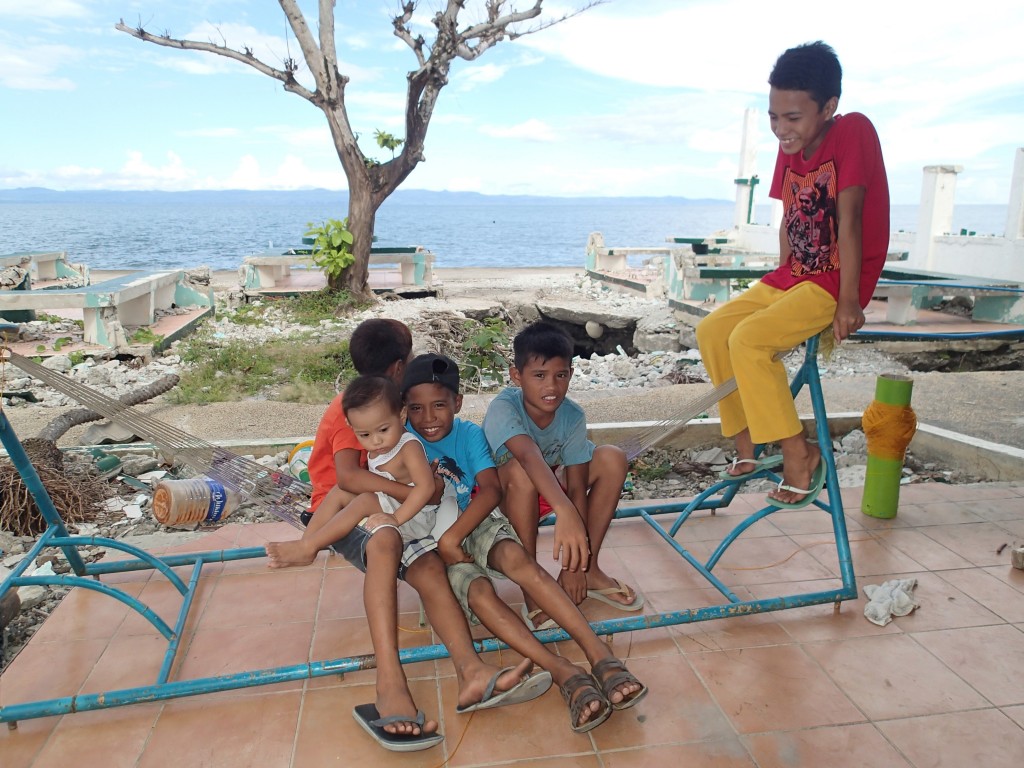 Children in Tacloban congregate at a former seaside resort, destroyed by the storm surge of the typhoon. Photo by Mark Litke/NewsHour

It’s something you see a lot in the city: Filipinos taking care of each other. Delor told us that they do it for the “memory of our children,” who are buried together in front of their home, just feet from the sea that took their lives. 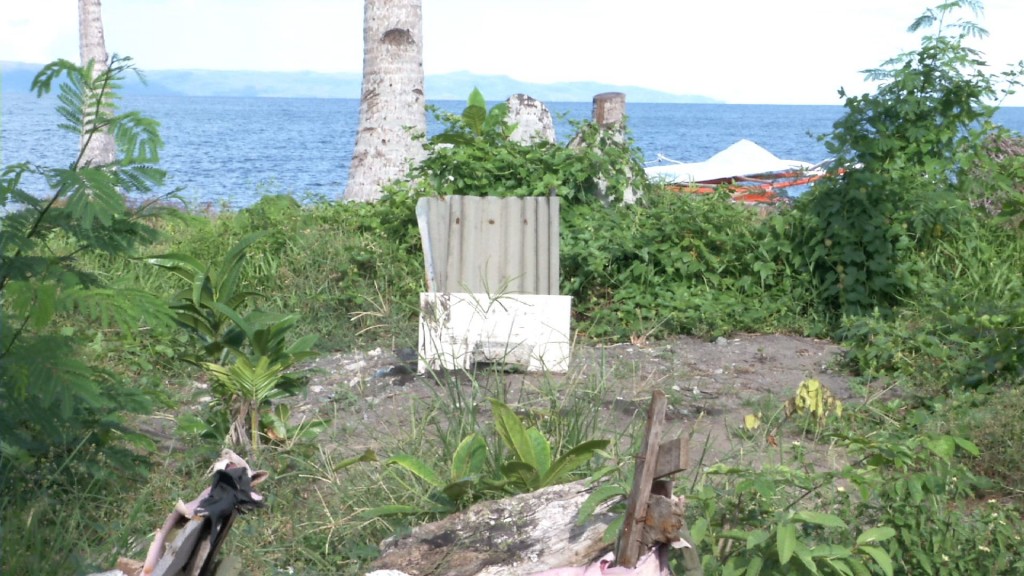 A makeshift gravestone marks the spot where Delor and Dante Linggo’s three children are buried. Photo by Brian Epstein/NewsHour

The couple decided not to put their children’s names on the gravestone that marks the site, because, they said, the memorial was for them and them alone.

As we prepared to leave the Philippines, I wondered: Would I react with as much grace and generosity of spirit if my family and I sustained such a tragedy? Honestly, I just don’t know.

Left: Citizens of Tacloban sort through the rubble still left in the wake of Typhoon Haiyan. Photo by Brian Epstein/NewsHour