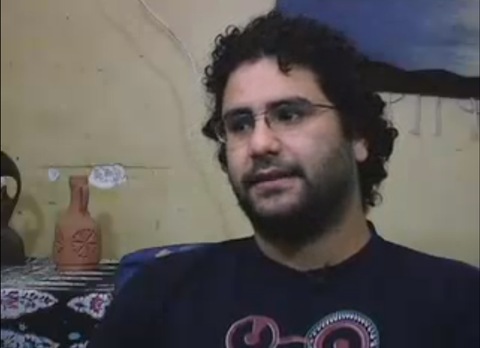 Abd El Fattah’s wife, Manal Hassan, told the Egyptian independent news site Mada Masr on Thursday that armed men broke into their house in the middle of the night, and “began confiscating the family’s computers and mobile phones.”

According to Hassan, when Abd El Fattah asked to see the arrest warrant, the men “beat him and slapped [her] across the face.” Last Tuesday, Abd El Fattah was accused of organizing a protest against military trials for civilians. Authorities said his actions were in violation of a new law that restricts any street protests without the government’s permission.

Egypt’s prime minister said the law is necessary so the right to protest can be met with “a sense of responsibility so it won’t damage security or terrorize or assault establishments.”

The new law prompted thousands to take to the streets Tuesday — and dozens were reportedly arrested.

Abd El Fattah denied calling for the protest but announced his opposition to the law. He was also charged with “thuggery and incitement of violence” according to Al Ahram online.

I first met Abd El Fattah in 2007 while reporting on the state of political activism under President Hosni Mubarak.

Abd El Fattah had been imprisoned under the regime and spoke to me about his experience.

Abd El Fattah spoke with Mona Iskander for NOW on PBS in 2007.

Much of our conversation focused on the risks he had taken in the name of freedom of speech.

“You always know in theory the kind of price you might have to pay” he said. “But now I know more about it, especially after seeing what others went through.”

At the time, Abd El Fattah and his wife were on the front line of a small group of activists who harnessed the power of social media in Egypt to push democracy.

But through each political transition, activists like Abd El Fattah have continued to face the ire of those in power.

Abd El Fattah was arrested in 2011 by the Supreme Council of the Armed Forces and remained detained for two months. And earlier this year, he faced charges under President Mohamed Morsi.

According to Mada Masr, Abd El Fattah is currently being held at the Central Security Forces barracks outside of Cairo pending investigations.