Protesters Attack U.S. Embassies Across Africa and Middle East as Anger Boils Over 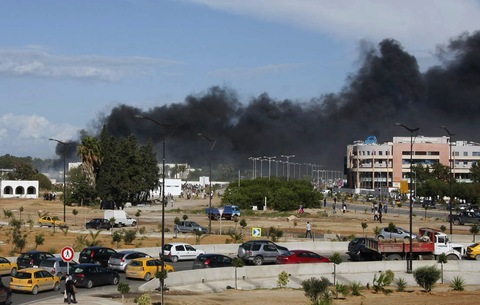 Smoke rises from the US embassy building in Tunis during a protest against a film mocking Islam on September 14, 2012. Photo by Fethi Belaid/AFP/Getty Images.

Thick black smoke billowed from the U.S. Embassy in Tunisia’s capital of Tunis Friday as protesters breached its security wall, set fire to cars and trees and broke windows inside the compound. Reuters reported that Tunisian police opened fire on the protesters, leaving three dead and wounding at least 28, but it was unclear whether live rounds or rubber bullets had been used.

Meanwhile, anti-American demonstrations and intense clashes with police broke out at U.S. embassies and businesses in Sudan, Egypt, Yemen, Nigeria and Lebanon, among others. An American-made film that insults the Prophet Mohammed was widely blamed for inciting the violent protests. 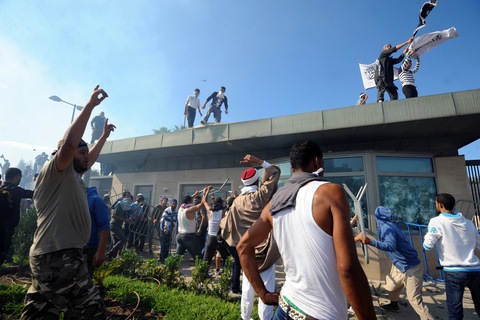 The demonstrators at the U.S. Embassy in Tunis, acting aggressively, managed to clamber over one of the walls round the mission, near the car park where several vehicles had been set ablaze, the photographer said. Photo by Fethi Belaid/AFP/Getty Images.

Also in Yemen Friday, an elite squad of 50 U.S. Marines arrived in the capital of Sanaa to reinforce Yemeni security forces battling some 2,000 protesters with tear gas outside the U.S. embassy. On Wednesday a similar team was dispatched to Tripoli, Libya, after a deadly attack on the U.S. consulate in Benghazi Tuesday night claimed the lives of U.S. Ambassador Chris Stephens and three other Americans. President Obama and Secretary of State Hillary Clinton met their bodies at Andrews Air Force Base in Maryland Friday afternoon.

Clinton and others have condemned both the violence and the film believed to have caused it. On Thursday’s broadcast Jeffrey Brown asked Rebecca Keegan of The Los Angeles Times what’s known about the movie and its producer, Nakoula Basseley Nakoula.

For more on the protests, The New York Times has this roundup of clashes; Peter Hessler of the New Yorker penned this dispatch from Cairo; Erin Cunningham of NewsHour Partner GlobalPost wrote this piece on the roots of anger and misunderstanding the film has exposed.

Yesterday, in a letter published by the New York Times, Muslim Brotherhood Deputy Editor Khairat El-Shater expressed his regret over the violence in Egypt. On Twitter El-Shater also issued a similar statement to the U.S. Embassy in Cairo, but embassy staff questioned its sincerity by pointing out some contradictory messages on the Muslim Brotherhood’s Arabic Twitter feeds.

Tune in to Friday’s NewsHour broadcast for more on the demonstrations and their repercussions.