Protests erupt as Turkish government cracks down on popular newspaper

Turkish residents took to the streets of Istanbul Saturday for a second day to protest the government takeover of the country’s most widely circulated newspaper.

Violent clashes between riot police and hundreds of supporters, including many employees, of the newspaper Zaman continued as bloodied and injured protesters were met with a rubber bullets, water canons and tear gas.

On Friday, hours after a Turkish court ruled control of Zaman would be wrested from its owners and handed to court-appointed trustees, police broke through a gate at the newspaper’s headquarters in Istanbul to allow a new management team to enter the building, also forcing employees to leave the premises.

The trustees will oversee the Feza Media Group, which along with Zaman daily also includes an English-language newspaper and Today’s Zaman and the Cihan news agency.

“Today, we are experiencing a shameful day for media freedom in Turkey,” said Sevgi Akarçeşme, Today’s Zaman Editor-in-Chief. “Our media institutions are being seized.”

The court decision was handed down after a prosecutor claimed the newspaper, which has links to a moderate United States cleric Fethullah Gulen, was attempting to oust the current government, led by Turkish President Recep Tayyip Erdogan. Gulen has been critical of the government.

Turkey has been widely criticized for clamping down on press freedoms. The country’s media is largely controlled by media favoring the president’s administration.

On Friday, White House Spokesperson John Kirby said Turkey’s latest crackdown on the press and others was “troubling.” 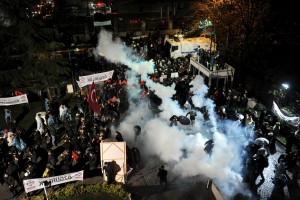 Riot police use tear gas to disperse protesting employees and supporters of Zaman newspaper at the courtyard of the newspaper’s office in Istanbul, Turkey, late March 4, 2016. Selahattin Sevi/Zaman Daily/Reuters

“We urge Turkish authorities to ensure their actions uphold the universal democratic values enshrined in their own constitution, including freedom of speech and especially freedom of the press,” Kirby said. “In a Democratic society, as I’ve said many, many times, critical opinions should be encouraged, not silenced.”

The European Union also denounced the news group’s takeover, while the European Commission said in a statement the move may hurt Turkey’s chance of entering the EU.

“Any country, and in particular those negotiating EU accession, needs to guarantee fundamental rights, including freedom of expression, and due judicial process, in line with the European Convention on Human Rights,” the statement read, according to Reuters.

Left: A man lies on the ground as others run as Turkish anti-riot police officers use tear gas to disperse supporters in front of the headquarters of the Turkish daily newspaper Zaman in Istanbul on March 5, 2016. Protests erupted after Turkish authorities seized the newspaper's headquarters in a midnight raid. Photo by Ozan Kose/Getty Images.