Puerto Rico has asked for more aid in the wake of Hurricane Maria. Will the federal government provide it?

When Hurricane Maria made landfall in Puerto Rico last week as a Category 4 storm, it was the strongest storm the U.S. territory had seen in decades.

As the storm moves slowly northward, island officials have been working to coordinate rescue efforts and assess the devastation to the island’s infrastructure.

The crisis grips an island whose population is larger than that of 21 U.S. states. So far, 10 deaths have been attributed to the hurricane, and officials expect that number to rise. The island’s energy infrastructure has been crippled, leaving millions without power since the storm hit. And since the area’s telecommunications network remains severely limited, rescue officials have no good contact with far-flung communities on the island.

“This is a game changer,” Governor Ricardo Rosselló told CNN on Monday. “We need to prevent a humanitarian crisis occurring in America,” he added, pressing Congress to pass additional relief aid for Puerto Rico.

The damage so far 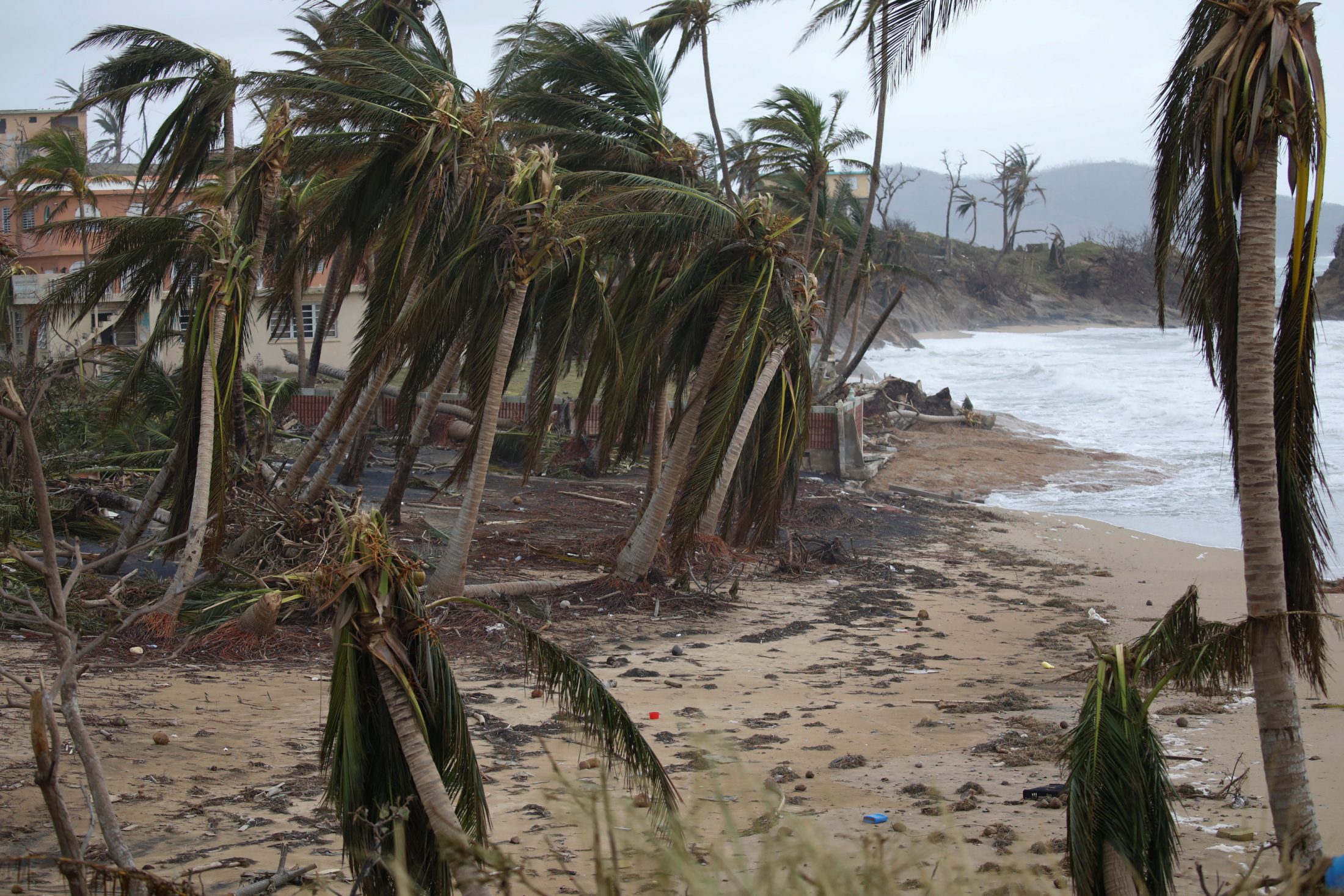 Broken palm trees are seen after the area was hit by Hurricane Maria in Yabucoa, Puerto Rico. Photo by Carlos Garcia Rawlins/Reuters

Amid the governor’s assurances to the island’s residents that more resources will come, Washington Post reporters noted a dearth of gasoline, cash, gas and water for residents in Puerto Rico. And when villagers see outsiders, they often ask, “Are you FEMA?” the Post reported.

CNN reported that three of the hospitals they visited had no running water and supplies that would likely run out in a few days. Engineers inspected the 90-year-old Guajataca Dam, which cracked as the hurricane roared through, after officials feared the structure could collapse any minute. Thousands of residents nearby were asked to evacuate, and the dam appears to remain a danger today.

Hurricane Maria also decimated Puerto Rico’s agricultural industry, according to preliminary estimates from the island’s Agriculture Department. The hurricane wiped out 80 percent of the island’s crops, primarily affecting its banana, plantain and coffee fields, which will lead to an $780 million loss in agriculture yields. By comparison, the New York Times notes: “Hurricane Georges in 1998 wiped out about 65 percent of crops and Hurricane Irma, which only grazed the island, took out about $45 million in agriculture production.”

Jessica Ríos Viner, a reporter with the newspaper El Nuevo Día, joins NewsHour’s Hari Sreenivasan to talk about the devastation via Skype.

“We are U.S. citizens that just a few weeks ago went to the aid of other U.S. citizens even as we’re going through our fiscal downturn and as we were hit by another storm,” Governor Ricardo Rosselló told the Post. “Now, we’ve been essentially devastated. Complete destruction of the power infrastructure, severe destruction of the housing infrastructure, food and water are needed. My petition is that we were there once for our brothers and sisters, our other U.S. citizens, now it’s time that U.S. citizens in Puerto Rico are taken care of adequately, properly.”

What lawmakers are saying 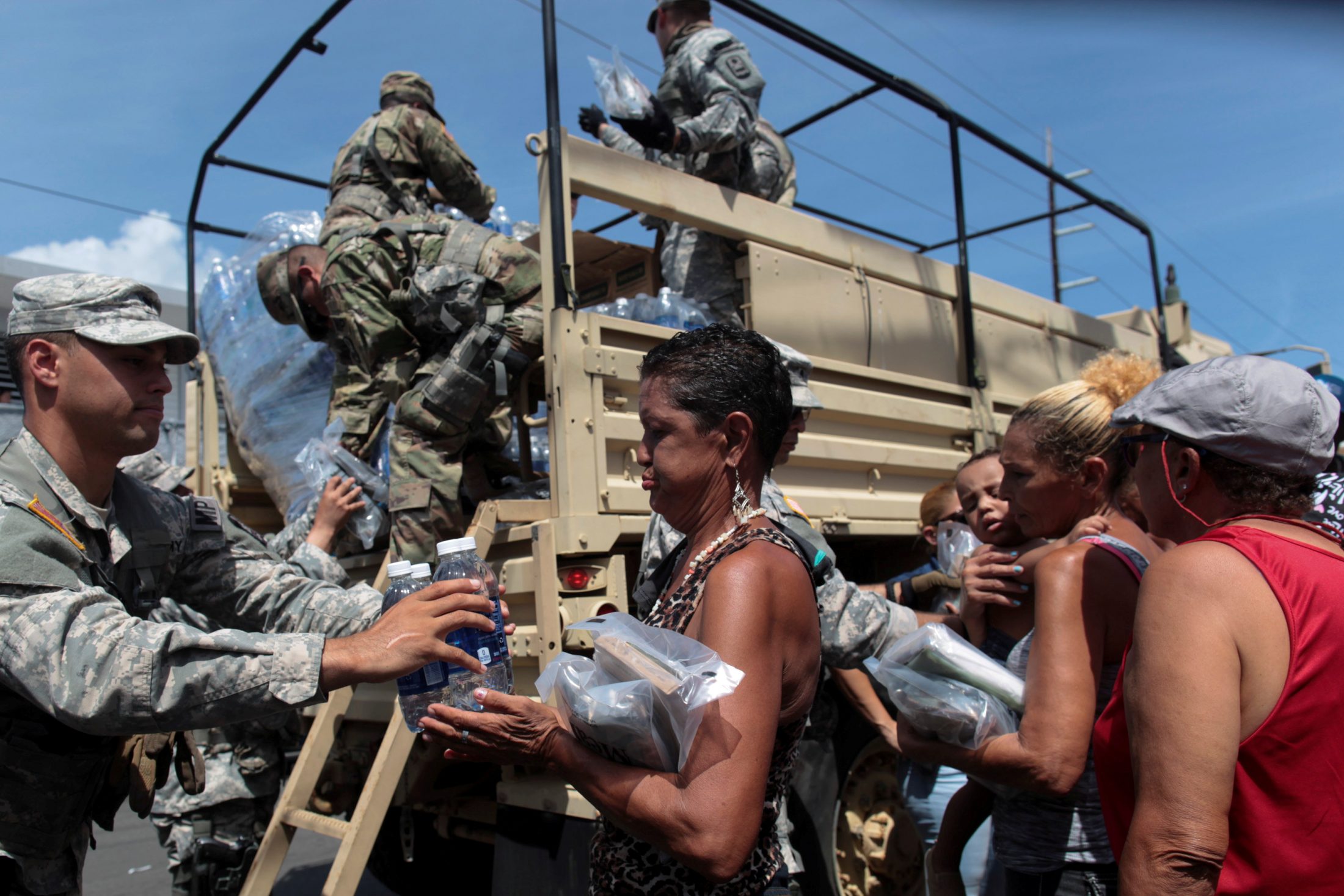 President Donald Trump has yet to formally urge Congress to work on legislation that would funnel more money for relief in Puerto Rico. The Washington Post noted that the president, since Friday, spent more time criticizing athlete protests than on drawing more attention to the looming crisis on U.S. territory.

On Sept. 14, Trump promised to visit Puerto Rico and the Virgin Islands, both devastated by hurricanes. He mentioned the would-be trip again last week, but a date wasn’t immediately set. CNN reported that this was partly due to infrastructure concerns on the island. Today, after days of criticism over his administration’s response to Puerto Rico, Trump announced that he would visit the island next Tuesday.

If Trump makes the trip, he would only be the second U.S. president to visit the island in four decades, PBS NewsHour’s Daniel Bush noted. Former President Barack Obama traveled to Puerto Rico in 2011.

White House Press Secretary Sarah Huckabee Sanders, however, downplayed the concern that the federal response to the aftermath in Puerto Rico has been flatfooted.

“The federal response has been anything but slow,” Sanders told reporters Monday, saying that the U.S. has been supplying assistance “as quickly as possible.”

Sanders said the Trump administration has fought for an “unprecedented” billions of dollars in federal aid. She added that two federal officials are on the island as of Monday for a deeper assessment of what long-term needs still need to be met.

“Once we have a greater insight into the full assessment of damage, then we’ll be able to determine what additional funds are needed, but we’re still in kind of that fact-finding process,” she said.

On Monday, congressional leaders promised support to Puerto Rico. House Speaker Paul Ryan said communities there would “have what they need” after he and the rest of Congress work with the Trump administration to push something through.

“Congress is working with the administration to ensure necessary resources get to the U.S. territory,” he said. “Our fellow citizens in Puerto Rico remain in our prayers as we make sure they have what they need.”

House Minority Leader Nancy Pelosi also urged the president today to deploy more aid to the island, saying that the people of Puerto Rico and the Virgin Islands “deserve to know that their government will be there for them, without question or hesitation.”

How quickly can Congress act? 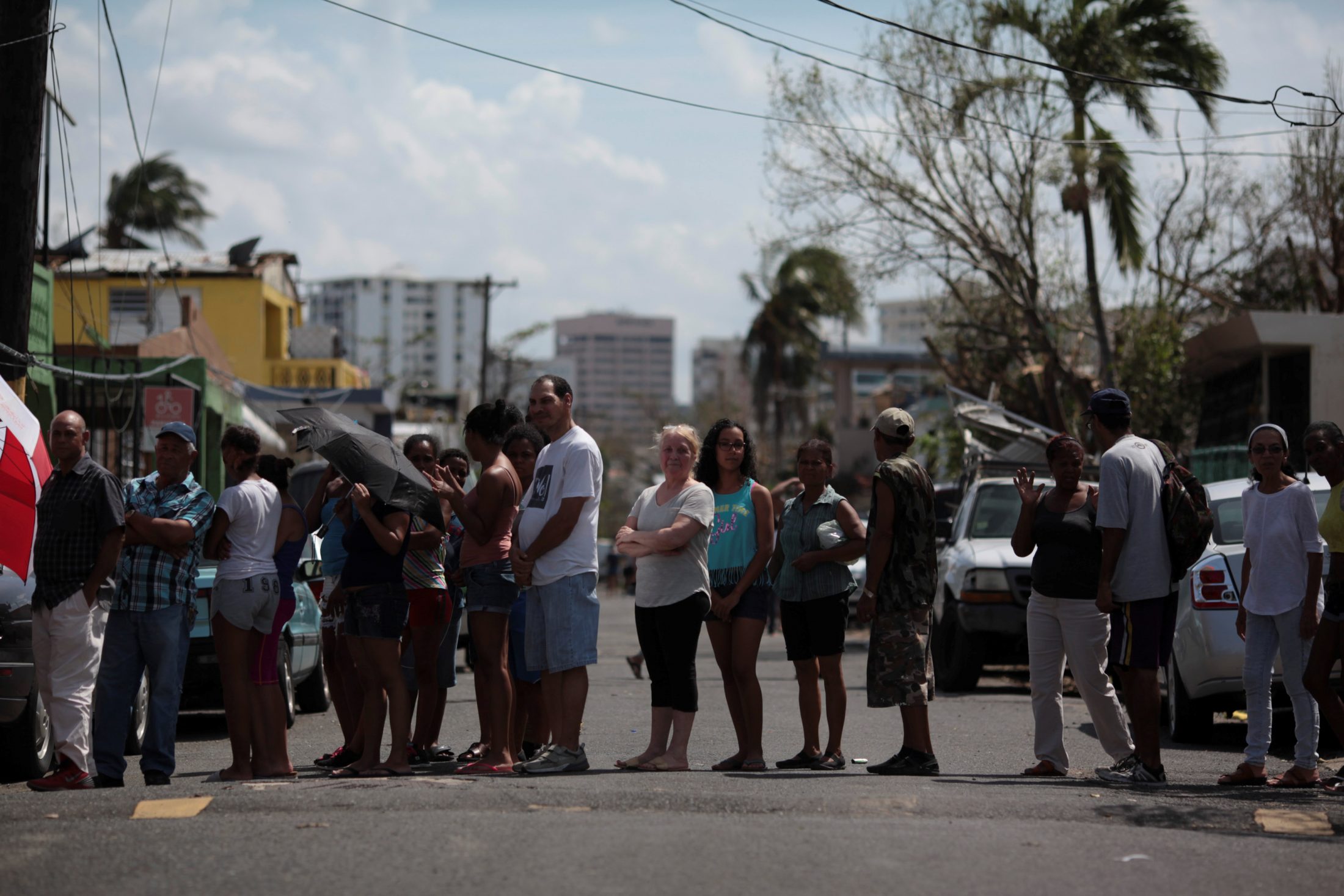 People wait in line for relief items to be distributed, after the area was hit by Hurricane Maria in San Juan, Puerto Rico. Photo by Alvin Baez/Reuters

Congress previously approved $15 million in hurricane relief following the devastation of Hurricane Harvey. But in the wake of Maria, which has left most of the 3.4 million people of Puerto Rico in need of assistance, additional relief seems like a natural progression.

But how quickly can Congress act?

Senior congressional aides provided the Post with a rough outline of expectations. The aides told the newspaper Sunday that they didn’t expect the Federal Emergency Management Agency to push for more federal disaster relief until mid-October, which means “the agency thinks it has enough money at its disposal to cover major disaster recovery operations nationwide.”

Another aide to the House Appropriations Committee echoed that timeline for new relief funding to the Associated Press.

However, aides also told the Post that Congress would need a formal request from the Trump administration to move forward with legislation related to hurricane relief. That does not appear to have come yet.

In the meantime, Colin Wilhelm of Politico tweeted that the Puerto Rican governor said that the “island’s yet to receive all search & rescue & humanitarian aid its requested.”

Spoke to Puerto Rico's governor earlier tonight. He said the island's yet to receive all search & rescue & humanitarian aid its requested.

The governor has called on the Pentagon to provide more assistance for law enforcement and transportation on the ground, saying that current efforts are being strained.

FEMA tweeted that it has more than 10,000 federal staff on Puerto Rico and the Virgin Islands to assist with rescue efforts and restoring power. Images coming out of the island have made people question whether this is enough.

"Do you understand this is a humanitarian crisis?" 1,000 people waiting in line to leave Puerto Rico – sleeping children are sweating pic.twitter.com/EUM1pwtm72

“I don’t think anyone was prepared for this,” Jessica Ríos Viner reporter of the newspaper El Nuevo Día told NewsHour Weekend. “There are areas where they’re saying it could take a year because they have to rebuild everything, that it could take a year to get some power.”

Left: Irma Torres poses for a picture at her damaged house after the area was hit by Hurricane Maria in Yabucoa, Puerto Rico. Photo by Carlos Garcia Rawlins/Reuters