Putin says he’s open to talks with Trump, but warns against using force on Iran

The Russian leader also strongly warned the United States against using force on Iran, saying it will trigger a “catastrophe.”

Trump said he would meet with Putin on the sidelines of next week’s G-20 summit in Osaka, Japan, but the Kremlin noted that the White House hasn’t formally requested the meeting yet.

“Dialogue is always good and necessary … If the American side shows interest in that, we are naturally ready for a dialogue as much as our partners are.”

“Dialogue is always good and necessary,” Putin said. “If the American side shows interest in that, we are naturally ready for a dialogue as much as our partners are.”

He added that Russia and the U.S. particularly need to focus on arms control issues, including the future of the New Start arms treaty that is set to expire in 2021.

Putin charged that U.S.-Russian relations have become hostage to the U.S. domestic political infighting ahead of the 2020 U.S. presidential election, clouding prospects for their improvement.

“Our relations aren’t going to be easy, given the fact that part of the American establishment is speculating on Russia-U.S. relations, trying to muddy the waters to make some gains and inventing all kinds of fake (news),” he said.

The Russian leader has denied meddling in the 2016 U.S. election to help Trump win despite the evidence to the contrary uncovered by U.S. special counsel Robert Mueller.

“Even if the president wants to take some steps forward, to discuss something, there are plenty of restrictions coming from other state structures,” Putin said.

Putin was questioned on a report by The New York Times about U.S. cyberattacks on Russian energy infrastructure, which Trump has denounced as an “act of treason” in an angry tweet this week. Putin said Russia takes the matter seriously.

“I heard about The New York Times article and saw the reaction of the president, who called them traitors,” Putin said. “I don’t know how we should interpret it, whether they uncovered true information or it was a fake. In any case, we need to react to that (but) we must understand what was it.” 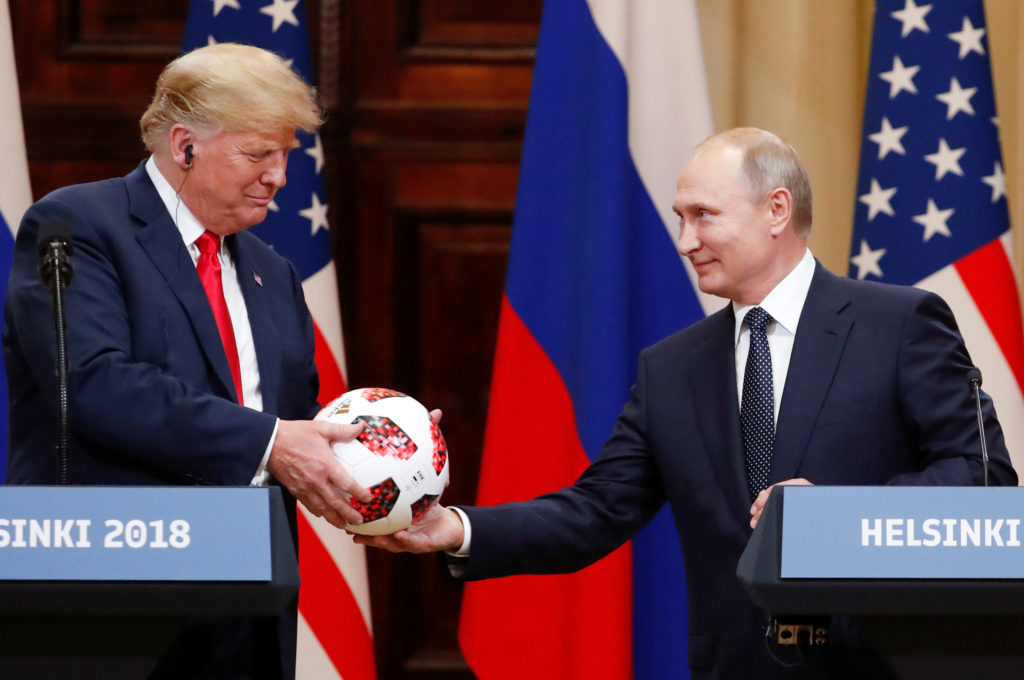 Russian news anchors claimed the call center repeatedly came under cyberattacks during the show but they were successfully fended off.

During the show, Putin warned the U.S. that an attack on Iran would have enormous consequences, adding it would trigger an escalation of hostilities across the region.

“It would be a catastrophe for the region as a minimum,” he said,

Tensions have been mounting recently over last week’s attacks on tankers near the Strait of Hormuz, assaults that Washington has blamed on Iran. Iran has denied the accusations.

Putin noted that Iran has abided by the terms of a landmark nuclear deal despite the U.S. withdrawal from the accord, adding that he considers U.S. sanctions against Iran unfounded.

Asked if Russia could be willing to negotiate a “grand bargain” with the U.S. on Syria and other issues, Putin responded by saying that “we aren’t trading in our allies, our interests and our principles.”

He added, however, that it’s necessary to discuss regional issues with various players, including the United States.

Answering a question about Ukraine, Putin criticized the country’s new president, Volodymyr Zelenskiy, for recent comments in which he refused to negotiate directly with the Moscow-backed separatists who have overrun large swathes of eastern Ukraine. A 2015 peace deal called for direct negotiations between the Ukrainian government in Kiev and the separatists with the mediation of Russia, France and Germany.

Putin said the “political will of the Ukrainian leadership” is necessary to stop the hostilities between Ukrainian troops and Russia-backed insurgents that have killed more than 13,000 people since 2014. Putin pointed out that Zelenskiy’s campaign promises to bring peace to the east and stop the fighting haven’t yet been fulfilled.

The tightly-choreographed call-in provided a rare opportunity for Russians across the vast country to take their grievances to the very top, so it was dominated by complaints about low wages, potholed roads, decrepit schools, overwhelmed hospitals and other social issues.

More than 1.5 million people sent in questions by phone, video or email.

WATCH: All of the Mueller report’s major findings in less than 30 minutes

Facing a litany of complaints about low living standards, Putin promised to boost wages and pensions and boost social programs. He noted that Russia has been hurt by a drop in energy prices worldwide and by international sanctions, but added that the economy has improved.

Putin acknowledged that U.S. and the European Union sanctions have cost Russia an estimated $50 billion since 2014, but he claimed that EU nations have suffered even greater damage because of the restrictions. It was not immediately possible to verify such a claim.

The Russian leader said the sanctions have encouraged Moscow to launch its own production of ship engines and other key industrial products and develop its agricultural sector. He said Russia’s agricultural exports topped $25 billion last year and will keep growing.

He noted U.S. sanctions against the Chinese telecommunications giant Huawei, describing it as part of U.S. efforts to “contain the development of China as a global power.”

“The same thing is happening with regard to Russia and it will keep going. So if we want to win a place under the sun, we simply need to get stronger, primarily in the economic sphere,” he said.

Nataliya Vasilyeva contributed to this report.