KYIV, Ukraine (AP) — Russia launched nighttime attacks on several Ukrainian cities, Ukrainian officials said Saturday as they and Moscow blamed each other for the deaths of dozens of Ukrainian prisoners of war in a separatist-controlled area of the country’s east.

Ukrainian President Volodymyr Zelenskyy said the United Nations and the International Committee of the Red Cross have a duty to react after shelling of a prison complex in Donetsk province killed the POWS.

“It was a deliberate Russian war crime, a deliberate mass murder of Ukrainian prisoners of war,” Zelenskyy said in a video address late Friday. “There should be a clear legal recognition of Russia as a state sponsor of terrorism.”

Both sides alleged the attack on the prison was premeditated and intended to silence the Ukrainian prisoners and to destroy evidence, including of possible atrocities. 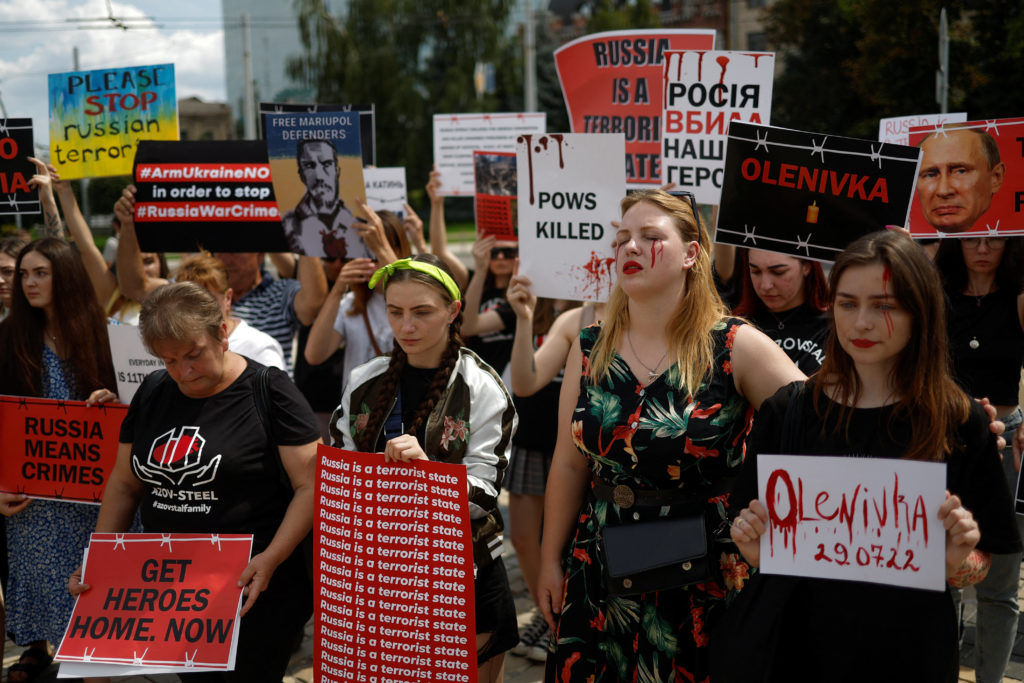 Relatives of defenders of the Azovstal Iron and Steel Works in Mariupol hold a rally demanding to recognise Russia as a state sponsor of terrorism after killing Ukrainian prisoners of war (POWs) in a prison in Olenivka, outside of Donetsk, as Russia’s attack on Ukraine continues, in Kyiv, Ukraine July 30, 2022. Photo by Valentyn Ogirenko/Reuters.

The Ukrainian military, however, denied making any rocket or artillery strikes in Olenivka. It accused the Russians of shelling the prison to cover up the alleged torture and execution of Ukrainians there.

Separatist authorities and Russian officials said the attack killed 53 Ukrainian POWs and wounded another 75. Russia’s Defense Ministry on Saturday issued a list naming 48 Ukrainian fighters, their ages ranging from 20 to 62, who died in the attack; it was not clear if the ministry had revised its fatality count.

The International Committee of the Red Cross, which has organized civilian evacuations in the war and worked to monitor the treatment of POWS held by Russia and Ukraine, said it has requested access to the prison “to determine the health and condition of all the people present on-site at the time of the attack.”

“Our priority right now is making sure that the wounded receive life-saving treatment and that the bodies of those who lost their lives are dealt with in a dignified manner,” the Red Cross said in a statement.

Elsewhere in eastern Ukraine, Russian rockets hit a school building in Kharkiv, the country’s second-largest city, overnight, and another attack occurred about an hour later, Mayor Ihor Terekhov said Saturday. There were no immediate reports of injuries.

The bus station in the city of Sloviansk also was hit, according to Mayor Vadim Lyakh. Sloviansk is near the front line of fighting as Russian and separatist forces try to take full control of the Donetsk region, one of two eastern provinces that Russia has recognized as sovereign states.

In southern Ukraine, one person was killed and six injured in shelling that hit a residential area in Mykolaiv, a significant port city, the region’s administration said Saturday on Facebook. 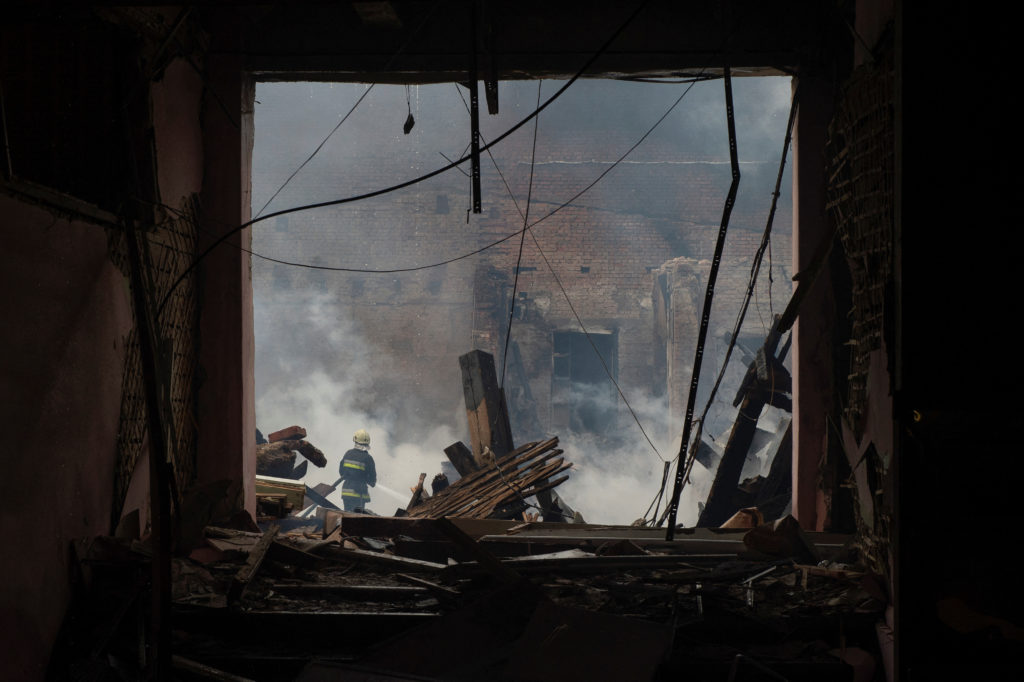 A firefighter works at a site of a professional college that was heavily damaged by a Russian missile strike, as Russia’s attack on Ukraine continues, in Kharkiv, Ukraine July 30, 2022. Photo by Sofiia Gatilova/Reuters.

Friday’s attack on the prison reportedly killed Ukrainian soldiers who were captured in May after the fall of Mariupol, another port city where troops and the Azov Regiment of the national guard famously held out against a monthslong Russian siege.

On Saturday, an association of Azov fighters’ relatives held a demonstration outside Kyiv’s St. Sophia Cathedral and issued a statement calling for Russia to be designated a terrorist state for violating the Geneva Convention’s rules for the treatment of war prisoners.

Moscow opened a probe into the attack on POW prison, sending a team to the site from Russia’s Investigative Committee, the country’s main criminal investigation agency.

The Institute for the Study of War, a think tank based in Washington, said the competing claims and limited information prevented assigning responsibility for the attack but that the “available visual evidence appears to support the Ukrainian claim more than the Russian.”

On the energy front, Russia’s state-owned natural gas corporation said Saturday it has halted shipments to Latvia because of contract violations. Gas giant Gazprom said the shipments were stopped because Latvia broke “terms for extraction of gas.” It did not elaborate.

The statement likely referred to a refusal to meet Russia’s demand for gas payments in rubles rather than other currencies. Gazprom has previously suspended gas shipments to other EU countries, including the Netherlands, Poland and Bulgaria, because they would not pay in rubles.

EU nations have been scrambling to secure other energy sources, fearing that Russia will cut off more gas supplies as winter approaches.

Left: Burnt bodies of detainees lie covered following the shelling at a pre-trial detention center in the course of Ukraine-Russia conflict, in the settlement of Olenivka in the Donetsk Region, Ukraine July 29, 2022. Photo by Alexander Ermochenko/Reuters