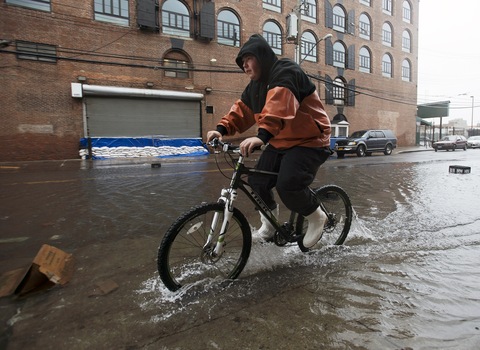 A man makes his way through flood waters on a bike in the Red Hook neighborhood of Brooklyn in New York, October 29, 2012. Photo by Keith Bedford/ REUTERS.

NEW YORK — If you face the right way when you stand at the end of the Coffey Street Pier in the Red Hook neighborhood of Brooklyn, you can fool yourself into thinking you’re in some idyllic Dutch or English port town, nowhere near the largest city in the U.S. So it isn’t surprising that a hurricane the size of Sandy could cause widespread damage.

But turn your head even slightly and you’ll catch the Statue of Liberty staring right at you; turn a bit more and the skyline of Lower Manhattan rears into view. By then, it’s clear that New York City is every bit as vulnerable as those idyllic ports you’d just been imagining.

It may be easier to get to the neighborhood by water than by land. There’s no subway here, and limited bus service. It took me an hour to find a cab driver who was willing to burn the gas it would take to get me and cameraman/editor Eric O’Connor there. (The driver I ultimately found had avoided long lines at New York’s shortage-stricken gas stations by driving to Connecticut to fill up.)

Upon arriving in Red Hook, it’s hard to tell that the neighborhood was hit hard. There are no collapsed buildings, none of the post-apocalyptic devastation that one sees on the south shore of Staten Island or the Rockaway Peninsula in Queens. The basics of infrastructure here are still intact. And some blocks — even close to the water — were spared by virtue of their being a dozen or so feet higher than the rest of the neighborhood.

Perhaps because of its isolation, Red Hook is a remarkably close-knit and neighborly community. Sandy tested that social infrastructure but did not damage it. Even though half the neighborhood lacks power and hundreds of residents have lost piles of personal possessions and family memorabilia, not one of the dozens of Red Hook residents we interviewed over two solid days in the area said that moving farther from the waters of New York Bay had crossed their minds even once.

Rick Karr is a correspondent for PBS’s “Need to Know” who is based in New York.

Voting underway as Nevada Democrats weigh in on 2020 fight