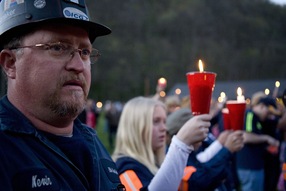 Updated 11:30 a.m. ET | The first comprehensive investigative report on the disaster at Upper Big Branch Mine in West Virginia last year, which killed 29 miners, finds that the explosion could have been prevented and was the result of a corporate culture at the mine “in which wrongdoing became acceptable, where deviation became the norm.”

The 130-page report released Thursday found that the explosion was the result of a long series “of failures of basic safety systems” to protect the lives of miners at Massey Energy, which owned the mine. The investigation, which was conducted for the state of West Virginia by former federal mine safety chief J. Davitt McAteer and an independent team of seven others, said the company had a ventilation system that did not adequately ventilate the mine, allowing methane gases to build up. Moreover, coal dust standards were not met, providing the “fuel that allowed the explosion to propagate through the mine,” the report stated. Water sprays on equipment were not maintained and as a result, “a small ignition could not be quickly extinguished.”

Read the report in its entirety below:


The report — which takes a very tough tone — also found major fault with the government oversight of Massey and other mine operators. In a section on federal and state regulators, McAteer and his team write that the U.S. Mine Safety and Health Administration (MSHA) “failed to use all the tools at its disposal to ensure the company was compliant with federal laws,” including following up warnings about safety problems and issuing tough penalties.

“Looking just at the numbers, federal officials were kept busy at UBB (Upper Big Branch),” the report states. “Inspectors spent 1,854 hours at the mine in 2009, nearly twice the time as in 2007. During 2009, they wrote 515 citations and orders for safety violations, including 48 withdrawal orders for repeated significant and substantial (S&S) violations. … Despite the fact that the Upper Big Branch mine was cited dozens of times in theyear preceding the disaster for violating ventilation plan requirements, MSHA never cited Upper Big Branch for a flagrant violation.”

The report includes a comprehensive timeline of the disaster itself and the moments leading up to it, the efforts to save the miners, handwritten notes from employees discussing problems with equipment and safety codes and extensive sections on the corporate culture at Massey — as well as lack of government oversight. We’ll have more on Thursday’s NewsHour.